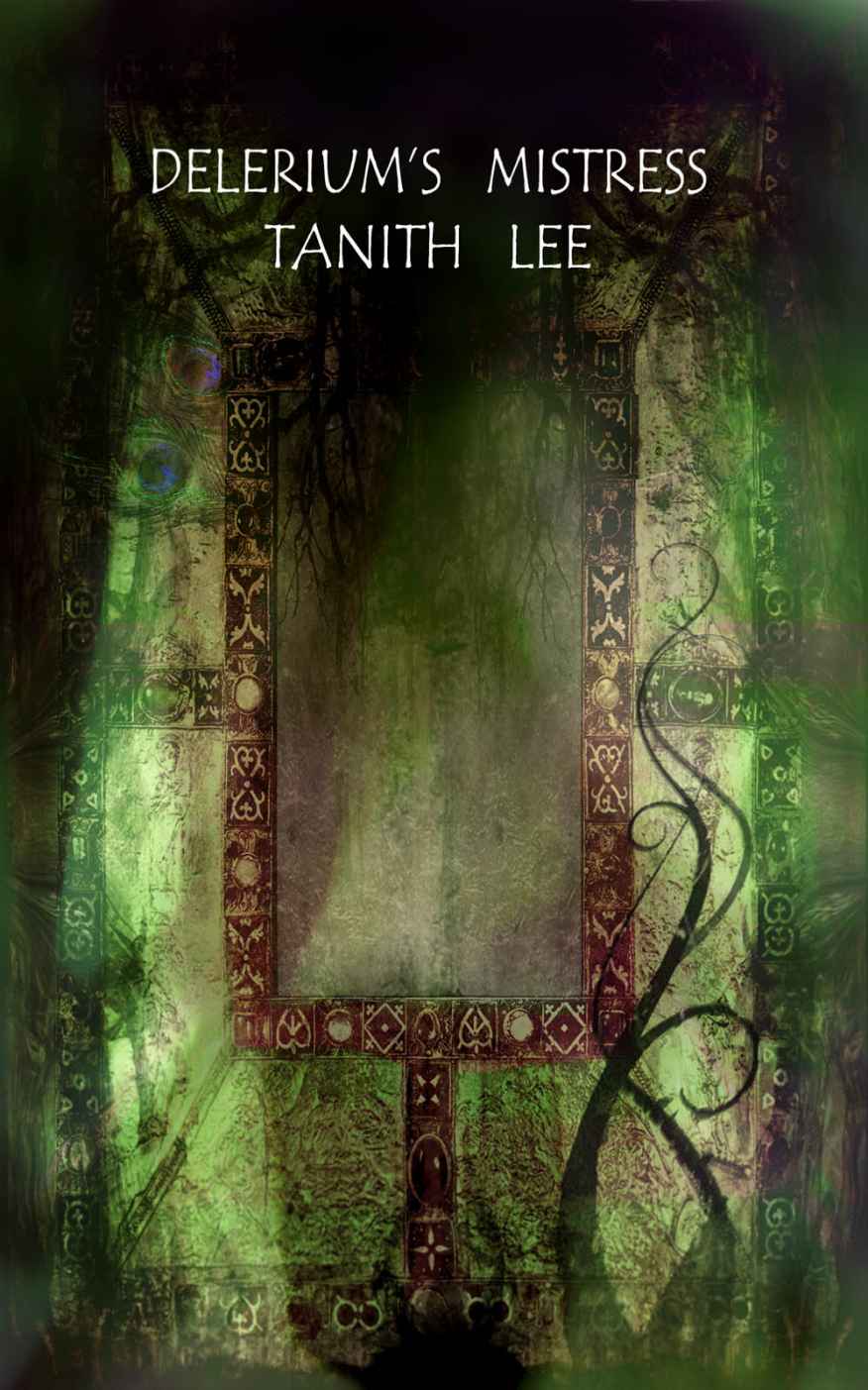 This is a work of fiction. All the characters and
events portrayed in this book are fictitious, and any resemblance to real
people, or events, is purely coincidental.

All rights reserved, including the right to
reproduce this book, or portions thereof, in any form.

The right of Tanith Lee to be identified as the
author of this work has been asserted by her in accordance with the Copyright,
Design and Patents Act, 1988.

A word-sorceress of the round world.

Concerning those other histories referred to in
Delirium’s Mistress:

The stories of Zhirek
the Magician, and of Simmu who stole Immortality from the gods, and of the city
Simmurad, are to be found in
Death’s Master.
As are the stories of Narasen and her pact with Death, and of Kassafeh and
hers. And of the dealings of Lylas, too.

Dunizel’s story, and
that of her mother, are contained in
Delusion’s
Master,
along with the account of the building—and fall—of the great
Tower, Baybhelu.

BOOK ONE:
Sovaz: Mistress of Madness

Part Three: Fair is Not Fair

Part One: Matters of Stone

Part Two: The War with Sea and Sky

Part Three: Under the Earth

Originally,
Delusion’s Master
, the third book of the
Flat Earth
sequence, and precursor of this one, was intended as the
first part of
Delirium’s Mistress
– or, put another way,
Delirium’s
Mistress
was to be the second part of
Delusion’s Master
. The
partially seen outline of both books had been conceived of as a single long
novel. All types of writing, for me, as a rule make their own lengths, however.
And at the end of what became
Delusion’s Master
, even I could see that
what I had, plus what must come next, would be far too large a volume. (With
hard copy, most of us prefer not to get dislocated shoulders from lifting and
reading a book.) So
Delusion’s Master
ended where it does, on an open
question. And some while later,
Delirium’s Mistress
begins with part of
the answer to that troubling inquiry:
But what is love?

A few of my novels have been interrupted – less by life
than other obsessions; for example,
Day By Night
by
Sabella
, or
Sung
in Shadow
by
The Silver Metal Lover
.
Delirium’s Mistress
was
due to join this group.

Just before I started back to the Flat Earth, I’d become
very intrigued by a character from real Round Earth history. Camille Desmoulins
had a small but starring role in the French Revolution. He was the friend of
Danton, and initially of Robespierre, a journalist of some talent, a
revolutionary of course – he roused the crowd that later took the Bastille –
and ultimately an extraordinarily brave and honourable man, refusing to shut up
his well-founded criticisms, until silenced by the Guillotine. Perhaps
unsurprisingly, what I had taken only for a strong interest in him, and the
Revolution itself, turned suddenly and grabbed hold of me, more or less body
and soul. And so in the end, after I had already written Parts 1 and 2 of the
First Book of
Delirium’s Mistress
(
Night Hunting
and
Lovers
),
my by then compulsive researches into the France of the late 18
th
Century – took over. I left
Delirium’s Mistress
where I had to, and was
swallowed, gladly and in terror, by the so-called Real World.

Given the size of the resultant historical novel, (watch
your shoulders, folks!), (514 large close-printed pages; over one thousand in
handwritten manuscript), I wrote it pretty fast in around a year. Its name is
The
Gods Are Thirsty
, and it is the only ‘straight’ historical novel I have
ever written. Soon after finishing it, in 1984/5, I returned, a stunned
wanderer, to
Delirium’s Mistress
.

The colossal excitement and the harsh, if non-physical,
beating
The Gods Are Thirsty
had given me, abated in their turn. While
the magic of the old/newly resumed work reinstated itself. After the
Revolution, where better to run to than the Flat Earth.

I’m unsure to this day, about thirty years on, if any
undercurrents or specific shadows from that historical frenzy infiltrated the
subsequent pages of
Delirium’s Mistress
. Sometimes, I seem to glimpse,
on re-reading this work, an element of unusually definite rebellion, or even
the fiery Parisian goals of Hope, Justice or Revenge, tracing their way through
a distorting mirror, over the more open horizons of the Flat Earth text. And
then again, another occasion, nothing of the sort. Certainly, the books could
not be more unlike. Aside from my always-preoccupation with the human race, and
its passions.

Luckily for me, and for the peoples in the Flat Earth
sequence, death, and even King Death himself, does not end the inner essential
life of anything. Death,
there
, is metamorphosis, never obliteration.
How glad Camille would have been, surely, as he mounted the ladder to his
execution, to have utterly and truly credited such a concept. His courage is
the greater since, most probably, he did not. But otherwise, maybe, the idea
that the answer to that question on the nature of love is simply, and
significantly, “love is love”, would have rung true for him. I think it might.

One last thing about this book you are holding (hopefully
having
not
dislocated any shoulders) is the identity of the Fifth Lord
of Darkness. No one, so far, seems to have spotted him accurately, and told me,
though he does, as I’ve said before, have a cameo late in this novel. For those
of you who haven’t guessed and are curious, he appears on the last pages of the
Part entitled
The War With Sea and Sky
. His aspect and provenance
may
be evident from the surrounding effects:
A hand – a great sleeve – a
million stitches coming undone
. Perhaps the most powerful of the Five
Lords, and the most fearsome, a personification of that material from which all
things come. And his name is________?

IT HAS BEEN recounted how, in the days of the earth’s
flatness, Azhrarn, the Prince of Demons, Night’s Master, one of the Lords of
Darkness, loved the maiden Doonis-Ezael or Dunizel (Moon’s Soul), a priestess
of the holy city Bhelsheved. And that because of the value he set on her (but
mostly, let it be said, to make mischief in those lands, which had angered
him), he got her sorcerously with child.

When this child,
a daughter, was born, Dunizel was condemned by her people, who greatly feared,
yet did not fully comprehend, the powers of Azhrarn. And despite the safeguards
her demon lover had left her, she perished.

Now, her death
seemed due to a trick played by another of the Lords of Darkness, Prince Chuz,
whose other name is Madness, Delusion’s Master. Therefore Azhrarn, meeting with
Chuz, swore they should thenceforth be enemies, and that, no matter where he
might hide himself, Chuz should be hunted down and the vengeance of the Demon
completed on him. Such a thing was very terrible indeed, that any of the
immortal and mighty Lords of Darkness should wage war with each other. “Do you
think I shake at you?” inquired Chuz. Yet it is possible he was not quite
sanguine at the development, for all that.

Dunizel alone had
Azhrarn loved; for the child, she had never been more than a game piece to him.
However, he had noted the speculative eye of Chuz upon her. In anguish and
fury, then, Azhrarn bore her to his city of Druhim Vanashta, underground.

IT WAS DUSK, and for a while the young man seated on
the high roof gazed up into the great sloping dome of sky. Then he read aloud
from his book: “Blue as the dark blue eyes of my beloved, the twilight fills
all heaven. The stars put on their silver dresses and they are fair, but none
as fair as she.” His companions lay on their elbows and looked at him,
quizzically. He shut the book and said, “Love, too, is simple madness.”

At which they made wild
gestures of dismissal.

“Love does not exist. ‘Love’ is the name women, and
their wretched old fathers, put on the trap of a ring.”

“Love is lust. Why make songs about an itch?”

The first young
man smiled. He was unusually handsome, pale, very fair, with beautiful eyes the
color of low-burning lampshine. In repose, there was a sweetness to him. With
sweet melancholy, he sighed.

“Ah, poor thing,”
they said. “What troubles him this evening, our Oloru?”

Oloru said, “An answer,
which has no question.”

“A riddle!” cried
the other young men. They grinned and shouted: “Make us laugh, Oloru.”

And all at once
the eyes of Oloru glittered like the eyes of a night-hunting fox. He sprang to
his feet, curled over, next dropped in a ball, next lifted his whole body
straight in the air, supporting himself by one hand, palm down, on the roof.
Then he began, on this one hand, to hop about, crying out all the while in a
raucous irritated voice: “Oh, how tiresome this is. You would think by now the
gods could have invented a better way for a man to travel.”

The companions,
duly diverted, laughed, applauded, and called the entertainer names. Oloru went
on hopping, though one of his fine silk gloves was by now probably quite
ruined. He hopped to the western parapet, and here his slim upside-down body
wavered, so the stars seemed juggled between his feet. “Behold,” said Oloru,
“here the sun fell over.” And he toppled sideways through blue dusk and stars,
and right across the parapet, and vanished.

The remaining
young men on the tavern roof leapt to their feet with yells of horror,
upsetting wine jars and other paraphernalia. Oloru was a favorite of their
lord, one of the magician-princes of this city. To take this powerful man the
tale of said Oloru, smashed on the cobbles seven stories below, was not a
charming notion.

But rushing to
the parapet and leaning over, they could be sure of nothing in the narrow alley
but the gathering of darkness.

Elsewhere, the
city spread around them under the sky, its terraces pearl-strung with lamps,
its towers bright-eyed with lit windows. Nowhere in that city could they be
safe if they once angered their prince, Lak Hezoor. While close at hand rose
the palace of this very lord, each of its spires made into a somber candle by
the cresset ablaze on its roof, and each cresset seeming now to glare over at
them intently.

Consternation.
Some ran onto the stair, meaning to descend and search the street on foot.
Others were already making up excuses for a violent death that had nothing
whatever to do with them. In the midst of this, suddenly Oloru stepped out of a
climbing fruit tree that spread its branches along the eastern parapet.

A Workplace Affair by Rae, Isabella
Heaven Looks a Lot Like the Mall by Wendy Mass
Cry Me a River by Nancy Holder
Project Terminus by Nathan Combs
Yuletide Protector (Love Inspired Suspense) by Lisa Mondello
Stories We Could Tell by Tony Parsons
The Artist and Me by Kay, Hannah;
Pride of Carthage by David Anthony Durham
Fear by Night by Patricia Wentworth
School of Discipline by John Simpson
Our partner