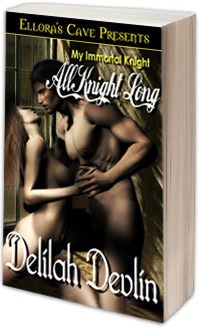 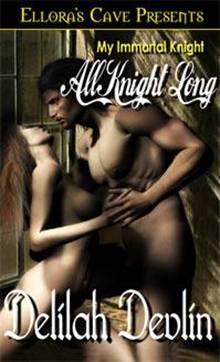 To Lena Austin for her expert advice for the Tarot
reading, and to my sister, MylaJackson, for her imagination and loving
partnership.

The small sign in the café window read: Welcome
Vampires and Sanguinarians!
(No blood products provided—none permitted on
premises! The Management).

Joe Garcia snorted. Every human in the place was a
walking, breathing blood product—a portable soda fountain for the Fanged Ones.

He pushed through the glass door and tried to dampen
the hope that rose in his chest, causing his heart to beat faster and his hands
to sweat. Thus far, he’d met only disappointment in his long search. This might
be just another dead end—the last one he could afford before his cash ran out
and his credit card was maxed.

Carlson was his last hope.

Inside the cafe, enticing aromas assailed him. The
smell of roasted coffee beans, which had been his life’s blood in another
existence, was overlaid with the tangy scent of the real thing—the warm,
viscous red stuff. The latter reminded him he hadn’t fed this evening, and
hunger gnawed at his belly, making him edgy and irritable.

And something else enticed him. Something dark and
sensual perfumed by a female musk with a tincture so unique it immediately sent
a curl of heat to his groin.

He walked past the coffee bar without acknowledging
the barrista’s greeting and wound his way through the tables, ignoring the
human appetizers. His gaze was fixed on a menu board at the entrance of a
roped-off area in the back, that read, “Vampire Survey Here”. An arrow pointed
down to a table laden with a stack of pamphlets.

He brushed past the table, searching the back of the
restaurant for his quarry.

“Sir, are you here ‘bout da survey Carlson is
conductin’?”

Joe turned toward the voice flavored with a deep
Louisianan accent. A pleasant-faced girl with black corkscrew curls all around
her head sat at a table near the cordoned entrance.

He bit back the rude retort that immediately came to
mind and answered, “Yes. I need to speak with her.”

“Well, you’ll have to complete a screenin’ survey
first,” she said pleasantly but firmly, holding up a stapled document.

Joe sighed and accepted the papers. What the hell?
Five more minutes wouldn’t kill him.

“Do you have a pencil?” she asked. When he shook his
head, she gave him a superior smile and extended a short, sharpened pencil.

Joe didn’t like her attitude one bit, so he reached
for her hand, running his fingers over her palm before taking it.

Her smile slipped and Joe could well imagine her
thoughts. Another vampire wannabe was hitting on her. He smiled and let her see
his teeth.

Her eyes narrowed and a single brow rose. She wasn’t
impressed.

That actually gave Joe hope he was in the right place
after all. His sharp fangs hadn’t fazed her.

“You can take a seat with the other guy,” she said,
indicating the first booth along the back wall.

Joe walked over and slid across the vinyl seat
opposite a young man dressed in black leather and sporting no less than five
facial piercings. The piercings glittered like tinsel in the dim light and Joe
wondered how the kid could stand leather in May— New Orleans was already sweltering,
even at night.

Turning over the top page of his survey, Joe quickly
scanned the questions. He hoped like hell they were only meant to screen out
the weirdoes and pretenders. Otherwise, he was screwed.

He wet the tip of his pencil on his tongue and read
the first question.

“Do you consider yourself a Vampire or a Sanguinarian?”

Since he had no clue what a Sanguinarian was, he
checked, “Vampire.”

“If you checked ‘Vampire’, skip to question 6.”

Maybe this wouldn’t take so long after all.

In the middle of the page, he found 6. “How often do
you have the urge to drink blood?”

He checked the block beside, “More than three times a
day.”
Three times a night would be more accurate.

“How often do you drink blood?”

“Do you drink your own blood?”

“What would be the point?” he muttered, and checked “No.”

When he reached the question, “Do you drink blood
during sexual encounters?”, he’d had enough.

He tossed the survey to the table and started to rise.

“She won’t see you unless you finish the survey,”
Metal Boy said, without looking up from his form.

The young man’s mouth twisted into a sneer. “You’ll
have to wait your turn. I was here first.”

Joe lifted his lips and showed him his fangs.

Metal Boy smirked and then lifted his lips, displaying
a whole row of sharpened teeth.

Joe took a quick glance around the café to make sure
no one was near, and then leaned over the table and shook his head. He let the
change come over him, reveling for once in the wildness that surged in his
veins as the bones in his forehead and brow shifted, and his skin stretched
tightly.

The boy’s eyes widened until the whites symmetrically
framed his irises. “I-I’ve just thought of somewhere else I need to be,” he
said, and quickly scooted off the seat and ran for the exit.

Satisfied that vamping was good for at least scaring
the shit out of punks, Joe took a deep breath and relaxed, feeling his face
reform to his human mask. Then he headed back to the girl with the wild hair.

“I’ll see her now,” Joe said, not even trying to
conceal his impatience.

“Have you finished dat survey?” she asked, her nose
buried in her Cosmo magazine. When he didn’t respond, she raised her eyes.

Something in his expression made her hesitate. “I’ll
see if she’s free.”

Joe smiled grimly. “You do that.”

She was back in a moment. “Carlson’ll see you now. You
left your survey on the table, but I gave it to her.”

He followed her to the farthest corner of the café,
toward another booth. A green lamp suspended over the table lent the corner a
warm glow. When he drew alongside the green vinyl seat, the girl indicated he
should sit and promptly left. Joe turned his gaze to the figure seated on the
opposite bench.

His research had told him the professor was considered
an expert in vampire lore. She’d written papers, magazine articles, and books,
and even been consulted by more than one movie producer. When he’d typed “vampire
expert” in the Internet search engine, her name had popped up everywhere.

All his research told him she might hold the answer,
but it hadn’t said anything about how young or
drinkable
she was. Her
hair was neither blonde nor brown, but the warm color of whiskey. Her eyes,
hidden behind a pair of wire-framed glasses, glinted cognac. Her lips were a
pale rosé.

The hunter within him woke.

Realizing he’d been staring, he cleared his throat. “You’re
Lily Carlson? The author of ‘Vampires: Myth and Reality’?”

Her gaze swept over him. An action so swift, he
thought he might have imagined it. “And you are?” she asked, leaning over the
table to extend her hand.

Joe froze. That indefinable scent was all over her. He
had the urge to rub on her like a kitten in catnip. He eyed her small hand,
afraid to touch it and feel the blood humming below the surface of her creamy,
white skin. He was
that
close to jumping her. “I thought the survey was
anonymous.”

“Oh, it is,” she replied quickly, withdrawing her
hand. “You’re responding to the ad, then?” At his nod, she looked vaguely
disappointed. “Well, I suppose I should review your answers. Please have a
seat,” she said, waving him toward the bench seat opposite hers. “Thank you for
taking the time to help me with my research.”

Bemused, Joe slid onto the seat. He knew he should get
straight to the point, but he stalled. For just a few minutes, he wanted to be
with a woman while she looked at him as if he was just like any other man.
Well, perhaps like he was a man with a serious mental disorder. But at least,
she wasn’t recoiling in horror or inspecting him like the Bearded Lady at a
freak show.

Not that she was a great beauty, nor even as strong
and fierce as his ex-partner Darcy. Dressed in a boring-beige suit, her
whiskey-colored hair piled in a loose knot on top of her head, and her glasses
sliding down her shiny nose, she looked like the schoolmarm she was. But while
all the beige and brown should have made her look muddy, she glowed golden in
the lamplight. And her scent—richly textured with something wild and animalistic—was
extraordinary.

The woman opened his survey and glanced at his
answers, then flipped the page. Her lips pursed for a moment, drawing his gaze
to her full lower lip. “There are a few more questions I need answered. Do you
mind if I learn a little more about you?” she asked, glancing up at him from
beneath her gold-tipped lashes.

The surge of heat that centered in his groin was way
out of proportion to her innocent question. Afraid he’d stutter over a tongue
that suddenly felt too large for his mouth, he merely nodded.

“You understand the questions I’m about to ask you are
part of a sociological study I’m conducting about our vampire subculture?”

“All information you provide,” she recited as if from
rote, “will be completely confidential. I hope you will answer me honestly,”
she gave him a doubtful stare, “or to the best of your ability.”

She looked expectantly at him, so he nodded again.

Her gaze returned to his survey and she cleared her
throat. “You…are a vampire?”

“Yes.” This was the first time he’d admitted that fact
out loud, and he knew how ridiculous it sounded.

“A Psychic vampire feeds on a human’s energy; a
Sanguinarian is a blood-drinker.”

“You drink blood once a day?” she asked, her head
still bent over the paper.

He shrugged, hoping she’d glance up at him again so he
could see whether her eyes really were a warm, golden-brown. “More or less.”

She scribbled something in the margin of his survey. “Well,
which is it?”

“Do you drink human blood?”

Joe wished she’d end this line of questioning, or he’d
be drooling shortly. Her scent had every appetite revving into high gear. “Yes.”

She glanced up from the survey. “How long have you had
the urge to drink blood?”

“Since I woke up, tonight.”

She blinked. “No, I meant…since ever.”

“Did you by chance suffer some sort of emotional
trauma?”

Joe stiffened. If you consider I died, and the woman I
loved had her boyfriend turn me, then hell yes! “Yes.”

Catch & Neutralize by Chris Grams
Her Lover by Albert Cohen
Between Worlds: the Collected Ile-Rien and Cineth Stories by Wells, Martha
Rainsinger by Barbara Samuel, Ruth Wind
Flirting with Fire (Hot in Chicago #1) by Kate Meader
An Elderberry Fall by Ruth P. Watson
Dream Smashers by Angela Carlie
The Couple Behind the Headlines by Lucy King
The Bad Seed by William March
Taming the Duke by Jackie Manning
Our partner