Read Deltora Quest #6: The Maze of the Beast Online

Deltora Quest #6: The Maze of the Beast 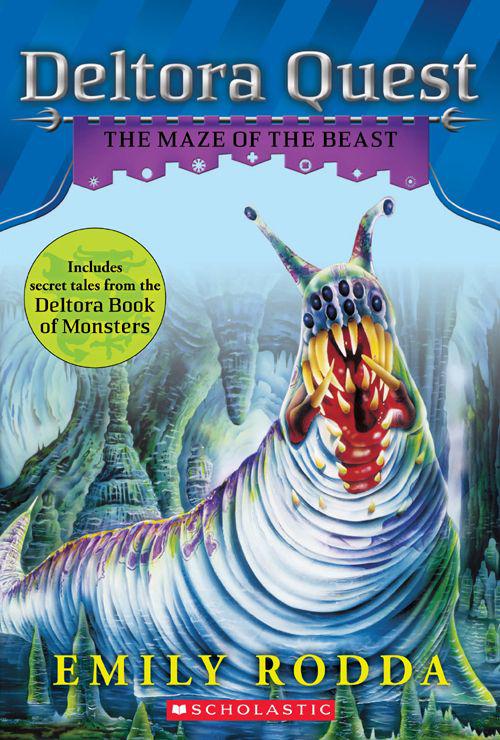 6 A Change of Plans

The Deltora Book of Monsters

The story so far …

Sixteen-year-old Lief, fulfilling a pledge made by his father before he was born, is on a great quest to find the seven gems of the magic Belt of Deltora. The gems were stolen from the Belt to open the way for the evil Shadow Lord to invade Deltora. Hidden in fearsome places throughout the land, they must be restored to the Belt before the heir to the throne can be found and the Shadow Lord’s tyranny ended.

Lief’s companions are the man Barda, who was once a Palace guard, and Jasmine, a girl of Lief’s own age who they met in the fearful Forests of Silence. On their travels the three have discovered a secret resistance movement led by Doom, a mysterious scar-faced man who rescued them when they were captured by the brutal Grey Guards.

Five gems have been found. The topaz, symbol of faith, has the power to contact the spirit world, and to clear the mind. The ruby, symbol of happiness, pales when danger threatens, repels evil spirits, and is an antidote to venom. The opal, gem of hope, gives glimpses of the future. The lapis lazuli, the heavenly stone, is a powerful talisman. The powers of the emerald, for honor, are still to be discovered.

Following the map Lief’s father drew for him, the companions are now on their way to the coast and their next goal — The Maze of the Beast. Haste and secrecy are all-important, for the Shadow Lord has become aware of them, and Lief has learned that his parents have been imprisoned.

L
ief, Barda, and Jasmine moved from Dread Mountain to the River Tor in silence and in haste, glad of the trees sheltering them from the open sky. For many days they had been travelling like this, all too aware that at any moment an enemy might strike. For many nights they had slept in turns, fully dressed, with their weapons in their hands.

Soon they would reach the river. They knew they had only to follow it to reach Deltora’s west coast. There, somewhere, was the next goal marked on their map — the horribly named Maze of the Beast. There, if Lief’s father was right, lay the sixth stone of the Belt of Deltora.

But the Shadow Lord’s servants were watching for them — waiting for them to show themselves. The Shadow Lord knew that the topaz had been taken from the Forests of Silence, that the ruby was gone from the
Lake of Tears, and the opal from the City of the Rats. Perhaps by now he even suspected that the lapis lazuli had in its turn been wrested from its terrible guardian in the Shifting Sands.

If the Dread Gnomes were successful in deceiving him, it would be some time before he realized that the emerald had already gone the way of the other four gems. But his servants would be in this area by now, lurking in the mountain’s foothills or searching from its skies. And the Maze of the Beast, and every road to it, would be guarded well by enemies searching for the group that fitted the description they had been given: a man, a boy, and a wild girl with a black bird.

Lief looked ahead at Kree, hunched gloomily on Jasmine’s shoulder beside Filli. Poor Kree wanted to stretch his wings. But it was too dangerous for him to be seen too much in the air, in case his presence marked their position for an enemy. So he was forced to stay close to the ground, and he did not like it.

None of us like it, thought Lief. It is unpleasant to scurry like hunted creatures through this rustling forest. Unpleasant to fear the coming of night. But there is no help for it.

He jumped as Jasmine abruptly swung to one side, snatching her dagger from her belt. Kree fluttered into the air, squawking. Lief caught a glimpse of bright, dark eyes and a pointed snout in the bushes. Then there was the scuffle of tiny, escaping paws and the next moment
Jasmine was sheathing her weapon once more, snorting in disgust.

“I am jumping at shadows and fighting wood mice, now,” she muttered, as she held out her arm to Kree and strode on down the rough pathway. “I cannot rid myself of the feeling that we are being watched.”

“I have felt it for days,” Barda answered, glancing back at her. “The forest seems full of eyes.”

Lief said nothing. He was very conscious of the Belt clasped around his waist. He felt that the hidden watchers must be aware of it, though it was concealed under his shirt, with his jacket buttoned closely over the top. It was far heavier than it had been when first he put it on, empty, in Del. The power and magic of the gems that now studded five of its medallions seemed to weigh it down.

Suddenly there was a faint, shrill cry and a splash from somewhere ahead. The companions stopped dead. The splashing grew louder and more desperate. At a word from Jasmine, Kree took wing and flew towards the sound.

But already Kree was flying back towards them, screeching urgently.

They began to run, their feet pounding on the narrow path, the sound of the despairing voice growing louder and more shrill by the moment, the sound of splashing growing less and less.

They burst through the last of the trees onto a broad bank of fine white sand. The river stretched, glittering, before them, deep and swiftly running. A young girl, no more than five or six years old, was drifting in the shallows, clinging to the floating branch of a tree. It was she who was screaming, vainly holding out her hand to another child who was struggling in deeper water, beside an overturned raft.

In moments, Lief and Barda had cast aside their boots and swords and were wading into the water. “You get the one nearest the shore,” Barda shouted over his shoulder to Lief as he struck out for the raft. “Make haste, Lief, or we will lose her. The river is running fast.”

Lief waded to the child holding the branch and managed to catch her before she was swept out of reach. She clutched at him frantically as he lifted her up and into his arms. She was deathly cold. The water lapped around his chest as he struggled back towards the shore.

“Marie!” the girl sobbed, shuddering and straining to look back at the overturned raft. “I fell in and she tried to help me and then she fell in, too! I caught
hold of the branch, but she … Oh, where is she? Where is she?”

Lief looked around and his heart sank. Barda had almost reached the raft, but where Marie had been there was only swirling water.

Barda took a deep breath and dived. In moments he had appeared again, dragging a limp, white bundle. He began swimming back to shore, paddling with one arm, dragging the bundle after him with the other.

“She is drowned!” screamed the child.

“No. She was not under for long. She will be all right,” Lief said, more confidently than he felt. He waded on, feeling with relief the water growing shallower as he climbed up to the bank where Jasmine was waiting with a blanket.

“I will see to her. Help Barda!” Jasmine said crisply, wrapping the blanket around the little girl.

“I am Jasmine,” Lief heard her say as he ran to where Barda was splashing to shore, clutching his limp, sodden burden. “This is Filli, and Kree. What is your name?”

“Ida,” cried the child. “I am Ida. Oh, take me away from the river! I do not wish to see it anymore! Marie is drowned. She is drowned!”

Lief plunged once again into the water and helped Barda carry the unconscious child up onto the bank. Like Ida, she was chilled to the bone. They laid her down gently. As he saw her face, Lief gasped in surprise. Straight brown hair, fine golden skin, heart-shaped face,
long, curling black eyelashes — why, she looked exactly like Ida, even to the small brown mark on the left cheekbone, and the simple white dress. They were twins! Identical in every detail.

What were twin girls, so young, too, doing in this wilderness alone? Where were their parents?

Barda had turned Marie on her side and was bending over her, his face grim.

“Is she dead?” Lief whispered. Somehow the thought was even more terrible now that he knew the girls were twins. It was dreadful to think of one of them being left alone. He glanced up and was relieved to see that Jasmine was beginning to lead the sobbing Ida off the riverbank, towards the trees.

Then, as Jasmine stepped aside to let the little girl move onto the path before her, Lief saw a tiny movement in the undergrowth nearby. Before he could move or cry a warning, there was a twang and an arrow was flying through the air.

It struck Ida in the back. She crumpled and fell forward without a cry. With a shout of outrage, Lief leaped for her attacker. His sword was lying out of reach. He did not care. He was angry and shocked enough to deal with this bare-handed.

He tore the concealing bushes aside and threw himself on the dark-haired boy who crouched there. Knocking the deadly bow from the boy’s hand, he hurled him out on the sand. The killer fell heavily on his face, his arm crumpled under him, and lay still, moaning
in pain. Lief ran for his sword, snatched it up. His ears were roaring. There was murder in his heart as he spun around once more.

Groaning, the boy on the ground rolled onto his back. He tried to rise, and fell back again, grimacing and holding his arm.

Ida’s body had disappeared. And Marie, little Marie, was rising from the sand. She had Barda by the throat, her white fingers digging deep into his flesh. Her teeth were bared. And then her body was bubbling, stretching, growing till it was a tall, wavering white shadow with a black mark at its center and an enormous peaked head like a ghastly bleached candle flame. The thing’s eyes were burning red and the mouth was a toothless black hole, but it laughed like a child as Barda staggered back and fell beneath its weight.