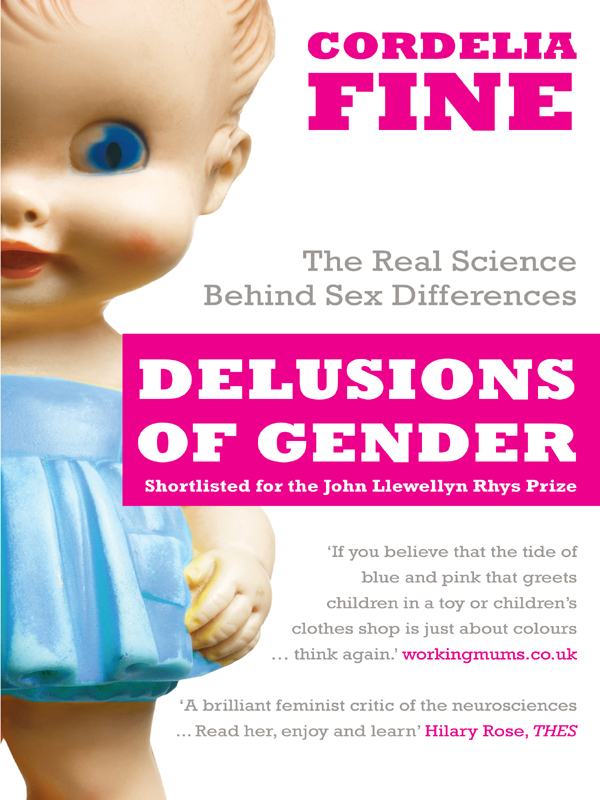 Praise for
A Mind of Its Own

‘We are all vain bigots, thanks to the foibles of the human brain, so argues Fine in her witty survey of psychology experiments … An ideal gift for anyone interested in psychology’
Focus

‘Consistently well-written and meticulously researched … [Fine’s] touching vignettes about life with her young son and her rational but tender husband suggest the buried presence of someone who could in the future rewardingly illuminate the workings of the mind with the studied casualness of the gifted novelist.’
Alain de Botton,
Sunday Times

‘In breezy demotic, Fine offers an entertaining tour of current thinking … [she] is especially fascinating on the blurring of the line between pathological delusions and the normal deluded brain.’
Telegraph

‘Fine, with a sharp sense of humour and an intelligent sense of reality, slaps an Asbo on the hundred billion grey cells that – literally – have shifty, ruthless, self-serving minds of their own.’
The Times

‘Fine’s style is chirpy … [with] many affectionately amusing scenes.’
Guardian

‘Fine’s flair for the humorous and anecdotal makes this a delightful read.’
Irish Times

‘Fine sets out to demonstrate that the human brain is vainglorious and stubborn. She succeeds brilliantly.’
Mail on Sunday

‘This is one of the most interesting and amusing accounts of how we think we think – I think.’
Alexander McCall Smith

‘A fascinating, funny, disconcerting and lucid book. By the end you’ll realise that your brain can (and does) run rings around you.’
Helen Dunmore

‘Excellent … Fine’s very engaging and chatty style … will delight many readers … Fine has got it just right. Although she is an academic, she writes like a human being … All in all this short and enjoyable book is a must for anyone who wants to get a better understanding of what their brain gets up to when they aren’t watching it. First class.’
Brian Clegg,
popularscience.co.uk

‘A fun introduction to some of the factors that can distort our reasoning. I’d recommend it to anyone who is just getting interested in the topic, or as a gift for anyone you know who still thinks that their personal point of view is unprejudiced and reliable.’
Psychologist

‘Fine is that rare academic who’s also an excellent writer. Highly recommended for all public and undergraduate libraries.’
Library Journal 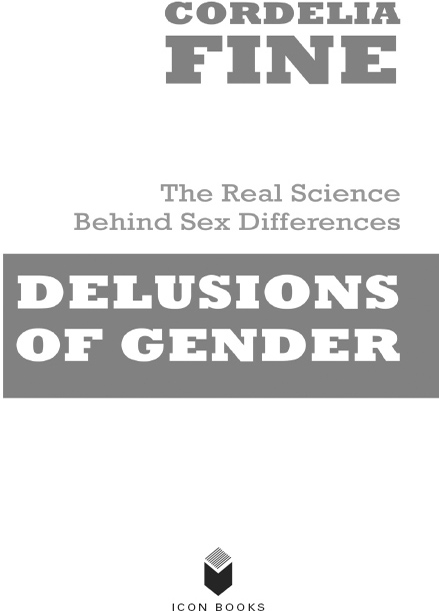 The author has asserted her moral rights.

No part of this book may be reproduced in any form, or by any means, without prior permission in writing from the publisher.

Cordelia Fine is a Research Associate at the Centre for Agency, Values and Ethics at Macquarie University, Australia, and an Honorary Research Fellow at the Department of Psychological Sciences at the University of Melbourne, Australia. Her previous book,
A Mind of Its Own
(Icon, 2006) was hugely acclaimed and she was called ‘a science writer to watch’ by
Metro
.

Praise for A Mind of Its Own

1. We Think, Therefore You Are

2. Why You Should Cover Your Head with a Paper Bag if You Have a Secret You Don’t Want Your Wife to Find Out

3. ‘Backwards and in High Heels’

10. In ‘the Darkness of the Womb’ (and the First Few Hours in the Light)

15. The ‘Seductive Allure’ of Neuroscience

18. Parenting with a Half-Changed Mind

Of all difficulties which impede the progress of thought, and the formation of well-grounded opinions on life and social arrangements, the greatest is now the unspeakable ignorance and inattention of mankind in respect to the influences which form human character. Whatever any portion of the human species now are, or seem to be, such, it is supposed, they have a natural tendency to be: even when the most elementary knowledge of the circumstances in which they have been placed, clearly points out the causes that made them what they are.

When his wife, Jane, is upset, he sits with her on the couch, reading a magazine or book ‘to distract himself from his own discomfort’ while he cradles Jane with the other arm. After a few years working on this issue, Evan gradually comes to be able to offer comfort in a more conventional way. The politically correct and/or scientifically uninformed among you may be wondering about the cause of Evan’s peculiar behaviour. Does he secretly find Jane deeply unattractive? Is he in the slow process of recovery from some deeply traumatic incident? Was he raised by wolves until the age of thirteen? Not at all. He’s just a regular guy, with a regular guy-brain that’s wired all wrong for empathy. That a simple act of comfort is not part of Evan’s behavioural repertoire is the fault of the neurons dealt him by nature: neurons that endure a devastating ‘testosterone marination’; neurons that are lacking the same ‘innate ability to read faces and tone of voice for emotional nuance’ as women’s; neurons, in a word, that are male.
1

Evan is just one of several curious characters who populate Louann Brizendine’s
New York Times
best seller,
The Female Brain
. In her depiction, men’s empathising skills resemble those of the hapless tourist attempting to decipher a foreign menu and are sharply contrasted with the cool proficiency of females’ achievements in this domain. Take Sarah, for example. Sarah can ‘identify and anticipate what [her husband] is feeling – often before he is conscious of it himself.’ Like the magician who
knows that you’ll pick the seven of diamonds even before it’s left the pack, Sarah can amaze her husband at whim, thanks to her lucky knack of knowing what he’s feeling before he feels it.
(Ta-DA! Is
this
your emotion?
) And no, Sarah is not a fairground psychic. She is simply a woman who enjoys the extraordinary gift of mind reading that, apparently, is bestowed on all owners of a female brain:

Maneuvring like an F-15, Sarah’s female brain is a high-performance emotion machine – geared to tracking, moment by moment, the non-verbal signals of the innermost feelings of others.
2

Just what is it that makes the female brain so well suited to stalking people’s private feelings as though they were terrified prey? Why, you are asking, are male neurons not capable of such miracles – better placed instead to navigate the masculine worlds of science and maths? Whatever the answer du jour – whether it’s the foetal testosterone that ravages the male neural circuits, the oversized female corpus callosum, the efficiently specialised organisation of the male brain, the primitively subcortical emotion circuits of boys, or the underendowment of visuospatial processing white matter in the female brain – the underlying message is the same. Male and female brains are different in ways that matter.

Having marital problems, for instance? Turn to
What Could He Be Thinking?
by ‘educator, therapist, corporate consultant, and …
New York Times
bestselling author’
3
Michael Gurian, and you will discover the epiphany the author experienced with his wife, Gail, on seeing MRI (magnetic resonance imaging) and PET (positron emission tomography) scans of male and female brains:

I said, ‘We thought we knew a lot about each other, but maybe we haven’t known enough.’ Gail said, ‘There really is such a thing as a “male” brain. It’s hard to argue with an MRI.’ We
realized that our communication, our support of each other, and our understanding of our relationship were just beginning, after six years of marriage.

The information from those scans, says Gurian, was ‘marriage saving.’
4

Nor are spouses the only ones who, it is now claimed, can be better understood with the benefit of a little background in brain science. The blurb of the influential book
Why Gender Matters
by physician Leonard Sax, founder and executive director of the National Association for Single Sex Public Education (NASSPE), promises to show readers how to ‘recognize and understand … hardwired differences [between the sexes] to help every girl and every boy reach their fullest potential.’
5
Likewise, parents and teachers are informed in a recent Gurian Institute book that ‘Researchers [using MRI] have literally seen what we have always known. There are fundamental gender differences and they start in the very structure of the human brain.’
6
Thus, Gurian suggests that ‘to walk into a classroom or home without knowledge of both how the brain works and how the male and female brains learn differently is to be many steps behind where we can and should be as teachers, parents, and caregivers of children.’
7

Even CEOs can, it is said, benefit from a greater understanding of sex differences in the brain. The recent book
Leadership and the Sexes
‘links the actual science of male/female brain differences to every aspect of business’ and ‘presents brain science tools with which readers can look into the brains of men and women to understand themselves and one another.’ According to the jacket blurb, the ‘gender science’ in the book ‘has been used successfully by such diverse corporations as IBM, Nissan, Proctor [sic] & Gamble, Deloitte & Touche, PriceWaterhouseCoopers, Brooks Sports, and many others.’
8