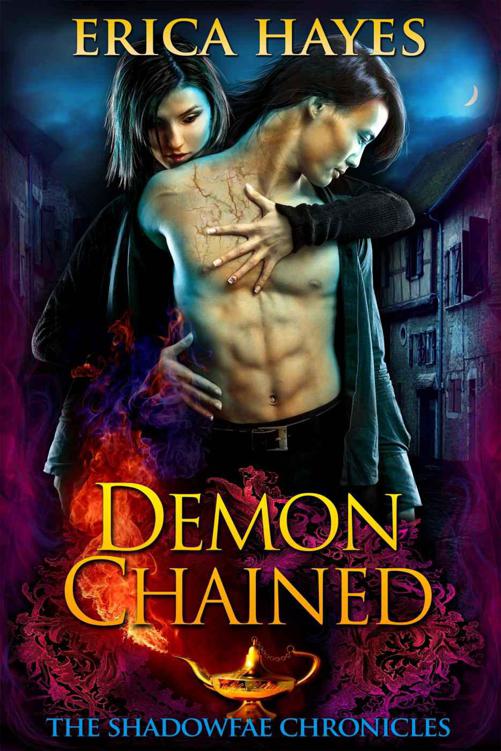 Jewel is a djinni of the lamp, an enchanted slave, bound to her owner by dark magical cravings she can't resist. She burns for freedom, and when her lamp is stolen—by Tam, a hot and dirty bad-boy thief—she vows to be rid of her new master at any cost. Even as she plots Tam's demise, the lamp's dark fascination makes her long to claim him as her own.

But the last thing Tam wants is a spellbound djinni who can't say 'no'. Cursed by a demon to suffer living death, he's tormented by undead longing for pain, pleasure, any sensation he can get. To have this exquisite, besotted Jewel
at his bidding is pure torture . . . because Tam refuses to succumb to her magical allure.

Not when he knows she can't truly be attracted to an ever-dying freak. And not when he’s already on a mission from his cruel demon master: capture and deliver one djinni . . .

Demon Chained
is part of the Shadowfae Chronicles series. Each of the books has its own romance and new main characters. The other books in the series are
Shadowfae
,
Shadowglass
,
Poison Kissed
and
Blood Cursed
, plus a free novella,
Cherry Kisses
.

The moral right of the author has been asserted. All rights reserved.

This ebook is published without DRM to enable ease of use and transfer between devices. Please do not copy or re-publish it without permission.

Every effort has been made to keep this book error-free. Please notify any errors, formatting issues or problems with this file to
[email protected]

Discover other titles by Erica Hayes

The worst thing about being dead? Low blood pressure. Getting a hard-on is just about impossible.

But I've sure as hell got one now. Squeezing a smug murdering asshole's throat between my thighs does it for me every time. I jam my pistol harder into his forehead, banging his blond head into the metal floor, and I can't deny that adds a certain something, too.

Spit leaks in my mouth, thick and tasty, and I savor it. He can't move his arms, and his cool sweat soaks into my jeans. Bitch of a chafe there tonight. I remember to breathe, and the warm nightclub air tastes good, gritty with smoke and fear. "Tell me what you did wrong, bug guts."

My friend Gavain giggles. He's still lounging in the corner, shirt off, dark hair in tangles, blood-tinged fae sweat glistening on muscles stretched tight like wire. Gavain thinks all kinds of weird shit is funny. That's why he helped me lure this dog to his death. But I don't want to think about Gavain right now. I'm having too much fun.

The gangster grits broken teeth, his hair plastering in splashes of his own blood. "Don't know what you're on about."

Bzzt!
Wrong answer. First rule of dealing with a reanimated psycho bent on revenge: tell him what he wants to hear.

I squeeze tighter, lean closer. My
oily breath wets his face. "You killed me, motherfucker. You blew my goddamn brains out in front of my little girl. I'm still picking out bone splinters. Ringing any bells?"

Vertebrae pop as I twist my neck to show him the hole, black and sticky with rot beneath my long hair. I was going for a haircut that day, too, before the ambush. If they'd waited half an hour, kids would be running from me in the street. As it is, I can pass for living, just, so long as no one gets too close.

He chokes, either the smell or the pressure, and struggles, bare skin sticking on the metal floor. But he can't shift me. Not with the added weight of anticipation. I've waited a long time for this.

"Jesus, Tam, Joey pulled the goddamn trigger, you know that, I never knew he was gonna—"

"Do I look like I give a shit?" My finger jerks tighter on the trigger, and my teeth clamp together, gums crunching. Joey DiLuca's already top of my face-down-in-a-garbage-skip list. This asshole was just easier to catch. Fury dizzies me, and now my dick's so hard, it hurts. "Blood on my little girl's dress. Bits of my brains in her hair, you shit-eating little worm."

I'm trying to be cool and bad-ass, but my vision smears, black blood staining my tears.

Dying's nothing like they say. I remember everything, and I didn't see white light, or my grandmother strumming a harp, or any shit like that. Everything just stops, like you've pulled the plug on a movie projector. Hell's nothing like people say, either, except for one thing: it's full of snot-faced bureaucrats. Deals with demons take time, and I slammed back into my body too late. My daughter's corpse, flowering scarlet in her dead mother's arms, her murderers long gone. I hadn't spoken to my ex for eighteen months, and I wasn't allowed to see Katie, but it didn't mean she wasn't my sunshine.

My enemies kidnapped her to get to me, and when they had me, they killed her anyway, just for spite. She died because I was too slow. I can't bring her back. But I'll make this slick pretty-boy gangbanger regret ever laying his sleazy hands on her.

His chest heaves under my ass as he struggles to breathe. "Jesus, don't shoot. Crazy motherfucker, get off me—"

"Shut the fuck up." I drag his head back, and my fingers smear his hair. His wet blue eyes lock with mine. He sees his death, and pisses himself. I breathe again, and the warm salt tweaks my sluggish sense of smell. Jesus. The stink feels so good, a shudder rips through me, my balls tight and burning. Sensation plays hard to get when you're dead. If I come when I shoot him, I'm not responsible.

Mouth or jugular? I tap my pistol against his teeth, but he squirms and squeezes his lips shut. I trace the barrel down to his throat, where his pulse flutters, and shove it in tight. "See you in hell."

And that's when
she
walks in, and everything turns to shit.

You might ask what a newly escaped djinni like me was doing in the ladies' room of a wild fairy nightclub at one in the morning. Surely the sensible thing to do was hide, right? Make myself inconspicuous, boring, unwantable?

Unfortunately,
sensible
wasn't high on my list right now. Believe me, when you've just spent half a century trapped inside a tiny brass lamp, the last thing you want is a quiet night in.

I rinsed my hands. The hot water tingled, glorious on my new-formed skin. The steel tap sparkled, and I stared, enraptured, as my optic nerves sizzled with sensation. I'd missed this. Just the feel of air passing over my skin, in my lungs; the taste of cigarettes and sweat, the rich, intimate flavor of people. Wild, reckless music shuddered the floor beneath my feet, and I longed to drown myself. To taste food again, to run, dance, laugh, touch someone, come back to life.

But I'd have to do something about these clothes first.

I glanced at the girl next to me, who wore a tight black shiny number that pushed her boobs up and ended only a few inches shy of her knickers, with a studded leather collar and high boots with cruel fanglike heels.

Clearly, things had changed since the fifties. The white satin party dress I'd reappeared in glared like an iced wedding cake under the buzzing purple lights, and my choker of plastic pearls looked like what they were, cheap and old-fashioned now. Apparently, my hair was all wrong, too, soft and curled where hers was stiff and spiky with some kind of goo.

I twisted the water off, the metal smooth and warm on my palm. "That's a cool outfit."

She bent towards the cracked mirror, plastering on sparkly blueberry lipstick. Her nails were painted the same color. "Thanks."

I unfurled my compulsion, a sweet silvery shimmer that laced my words with
do-as-I-say
. Damn, it felt good to use my magic for myself for once. "Give it to me."

She rolled her lips together and popped the makeup away. "Okay."

Yes. My blood thrummed, the sensation snatching my breath away. For a instant, cool air feathered my body. Then the warm embrace of nylon, tight on my torso like a glove, and a sharp stab in my ankles where leather cinched too tight.

The girl smoothed her new white satin skirts, and walked out, oblivious.

This is all I'm good for, really. I'm just a collector, a wheedler, a fetcher of baubles. I swap one thing for another when people aren't looking. Creating something out of nothing? Can't be done, on the whole. But try telling people that. They get hold of my lamp and they start thinking three wishes, untold wealth, cosmic power.
Fetch me the moon, Jewel, and french fries on the side while you're at it.
They're always disappointed when I tell them I can't.

Well, probably I could do the french fries. But no more taking orders for me. I'm my own djinni now.

I pushed my boobs up a little higher, and adjusted the dog collar at my throat. A swipe of that blue lippy, and I couldn't help the satisfied grin that plastered itself on my face. I dropped the makeup back in my new bag. Perfume in there, too, amber liquid in a cute glass bottle. I squirted it on and staggered, blood gushing to my brain. Whoa. The rich fragrance dizzied me like opium, my nostrils orgasming, and I fumbled as I searched further. Tissues, condoms, a couple of pink pills—medicine?—in a transparent bag, some crumpled rainbow slips of plastic that from the numbers on them I figured must be money, and a shining steel switchblade knife.

Too tempting. I popped the blade and with a couple of satisfying slashes, piles of long black hair dropped limp to the tiles. I tugged jagged ends around my chin, and grinned again. Too cool for school, baby.

I picked up the shiny clear plastic bag I'd brought with me, glancing over my shoulder to make sure no one watched. It was a police evidence bag, tagged with serial numbers. My master was murdered—so sad; no doubt the crazy asshole was asking for it—and along with everything else in his apartment, the cops had collected me.

Inside, my lamp gleamed, the etched brass warm and smooth, tarnish-free. My home. My prison, dark and empty, endless decades with no light, no sound, no sensation to remind me I was alive. Nothing but nightmares and tears, the hungry darkness swallowing my screams.

I swallowed. My master was dead at last, and I'd escaped before anyone new could claim me. What if I squashed the lamp flat? Welded the lid on tight, so no one could ever open it and enslave me? Dropped it deep in the ocean, buried it in some skyscraper's concrete foundations?

No Flame But Mine by Tanith Lee
Big Cat Mates Leopard Territory by Cynthia Sax
Black Dawn by Desconhecido(a)
Well-Schooled in Murder by Elizabeth George
The Night Watchman by Mark Mynheir
Skinny Bitch by Rory Freedman
In the Name of a Killer by Brian Freemantle
The Princess Club / Family Secrets / Mountain Madness by Catherine Marshall
The Ghost in the Big Brass Bed by Bruce Coville
The Departed by Templeton, J. A.
Our partner