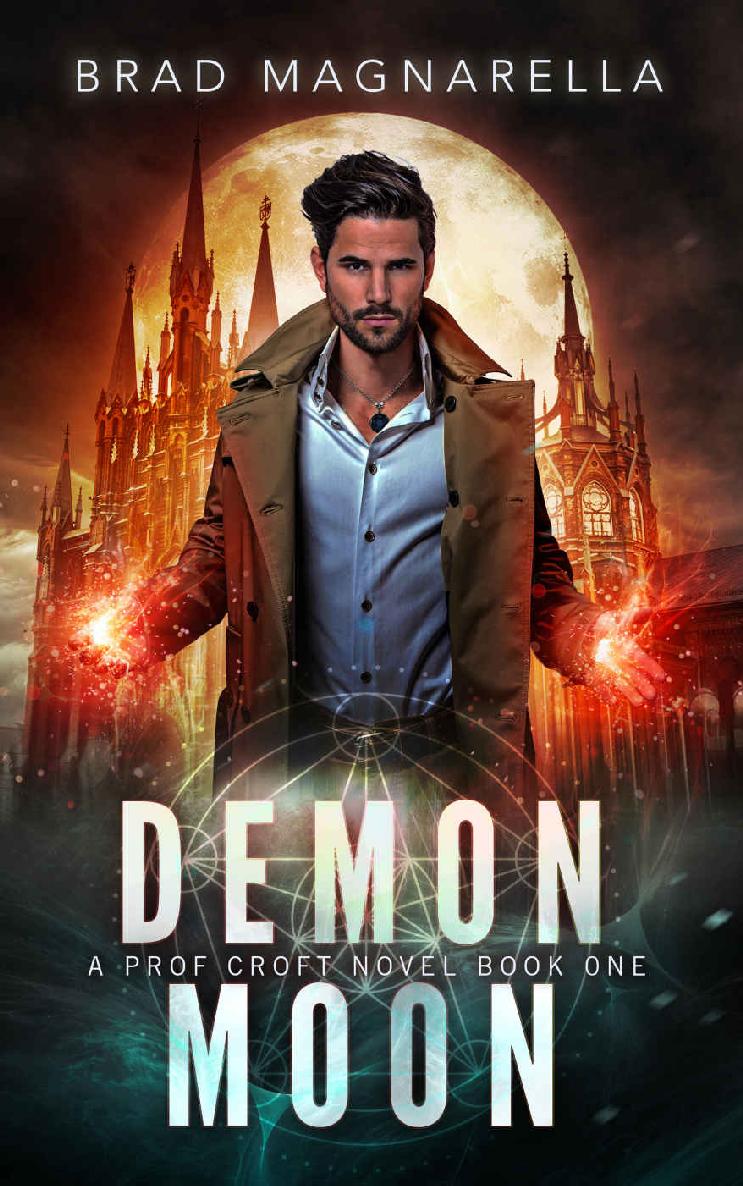 I blew out a curse as the first cold droplets of rain pelted my face and punched through my magic. As if I wasn’t already running late.

Making an umbrella of my coat collar, I stooped into a run, skirting bags of garbage that swelled from the fronts of row houses like pustules, but it was no use. The downpour that blackened the sidewalk and drove rats from the festering piles also broke apart my hunting spell.

And it had been one of my better ones.

I took refuge on a crumbling porch and shook out my coat. I was in the pit of the East Village, and it stunk. Except for a flicker of street light, the block was midnight dark, the building across the way a brick shell, hollowed out by arson. Not the domicile of the conjurer I needed to stop. Or more likely save.

Assuming I could find him now.

“Seguire,”
I said in a low, thrumming voice.

Most hunting spells worked like a dowsing rod, pulling the user toward the source of something. In this case, taboo magic. But reliable hunting spells, such as those needed to navigate New York’s convoluted streets, required time to prepare. And even then they were delicate.

Though the storm was already sweeping off, the spell refused to take shape again. I swore under my breath. Magic and moving water made poor bedfellows. And here I’d dropped a fat hundred on the booster: ground narwhale tusk. Sunk cost, I thought bitterly as I hustled back to the sidewalk. There were a lot of those in wizardry, my svelte wallet the proof.

Splashing in the direction I’d been pulled before the cloudburst, I gave up on the hunting spell and resorted to twenty-twenty vision, scanning passing buildings for signs of life.

As the sidewalks thickened with larger mounds of garbage, the rats became more territorial. I knocked aside several with my walking cane. The soul eaters that hunkered like shadows in the below-ground stairwells weren’t quite so bold. They watched with hollow eyes before shrinking from the protective power of my necklace, in search of weaker, drug-addled prey. Luckily for them, post-Crash New York was a boomtown for chemical addiction.

Unfortunately for me, the financial crash had also made a growth stock of amateur conjurers.

They tended to be men and women seeking lost money or means—or simply some meaning where their prior faith, whether spiritual or material, seemed to have failed them. Understandable, certainly, but as far as my work went, a royal pain in the ass. Most mortals could only access the nether realms, and shallowly at that. In their fat-fingered efforts, they called up grubby creatures better left undisturbed. Ones more inclined to make a sopping meal of a conjurer’s heart than grant his material wishes.

Trust me, it wasn’t pretty.

Neither was the job of casting the charming beings back to their realms, but it was the job I’d been decreed. I had some nice acid burns and a missing right ear lobe to prove it. A business card might have read:

Nice, huh? But unlike the city’s striking sanitation workers, I couldn’t just walk off the job.

Small messes became big messes, and in magical terms, that was a recipe for ruin. The apocalyptic kind. Better to scoop up the filth, drop it down the hatch, and batten down the lid. Plenty of ancient evils lurked in the Deep Down, their unfathomable senses attuned to the smallest openings to our world. Human history was dotted with near misses, thanks in part to the vigilance of my lineage.

The thought of being the one to screw up that streak was hell on a good night’s sleep, let me tell you.

At Avenue C, I rounded a small mountain of plowed trash and shuffled to a stop. A new scent was skewering the vaporous reek, hooking like a talon in my throat. A sickly-sweet scent, like crushed cockroach or…

Fear spread through me as I raised my eyes toward the source: a steep apartment building with a pair of lights burning near the top floor. Dark magic dissipated above the building in a blood-red haze.

I
was
too late. And whatever the conjurer had summoned was no cockroach.

“Crap,” I spat, and launched into a run.

The smell was distinctly demonic.

I stumbled into a blacked-out lobby, raised my ironwood cane, and uttered,
“Illuminare.”

White light swelled from an opal inset in the cane’s end to reveal an upended concierge’s desk and graffiti-smeared walls. The single elevator door opposite me was open. I moved toward it, noting the message sprayed over the burned-out elevator lights: “STEP RIGHT IN,” an arrow inviting riders into a carless shaft. I peeked down the two-story plunge to a subbasement, where I could hear something large thump-dragging around.

I hit the stairwell and took the steps two at a time. The cloying smell from the street sharpened in my sinuses, making my eyes water. I had smelled demon before, but in Eastern Europe, years ago—the near-death experience had marked my passage into wizardhood, in a way.

But no, never here. Not in New York.

Which meant a seriously evil conjurer had slipped under the Order’s watchful gaze. I considered sending up a message, but that would take energy I couldn’t afford at the moment—not to mention time. The Oracular Order of Magi and Magical Beings was an esteemed and ancient body. Accordingly, they made decisions at a pace on par with the Mendenhall glacier.

That, and I was still on their iffy list for what had happened ten years earlier, during the aforementioned demonic encounter. Never mind that my actions (which, okay,
had
involved summoning an incubus spirit) saved my life, or that I was only twenty-two at the time.

So yeah, the less contact with the Order, the better, I’d since learned.

Between the third and fourth floors, the stairwell began to vibrate. At the fifth floor—the one on which I’d observed the lights from outside—the vibrating became a hammering. I pulled the stairwell door open onto a stink of hard diesel and understood the commotion’s source: a gas-powered generator. At the hallway’s end, light outlined a door.

I was halfway to the door when a woman’s scream pierced the tumult. Jerking my cane into two parts, I gripped a staff in my left hand and a steel sword in my right. A shadow grew around the door a second before it banged open.

The man was six foot ten, easy. Blades of black tattooing scaled his pin-pierced face, giving over to an all-out ink fight on his shaved scalp. Leather and spiked studs stretched over powerful arms holding what looked like a pump-action shotgun.

He inclined forward, squinting into the dim hallway. The screaming behind him continued, accompanied now by angry beats and the wail of a guitar. I exhaled and sheathed my sword.

“Hey!” Tattoo Face boomed as I retreated back toward the stairwell. “You’re missing a kickass set. Blade’s only on till two.” Then as a further inducement: “Half cover, since you got here late.”

I sniffed the air, but the generator’s fumes were still clouding over the demon smell. I couldn’t fix on a direction. I returned to Tattoo Face, shouting to be heard. “Do you live here?”

He shrugged as he lowered the shotgun. “Live. Squat.”

“Seen anyone strange in the building?” I peered past him into the hazy room of head-bangers, the pink-haired singer/screamer—Blade, I presumed—standing on the hearth of a bricked-over fireplace. I decided to rephrase the question. “Anyone who looks like they don’t belong?”

Behind all of his ink, the punk’s face was surprisingly soft, almost boyish, but it hardened as I stepped more fully into the generator-powered light. I followed his gaze down to where my tweed jacket and dark knit tie peeked from the parting flaps of my trench coat. Beneath his own jacket, he was wearing a bandolier of shotgun shells.

“You a narc or something?” he asked.

I shook my head. “Just looking for someone.”

His eyes fell further to my walking cane, which, not to polish my own brass, was at definite odds with someone six feet tall and in his apparent prime. My hairline had receded slightly, but still… Tattoo Face frowned studiously, as though still undecided if he could trust me.

After another moment, he nodded. “Strange guy showed up a couple of weeks ago. Hauled a big trunk upstairs.” He raised his eyes. “Unit right above ours. Talks to himself. Same things, over and over.”

I sprinted back to the stairwell, not bothering with the usual pretense of a trick knee to explain the cane.

Tattoo Face seemed not to notice. “Blade’s on till two!” he shouted after me.

I raised a hand in thanks for the reminder, but I was still mulling the
talks to himself
part. The
over and over
sounded like chanting.

Add them up and I’d found my conjurer.

On the sixth floor, the demon stink was back. And gut-rottingly potent. I called more light to my cane and advanced on the door at hallway’s end, weathered floorboards creaking underfoot.

The knob turned in my grasp, but one or more bolts were engaged. Crouching, I sniffed near the dark door space and immediately regretted the decision. “Holy
hell
,” I whispered against my coat sleeve. The sickly-sweet scent burned all the way up to my brain, like ammonia.

Drawing the sword from my cane, I pointed it at the door and uttered,
“Vigore.”

A force shot down the length of the blade and snapped the bolts. The door blew inward. With another incantation, the light from my staff slid into a curved shield. I crouched, ready for anything, but except for the vibrating coming from one floor down, the space beyond the door was still and silent.

I tested the threshold with the tip of my sword. It broke the plane cleanly, which meant no warding spells.

I entered, sword and glowing staff held forward. The unit was a restored tenement that, like many in the East Village, had been written off in the Crash’s rumbling wake and left to die. Shadows climbed and fell over a newspaper-littered living room. I crept past sticks of curb-side furniture and a spill of canned goods before ducking beneath a line of hanging boxer briefs, still damp.

I stuck my light into one of the doorless bedrooms, the silence tense against my eardrums. A thin roll-up mattress lay slipshod on a metal bed frame, dirty sheets puddled around its legs. A cracked window framed the bombed-out ruin of a neighboring building. When a pipe coughed, I wheeled, my gaze falling to a crowded plank-and-cinderblock bookcase.

In the light of my staff, I scanned book spines that might as well have read “Amateur Conjurer.” Abrahamic texts, including a Bible, gave way to dime-store spell books and darker tomes, but without organization. Spaghetti shots in the dark. Someone looking for power or answers.

So where had the demon come from? More crucially, where had it gone?

Apache Vendetta by Jon Sharpe
Demon Bound (Bound Series, Book One) by Eve Newton
Dead Beat by Jim Butcher
Darwin's Blade by Dan Simmons
On the Far Side of Darkness by Graham, R. C.
Frontier Justice - 01 by Arthur Bradley
Confessions of a Wild Child by Jackie Collins
Path of the Assassin by Brad Thor
The Vampire and The Paramedic by Jamie Davis
Lace & Lead (novella) by Grant, M.A.
Our partner