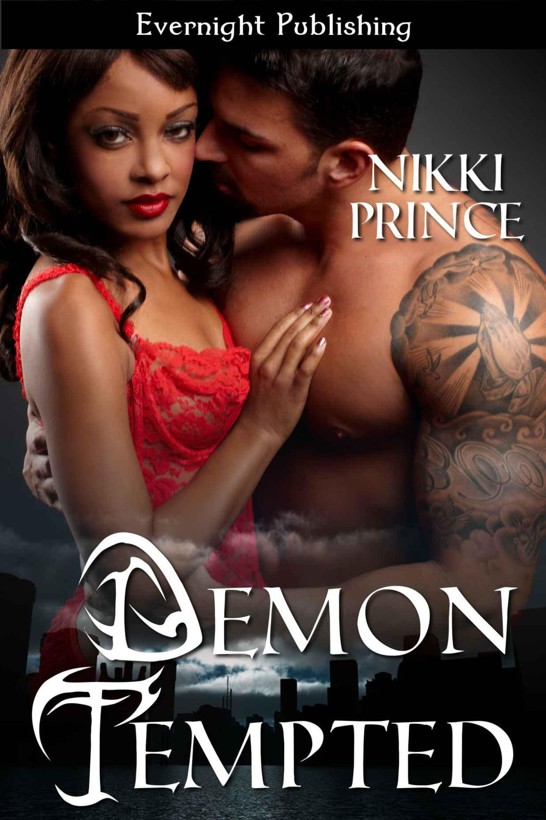 I dedicate this book to my family who let me write like mad during NaNoWrimo.
I confess to being a wild woman during this time and for your love and patience I am forever grateful.  I would also like to thank Em Petrova and Marie Medina for your wonderful insight. To my readers who have been dying to hear Eva's side, this is for you.

Eva Jackson stared at the back of Clay Quinones’ head and frowned. How was it possible that she hadn’t known who he was? She followed the lines of his strong back up the hill that overlooked the city. He stood just at the edge looking out. Swallowing hard, she dared herself to speak to him, the quintessential Adam to her Eve, and to act as if everything was okay. His name had more than hinted at who he was, but she’d been so wrapped up in what she was doing she hadn’t even recognized that fact.

“So you’re not just a deliveryman for C&C Incorporated, are you?” She tried to inject a little humor, but even that fell flat, so she asked what was really on her mind. “Why have you brought me here?”

He turned to her, and she was taken aback by the look in his eyes. She stumbled backwards, not out of fear but out of the need to hide. His countenance shamed her.

“Do you honestly have to ask me that, Eva? No, I’m not just a delivery man—I’m part owner, and you know exactly why I brought you here.” Oh hell, why did he look even more striking now? At that moment she saw how truly powerful he’d become. The anger radiating off of him was tinged with some other emotion she didn’t want to place.

“Clay, if you’ve brought me here to treat me like shit, you can go to hell.” Sheer bravado, something she didn’t truly feel, but damn if she wouldn’t make up for it in spunk. He burst out laughing at her, and she knew the look that came over her face was one of incredulity. He laughed for full minute before he spoke.

“That’s a good one, Eva. How about the hell you put everyone through with your jealousies and lies all these years?”

She purposefully didn’t answer his question and asked one of her own. “How long have you known who I was?”

His ghost of a smile chilled her, and she had to look away. After seeing that look on his face, she wasn’t sure she even wanted an answer to that. She moved away from him to stand at the edge of the hill so that she could observe the city.

She’d always felt so in charge around him, but now? No, she didn’t. He’d allowed her to feel that way, but it wasn’t the truth. Clay had always been the one in charge.

“I need to go back to Lili and explain.” She searched for a way to leave, but his words stopped her.

“What’s to explain? That you purposefully went after the one she loves and at every turn tried to stop her from remembering who she was? Where would that get you? Besides the fact she doesn’t want to speak to you right now.”

“I need to explain to her how wrong I was.”

“Now is not the time, Eva. You need to leave Lili and Samael alone for now. Lili told you she didn’t want any contact with you. I think you should honor that wish. Let them heal and recover from your misdeeds.”

“If I’m so bad, why the hell are you even bothering with me? Also, do tell me why this feels like revenge?”

“That is a question you need to answer on your own, Eva.”

“What are we waiting for? Why did you bring me
?” She turned to stare at him, and the rest of the words died in her mouth as she saw the angel with black wings that now stood next to Clay.

Clay turned to the angel and gave a nod of respect, as if he knew that he’d be coming. She had her answer; this was her time for judgment. Clay had brought her there to face the consequences.

“Kamuel.” Her gaze went from the angel to Clay and then back to the angel—the very seraph that had expelled Adam and Eve from the Garden of Eden. His presence didn’t bode well for her.

“Hello, Clay and Eva.” The pale-skinned angel with long red hair and piercing green eyes held her gaze, and she gulped hard.

“Hello, brother,” Clay said as Eva tried to recover her voice. Kamuel nodded at Clay then advanced to stand directly in front of Eva.

“Do you know why I’m here, Eva? This isn’t like the last time we met.” His gaze pierced into her, making her catch her breath.

“No … no…” She repeated the word as if it was going to save her from her fate. He was right; this wasn’t like the last time they’d met. That time had been when he’d expelled them from the garden. She’d held out the hope that she’d never come face to face with him over another botched deal.

She’d said no, yet that wasn’t entirely true, as she had some idea. She just didn’t want to voice it. Eva accepted who Kamuel was and what he represented. Kamuel gave a small laugh that held no humor and leaned in close.

“Eva Jackson, also known as Eve, the time has come for you to receive the consequences for your past transgressions. Are you ready to hear your penalties?”

Eva had known this day would come. You didn’t do what she’d done and get away with it. She’d known she was being watched, and nothing escaped this angel’s notice. Nothing. She’d fooled herself into complacency. She looked one last time at Clay and then back at Kamuel. Clay’s face didn’t betray anything, so she couldn’t tell what he was thinking.

“Yes, Kamuel, I am.” She was resigned to the fact that she’d had this coming, and who could dodge Karma forever? No one could, and from the look on Kam’s face she was going to get a big kick in the ass from Kismet. Destiny always came around to bite you in the ass, and now it was time for her ass to get bitten.

“We’ve watched you through the years, Eva, and have been disappointed in the road you’ve taken. A road, I might add, you could have paved differently.”

She was about to speak but Kamuel held up his hand, keeping her in silence.

“We all have been given choices. What choice we make can mean our glory or our ruin. You’re being given this time to sort everything out. But also to see if you can be what you truly should’ve been from the beginning.”

What I should have been from the beginning? What is he talking about?

Kamuel paused and moved away to look at the city below as he clasped his hands behind his back, apparently in thought. Eva shifted, waiting for him to deliver her fate. She didn’t have long to wait. Kamuel turned to her, his eyes showing the only betrayal of the trouble he felt in handing down this sentence. They seemed to shimmer with a fiery heat, searing her to her very core.

One would think as a demon she’d be stronger than she felt at the moment. She chewed nervously on her bottom lip, rubbing her hands together, the other sign that she was uncomfortable.

“Eva Jackson, you have been found guilty of casting a generational curse and for that you will pay with the loss of your powers, until a time when you’ve shown us that you can be deemed worthy enough to have them back. You’ll also be placed under Clay Quinones’ watch.” She felt something alter within her as soon as his words left his mouth, and she gasped softly.

“I’ll be under Clay’s watch?” Her humiliation was complete.

She peered at Clay over the angel’s shoulder. Clay’s face looked impassive. She wanted to reach out to him, needed him to do the same. She wanted him to tell her that everything was going to be okay, even if it wasn’t. However, that wasn’t to be at the moment and with good reason. Kamuel.

“Yes, it’s how we wish it to be. You’re too much of a liability to yourself and anyone else. You’ll remain under Clay’s guidance until there comes a time when
we
feel you have learned your lesson.” Kamuel paused once more, and she knew it was for effect, before he spoke again. “Clay has a way with you. There is no better guardian for this than Clay. Now come here and stand before me. It’s time.”

Swallowing hard, Eva moved forward, not daring to look back at Clay. The shame she’d felt earlier was now twofold. She stood in front of Kamuel, her eyes downcast. She found she couldn’t look at him—it hurt too much. Eva recognized it was the weight of her wrongdoing pressing her down and making her contrite.

“Too many times you have listened to the wrong voice in your head. How many times must you falter, listening to the snake?”

She knew the question was rhetorical and not meant to be answered, so she didn’t. When he didn’t say anything else she did take the chance to speak.

“Kamuel, will I lose who I am?” She couldn’t help but ask that question.

“You mean the fact that you’re a demon, Eva?”

“It is with great sadness that I say this to you, as you were meant for better things. Your powers, if you wish to call them that, will cease.”

Tears filled her eyes. Not because she believed she didn’t deserve what was happening, but because being a demon was all she knew.

“Will that make me—?” She couldn’t say the words.

“Human, Eva? In a sense, yes, that would make you human.”