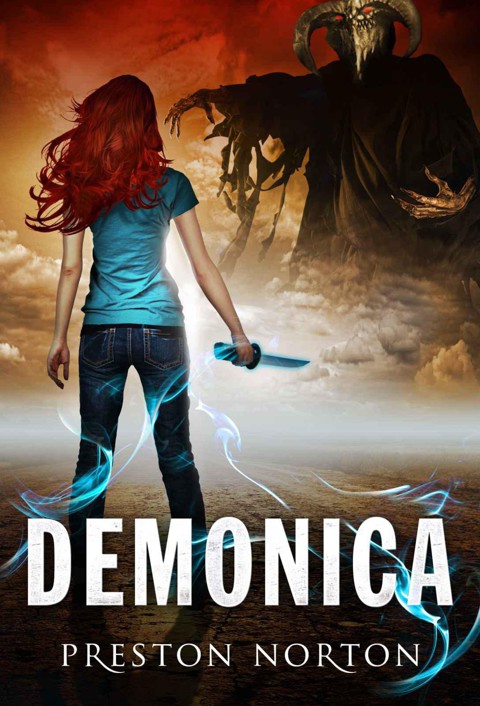 12.
The Demon on the Ceiling

13.
The Hostage at Hexham Manor

15.
Three Demons and a Witch

16.
The Power of the Slayer

22.
Night of the Living Dead

24.
Killing Two Birds with One Stone

30.
Dante and the Secret

Other Books by Preston Norton

It was the weirdest fucking thing.

He stood outside the restaurant window. Shadowy hair swept with untidy perfection from his scalp. He looked only slightly older than me—Seventeen? Eighteen tops?—but wore a crisp black suit with a loose matching tie hanging from his unbuttoned collar. A tight-lipped smile sliced across his face. And then there were these eyes, I shit you not, this intense shade of blue like the entire goddamn Arctic Ocean captured in two penetrating orbs.

He was staring directly at me.

My fork went limp in my hand. “Casey?”

My voice was barely a whisper. I glanced at my brother for only an umpteen gazillionth of a smidgen of a second.

“Huh?” Casey mumbled through a mouthful of pasta. He swallowed, and his prominent Adams apple shifted. “You say something?”

I was still staring at the empty window, half-expecting the boy in the suit to reappear, walking past one of the adjacent windows. He was nowhere. The hell? Did I imagine him? I mean, it was Friday and all, at the end of a very long school week, but…seriously? Was I really seeing shit?

“Monica?” said Casey, raising an eyebrow. He waved a calloused hand in front of my face. “Yoo-hoo. Earth to Monica. Anyone home?”

I blinked and pretended to smile. “It was…nothing. Just thought I saw something.”

My brother didn’t look convinced. Not for a second. “You look like you saw a ghost.”

The smile on my face became harder to pretend. A ghost seemed like the best guess so far.

“Yeah, it was definitely a ghost,” I said with a sarcastic smirk.

“That’s what I thought,” said Casey. He leaned back in the cushioned booth seat with his head craned back in his hands. “Lousy poltergeists.”

Even though he was my brother, and I loved him to death, we were nothing alike. Casey was adventurous—a modern teenage mountain man. His chin was enveloped in scruff, darker than his unkempt auburn hair that hadn’t touched the likes of a comb in nearly a decade. He was wearing a flannel shirt, as usual, with the sleeves rolled halfway up his thick forearms. He loved fishing, hiking, and don’t even get me started on hunting. It was enough to give the kid a hard-on. He was eighteen—two years older than me, and more importantly, the legal age to own a gun. It was a good thing our small podunk town extended into miles upon miles of open forest, or the poor kid might have gone crazy a long time ago. The forests surrounding Villeneuve, Louisiana were entangled within the vast stretch of the Driskill and Jordan Mountains. However, calling either of these real mountains was like calling a Coke Zero a real Coke. Which, we all know, is bullshit.

Unlike my barbarian-sized brother, I had the approximate body mass of dental floss. I couldn’t shoot a goddamn pea-shooter without rocket-launching myself backwards in the opposite direction. Believe me, I tried—all thanks to Casey’s incessant peer pressure. Thank god he didn’t push drugs or something. As you might guess, despite being in my junior year of high school, I had the exotic build of a freshman. Or a boy in junior high. I was as flat as Texas. Top that off with a head of red hair to blow away any fire hydrant, and I bore a remarkable resemblance to a human matchstick.

“So, Monica…” said Casey. He pushed his empty pasta bowl to the center of the table, “whatcha got planned for the weekend?”

“Weekend?” I said. “Do they still call it that with the buckets of homework they’re handing out?”

“Psh! Homework Shmomework. Your brain will stop working if you use it too much.”

“Ah. Is that how it works. Well, it looks like the future of America is in good shape.”

“You know what you need?” Casey leaned forward on the table and poked me playfully on the nose before I could swat his hand away. “A date.”

“Hey, I just think that with all the good looks in our family,” —he made a quick gesture to his own face like he was the poster boy of Abercrombie— “my sister shouldn’t be sitting around single and doing homework every weekend. When was the last time you got asked on a date anyway?”

I rolled my eyes at this ridiculous interrogation. “Two weeks ago.”

“When was the last time you got asked on a date, and you didn’t shoot the poor bastard down?”

“Hey, that’s not fair. The guy was like the Supreme High Chancellor Overlord of Douchebaggery.”

“Well, I’m sure that’s not the case with every other guy that’s asked you out. As crazy as it sounds, a lot of guys aren’t so bad once you get to know them.”

“Casey, we’re not having this conversation.”

“You can’t just sit around waiting for your fairytale prince to ride up on a white stallion. Nowadays you just have to settle for nice guys who happen to have good personalities and good looks. The world is a horrible, cruel place, I know.”

“Hmm. Apparently it runs in the family. So how about Nathan Hunsaker?”

“What about Will Lambert?”

“Oh, I got it,” said Casey, his eyes suddenly wide with excitement. “Eli Jacobson.”

I felt a tinge of guilt after this last accusation. Eli Jacobson moved to Villenueve just a few months ago, and he was already one of the nicest guys I knew. And, like Tim Tebow, he was a hunkalicious slab of man meat. But god, he wore awkward like a perfectly tailored suit.

“Oh, come on,” said Casey. “You two are perfect for each other.”

“Are to,” said Casey. “You two are like Ghandi and Mother Teresa.”

“No, we’re not! I mean…I’m not. You were just getting on my back about being mean rejecting guys on dates.”

“Yeah, but that doesn’t mean you still aren’t insanely nice.”

“You volunteer at the old folks home.”

“You volunteer at the animal shelter.”

“You like
Anne of Green Gables
,” said Casey, as if that statement had all the pertinence in the universe.

“What the hell does that have to do with anything? You know what? I don’t even want to know. Think what you want. But there is no way you’re hooking me up on another date with Eli.”

I responded with a seductive sneer. “Why? Is there a problem with that?”

“Yeah, I don’t want to compete with my sister for all the cute girls.”

“I’ll leave you all the outdoorsy ones.”

Immediately, I wanted to kick myself in the mouth. Even more so as the humor drained from my brother’s face.

“Well we know how well the last one went,” said Casey, vacant and emotionless.

Biting my lip, I wondered how I could sensitively back myself out of this one. The “last one” he was referring to was his ex-girlfriend of two months ago. Not “ex” because they broke up. The “ex” was because she died. Her name was Cate Mallory. She was a black-haired beauty and a damn-near-exact female replica of my brother in personality. She could keep up with my brother in fishing and hunting, and she
loved
hiking and mountain-climbing despite our obvious lack of “real” mountains. She and Casey had been dating for over a year. There wasn’t even a question in any of our minds that the two of them would eventually get married. Those bitches, Fate and Destiny, however, had different plans. One day, she went hiking by herself. This wasn’t unusual for her.

What was unusual was that she didn’t come back.

Casey was the first to worry and organized a search party with several older hunters that he knew. When they finally found her…

Authorities determined that it was most likely a black bear attack—the only mammal in these parts big enough to possibly cause the damage it did. Even then, many experts had their doubts.

Needless to say, Casey was fucked. Two months is hardly enough time for a wound like that to scab over. I had found that the best way to handle the situation with him was to simply not bring it up at all.

“So how about you?” I said, changing the subject hastily. There was really no subtle or tactful way of doing it at this point. “What are your plans for tomorrow night?”

Casey forced a cheeky smile in response. “Tomorrow? C’mon, all the cool kids start their weekend on Thursday night. I got myself a hot date with my Remington and Mother Nature.”

I had thus far been unsuccessful in finishing my chicken and shrimp carbonara. Just as I had been ready to insert another forkful of pasta into my mouth, this news caused me to lower my silverware. “You’re going hunting at night? Is that even legal?”

“Of course it is.

“But isn’t it dangerous?”

“Only if you don’t know what you’re doing. Fortunately, I’m an expert.”

“That rule can go suck my dick.”

Casey puckered his face at this response.

“Can’t you just wait until Saturday morning?” I asked. “Then you’ll have all day to hunt.”

Casey shook his head before I could even finish my sentence. “Not gonna happen, Monica. I’ve been waiting all month for tonight.”

“What’s that supposed to mean?”

“It means that I’ve already made up my mind about tonight, and you’re not going to change it.” His stubborn gaze shifted from me to my half-eaten pasta, transforming into puppy eyes. “You gonna eat that?”

As upset as I was, I couldn’t fight back my amused smile. With a dramatic sigh, I pushed the bowl to his side of the table. “Throw it down, champ.”

My brother didn’t need to be told twice. Reclaiming his fork like a King Leonidas unsheathing his sword, ready to go motherfucking “THIS. IS.
SPARTAAAAA!
” on God-King Xerxes and his motherfucking Persians in motherfucking slow-motion. He shoveled his way through the remaining dish. By the time I considered timing him, he was already finished.

I snickered to myself. “It’s a good thing you don’t slow yourself down with silly stuff like chewing.”

Dropping his fork in the cleaned-out bowl, Casey seized the check from the table and winked. “This one’s on me.”

Sliding out of the booth, my brother stretched his abdomen from side to side as he approached the front register. I could only imagine how well all that food was sitting.

Hoisting my over-packed purse off the booth seat, I stood up as well and fixed my clinging skirt. Just as I was about to follow after Casey, my gaze was inadvertently drawn to the window once more.

Whether I had been expecting it or not, the young stranger with the midnight hair and matching suit and tie had returned, only this time he was standing across the street. His peculiar smile had not changed though. And his blue eyes were still fixed on me.

Our interlocked gazes were soon broken as a bus cruised down the street at a leisurely pace. As it rounded the corner, he was gone once more.

Sherlock Holmes and the Adventure of the Tainted Canister by Thomas A. Turley
Cities of the Dead: Stories From The Zombie Apocalypse by Young, William
Airmail by Robert Bly
The Dark-Hunters by Sherrilyn Kenyon
Escapade by Joan Smith
Black Dog by Caitlin Kittredge
The Pick Up Wife by W. Lynn Chantale
Blood at Yellow Water by Ian W Taylor
The Half-Child by Angela Savage
Relatos de poder by Carlos Castaneda
Our partner