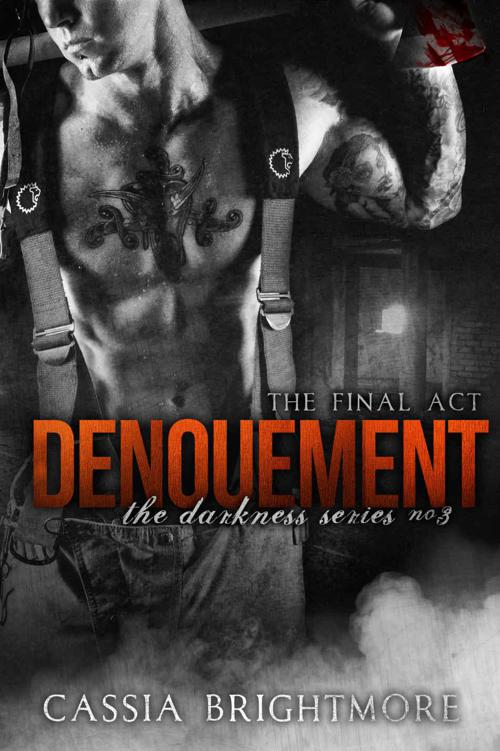 Denouement is a work of fiction. All characters, organizations and events portrayed in this novel are either products of the author’s imagination or used fictitiously.

All rights reserved. In accordance with the U.S. Copyright Act of 1976, the scanning, uploading and sharing of any part of this book without the permission of the publisher is unlawful piracy and theft of the author’s intellectual property. Thank you for your support of the author’s rights.

To love is to never forget.

S
tepping back from
the brink of madness is an enormous feat. Can it be done? Can the mind heal itself after sinking to the lowest of lows, committing the most unspeakable of acts? When the fight of good against evil has consumed you, what would you do if the person staring back at you in the mirror has been stripped away? Reduced to nothing but the devil incarnate, a nightmare walking amongst the living.

Nothing causes a greater chill than the burn of an incessant flame. Given the right ammunition, an indestructible weapon can be formed, its purpose to cause chaos and devastation. Once the match has been lit, is there any way to avoid detonation?

T
he lyrical music
flowing from the bedside table had Serena Collins opening one eye in reluctance. The sound of the alarm tried to disguise itself as a soft melody, but its real intentions were revealed when the noise level increased; refusing to let her drift back to sleep. Groggily, she slapped at her phone, turning the offending sound off.
Five o’clock in the morning, ugh.
Rolling over, she stared up at the ceiling in the darkness, ignoring the pounding in her head. That fourth glass of merlot the night before definitely wasn’t a good idea when she had an early wake-up call to begin training for the marathon she’d be a part of in eight weeks.

With a sigh she threw off her duvet, apologizing to Barkley, her large german shepherd, when the blanket engulfed his head. He left out an annoyed huff and peered at her, his displeasure at being awakened obvious.

“Sorry, buddy. But if I have to get up, you’re coming with me.” Serena swore he rolled his eyes at her before obeying and hopping down from her king-sized bed.

Padding into the bathroom, she blinked several times against the harsh light as she looked in the mirror. Taming her shoulder length brown hair into a ponytail, she splashed water on her face and added a bit of moisturizer to protect her skin from the cool morning wind. The days in her small town of Stockton Crossing were typically quite warm, however the mornings were known to be chilly.

Changing into her running gear, she laced her shoes and then grabbed Barkley’s leash, turning to look at him expectantly. He was laying on the large couch in the living room, his head resting comfortably on one of her throw pillows.

“Oh no you don’t. We’re in this together, mister.” She pointed at him and then herself with the end of his leash. “Those puppy dog eyes don’t work on me. I’m immune. I am,” she argued.

Barkley let out a low growl and rolled on his back, wagging his tail. Serena sighed and threw hands up in the air.

“Fine. Fine. But don’t expect any cookies,” she told him, watching his ears prick up at the word. “Damn dog knows those puppy dog eyes get to me every time,” she muttered as she locked her front door and tucked her keys into her zipper pocket.

Zipping up her hoodie, she started out at a slow jog down her driveway and onto the road that led to the trail that she’d mapped out to run every morning. Her music pumped into her ears from her little earbuds, pushing her to work her legs harder and pick up the pace.

Steadying her breathing, she settled into a run, enjoying taking in the view of tall trees and rolling green grass. Several small wildlife animals scampered across her path, startled by the snapping sound of twigs under her feet. Just over a mile and a half in, Serena focused on a spot several yards away, making it her goal. If she could push to that spot, she’d let herself stop for a few minutes for a sip of delicious water. A cool drink would be perfect, just what she’d need to loop back—“
Ooomph
.”

The breath was knocked out of her as she was tackled unexpectedly from behind, sending her crashing to the ground, her head bouncing hard off a large rock. The world around her swirled black for a few moments. She blinked up at the sky, wondering why the clouds were moving so rapidly as she tried to clear the fuzziness from her vision.

A shadow appeared in the right corner of her eye, an unmoving lump laying on the ground beside her. Had someone tripped and knocked her down with them? Ever cautious, she reached out a hand to touch the stranger’s shoulder, snatching it back when a moan escaped from the figure, startling her. A dark hood covered their head, it was impossible to tell if it was a man or a woman.

“Hey. Are you okay?” she asked, uncertain of what she should do. Instinct was screaming at her to get up and run, yet she couldn’t leave the person here unattended if they were hurt.

When there was no reply or further sounds, Serena decided that getting the hell out of there was her best option. Once she was far away she could send help back. Something about the situation was off, the tiny hairs on the back of her neck were standing on end, sweat beginning to crease in her brow. She pushed herself to her feet, wincing when the action made her head pound harder. She’d be lucky if she didn’t have a concussion. A few steps away, the stranger moaned again, letting out a yelp of pain. Conscience won out over sense and she turned back. Leaving someone who was obviously injured wasn’t something she could do.

Pulling her phone from the zipper pocket in her shorts, she called out in a shaky voice. “I’m going to get some help—” she broke off in shock when the figure leaped up from the ground. Realizing it was a man, she stumbled back in shock at the sight of his ski-mask covered face, landing hard on her ass in the dust. The impact jolted her, causing her already throbbing head to spin, her phone flying out of her hand, skittering across the ground a few feet away.

As she sucked in the breath to scream, she had a split-second view of a fist flying towards her face before everything went black.

A steady
tap, tap, tap
sound slowly brought Serena back to awareness. She was laying on a flat, cold surface, her hands and feet bound with thick rope. Struggling to sit up awakened aches and pains all over her body and she let out a groan as she made it into an upright position. She gingerly touched her eye, prodding the tender skin. She’d bet her life she was sporting a massive shiner. Her heart pounded in her ears as the reality of her situation sunk in. She was tied up. Tied up in some sort of fucking warehouse. Looking around, she tried to remain calm. The room she was in was large and freezing cold. The furniture was sparse, a set of wooden chairs lined the right wall and in the far left corner was an assortment of supplies. Buckets, brushes and a neatly stacked pile of chopped wood lay beside what looked like a gas burning fireplace. The only other object in the warehouse was one that terrified her.

A stainless steel hook dangled from the ceiling, suspended in the air by a thick chain. “What the fuck is that for?” she whispered to herself.

“Eager to find out already?” Serena whipped her head around at the man’s voice behind her. He was standing less than five feet away, a tall figure dressed head to toe in black, ski mask firmly in place. In his hands was a small box of matches that he was tapping from palm to palm in a consistent beat.

A Class Action by Gene Grossman
Spook Country by William Gibson
Alice Returns (Doxy Parcel) by Ryan, Nicole
Not Me by Michael Lavigne
Seven Days To Brooklyn: A Sara Robinson Adventure by Christopher Westley
I’m a Vampire…In Charge of Draculacare by Jackie Rose
The Gilded Crown by Catherine A. Wilson
The Bad Decisions Playlist by Michael Rubens
High Heat by Tim Wendel
Johnson Family 2: Perfect by Delaney Diamond
Our partner