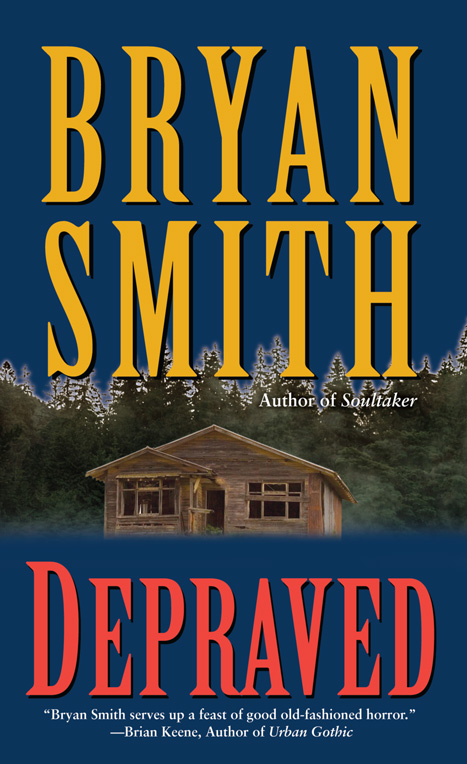 Something moved beyond the line of trees, a flicker of white passing through shadows.

Startled, Jessica squeezed the .38’s trigger. The bullet hit something alive. There was a cry of pain, followed by the heavy thump of a body hitting the ground. Another sound behind her spun her around, but this time her finger froze on the trigger as she saw a man step into the clearing.

A man, but not a normal man.

Too big and with a face like something out of a nightmare. Jessica could only stare at him.

More nightmares stepped into the clearing.

Jessica’s knees began to shake. The gun felt heavier in her hands now. She began to move backward, but heard another sound of snapping twigs behind her. She stopped. A hopeless thought streaked through her consciousness.
I’m surrounded
. She gave a moment’s consideration to putting the .38’s barrel in her mouth and pulling the trigger. Suicide was certainly a better option than whatever these monstrosities had in mind for her…

This one is for Keith Ashley and Matthew Shannon Turbeville.
Two of my oldest friends and readers of the original
Depraved.
How’s it feel to finally see that title in print, guys?

She’d been driving for hours by the time she finally found what felt like the right place. Hours in the heat of mid-summer in a car with no air-conditioning. The car was a relic. She could feel the springs through the worn-down-to-almost-nothing upholstery. A cracked cylinder casing made the engine very loud. A scruffy struggling musician named Hoke had wanted two thousand dollars for the red 1963 Ford Falcon Futura. A sometimes-employed session musician, Hoke had once upon a time played drums on a Top 40 country single. But he was broke.
Hoke is broke,
he’d said. It’d almost seemed funny at the time. But Nashville was full of guys like Hoke. Country slackers betting everything on a long-shot dream of hitting big in the music biz, forever fluttering around the edges of that elusive “break.” A great many of them wound up selling or hocking everything they owned to stay off the streets. She’d dated more than a few such dreamers. More than one had broken her heart, until she’d become hardened against the type. Which explained why Hoke’s cut-rate charm and easy grin had failed to move her. In younger days, she would have been all over him. Would maybe have dragged him into the Falcon’s backseat as an extra way of consummating the deal.

But that, as they say, was then, and this was—

The banging sound from the trunk again.

And then a muffled cry.

The cry came again, a voice turned hoarse and ragged from hours of intermittent screaming and pleading.

The Falcon’s radio was factory original. AM dial only. She’d thought she might look into ways of modernizing the sound system, while retaining the authentic original look. An XM or Sirius radio setup wired up under the dash, maybe. She’d read about such things. Would have been cool. But obviously that couldn’t happen now. She would have to ditch the car. She snapped on the radio and found a static-garbled gospel station. She left it there, knowing the antiquated radio would have difficulty locking on any signal out here in the sticks. The singer sounded vaguely like Al Green, so this was fine with her. She turned the volume up and the sound swallowed Hoke’s cries.

She glanced again at the gas-station map spread across the passenger seat and decided this was indeed the place. Old Fork Road ran parallel to the long-deserted town of Dandridge. In less than a mile from her current location it would branch off into a numbered rural route and wind deeper into the wilderness. She tapped her thumbs on the Falcon’s big red steering wheel and watched for the fork in the road. The car’s odometer was stuck at 62,536 miles, so tracking distance was a matter of guess-work. The road narrowed as it snaked and twisted. The tall trees to either side of the road shadowed the Falcon’s interior and provided welcome relief from the heat. But then an edgy feeling took root within her. She was sure she’d gone more than a mile on Old Fork by now. So where was the fucking fork in the goddamn fucking road?

She looked at the map again and almost missed it as she
clumsily steered the Falcon around a sharp curve in the road. She let out a screech and slammed the brake pedal to the floor. The Falcon’s tires squealed on the cracked and faded asphalt, and she heard a louder thump from the trunk over the gospel music. The sudden jolting stop had probably not been fun for Hoke.

An abrupt welling of tears stung her eyes.

“Why did you have to do it, you bastard?”

The sound of her own voice shamed her. The tears shamed her, as well. Not because she blamed herself in any way for what had happened. Fuck no. And not because she wasn’t entitled to feel the pain that was ripping at her soul. She just didn’t want Hoke to hear evidence of her misery, or to have even the merest shred of satisfaction over how thoroughly he’d wrecked her emotionally. She fought to keep her hand still as she reached for the gearshift and put the Falcon in reverse. She sniffled and blinked back more tears as she backed up and put the car on Rural Route 42.

Maybe because she was too trusting. Or maybe because he just didn’t seem like the type to take advantage of a woman. Too good-looking and too self-possessed. Something in his grin and the crinkle of his eyes told her this was a man who would never have trouble getting laid. Women of a certain type would flock to him. Buy him drinks in bars, instead of the usual other way around. And fall easily into bed with him. Certainly he would never need to force himself on a woman. These weren’t things she thought consciously as she negotiated the deal for the Falcon with him. They were just things most women would know on an instinctive level.

So she’d felt no trepidation when he’d invited her into
his ramshackle east Nashville house for a drink after they’d agreed to terms. The air-conditioned cool of the house felt nice after thirty-plus minutes of inspecting the Falcon in Hoke’s driveway. She accepted the bottle of Yazoo Dos Perros from him gratefully and closed her eyes after one delicious swallow, feeling a deep weariness in her bones as a result of too little sleep the night before. A long night of barhopping had taken a serious toll, and she looked forward to getting home with her new car so she could crawl into bed and catch up on her rest.

But thoughts of rest were vanquished the moment she felt Hoke’s hand on her waist.

Her eyes snapped open and she looked up at his grinning face.“What are you doing?”

His pale blue eyes twinkled.“Let’s have some fun, honey.”

He pushed himself against her and his other hand slid around her slim waist, settled at the small of her back, his callused fingers slipping beneath her black T-shirt to probe at her firm flesh. She cursed him and tried to push him away, but he slammed her against the edge of the kitchen counter and thrust his crotch at her. Terror gripped her as she felt his erection spring against her. She tried to twist away from him, but he held her fast and laughed at her. She raised the bottle of Dos Perros, but he swatted it away from her, and it shattered on the tiled kitchen floor.

“You’re being stupid,” she told him, thinking maybe she could reason with him.“You can’t do anything to me. You’d never get away with it.”

He licked his lips and looked at her breasts, which looked ripe beneath the stretched-tight fabric of the V-necked T-shirt.“Oh, yeah? How ya figure?”

“My roommate knows where I am, for one thing.”

He lifted his gaze and looked her in the eye then.
“Outside you told me you lived alone. Get your story straight, sweetheart.”

He reached for the button of her sexy designer jeans. She screamed and clawed at his eyes. He swatted her hands away, but not before one nail bit into skin and etched a bloody groove across his cheek. He yelped in pain and drove a fist into her stomach. The blow blasted the air from her lungs and sent her reeling to the floor. Then he was on top of her, and there were more blows from his hard fists. His face changed during the assault. The easy grin was gone, replaced by an almost feverish look of hatred and desperation.
Why,
she wondered, the word repeating in her head over and over…

But there would be no answer to that question.

He got her clothes off and did what he wanted with her. When he was done, he left her there, nude on the kitchen floor, spilled beer soaking the tips of the long blonde hair spread around her head like a fan. She should have grabbed her clothes and run then. It would have been the logical thing to do. But she wasn’t thinking in a logical manner by that point. She’d barely been thinking on a conscious level at all. She stayed there on the floor while he wandered in and out of the kitchen, whistling an old Hank Williams song, sounding as if he didn’t have a care in the world. Then he disappeared for a while. When he came back, he was fully dressed again. The familiar grin was back in place as he stood over her, but there was a coldness in his eyes now. A deadness. How could she not have seen it before? Surely she would have seen it, if she’d just looked deep enough. But no. This asshole had the air of a man well schooled in the art of obscuring the truth about himself.

The grin became a sneer.“Get your clothes on and get out. I’m keeping the car.”

His words broke the mental paralysis gripping her. She got shakily to her feet and retrieved her clothes from the floor, some of which were soaked with beer. She put them on, retrieved her purse from the kitchen counter, and walked out of the house without a word. She walked down to the bus stop and waited for the bus that would take her home. She exited the bus at her usual stop and went into her apartment just long enough to change clothes and fetch the .38 her army-captain daddy had given her for her eighteenth birthday. Then she left and caught a bus back to Hoke’s place.

She didn’t show him the gun at first.

Just looked at him when he opened the door and said, “I want it again.”

And he laughed and said,“Had a feeling you were the type. Come on in, honey.”

Once the door was shut behind her, she brought out the gun and said,“We’re going for a ride in my Falcon.”

So now here she was, driving a stolen car down a back road in the middle of nowhere with a man she planned to murder stowed in the trunk.

Yes, it had been quite a fucking day so far.