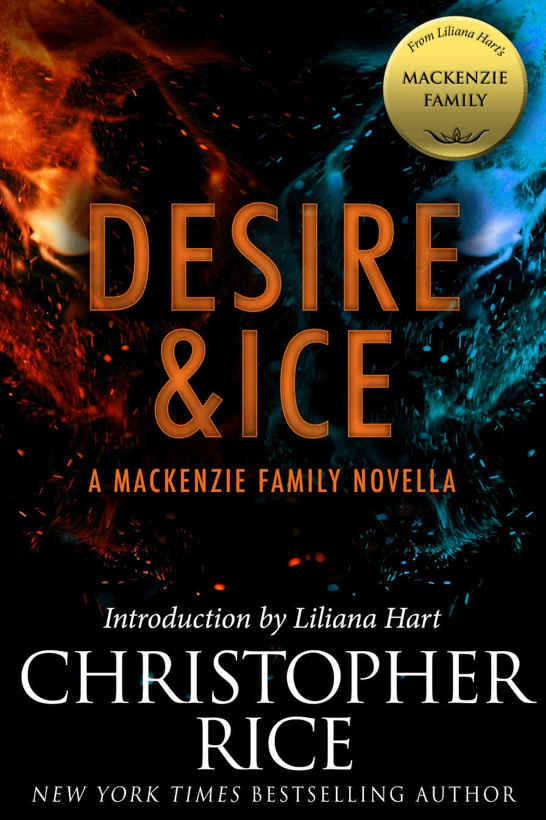 Danny Patterson isn’t a teenager anymore. He’s the newest and youngest sheriff’s deputy in Surrender, Montana. A chance encounter with his former schoolteacher on the eve of the biggest snowstorm to hit Surrender in years shows him that some schoolboy crushes never fade. Sometimes they mature into grown-up desire.

It’s been years since Eliza Brightwell set foot in Surrender. So why is she back now? And why does she seem like she’s running from something? To solve this mystery, Danny disobeys a direct order from Sheriff Cooper MacKenzie and sets out into a fierce blizzard, where his courage and his desire might be the only things capable of saving Eliza from a dark force out of her own past.

A DENSITY OF SOULS

THE FLAME
: A Desire Exchange Novella

I can't thank Liliana Hart enough for inviting me to into her world and allowing me to play around. And as always, profound gratitude to the wonderful and talented team at Evil Eye - Liz Berry, M.J. Rose, and Kimberly Guidroz, as well as Asha Hossain and Kasi Alexander.

An Introduction to the MacKenzie Family World

I’m thrilled to be able to introduce the MacKenzie Family World to you. I asked five of my favorite authors to create their own characters and put them into the world you all know and love. These amazing authors revisited Surrender, Montana, and through their imagination you’ll get to meet new characters, while reuniting with some of your favorites.

These stories are hot, hot, hot—exactly what you’d expect from a MacKenzie story—and it was pure pleasure for me to read each and every one of them and see my world through someone else’s eyes. They definitely did the series justice, and I hope you discover five new authors to put on your auto-buy list.

Make sure you check out
Troublemaker,
a brand new, full-length MacKenzie novel written by me.
And yes, you’ll get to see more glimpses of Shane before his book comes out next year.

So grab a glass of wine, pour a bubble bath, and prepare to Surrender.

An introduction to the MacKenzie Family World by Liliana Hart

Discover the World of 1001 Dark Nights

An excerpt from Dance of Desire by Christopher Rice

"Danny Patterson," Sheriff MacKenzie growled. "If you follow your hormones into the middle of the worst blizzard to hit this town in years, you're gonna be looking for another job, son, I promise you!"

Danny was willing to bet serious cash his boss wanted to use a different word than hormones, a word not quite suitable for public broadcast. But Cooper MacKenzie managed to keep things clean when he was speaking over the police radio, even when he'd just been forced to grab the mic from the dispatcher because one of his deputies had disobeyed an order.

At twenty-three, Danny was the youngest member of the department, and unlike his fellow deputy, Lane Greyson, he didn't have a second of military experience. That explained why, even though he'd been wearing the badge for over a year, everyone in the department still called him
The Kid
.

It meant always be willing to prove that yes, he really did belong in the department despite his age and lack of experience. That the chance Cooper MacKenzie had taken on him was going to be worth everyone's while. Sometimes it meant being the first to volunteer for grunt work, like rounding up wayward steer during a torrential downpour and corralling them through a gauntlet of aspen, as he'd done just a few weeks before. And it always meant being the first to follow orders. Always. And yet, here he was, going rogue on the eve of one of the worst snowstorms to hit Surrender in decades.

"She's up there by herself, boss," he responded. "When I saw her this afternoon she said she was headed to the old Laughlin Place."

"Yeah, I heard you the first time," Coop said. "Lot of people are going to be on their own during this storm and we gotta be ready to help all of 'em. So explain to me, why is it you're not pulling a u-ey and getting back to the station like I said?"

"Laughlin Place's been empty going on three years now
.
You really think she's got a working heater up there?"

"What I
think
is Eliza Laughlin grew up in Surrender and she knows how to handle a snow storm. Alone."

"She's been gone a while, sir. She might be out of practice."

And she's Eliza Brightwell again,
he thought.
I checked.

"And she's not your teacher anymore either, is that it?" Coop asked.

"Sir, should we take this to cell phones?"

"Oh, I bet you'd like that, wouldn't you? No. Let's stay right here on radio so I can let everyone with a scanner know that Danny Patterson's disobeying an order from the sheriff because of some schoolboy crush he can't let go of."

He had nobody to blame but himself for this dig.

He'd always had a reputation for flapping his gums. When he'd worked as a ranch hand fresh out of high school, the other men had worried the cattle might all drown themselves just so they wouldn't have to hear any more of his questions about weather patterns and plant life.

It was a mistake, telling Coop about his run-in with Eliza down at Rawley Beamis's wilderness store just that afternoon. He should have just kept to himself how concerned he'd been to see his former teacher rushing through the aisles as if her life depended on her next purchase. Make that his still radiant, still beautiful former teacher; the same woman he'd fantasized about for years during English class, wondering what she thought about when she got that faraway look on her face while her students were bent over their tests. Wondering if he could grow up to be the man she thought about in those quiet moments.

Surrender was a small town, around 3,000 residents at last count. Maybe if the town, and the high school, had both been just a little bit bigger, Eliza wouldn't have ended up being Danny's English teacher for four years straight, a length of time during which his attraction to her went from innocent crush to full-blown desire. But there was no changing the past, or the size of his hometown, for that matter. And, given his racing pulse when he'd laid eyes on her again for the first time in years, there was no changing his attraction to Eliza Brightwell either.

Still, he should have kept all this to himself and never should have uttered a word of it to Cooper MacKenzie or anyone else in Surrender.

The town was just too small for secrets. A postage stamp of a place, really, nestled snugly at the bottom of a hill, with hundreds of acres of pastureland on either side of one long road. The surrounding mountains were so beautiful they could make atheists into believers, but like all small towns, people here didn't put much stock into minding their own business. It just wasn't possible.

But if Cooper MacKenzie had minded his own business, Danny wouldn't have a badge, a Smith & Wesson, or the patrol car he was currently using to disobey the man's order. He'd probably still be working as a hand out on the Proby Ranch, bored out of his mind and driving all the other men crazy with his constant talk.

True, he'd loved working outdoors, had loved the changes backbreaking work had made to his once gawky body. But then one night when they were all drinking at Duffey's Bar and Grill, Sheriff MacKenzie had overhead the boys giving Danny a ream of crap about his perpetually running mouth. Big Caleb Watson, their resident Texan, had said the words that finally drew the sheriff over to their table. "Danny, I swear to God, how many times can we identify every type of tree on that spread? If you wanted to be a botanist, you should have gone to the damn college." When he saw the sheriff standing over him suddenly, Danny thought the man might know more about his story than the rest of them did.