Desire of the Gladiator (Affairs of the Arena Book 3) 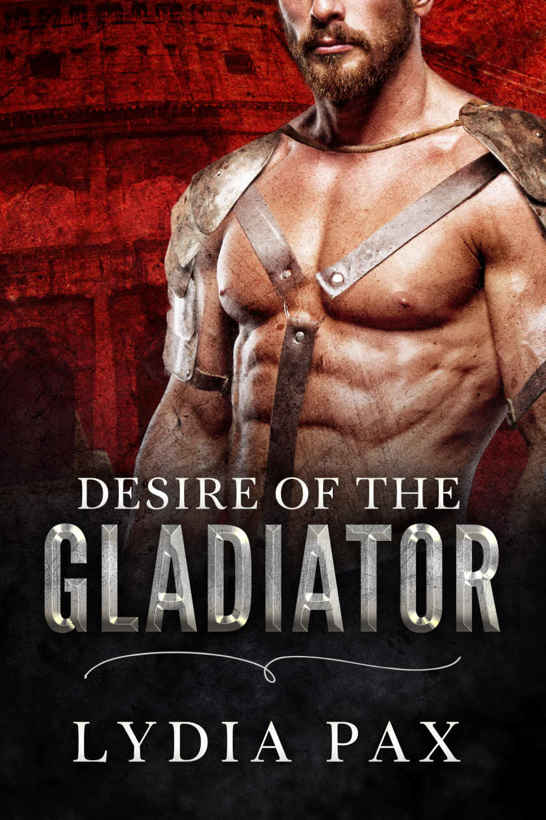 Affairs of the Arena, Volume 3

DESIRE OF THE GLADIATOR

Further Reading: Heart of the Gladiator

W
ant to get the latest new releases from me and offers for free Advance Review Copies before anyone else?
Sign up for my new release newsletter!

Leda carefully made little acknowledgment of the words. The less this one knew about how much she could speak, the better.

She was a princess, even if she was held in slavery. There could be no trafficking with a low sort like a gladiator, no matter how terribly he may have made her heart race.

He walked near her in a short wagon train toward the city of Puteoli. They traveled from the ludus of House Varinius to the arena, where there were to be a great series of games that day.

Today was warm—it was summer, and so far it had been a dry summer. The road was paved over with stones—Romans did love their roads, if nothing else—and a great many carefully arranged trees and bushes grew alongside the path. The plants were not largely brown and twisted; the last precipitation had been sometime in the late spring, when a series of storms had landed on the peninsula.

The “beast man” who spoke to her was named Conall, though she found it difficult to think of him as a true man. Or most any gladiator, to be honest. They were a brutal, mean lot, more concerned with the best ways to kill. None would ever imagine that life without a sword in their hands was more worth living than their own feckless pursuit toward glory and honor before the mob.

The wagon train held all the gladiators from the Varinius ludus, as well as a great many slaves and attendants to ensure their health and well-being. Most prominent of these were the handful of doctores, among them the head doctore, Murus—a thick-set man who had been training gladiators for House Varinius for years. There was also a rather large contingent of armed guards to ensure that the gladiators did not attempt escape.

A gladiator like Conall, who had been a loyal veteran for more than two years, was given some leeway to walk the short distance to the town without his hands in manacles—unlike the less-initiated gladiators.

Leda had arrived at the ludus a little less than a year before. In her own country, there were not gladiator games, and so being the property of a gladiator school—where men were taught how to kill and make a show of killing for the frenzied crowds of the arena—was strange and frightening, to say the least.

And, if she were completely honest, the cause for some terribly distracting thoughts from time to time. The gladiators were dangerous, cocky, and trained their bodies to the pinnacles of masculine perfection.

Conall may have been a beast of a man, but he was still a man—and a well-formed one at that. Every muscle was carved from stone, and every feature ruggedly handsome.

His was the sort of body and build that a woman could use in her imagination when she wanted to forget her problems, when she wanted to fantasize about a wild man arriving in her bedchamber and insisting that their lovemaking be passionate and last for hours.

While she had zero intention of ever returning his attentions, Leda was still flesh and blood. That she was attracted to Conall was undeniable. All the allure of his body—and that dash of extra spice from the natural danger he presented as a trained killer. Sometimes, in moments of weakness, her mind got away from her.

The trouble was that when Conall was present, those moments of weakness regularly presented themselves.

But she knew, with iron-clad conviction, that all of that was ultimately immaterial. Her attraction made him no less of a beast, and no more worthy of her time.

She was from the Kingdom of Armenia, far away from the Italian Peninsula. It was an area used—much to its chagrin—as a buffer state between the militant Roman Empire and the perpetually tumultuous Parthians in the East. As such, as a princess in the court of her father the king, languages were a top priority since early childhood. Her understanding and pronunciation of the Latin tongue was precise, controlled, and fluent.

However, in the cosmopolitan empire of Rome, inhabitants rarely made assumptions about what a person could speak. With her deep brown skin and jet black hair, many Romans simply assumed she was from some “uncivilized” Eastern country with no understanding of Latin at all.

“I think I will win,” said the beast man. “How about I dedicate the win to you?”

He stepped forward, clearly hoping to catch a look into her eyes. He had spoken many times of the radiance of her eyes burning in his heart. Something Leda had noticed was that, when a man didn’t think you were listening, he was likely to get ever more poetic in his compliments.

She carefully saw a bird in a nearby tree, focusing her attention on it and removing his opportunity to look into her face.

It would have been sweet, perhaps, except for two reasons. The first was that she took any comments on her “beauty” with heavy doses of salt. Mines of the stuff, in fact, occupied by slaves of her memories growing up in court, when she always had too much heft for the latest dresses and her family regularly chastised her for not being as pretty as her sisters, Gaiane and Endza—as if her appearance were a suit she were wearing, perhaps, that she could change at any time.

Any comments on her looks—any at all, even if they were kind in intention—only brought up a heavy dose of a childhood of inferiority to overcome. Then she had to deal with
that
, and so every compliment was an obligation in disguise.

The other reason she did not find his comments sweet was that Conall was utterly beneath her. To indulge him in the slightest would be to admit that their positions held some measure of equality, which was incomprehensible to her.

Leda wasn’t quite the princess her sisters were. Sold into slavery now, she might never be. But there was enough of it there to know that consorting with some barbarian madman from the Germanic countries was the lowest, roughest sort of relation she might ever have.

And not only was he mad and a barbarian, but he was a gladiator to boot—the grimy bottom of the foundation of the blood-obsessed mess that was Roman society.

It was bad enough just that she had to listen to him. She called him a beast man because he looked the part—his hair was wild and long, stretching in a reddish-brown mass past his shoulders. His beard was similarly long and thick, hiding his neck entirely and flaring out wildly as he exerted himself during training and fights.

Though he had the archetypal sturdy, chiseled build of the gladiators, he was short—almost as short as Leda, who herself was quite short for a woman. He was too short to even be a gladiator, except that he fought like a demon in the arena and won so many of his fights.

It had been clear since the moment he started talking to her, some seven months before, that he was absolutely smitten with her. He had never once overstepped his bounds, never touching her nor trying to corner her. Always, he had been friendly and helpful when she was deep in her tasks for the day and he happened across her.

But none of that mattered. He was a beast man, and she was a princess; whatever fantasies were in his mind were just that—fantasies.

They entered the gate of Puteoli, the heavily armed legionaries at the gates standing aside to let the wagon train through.

“I think,” Conall said, “once you properly learn the tongue here, I’d like to know what you were thinking while I was talking with you. We’ll talk about it and laugh over my winnings today. How’s that?” She was silent, of course. He chuckled briefly and clapped his hands. “Good. Great. I’m glad that’s settled.”

Leda stifled her laugh, disguising it with a series of coughs. He did have a sense of humor.

But Leda was a princess, and one day this whole mess about her slavery would be sorted out, and she would return to court. There could be no stains upon her honor in the meantime—and certainly none so large as consorting with a low-born beast of a gladiator.

A
nother brutal blow landed from the secutor’s ax, and Conall lost his footing. Fumbling through the sand, he barely managed to roll out of the way of the follow up blow. It would have crushed his skull. Instead, it set off a small eruption of sand, spraying over the secutor and covering—momentarily—Conall’s retreat.

The crowd all around him was noise and foam, shouting and spittle, urging only for more action.

His face was bloodied already from the initial minutes of the match. He dove in too quick, abandoning all reason as he always did, and hoped that his instinct would guide him as it had in the past.

Instead, his instinct guided him to a face full of a heavy secutor’s shield and a probably broken nose. It was hard to breath, and the blood running from his face and forehead made him woozier by the minute.

Back up on his feet, Conall tried to regroup and rethink. He held a sword in either hand in the characteristic dimachaerus style. His armor was light—a heavy cloth manica around his right arm, leather greaves over his knees and calves, and a thick, tall leather belt just above his loin cloth. His face—his head—was uncovered entirely. As he moved, his hair and his beard would fly around him, creating waves of motion that delighted the crowd.

Normally, a gladiator fighting without a helmet had to be handsome. Conall didn’t know if he was handsome by Roman standards or not, but he knew with his beard and his hair, the crowd wanted to see him in the arena.

An old Roman emperor, they had told him, son of a freed slave. It was a good name—good for cheering—and Conall liked it.

He rushed his opponent with a yell, swords clanging off his heavy shield. The secutor pushed him back and slammed him back against the sand again. Immediately, Conall stood up, ready for more.

Conall had never yielded in a fight.

He had been beaten, of course. Knocked out. Knocked down so many times he could not even move his arms to show the missus even if he wanted. But even then he had not yielded. He could not.

The truth of the matter was that the arena was the most honest place he knew. And within its confines, the truth about Conall came out. He did not care if he lived or died.

And so he fought with abandon, and sometimes he lost. Most of the time, he won.