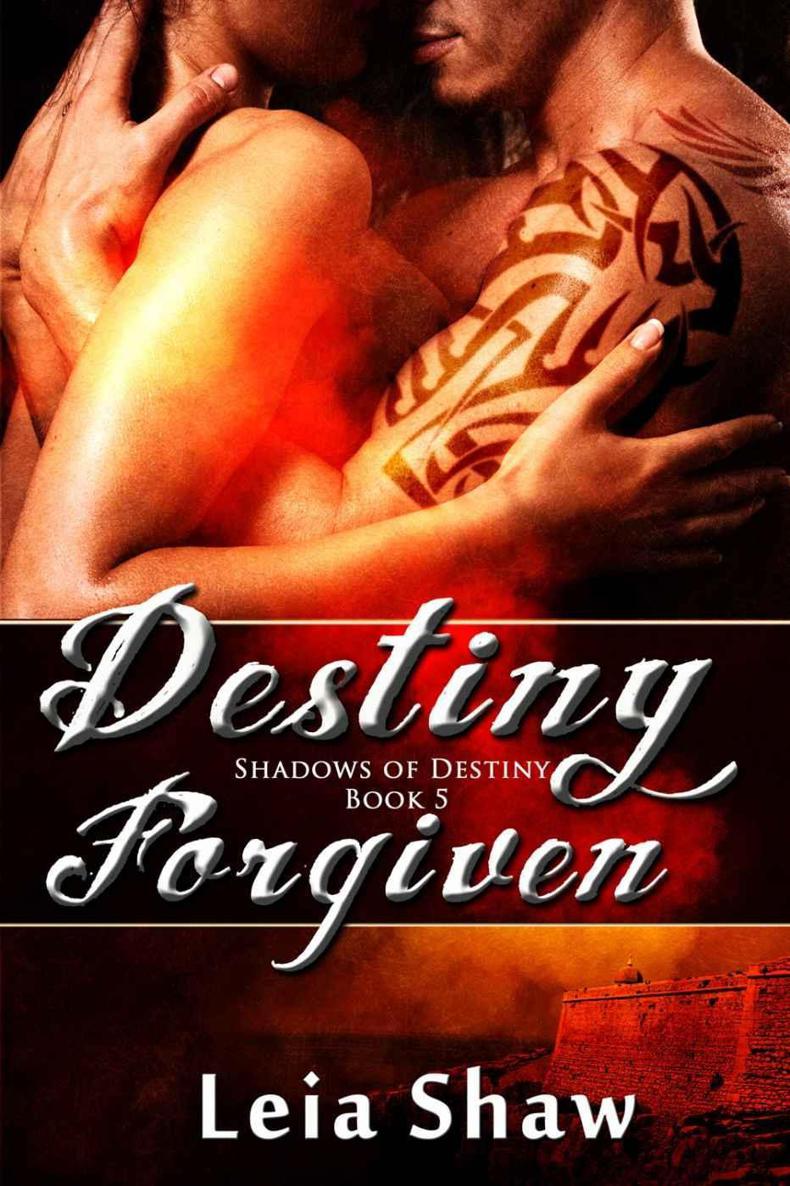 All Rights Reserved. No part of this book may be reproduced in any form except for the inclusion of brief quotations in review without written permission from the author.

To Mercy, with love

They say the screams could be heard a mile away from the ominous fortress. His mind was strong. It took longer than anticipated to break it. But
Marwolaeth Du
was known for far worse than breaking the will of strong men.

After many long months, the man who woke children at night with his terrified screams came out of
Marwolaeth Du
a changed man. A man with a soul as stained as the fresh ink on his skin.

I wish love and duty were one and the same. I’ve never been good at making decisions.

Maddox to Felicity in a letter, January 2003

Felicity brought her knees to her chest and hugged them, fighting the cold in the drafty cell. She winced in pain when she clasped her hands together.
Her captor had almost broken her wrist. Her nose felt enormous and she’d bet her eyes were black and blue. They’d banged her up pretty good.

She was no stranger to pain. It was an occupational
hazard of being a rebel.
The
rebel. Oh, they’d have fun getting information from her. The Sorcery Council was known for being harsh when it came to flushing out the rebellion.

A shudder rocked her.
The cold floor was seeping through her worn-out jeans and making her ass numb. Her eyes had finally adjusted to the constant dark. Trying to read the messages etched into the wall broke up the boredom at least, even if it did add to her terror. But she would not break down and cry. If this was her fate, so be it. She’d die for something she believed in. There was no shame in that.

Her stomach growled, reminding her she’d been there long enough to have missed several meals. She shifted her stiff body on the hard floor and groaned.
Being a martyr sounded so much better on paper. Maybe her courage did outweigh her sense, like Dalton always said.

Dalton
. The reminder sent a twinge of pain through her chest. She hoped he was okay. How many of her friends had been caught when the mission had failed? Were they there in the same prison, only a few yards away? The walls were so thick she couldn’t hear anything outside the cell. She’d give the Council anything if they left her friends alone.

There she was, being all brave again. Sometimes her heart steered her places her brain knew
she shouldn’t go. Like into the recruitment camp that night. And now she was going to pay.

The steel door opened and a guard entered, pointing a gun at her chest. “Get up. You’re
going to see the Inkman.”

Inkm
an? Well that didn’t sound so bad. What was he going to do? Scribble some notes about her?

The gun was effective at getting
her moving. Shapeshifters, unlike werewolves, were one of the mortal supernatural races, which meant she could be killed like a mortal – gunshot wound, sword through the heart, bludgeoning in the head, all that gory stuff. If only she could shift, she could’ve gotten the hell out of there a long time ago.

She scratched at the metal band around her upper arm. It still ached where the hundreds of needles stuck in
to her skin – a magic device to keep her from shifting. Without her magic, she felt so empty.

The guard led her down the dimly lit hallway. Overhead lights swung on wires from the ceiling, reminding her of a basement in a horror movie. The kind where sickos hacked their victims to pieces and kept them in jars in the refrigerator. Another shudder crept through her.

He opened the door to a room containing only a table and chair. What appeared to be a one-way mirror ran the length of the wall. Was that where Inkman was taking notes?

“Sit down.” The gua
rd gestured to the chair. “Inkman will be here soon.” He grinned down at her when she sat. “And I suggest you behave. He’s not someone you want to mess with,
shifter
.” He spat the last word as if it tasted dirty in his mouth.

Under the fl
uorescent lights, she got a good look at the guard. She was surprised to find him attractive. Someone she might have even considered going on a date with. Well, if he wasn’t keeping her starved and dehydrated and quite possibly about to torture her.

Without another word, he turned around and
walked out of the room, slamming the door shut behind him. She stared at it, wondering if she should even bother to check if it was locked.

She didn’t. Instead
, she sat in the chair like a good prisoner, awaiting what fate had in store for her. At least it was nice to be outside of that dark, cold cell. She turned to glance at the mirror then did a double take. She barely recognized herself. Raccoon eyes, dried blood under her nose, a fat lip. Was it really going to end like this? Her throat closed up.

Do not cry, Felicity.

She blinked once and the urge was gone. With trembling hands, she tried to tame the strands of black hair sticking up on the top of her head.

Trying to impress someone
?,
her subconscious sneered.

She placed her hands in her lap. A girl should look decent for her torture, shouldn’t she?

She sighed and shook her head. She was losing her mind already. They’d break her like a twig.

The door creaked open. A man stepped into the room.

The first thing she noticed was his bald head. Under his crisp green uniform, muscles bulged. And covering his scalp, neck, and bare arms were dozens of tattoos.

Inkm
an. Now she got it.

His lips were pursed in a flat line. The tendons in
his neck were tight strings. His hands clenched into fists at his side. The man was a wound-up ball of angry muscle.

She gulped, then finally looked
into his eyes, afraid of what she’d find there.

Big and round, deep brown with a spattering of yellow.

Wait a minute. She squinted and looked again. She’d know those eyes anywhere. Hope started in her chest then flooded her with warmth, making her grin. Her mind took her back to the last time she’d seen those comforting eyes.

“Let’s run away together,” Maddox said, jumping from rock to rock across the creek.

Felicity sighed and sat down on the bank, dipping her bare feet into the cool water. Her heart ached for her best friend. His life was coming to an end at age twenty. “And where would we go?”

“To the coast. A small fishing village.” He jumped to the opposite bank then turned around to do it again.

“Do you even know how to fish?”

“And what would I do while you went fishing every day?” She smiled, indulging his fantasy this one time.

“Um.” He thought for a moment then grinned. “You would sing.”

“You have an awesome voice.” He took a final leap then landed in front of her. Grabbing her wrist, he pulled her to her feet. They walked,
hand in hand, through the green meadow. The same meadow they’d spend years playing hide-and-seek in as children. “You could sing and we’d go swimming in the ocean every weekend.”

She gave him
a sideways glance. “Who am I, the Little Mermaid?”

He laughed
, then broke into a song from the movie.

“I’m serious, Maddox!” She
bit her lip to hold back a smile. “Life can’t always be fun and games.”

“The world. The gods.” She sighed in exasperation. “Everyone!” When he continued to sing Disney songs, she added, “Your father.”

He froze and she almost regretted it. His expression sobered.

Then she did feel guilty. She placed her hands on his forearms and looked him in the eye. “I’ll miss you, Maddi.” Grief lodged in her throat. “I’ll miss you more than anything.” She barely choked out the words.

He frowned down at her, his eyes full of sadness. Hesitantly, he touched her cheek. “Don’t say that. It’s not forever.
”

A pair of heavy hands slammed onto the table, startling her out of the memory. She looked up into those
familiar eyes. Her Maddox was here.

“Maddox.” She jumped up and reached for him.

“Sit down, shifter!” His booming voice echoed off the empty walls and made her flinch.

Eyes wide, she stumbled back
, then fell into the chair.

She peered up at him, a cold sense of dread sliding through her. Those eyes…the ones that had always represented warmth and fun, hardened
and narrowed into cruel slits. This was not the Maddox she knew and loved – the lighthearted, mischievous boy she’d spent summers chasing and laughing with.

No, this was a very different Maddox. One that made her chest ache and her knees tremble with fear.

What the hell happened to him?
Maddox had turned into her worst enemy.

For Life by L.E. Chamberlin
Numb: A Dark Thriller by Lee Stevens
The Great Bear: The Adarna chronicles - Book 3 by Jason K. Lewis
Alphas Unleashed 2 by Cora Wolf
The Admiral and the Ambassador by Scott Martelle
Rich Rewards by Alice Adams
Brood of Bones by Marling, A.E.
The Many Deaths of the Black Company (Chronicle of the Black Company) by Cook, Glen
The Facts and Fictions of Minna Pratt by Patricia MacLachlan
Tide Will Tell (Islands of Intrigue: San Juans) by Lesley Ann McDaniel
Our partner