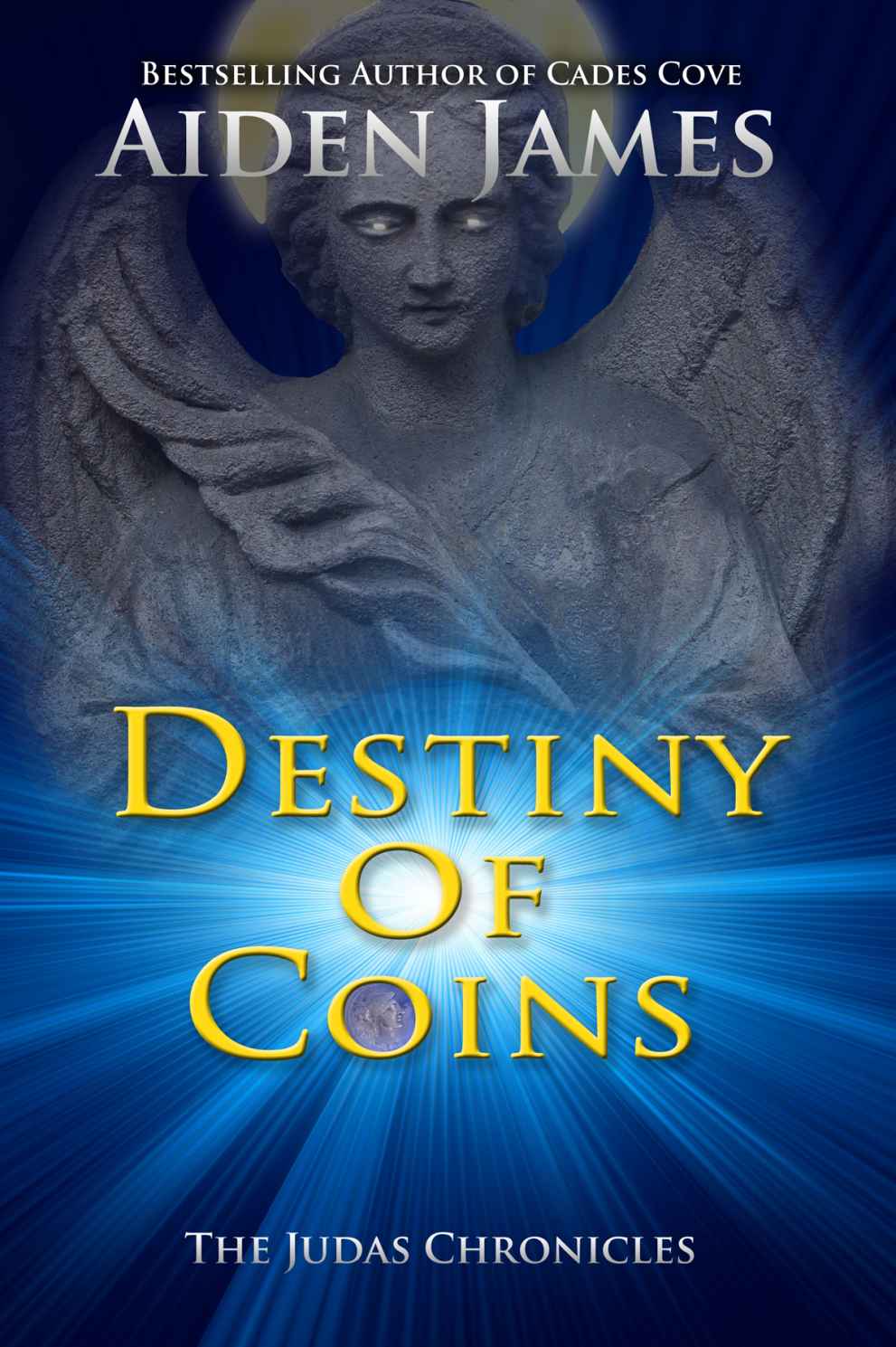 Based on an Original Concept by

“Aiden James has written a deeply psychological, gripping tale that keeps the readers hooked from page one.”
Bookfinds review for “The Forgotten Eden”

“
A variety of twists, surprises, and subplots keep the story moving forward at a good pace. My interest was piqued almost immediately and my attention never wavered as I forced my eyes to stay open well into the night. (Sleep is overrated.) Aiden James is a Master Storyteller, whose career is on the rise! Out-freaking-standing-excellent!”
Detra Fitch of Huntress Reviews, for “Plague of Coins”

“The hook to this excellent suspense thriller is the twists that will keep readers wondering what is going on as nothing is quite what it seems. Adding to the excitement is that the audience will wonder whether the terror is an evil supernatural creature or an amoral human…Aiden James provides a dark thriller that grips fans from the opening.”
Harriet KLausner, for “The Forgotten Eden”

“Aiden James writing style flows very easily and I found that Cades Cove snowballed into a very gripping tale. Clearly the strengths in the piece were as the spirit's interaction became prevalent with the family…. The Indian lore and ceremonies and the flashbacks to Allie Mae's (earthly) demise were very powerful. I think those aspects separated the work from what we've seen before in horror and ghost tales.”
Evelyn Klebert, Author of “A Ghost of a Chance”, “Dragonflies”, and “An Uneasy Traveler” for “Cades Cove”

“The intense writing style of Aiden James kept my eyes glued to the story and the pages seemed to fly by at warp speed…. Twists, turns, and surprises pop up at random times to keep the reader off balance. It all blends together to create one of the best stories I have read all year.”
Detra Fitch, Huntress Reviews, for “The Devil’s Paradise”

“Aiden James is insanely talented! We are watching a master at work….Ghost stories don’t get any better than this.”
J.R. Rain, Author of “Moon Dance’ and “Vampire Moon” for “The Raven Mocker”

Destiny of Coins by Aiden James

This ebook is licensed for your personal enjoyment only. This ebook may not be re-sold or given away to other people. If you would like to share this book with another person, please purchase an additional copy for each person you share it with. If you’re reading this book and did not purchase it, or it was not purchased for your use only, then you should return to your favorite ebook store and purchase your own copy. Thank you for respecting the hard work of this author.

The heavy, gray mist hovering above D.C. had become an impenetrable blanket of gloom for the past four days. Thanksgiving would be here in less than a week, and I daresay the upcoming holiday was the only thing keeping the city from falling into a serious funk. In the past, I would have welcomed such melancholy, since for centuries it had acted as a balm to ease the loneliness of my sentence to walk the earth largely alone. But the light that had entered my life years ago in Glasgow, Scotland after World War II had returned to me in this second decade of century twenty-one. Beatrice. Beatrice, whom I once deserted foolishly in fear of happiness, had given me a new lease on life. Or, perhaps more accurately, a new perspective on what it takes to be truly happy.

We are together again. And, although there are moments of awkwardness between us as we become fully acquainted once more, there is incredible joy. Joy fed by a profound love that has always mystified me by its strength and ability to consume all that is negative and change it into something truly positive.

Why do I wax so eloquently about my dear wife and what she means to me? Well, for starters, I am deeply in love with her. Not to mention, two and a half years ago I expected to lose her to old age, as she withered away in her nursing home bed. She is healing now, and seems to all who meet her to be a miracle at eighty-seven, when she doesn’t look a day over sixty. Such is the benefit of owning a handful of crystals once part of the Tree of Life, which is now forever reburied in the remote mountains of Iran.

Of course, as the man whom most people assume is her grandson, I’d surely raise many more disbelieving eyebrows to consider my next birthday will be number two thousand and sixteen. Especially, since I occasionally still get carded at the local liquor store, which sits just around the corner from our son Alistair’s penthouse condo the three of us share, along with his girlfriend, Amy Golden Eagle.

This brings us to the other reason I’ve been thinking about my dear wife and what she means to me. I was on my way to the aforementioned liquor store to meet a friend I hadn’t spoken to in nearly a year. He sounded worried on the phone, and in a predetermined code from long ago, he had directed me to meet him in the very back of Allegiance Wine and Spirits.

“You’re looking good, Judas,” said Roderick Cooley, as he surveyed the array of chilled lagers in the store’s refrigerated section. “Or, should I be addressing you still as ‘William’, the name you hated when I first gave it to you in 1908?”

“Only people under the age of one hundred and ten years get to call me William,” I joked, extending my hand to take his. As expected, we gave each other a hug with hearty back slaps. I had missed him more than I realized. “I’ll always be ‘Judas’ to you, and you shall always be ‘the pale faced druid’ to me.”

He chuckled while casting a casual glance toward the front of the store.

“There is happiness in you that I don’t readily recall ever seeing before,” said Roderick. “Beatrice’s recovery must be coming along famously.”

He reached toward the bottom of the open case before him, pulling out a twelve-pack of Killian’s Red. I had assumed he would reach instead for the bottled ale from his Irish homeland instead of an Americanized version.

Roderick is almost as old as me, joining the immortal ranks when a druid ritual, designed to keep the Romans at bay, failed to take his life in a frigid black-water bog. He emerged at sunset that winter solstice very much alive from the ordeal supposed to drown him. Instead, his skin and hair had permanently turned white as snow, and his brilliant blue eyes forever after contained golden flecks floating within his irises. Very disturbing to witness for most people, I’m sure. It’s the reason he wears sunglasses when venturing out in public. As for his vampire-like complexion, he has resorted to a number of remedies down through the centuries to camouflage that aspect. Lately, the wonders of MAC products have given him the upper hand on his pale affliction.

“You’ll love Beatrice, when you finally meet her in person,” I assured him. “If I had known you were coming earlier, you could join us tonight for dinner at The Inn at Little Washington. I’m sure it won’t be a problem getting your name added to the reservation.”

He nodded thoughtfully and looked away. For him to make the six-hour drive from his historic estate nestled in the western corner of Virginia to Washington, he had to have an urgent reason for doing so. Something was up. Something big.

“Perhaps, I shall,” he said. “But after hearing the news I’ve chosen to deliver in person, you may decide to spend this night with your dear wife, as well as your boy and his girlfriend, without my intrusion.”

I carefully scanned the entire store, making sure to be nonchalant. We had foregone our usual precautions, such as encrypted texts and emails, in exchange for a brief phone call. Now, it seemed to warrant extra scrutiny to make sure we were unnoticed by all who passed.

My mouth suddenly felt like sandpaper. My intuitions had been heightened for the past few days. Something nagged at me from the back of my mind, though until this moment I wasn’t quite sure what it meant.

“How closely have you been following the international news?”

“Not too much…just mainly the events highlighted on MSNBC every night, and the Yahoo scroll on my laptop,” I said, fearful he might sense the ruse covering the hours I had spent trying to get details on one particular event.

“Hmmm…doubtless you’re aware of the bomb blast that killed two cardinals at the Vatican,” he said. “It’s hard to notice every terrorist attack these days. But this one claimed the lives of nearly a dozen other clergy working in the archives when the bomb exploded, making it hard to ignore.”

“Yes, I remember reading the tagline on that one.” I turned my attention to the refrigerated Guinness Extra Stout. Might need a few of these fairly soon.

He laughed, drawing my gaze back to him. I hated the fact I couldn’t see his eyes’ expression behind protective lenses.

“Why do you play this game with me?”

Roderick’s voice had been muted, but suddenly surrounded me. Doubtless, I had spurred his ire by being coy.

My turn to draw him out…. We should quit the charade, this dance around the pink elephant that had just emerged between us.

“All right,” he said, allowing a slight smile to tug at the corners of his thin lips. “I’ll spell it out, since you already know why I’m here. Plus, I’ll give you details your limited access to ‘need to know’ information has prevented you from finding in your searches. The archives wing that was destroyed once housed a precious collection of journals, diaries, and other ancient tomes from the Franciscan order. They spanned from the mid-thirteenth century to the early years of the twentieth century. Beyond priceless, it’s been assumed nearly all of them were destroyed in the blast. We would have been content to allow this conclusion if not for a certain image caught by three of the surviving security cameras.”

I didn’t want to believe it, and I shook my head in disbelief. I had watched an enormous whirlpool swallow my archenemy and carry the bastard somewhere deep inside the earth, far below an island cave just outside Hong Kong. That was seventeen months ago. Even as immortals go, surviving something so intense is unheard of.

“Yes,” Roderick confirmed. “Viktor waited to make sure the camera caught his face, and then he smiled. No doubt, he knew we’d eventually see it, and
you
would see it, as well.”

“What do you think this means?” I asked quietly, drawing close to him as another patron, an elderly man, approached the beer and ale refrigerator. We wouldn’t have much longer to talk here.

“In and of itself? Hard to say.” Roderick glanced casually away from the man, stopping to stare at the customer in the fedora, wearing sunglasses and his
Deep Throat
style trench coat. Roderick waited for the man to move past us before continuing. “I can’t give you all the details, but one of the diaries in the Vatican’s possession once belonged to Giuseppe de la Serna, a Franciscan missionary who visited Bolivia in 1573. Do you know of him?”