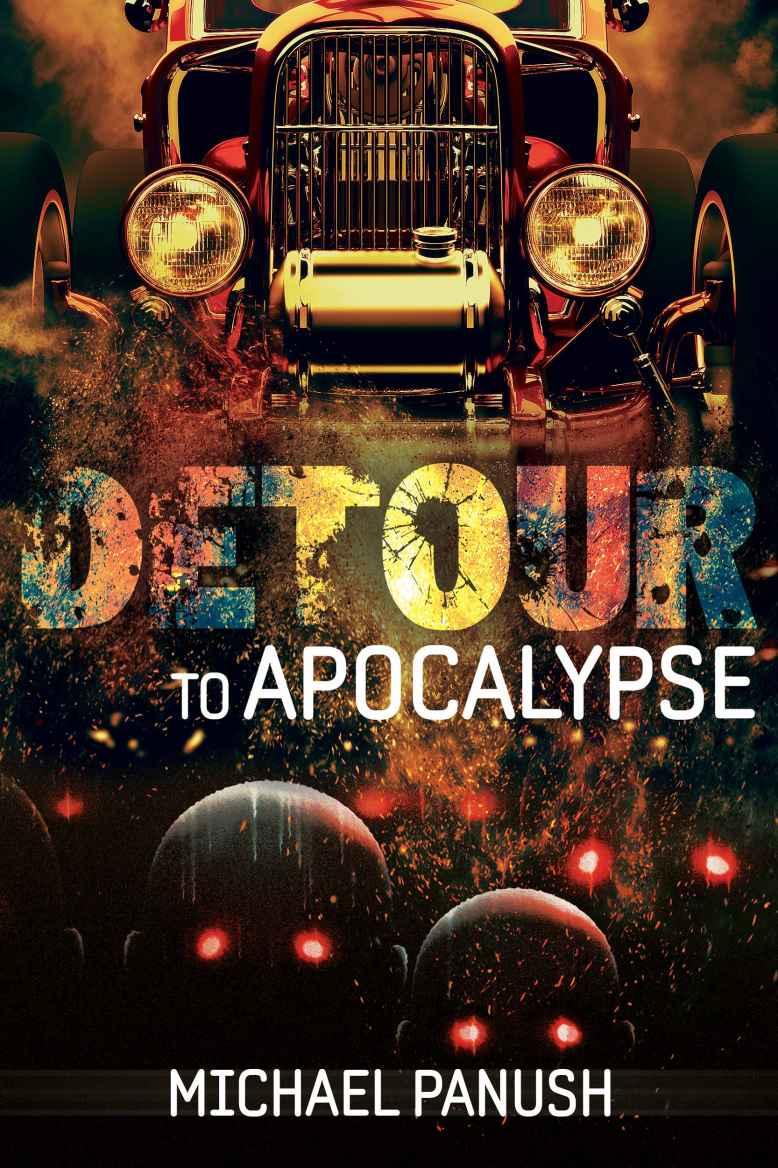 hey reached Las Vegas that afternoon, crossing Nevada in a five-car convoy. Roscoe led, riding in his Nash-Healey with the desert wind rustling his dark hair and his sunglasses hiding his eyes from the glare―first from sunlight, and then from neon. Angel came nest in his Cadillac, followed by Betty in her little two-seater coupe. The Captain, driving his Rolls Royce with Felix in the passenger seat and Snowball scurrying around the back. Finally, Wooster brought up the rear in his Packard, which carried most of their supplies. It had been a pretty boring trip, full of open desert and splotches of habitation that passed for towns. Roscoe kept fiddling with the dial to keep the Deadbeat’s program on, pleased the signal carried all the way out here. But when they reached Las Vegas, with the oversized sign of the waving cowboy with his perpetual wink and a cigarette jutting in the corner of his mouth, everything got real exciting.

The drivers rolled down the Vegas Strip, driving by casino after casino. Even though it was still afternoon, the lights had already switched on. They blared from the towering, bulky casinos, and bathed the dark pavement and the cluttered cars in a thousand bright shades of color. The sidewalks, packed with gamblers and tourists, seemed to glow as well―but that might have been from the sequined costumes of showgirls advertising the casinos, or the Hawaiian shirts of the tourists who came from all over the country to gamble and dabble in a little bit of wickedness. Roscoe had been through Vegas a few times―never long enough to lose more than a couple bucks ―and it took his breath away whenever he visited. The city was a monument to the wealth America had acquired at the end of the war, and its collective desire to spend it all in a wild storm of bright, mad sin.

Right there, in the center of the Strip, stood the Sandpiper Hotel and Casino―the palace of Frankie Fink’s criminal empire. It had a vaguely desert theme, with Moorish columns by the square doors and showgirls dressed like belly dancers. That was about as far as the theme went. The structure itself looked like a large tan rectangle full of windows, and covered in gilding. The sign, in cool blue neon, shone down from above the entrance. Roscoe gazed at it. Getting in seemed easy enough, but he was sure it would be a bit more difficult to get out.

This time, Roscoe didn’t stop at a casino. Instead, he led the convoy past the Strip and into the city of Las Vegas proper. The Captain had scoped the place out beforehand and already picked where they’d be staying: The Oasis Motel. It lay in a quiet side street, with the Strip glowing like a setting sun on the horizon. It seemed a good place to lay low. Roscoe spotted the sign for the Oasis, blazing red under a light-up palm tree, and drove into the square parking lot. The hotel formed a horseshoe around the lot, offering a pool of fetid water in the back and bristly fake grass on the balconies. Roscoe and his friends parked and climbed out of their vehicles, stretching and groaning after a long time on the road.

A rotund fellow in a turquoise bowling shirt, wandered over to greet them. He scratched his thinning hair when he saw the five gleaming automobiles. The Captain emerged, Felix at his side. Snowball hopped out as well.

The portly fellow, who had to be the dump’s owner, eyeballed the baby Yeti and wiggled a finger inside an ear. “Um…We don’t really allow pets. I’m sorry.”

The Captain reached into his coat and withdrew an envelope, which he handed to the owner. “I apologize. But I think you’ll find this ample compensation.” The owner took it, and his eyes bulged when he looked inside. “We’ll take five rooms, side by side, on the ground floor. We don’t want to be disturbed. If anyone comes by asking for us, you telephone my room and let me know.” As he spoke, Wooster opened the trunk and hauled out two army green duffel bags, packed with supplies. “We’ll do our best to be courteous and quiet during the time that we’re here.”

“An ape, actually, sir,” Felix . “He is very well-behaved.” Snowball urinated on the bristling fake grass as Betty and Angel helped carry in the suitcases. “And I will make sure that he does not bother your other guests.”

The owner nodded. “Well, that’s just fine.” He paused and looked at the drivers. Roscoe walked over to stand next to the Captain and Felix. “So…What’re y’all here for? See the casinos, maybe?”

“I’ll fetch you the keys. Your rooms are right there on the first floor.” The owner tucked the envelope under his arm. “Let me know if you need anything. Name’s Otis, by the way. You just ask for anything and I’ll get it.” He hurried across the parking lot, seemingly eager to be out of the way.

The Captain watched him go. Wooster, Angel, and Betty came to stand with him.

“Seems like a charming little place,” Betty said. “Ice boxes are freshly stocked, at least.” She turned to the Captain and Roscoe. “But I don’t think we’re here to see the sights. What’s our plan, Captain? How do we find Townsend Mars and Dr. Bolton?”

Wooster spat chewing tobacco onto the asphalt. The puddle spread, drying quickly in the warm sun. “Want my advice? We hit him hard, right now. We got the equipment. We got the artillery. It’ll be simple.”

“I’d rather not, Wooster. I don’t want to draw attention to ourselves―and I’m sure our government employers wouldn’t want an armed incursion in a crowded casino.” The Captain stroked his gray moustache as he stared at the dust. “We need to accomplish this carefully, and I don’t want any civilians involved.”

Roscoe leaned on the side of his car. “So we ask―we ask Fink to hand over Dr. Bolton. He’s a businessman and he doesn’t want any trouble. We explain to him the truth of what his friendship with Mars means, and he’ll do the rest.”

“That’s a good idea,” the Captain said. “We can seek an audience with Finkelstein. Discuss matters. Perhaps we can convince him to give Bolton up without a fight.”

“He’s a hood. He might need plenty of convincing.” Angel pulled a switchblade from his zoot suit’s pocket and flicked it open. “You want me and Roscoe to persuade him, boss?”

“May I go?” Felix asked. “If you wish to show good intentions, perhaps I could come along? I could explain the situation to Mr. Finkelstein about why he needs to turn Dr. Bolton over to our custody. Perhaps that would be helpful?”

“Bringing a nice kid like Felix would show that we’re not on the warpath,” Betty added.

“Leave the Yeti here.” Roscoe squinted at the cloudless sky. “I’m going too.”

“Very well.” The Captain nodded. “Roscoe, Betty―I’d like you with me. We’ll take the Rolls.” He glanced down at Felix. “Son, you may accompany us, but I want you on your best behavior. I don’t have to tell you the importance of this meeting.” He glanced at Wooster and Angel. “I’ll need you men to stay here and create a secure base of operations. Scan the surrounding area, prepare our equipment and weapons, and wait for us to return. Hopefully, it won’t take long.” He walked back to the Rolls, straightening his tie and vest as if preparing for a business meeting. Felix and Betty followed him.

Angel grinned at Roscoe. “The old man likes your idea. I think he sees you handling yourself well, and he likes that too.”

“What does that mean?” Roscoe asked.

Wooster chuckled. “Means he might want to make you trail boss, Roscoe.”

“A leader?” Roscoe shook his head. “No way. I’m some punk hitman. I’m a torpedo who knows a thing or two about cars. I’m no―”