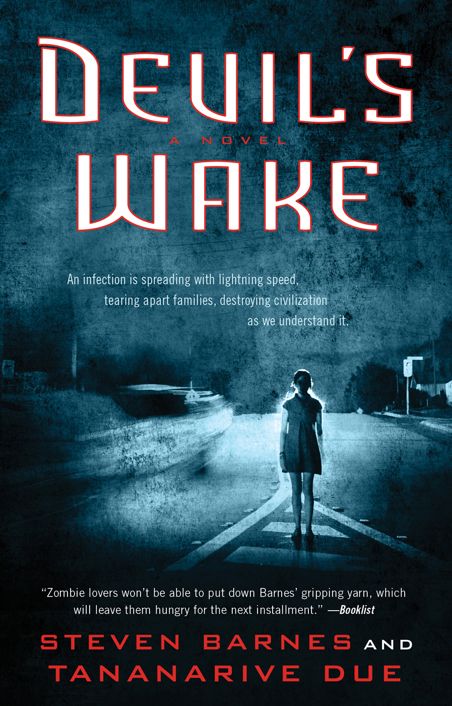 Thank you for purchasing this Atria Paperback eBook.

Sign up for our newsletter and receive special offers, access to bonus content, and info on the latest new releases and other great eBooks from Atria Paperback and Simon & Schuster.

Part I: Before: First Warning

Part II: The Days of Monsters

About Steven Barnes and Tananarive Due

“Well, if there’s that many, they’ll probably get us wherever we are.”

—Night of the Living Dead

Before: First Warning
ONE

—ongoing
concerns over scattered reports of violent, perhaps drug-induced behavior in the Seattle area,”
the newscaster’s voice boomed from the BMW’s Sony speakers, filling the car as trees and farmland zipped past on either side.
“While
yesterday’s bizarre rampages at a boarding school in New Brunswick, New Jersey, and a diet clinic in West Palm Beach, Florida, did involve some individuals who have received the Amsterdam flu inoculation, the CDC says there is no relationship, as the vaccine has been thoroughly tested. But as a cautionary measure, further vaccinations have been halted until the nature of this—”

“Kendra, don’t exaggerate,” her mother said, weary of the argument. Cassandra Brookings had the cheekbones and carriage that said “run
way” even if she’d opted for owlish glasses and a family therapist’s credentials. “These are just rumors. There are always rumors about the unknown. Millions of people have taken the flu shot, and there have been reports of, what? A handful of cases that probably aren’t connected at all? These people were probably deeply disturbed from the beginning. Do you have a mental disorder we don’t know about?”

Parents are a mental disorder—does that count?
Kendra thought. Grandpa Joe, her mother’s father, had always said Mom had a naive streak a mile long. Kendra figured her mom had moved to Washington State to be closer to her father’s cabin up near Centralia, but Mom would never admit it. Stubbornness ran in the family, and forcing Kendra to get a flu shot on her sixteenth birthday was a perfect example.

“I know you’re nervous, sweet pea.” Devon Brookings was a big man in his mid-forties, a college athlete who now enjoyed couches more than wind sprints. He and Cassandra ran a family therapy/life coach business that did very well, thank you, but he was totally chair-bound: his waistline was still solid, but expanding nicely.

Dad switched radio stations, trying to cheer her up. A staccato hip-hop rhythm boomed through the speakers. “Don’t be. Doc Thorpe has overseen thousands of vaccinations, and never had a problem. Not once. A few folks faint when they see the needle, but…” He winked into the rearview mirror. Smiling. This was Dad’s idea of a joke.

“Don’t look so sour. It’s not a big deal. We’re lucky to get this shot. I didn’t want to scare you, but there’s a study…”

“Yeah, yeah, I heard about that,” Kendra said. “In school, Mr. Kaplan had told us that 125,000 people might have died from the new flu in Asia and Europe. But it’s not happening here. Pizza, burgers, and fries might be saving our butts.” Kendra herself looked too much like a typical Disney Channel Sassy Black Teenager for her own com
fort: short, cute, chipmunk cheeks, perfect teeth, and eyes as bright as stars.

“I think Burger King is responsible for those rumors,” Mom said. “I wouldn’t trust Mayor McCheese if I were you.”

“That’s McDonald’s,” Kendra said. Her mother was practically a vegan, and Dad’s cooking skills topped out at pan-fried SPAM, so mealtime was an adventure.

Kendra gave up on her pleas, settling for the view as the car crossed the Interstate Bridge into Portland over the Columbia River. Portland wasn’t L.A. even in its dreams, but it was cute, like a huge small town. Dad switched off the radio so they could hear the quiet. One thing the Pacific Northwest had over L.A. was raw beauty. All Kendra remembered of grasslands and mountains in L.A. was shades of thirsty brown.

“It still rains too much,” Kendra said to her window.

“Got that right,” Dad said. “The state flower is mildew.”

“But it makes everything look so
alive,
” Mom said. “Remember spring?”

The last thing we talked about on the way to Portland was how pretty it is in springtime,
Kendra would write in her journal later.
Spring was just another season in the world’s long list of wonders I was foolish enough to take for granted.

IF YOU HAVE FLU SYMPTOMS, PLEASE PROTECT OTHER PATIENTS BY WEARING A MASK
. The sign was waiting inside the hospital’s electric double doors, beside a cardboard dispenser half full of blue paper face masks. Mom quickly whipped out three masks like they were tissues and passed them around.

“But we’re not sick,” Kendra said.

“Haven’t you heard that hospitals are the perfect place to get sick?”
Dad said. As if Portland General had been
her
idea. “If you ever hear the word ‘iatrogenic,’ you know you’ve been screwed.” Kendra hadn’t been to an emergency room since she was four, and she didn’t watch hospital shows, so she had no real knowledge as to how crowded and depressing ERs could be. It was a den of the unfortunate, people who were coughing, dazed, or bleeding. There were at least twenty people waiting, enough to fill all but four molded plastic seats.

While Dad checked them in at the front desk, Mom and Kendra found two chairs together in a corner of the waiting room, leaving Dad to fend for himself. To Kendra’s right, an old man was nodding to sleep, a glistening snail trail dribbling from one corner of his mouth; on her left, a five-year-old boy with a homemade bandage around his head whined softly to his mother. As soon as Kendra sat down, the kid coughed up a mouthful of vomit. Some of the buttermilky glop splattered the tip of Kendra’s sneaker. She stared at the orangish flecks, horrified.

“Are you
kidding
me?” Kendra whispered to her mom after the kid’s mother apologized, rushing her son off to the bathroom.

Yeah, big kids too,
Kendra thought, her throat pinching tight. Except for the dozing old man, everyone nearby stood up to move away from the stench, giving up their seats. Despite the smell, by the time the cleaning crew arrived, newcomers had swarmed the empty seats. Kendra swore she would never visit a hospital again.

When Dad joined them, he motioned them in close for a huddle, checking to make sure no one was listening. “Twenty minutes max—maybe thirty. Then we’re in.” He sounded like they were planning a bank heist. Kendra felt sorry for the patients who really needed doctors.

Kendra hadn’t noticed the mounted television set playing overhead until someone turned up the volume, and suddenly all eyes were on the screen.
Los Angeles—LIVE,
it said. On TV, a street full
of shoppers and Armani-clad executive types were screaming and running.

On TV, a man swung a full-size naked mannequin like a baseball bat, slamming it into the face of a silver-haired lady clad only in a nightgown, who’d been running barefoot on his heels. The old lady flew backward like a roller skater hitting a clothesline, her legs splayed in a Y. The entire ER gasped in unison.

“We got out just in time!” Dad said. “See? Rat City. When urban areas get overcrowded—”

“That ain’t it!” A voice spoke up. The old man, at last, was awake. He smeared drool from his chin and pushed himself to his feet, leaning on the chair. “My brother’s down in a little flea of a town outside El Dorado, Arkansas. Said the same thing happened there yesterday—a nurse went batshit, biting people. Next day, folks who got bit lost their minds, trying to bite too. Says they locked ’em all up in the jail and kept it quiet. But you don’t think the government knows?”

If not for what was on TV, the old man would have sounded like a nut job.

On TV, Kendra watched a woman in a nightshirt sink her teeth into the bare forearm of a beefy jogger as he sprinted past her. She held on, teeth clenched tight, even as he yelled and tried to fling her away. The woman hung on like a pit bull, her bright red hair flying back and forth as the jogger struggled to shake her off.

Then it looked like the video camera fell over—or the man carrying it did. With one voice, the ER gasped again. All those who could rose to their feet. The TV screen went black, then returned to the
newsroom. The blond Anchor Barbie looked shaken, her lips working without producing words.

Mom was shaking her head. “Mass hysteria? Look at them, Dev. What kind of delusion is this?”

The next scream wasn’t from the TV. A piercing sound, midway between human and some kind of jungle cat, came from beyond the waiting room, beyond the nurses’ station—past the double doors marked EMERGENCY PERSONNEL ONLY. Someone on the other side of the doors was in a lot of pain. Dying, perhaps. A slow, hard death.

“The damned circuits are busy,” Dad said, the only voice in the room. He was so preoccupied that he probably thought the scream was on TV.

All eyes turned from the TV to the double doors at the emergency room entrance. The three nurses at the station put away their charts and phones, staring with the rest of them.
What are we waiting for?
Kendra wondered, holding tightly to her mother’s arm. When the main lobby doors slid open, the rest of them found a reason to scream.