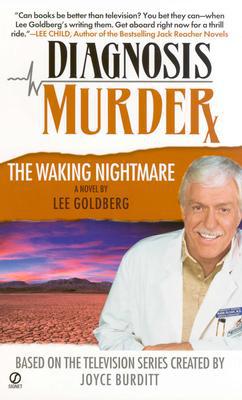 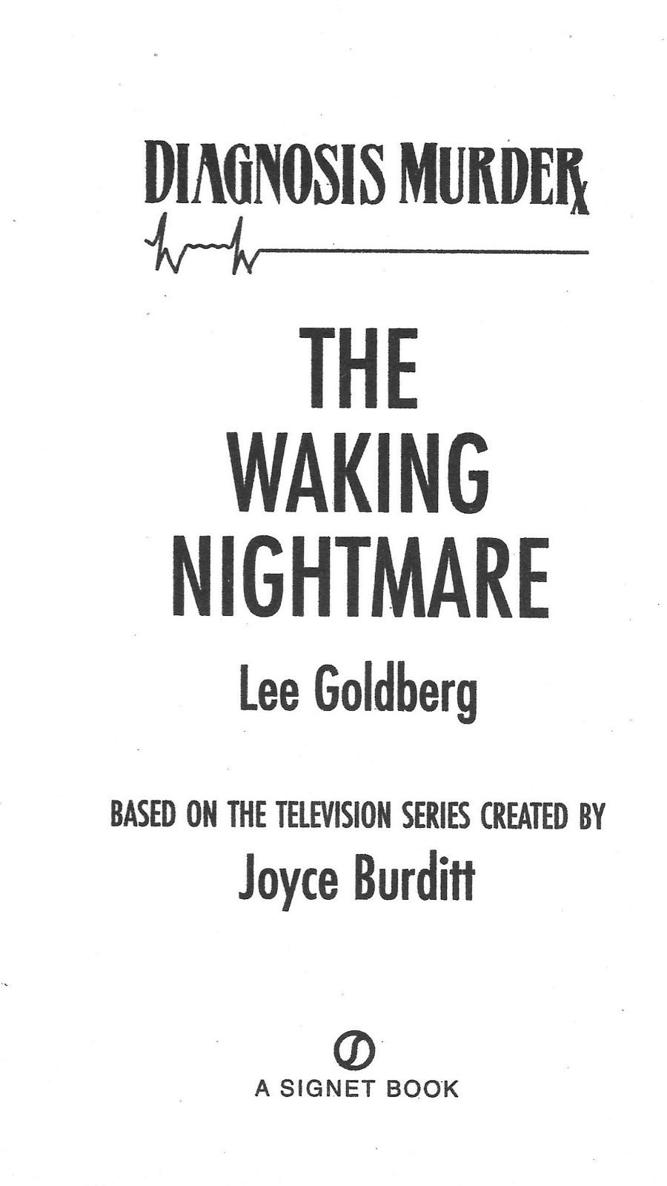 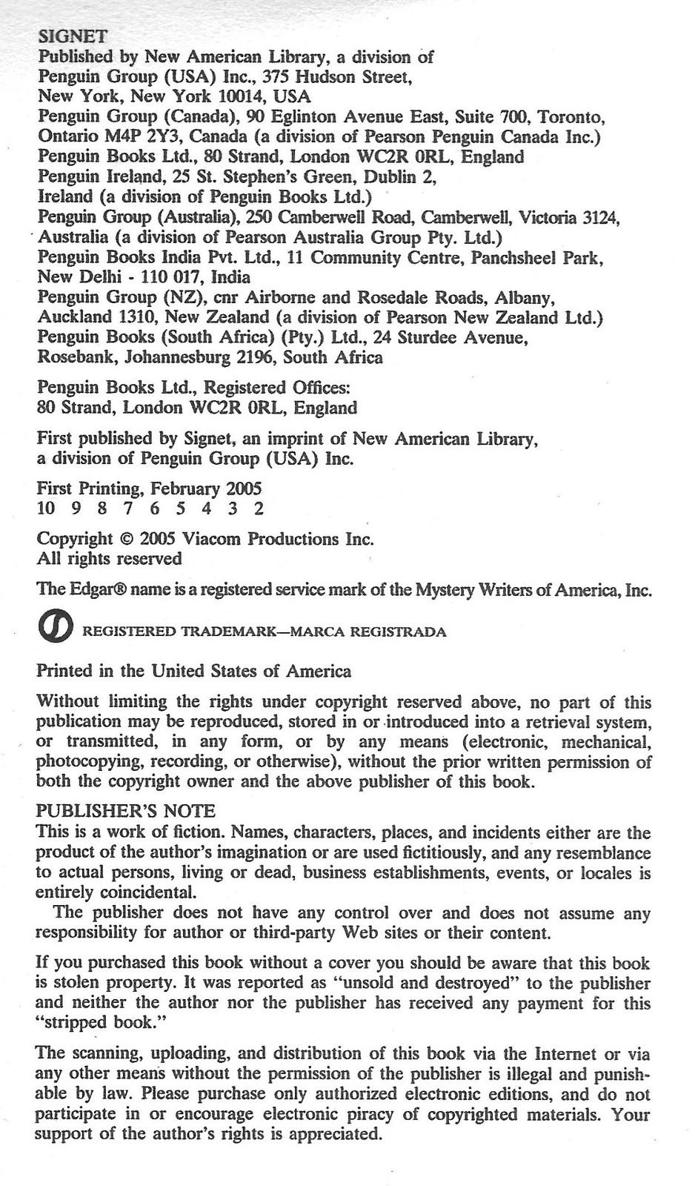 Ute von Hartz and everyone at D.M.A.S.

As always, I am deeply indebted to Dr. D. P. Lyle for his medical advice and hearty laughter. I'd also like to thank William Rabkin, Tod Goldberg, Paul Bishop, Twist Phelan, Bill Dinino, and Joel Goldman for their wise counsel.

In the midst of writing this book, I had an accident and broke both of my arms, one of them quite severely. It was a situation that required far more than the usual patience, understanding, and support that my wife Valerie and my daughter Madison bless me with every day. During those weeks, writing was a daily struggle... actually, everything was... and I couldn't have done it without their love.

I'm also grateful to the hundreds of
Diagnosis Murder
fans who inundated me with encouraging get well cards, e-mails, and letters. This book is for you.

The woman sitting in front of Dr. Mark Sloan was determined to die and there was nothing he could do about it. He'd brought her into this world over forty years ago and, more than likely, he'd see her out of it, too.

Although Mark was Chief of Internal Medicine at Community General Hospital, he still acted as Lenore Barber's family physician. Despite all his dire warnings, she'd taken up smoking as a teenager and never gave it up. Seven years ago, she was diagnosed with lung cancer. She smoked on the morning of her lung surgery and during the five months of chemotherapy that followed.

It made Mark furious, but he understood her flawed, fatalistic thinking. She was dead already. What difference would it make if she kept smoking now if it gave her some comfort through the ordeal?

But luck was on her side. After six chemotherapy sessions, and the weeks of crushing fatigue, complete hair loss, and constant nausea that followed, all signs of the cancer were eradicated.

He was certain the harrowing, near-death experience would have a profound effect on Lenore's life. The mere thought of another cigarette would surely repulse her. But if it didn't, all she had to do was look at herself naked to be dissuaded from having a smoke.

Lenore spent a small fortune on breast implants, a nose job, and elaborate orthodonture to make herself more competitively attractive to casting directors, eligible bachelors, and people she was trying to sell real estate to. The surgical scars on her body would be a constant, undeniable reminder of the fate she'd narrowly escaped. Mark believed that would be enough to guarantee that she'd never smoke again.

She shrugged off the experience as if it was just a bad bout with the flu and fell right back into her old life as an aspiring actress, real estate agent, single mother, and heavy smoker. If anything, she smoked even more than she had before, as if losing a chunk of her lung and being bombarded with radiation had given her some kind of immunity from disease.

Over the ensuing years, Mark reminded her of the hell she'd been through. Did she want to endure it all over again? He urged her to try the nicotine patch, to enroll in smoking cessation classes, to do whatever it took to kick her deadly addiction to cigarettes. But she blithely ignored his admonitions.

A few months ago, she came in to see Mark for a routine follow-up exam, which revealed a tiny growth on her liver. Mark ordered a biopsy and the results confirmed his worst fears. The cancer was back, only now it had migrated to her liver. Lenore immediately began a new, aggressive regimen of chemotherapy.

Now she sat in an exam room with Mark, who reviewed the latest PET scan results and blood work analysis from the hospital's Chief of Oncology.

It was good news. The growth was gone and her hematology was all normal. No more treatment was necessary, no surgery would be required.

"Wow," she said, scratching under the wig she wore to cover her radiation-induced baldness. "Just like that? It's gone?"

"I don't believe it," she said. "I thought you were going to tell me it was time to start looking for a good surgeon."

"You were very lucky. I can't recall seeing results this positive after only three chemotherapy treatments," Mark said. "But if you keep smoking, I can guarantee you that the cancer will return."

"Can't you give me even a minute to enjoy the good news before lecturing me?"

"I know you've kept smoking throughout the chemo," Mark said.

"And the cancer is gone, isn't it?" she said with a casual shrug. "Obviously, it didn't make a difference."

Mark looked her in the eye. "You can't keep smoking, Lenore."

"You just got your break," he said. "You're still alive."

"I didn't smoke at all yesterday and I didn't have a single cigarette the whole week I was in the Bahamas," she said, flashing a smile that showed her unnaturally bright teeth. "Maybe I should move there. Prescribe that."

"You shouldn't be smoking at all, anywhere," he said. "Think about your kids."

"I never smoke around them."

"You know what I meant," Mark said. "Who is going to raise them when you're gone?"

"Don't be so dramatic, Mark." Lenore got up from her seat and grabbed her purse. "So I had an itsy-bitsy smudge on the x-ray. If it comes back, we'll just zap it again. In the meantime, I'm going to celebrate. With a drink and a cigarette!"

And with that, Lenore kissed Mark on the cheek and quickly left the exam room, closing the door behind her.

Mark stared at the door for a long time, angry and frustrated. It wasn't like him to be so heavy-handed. He knew it was counterproductive. But he couldn't help himself. There were so many cancer patients who never got the second chance that Lenore had been given and she didn't seem to care.

Why couldn't she see how lucky she was?

Her self-destructive behavior infuriated him, more so because he felt a special responsibility to her. He was the one who delivered her, cut her umbilical cord, and laid her in her mother's arms. Mark couldn't help feeling that her good health had been in his hands ever since. It was the way he felt about any of the children he delivered who, as adults, still were his patients today.

Intellectually, Mark understood Lenore's addiction. She was unable to control her need for nicotine and would sacrifice anything to satisfy it. But emotionally, he just couldn't accept it. After what she'd suffered, how could she light another cigarette ever again? Didn't she want to live? Didn't she want to be there for her children?

It was a deplorable and unnecessary tragedy. But unless she acknowledged her addiction and was willing to do something about it, he was utterly powerless to save her.

His frustration with the situation was a cancer, too. Malignant and spreading with each encounter with her. He could feel it gnawing at his bones, eating him alive from inside.

Mark had felt that frustration with patients before and knew there was only one cure for his affliction: to distract himself with another insurmountable problem.

He thought of the murders he'd solved over the years as a consultant to the Los Angeles Police Department and wondered if one reason he did it was to compensate for all the times he couldn't help the living.

Why was it that the problems of the dead were so much easier to solve?

Mark got up and wandered down the hall to the doctors' lounge, where Dr. Jesse Travis was sitting at one of the chipped Formica tables catching up on his paperwork, a stack of bulging medical files teetering in front of him.

"You ever have one of those days you wish you weren't a doctor?" the young doctor asked, peeking around the corner of the pile at Mark, who was helping himself to a cup of coffee.

"As a matter of fact," Mark replied, "this happens to be one of them."

"Today I wouldn't mind a little less human drama and a lot more paperwork." Mark took a seat at the table beside him and stirred some sugar into his coffee cup.

"You want to talk about it?" Jesse asked, not really expecting Mark to unburden himself. After all, what knowledge or experience could the young doctor possibly have to offer his mentor, a man he tried to emulate as a doctor and even as a detective.

"Thanks," Mark said. "I could use your advice."

"You
could
?" Jesse asked in disbelief. Mark Sloan was actually turning to him for counsel. Like they were equals.

But Jesse's excitement quickly morphed into fear. What if he didn't have the answers? What if his advice was wrong? What would Mark think of him then?

Jesse didn't get the chance to find out.

Just as Mark was about to speak, he happened to take a casual glance out the window at the office building across the street. At first, Mark didn't quite register what he was seeing.

There was a woman sitting outside on the sill of her fifth-floor window, as calm and relaxed as if she were on the edge of a swimming pool, gently kicking her feet in the water.

She was pretty, in her mid-twenties, wearing a loose-fitting white blouse and a navy blue jacket that befitted a professional woman. She had pale skin and bright green eyes that met his gaze as she pushed herself into the air.

Mark bolted up from his seat, spilling his coffee onto the floor.

"No!" he yelled, horrified.

Her jacket flared behind her like wings as she plummeted silently to the ground below. She smacked into a tree limb, snapping it in half, then dropped onto the awning that stretched over the street-level coffeehouse. She bounced off the awning and landed on top of an old Buick Skylark parked at the curb. The roof crumpled and the car windows exploded under the impact, spraying glass onto the street.

Mark dashed for the stairs.

Jesse glanced out the window, saw the woman's body splayed on top of the car, and ran after Mark. They scrambled down the stairs together, taking them two at a time. There was no need to speak. They both knew what they had to do.

They burst out of the stairwell into the busy emergency room, the doors smacking into the walls with an explosive bang that caught everyone's attention.

Mark ran out the lobby doors into the street while Jesse started gathering supplies and yelling orders to the nurses.

"I need a crash cart, cervical collar, and a stretcher, stat!" he hollered.

Mark raced across the street, weaving through the traffic that had already stalled to gape at the bloodied body and the damaged car. Several people gathered on the street around the car, staring at the woman, uncertain of what to do. He pushed through them, jumped up onto the hood and leaned over the woman, who was on her back, her head lolling on the shattered windshield. Blood seeped out of her nose and mouth and dripped from under her hair. One of her legs was twisted grotesquely underneath her.

He felt for her pulse and found one. She was still alive. He lifted her eyelids and checked her pupils, which were reactive and equal, indicating that there was no bleeding in the brain. Mark took out his stethoscope and pressed it to her chest, listening. Her breathing wasn't good. Hitting the tree and the awning on her way down had broken her fall and saved her life, at least for the moment.