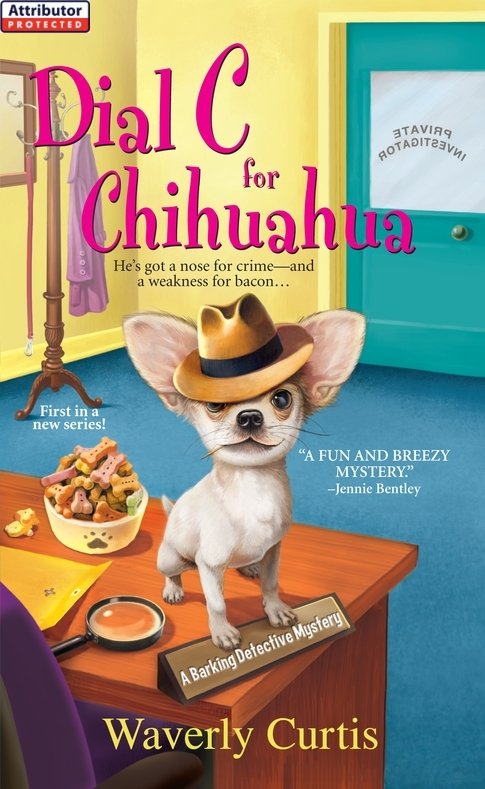 Howls of Praise For
Dial C for Chihuahua
And Pepe the Barking Detective
“Move over, Scooby-Doo, there's a new dog in town!
Dial C for Chihuahua
is a fun and breezy read, with polished writing and charming characters, both human and canine. If you like a little Chihuahua with your mystery, former purse-dog Pepe is a perfect fit!”
âJennie Bentley, author of the bestselling
Do-It-Yourself Home Renovation
mysteries and (as Jenna Bennett) the
Cutthroat Business
mysteries
Â
“Readers will sit up and beg for more.”
âSushi the Shih Tzu, canine star of the
Trash ân' Treasures
mysteries by Barbara Allan
Â
“Every dog has its day and there'll be plenty of days for Geri Sullivan and Pepe in this fun twist on the typical PI partnership.”
âSimon Wood, author of
Did Not Finish
Â
“Waverly Curtis has created a delightful cast of human and canine characters. Pepe never loses his essential dogginess, even as he amazes gutsy Geri Sullivan, his partner in crime detection, with his past exploits and keen nose for detail. I look forward to Pepe's next adventure!”
âBernadette Pajer, author of
A Spark of Death
and
Fatal Induction
, the first two
Professor Bradshaw
Mysteries
Dial C for Chihuahua
Waverly Curtis

Paradise Hacked (First Circle Club Book 2) by Siegel, Alex
The Water Diviner by Andrew Anastasios
MacRoscope by Piers Anthony
Just Intuition by Fisk, Makenzi
The Short Forever by Stuart Woods
A Little Too Far by Lisa Desrochers
Dangerous (Courting the Darkness Saga) by Fuller, Karen
Games of the Heart by Kristen Ashley
Rust and Bone by Craig Davidson
The Stories of Ray Bradbury by Ray Bradbury
Our partner