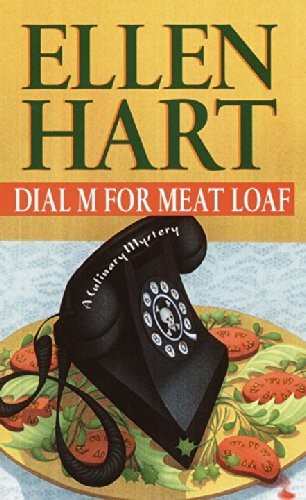 For Claire Lewis and John Schroeder,
two dedicated gourmets. Meat loaf
may
have passed their lips,
though it is not a topic they would ever discuss in polite society.
It is my fondest wish that they will be instructed,
entertained, and ennobled by this book.

Every saint has a past,
Every sinner a future.

There are no whole truths; all truths are half-truths. It is trying to treat them as whole truths that plays the devil.

Praise for Ellen Hart
and her Sophie Greenway
mysteries

“Mouth-watering . . . A smorgasbord of devilment.”

“The pace quickly bubbles from simmer to boil. . . . The complexity of Hart’s novel is admirable.”

THIS LITTLE PIGGY WENT TO MURDER

“Strong characters and a rich Lake Superior setting make this solidly constructed mystery hard to put down. Another winner for Ellen Hart!”

“Another splendid specimen of the classical mystery story, nicely updated and full of interesting and believable characters.”

Praise for Ellen Hart
and her Jane Lawless series

“Hart’s crisp, elegant writing and atmosphere [are] reminiscent of the British detective style, but she has a nicer sense of character, confrontation, and sparsely utilized violence . . . .
Hallowed Murder
is as valuable for its mainstream influences as for its sexual politics.”

“This compelling whodunit has the psychological maze of a Barbara Vine mystery and the feel of Agatha Christie. . . . Hart keeps even the most seasoned mystery buff baffled until the end.”

“Hart deftly turns the spotlight on the dusty secrets and shadowy souls of a prominent theater family. The resulting mystery is worthy of a standing ovation.”

“A real treat . . . Secret passageways, a coded ledger, a mysterious group known only as the Chamber, experimental drugs, blackmail, sexual assault, betrayal: all the ingredients of a good whodunit.”

“A smart and shocking thriller.”

“Packed with mystery and scheming characters,
Faint Praise
is one of the year’s best. It’s no wonder Ellen Hart is everyone’s favorite author.”

MILTON WASHBURN: Brother of John. Uncle of Bernice and Plato.

BERNICE WASHBURN: Food editor at the
Times Register
in Minneapolis. Daughter of Mary and John. Sister of Plato.

PLATO WASHBURN: Owner of the
Rose Hill Gazette
. Son of John and Mary. Brother of Bernice.

I’m the last person you expected to hear from, right?
What’s it been? Ten years? I figured the rest of my buddies on the outside would forget I existed, but not you.
We got history, pal. But then, I suppose if you tried to
find me, maybe you struck out.

I was transferred from Jeff City three years ago. I’m in
Leavenworth now. Can you believe it? Man, I remember
hearing about this place when we were kids. Never
thought I’d end up here. I’ve made some bad moves in
my life, J. D. Very bad. You probably haven’t heard, but
I knifed a guy at Jeff City. It was self-defense, but how
the hell was I supposed to prove it? I’ll never be any-body’s punk. That’s why I had to carry. After the guy
died, I was transferred here. There’s no chance of parole
now. Two murders on my ticket and the only way I’ll get
out of here is in a coffin. So, I guess I’ve had to do some
rethinking about my life. Truth is, I’ve come to some
pretty amazing conclusions.

The worst mistake I ever made—other than killing
two unarmed men—was getting you involved in my
crazy schemes. You were like a brother to me, man. I’m
afraid I sent you down the wrong road and I’m sorry. I
know I’ve never said it before, but I admit that what
happened to us back when we were nineteen was mostly
my fault. I’m glad you never got in trouble. You felt
guilty about the way it worked out and you shouldn’t
have. Hey, we’re both old men now. We got to live and
let live. I wouldn’t be writing except, well, I kind of
got saved. It happened just before I left Jeff City, and
I’m glad it did. See, I spent a lot of time talking to this
one guy, another lifer, and he helped me see some stuff
differently.

Don’t laugh. I figure I’m going to meet my maker soon
and I better get right with Him before I die. I’m truly
sorry for the crap I’ve pulled, especially how I hurt you.
That’s why I’m sending you back some of the letters you
wrote me over the years. I kept most of them, but some
got lost. I wondered a lot about the kind of life you were
leading on the outside. Now I’m not wondering anymore. I’m scared for you, J. D. I’ve done some bad
things, but so have you. I never wanted to believe ill of
you, man, but—all I can say is, read the letters and then
get down on your knees and plead with the Good Lord
to forgive you! You got to do it! You’ve been as twisted
and sick as me. But the trick is, you got to be really sorry.
Are you sorry, J. D.? God help you if you’re not.

“How could you do something so . . . so hideous!” declared Cora Runbeck as she stood in her kitchen, gazing at the walls. She was utterly amazed. No, not just amazed more like dumbfounded. Tugging angrily at her apron, she whirled around and nailed her husband with her eyes. “It’s egg yolk, Kirby! How could you paint our kitchen walls egg yolk?”

Kirby, who had just come in with the afternoon mail, muttered something inaudible as he sat down at the kitchen table.

“For Pete’s sake, speak up. You know I can’t stand it when you mumble.”

“I said the color’s called Golden Sunrise. I like it. And you did, too. Before the damn cataract surgery,” he added as he swiped a hand across his mouth.

Cora adjusted her hearing aid, then peered down at him with her hands on her hips. “Land sakes, Kirby Runbeck. When I get my left eye done, what other horrors am I going to discover around this place?”

“A body in the freezer,” he said, snickering. He opened the water bill.

“Don’t use that kind of language around me. This isn’t
NYPD Blue
.”

He rolled his eyes. “Do I get some lunch, or what? Maybe I should take my truck and go visit Mabel Bjornstaad. She’s always more than happy to see me.”

“You just do that, you old goat. Maybe you’ll have a surprise waiting for you when you get home.”

Cora was a no-nonsense kind of woman. Norwegian to the core. She’d grown up on a farm near Le Suer. By the time she was ten, she’d been baking the family bread, feeding chickens, milking cows, washing clothes, taking care of her three younger siblings, and nursing an ailing mother. That was the late thirties and times were tough. She understood work and she understood responsibility.

Kirby, on the other hand, was a lazy man. Always had been. And he was cheap. He probably got the paint on sale. Or free from one of his buddies. Now that her eye was getting better, she would have to examine the entire house. It had been a good two years since she’d been able to see well. If there were other problems, she felt it was partially her fault. Being a Lutheran, Cora understood guilt. She should have had the eye surgery years ago. She was deeply embarrassed by the thought of what her friends must think when they sat and drank coffee in a kitchen with egg-yolk colored walls. She assumed they’d been painted a nice off-white. Tasteful. Understated. Cora admitted to a certain pride about her home.

As she busied herself making a pot of coffee, she heard Kirby mutter again. When she turned around, she saw that he was standing now, his hands squeezing the back of the chair. “What did you say?”

He cleared his throat. “I said, I want a divorce.”

She blinked. And then blinked again. “A what?”

“You heard me. I need passion in my life, Cora.”

She turned her hearing aid up to high. “For God’s sake, man, you’re seventy-five years old.”

For the first time in years, she was speechless.

“I don’t love you anymore. You can keep the house and the Chevy. I’ll give you enough money to make sure you’re comfortable. I just want my clothes and my truck. Oh, and my tools. You got no use for those.”

“Kirby, what are you saying? You don’t love me?”

“I’m not changing my mind.”

For the second time this morning, she was dumb-struck.

The coffeemaker began to gurgle and groan, adding a kind of vulgar background music to the marital trauma. Kirby glared at it. “I’m goin’ down to the Prairie Lights Cafe to buy me a meat loaf sandwich. When I get back, I’m gonna pack my stuff. I don’t want no scenes, Cora. Before I get old, I want to enjoy life a little. Kick up my heels.”

He held up a hand to silence her. Without another word, he turned and pushed through the screen door. His truck was parked under the carport next to the garage.

Cora closed her mouth. She turned to stare blankly at the flour canister on the kitchen counter. Her hearing aid was nothing but static this morning, so she turned it off. Divorce? The word flopped around inside her head like a wet sock in a dryer. Nobody in her family had ever been divorced before. The embarrassment would kill her. She’d never be able to show her face in Rose Hill again. She even suspected she might miss Kirby. After all these years, they were just a habit, but a habit was hard to break. And she did love him, in her own way, didn’t she?

Suddenly, Cora heard a thunderous roar. The floor rumbled so ominously beneath her pink terrycloth slippers that she had to grab hold of the counter to keep from falling backward. When the rumbling finally stopped, she rushed out to the back porch. There, where the carport used to be, was a huge smoking hole. The truck was gone. So was the garage. And so was Kirby.

Kirby Runbeck, age 75, died yesterday at his home on the outskirts of Rose Hill, the result of a mysterious bombing.

According to the local sheriff’s department, Mr. Runbeck had just left his house to drive into town when his wife heard a loud explosion. Authorities are still piecing together the facts, but preliminary evidence suggests that the ignition on Mr. Runbeck’s Ford truck had been wired with an explosive. When questioned later, the police had no comment about a motive for the murder.

In a statement given by Runbeck’s wife, Cora Runbeck said that her husband had been acting strangely yesterday morning. Pressed to give more details, all Mrs. Runbeck would say was, “Kirby once told me he loved his Ford Bronco so much he wanted to be buried in it. I guess he got his wish.”

Late yesterday evening, John Washburn, age 67, a resident of Rose Hill for the past forty-five years and mayor of the town for four years, suffered a massive stroke while having dinner at his home. Mr. Washburn ran for mayor of Rose Hill after retiring from his position as district manager of Midwest Optical. Before being promoted to that position, Mr. Washburn was a salesman for the company. His wife, Mary, brother Milton, and his two children, Plato and Bernice, are by his side at St. Matthew’s Medical Center. No further word is available at this time on his condition.