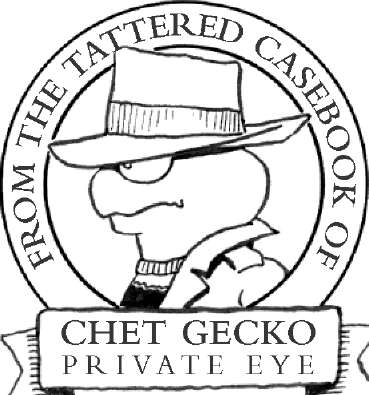 Harcourt is an imprint of
Houghton Mifflin Harcourt Publishing Company. 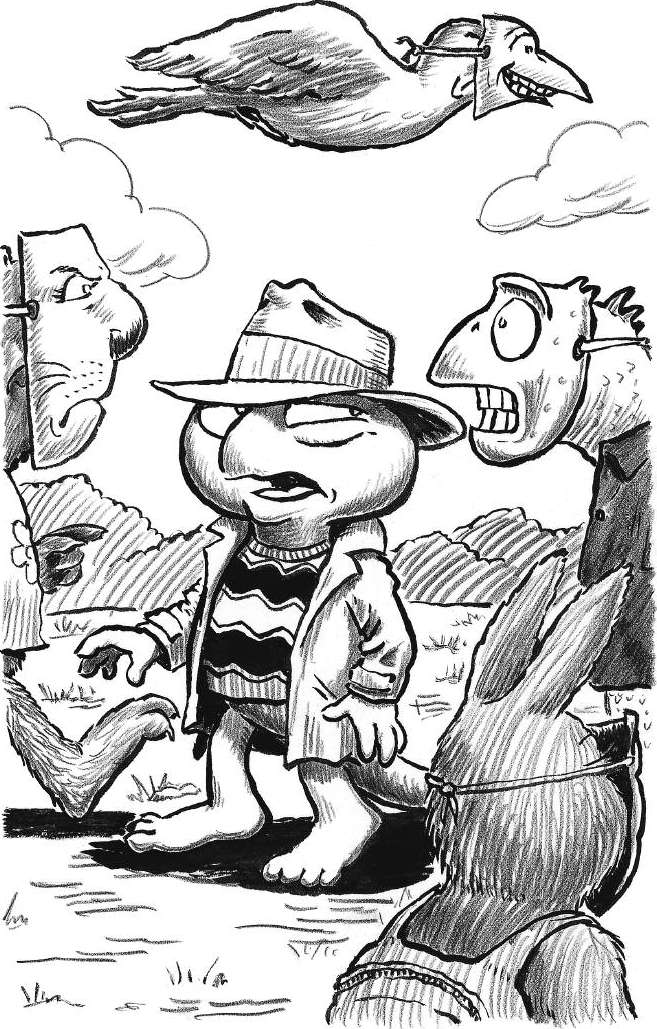 A private message from the private eye...

I wonder about things. Like, if corn oil comes from corn, where does baby oil come from? If people from Poland are called
Poles,
why aren't people from Holland called
Holes?
And why is it that writers write, but fingers don't
fing?

That's what detectives do. We wonder. (Others wonder how I manage to stay in school, but that's a subject for another time.) I'm Chet Gecko, finest lizard detective at Emerson Hicky Elementary and two-time former yo-yo champion.

Mr. Ratnose wishes I was even half as curious about schoolwork as I am about my cases. But you can't have everything. (And if you could, where would you put it?)

Lately, I've been wondering more than usual. Especially about this: How well do you really know the folks you know?

My investigations often show me the seamy underbelly of school life, but this case threw me for a loop. Folks I thought were the salt of the earth turned out to be the scum of the pond. And low-down punks turned out to be nice guys.

It's enough to make a gecko give up detecting and start knitting doilies. (Just kidding. I can't knit.)

But it took everything I had to tough out this case. Through fear and fire and thefts, I kept digging for the truth like a mole tunneling to Mumbai.

And why? Loyalty, pure and simple.

Someone was trying to put my mongoose janitor pal Maureen DeBree on ice. And a true-blue PI doesn't take that kind of monkey business lying down. (Standing up, maybe.)

Against all odds, I followed the tangled trail of clues to a conclusion that was nuttier than a squirrel's sundae and riskier than a playdate in a piranha's swimming pool.

But in the course of my investigation, one thing rang true: When you want your floors waxed, dial
M
for mongoose. But when you want danger, deception, and mysteries unraveled, dial
G
for Gecko.

You can't avoid it. No matter what, at some point in every school day, during that long, long stretch between lunch and freedom, time stands still. The great wheel grinds to a halt, the universe holds its breath, and the birds forget to sing.

That drones on and on and on, explaining the layers of the earth's crust, the eight parts of a plant, the ten types of clouds, the workings of friction, the wonders of the water cycle, the principle of gravity, and the true, exact meaning of the phrase, "bored out of your ever-lovin' skull."

This stretch of frozen time is also known as "science lesson."

Halfway through this one particular science lesson, I glanced at the clock. Sure enough, the minute hand hadn't budged for at least an Ice Age.

Would this day never end?

Then, from the nonstop
blah-blah-blah
at the front of the room, two words penetrated. The sound of my name.

"Chet Gecko?" said Mr. Ratnose. "That's the twelfth time you've checked the clock in the last minute. Is there somewhere else you'd rather be?"

Such an easy straight line.

I muttered, "Um, at the dentist, running from rhinos, shopping for underwear ... Did you want the full list?"

Mr. Ratnose scowled. His response felt like an old line from an even older movie. "Go to the attitude adjustment corner," he said wearily. "Maybe that will teach you some manners."

"Maybe," muttered my friend Bo Newt, "but I doubt it."

I sighed. "Uh, I said I'm on it." Past the desks of stupefied students I shuffled, back to the dusty corner and its pink plastic chair.

"You'd better be, mister," said Mr. Ratnose. "Parents Night is Friday, and I'm telling
your
parents everything." But even his warning had a kind of been-there, done-that feel to it.

I slumped into the chair, facing a poster of Rodney Rodent in a rocket that read
YOUR ATTITUDE DETERMINES YOUR ALTITUDE.

If Rodney was right, I was on the fast track to Lower Nowheresville. I hadn't had a new case in weeks, my wallet was flatter than a tapeworm's tummyâheck, I even had time to do all my homework. (Not that I actually
did
it.)

If this kept up, I'd turn from Chet Gecko, Private Eye, to Chet Gecko, Regular Guy. I was hungry for something, anything, to break the boredom.

But I wasn't ready for the Big Stink.

I sat quietly, practicing my thumb twiddlingâforward twiddle, reverse twiddle, fast, medium, and slowâwhen the whiff of a funky stench tickled my nose. Craning my neck, I searched for a culprit in the back row.

No shifting in seats. No telltale fake innocence. All my classmates looked like bored little angels.

The stench grew stronger. I fanned the air in front of my face. "Whew."

A giggle erupted from somewhere close at hand.

"He who smelt it, dealt it," whispered Rick Shaw, a nerdy hedgehog.

The giggling grew louder. Now several of the back-row kids had turned around to stare and point. 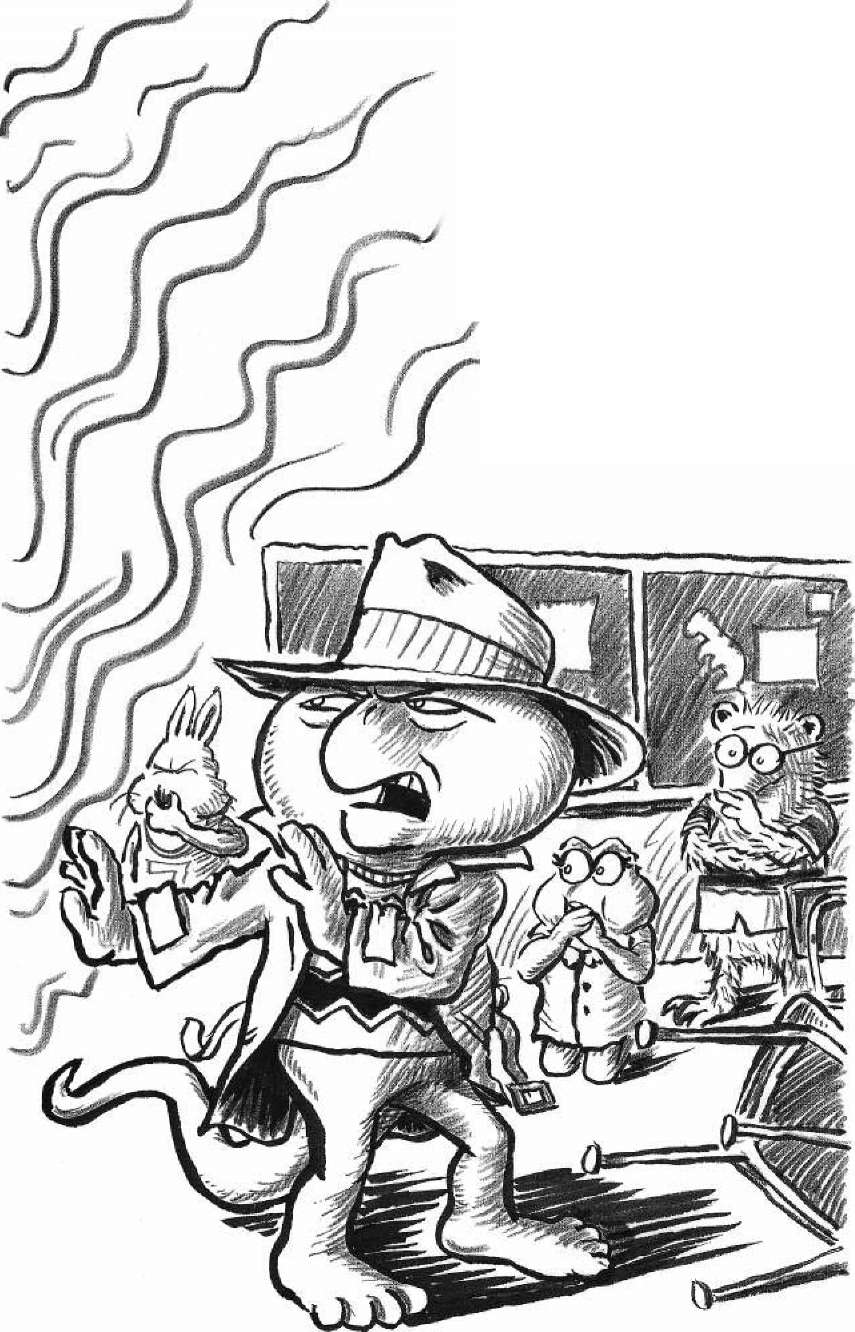 Then the funky stench cranked up another couple of notches, from cheese-cutting to paint-peeling. It seemed like it was coming from the direction of the wall. Poor wall.

Mr. Ratnose's lecture droned on. But by this time, the odor had tiptoed on its little stink-footed feet throughout the class. More and more kids were turning and searching for its source. 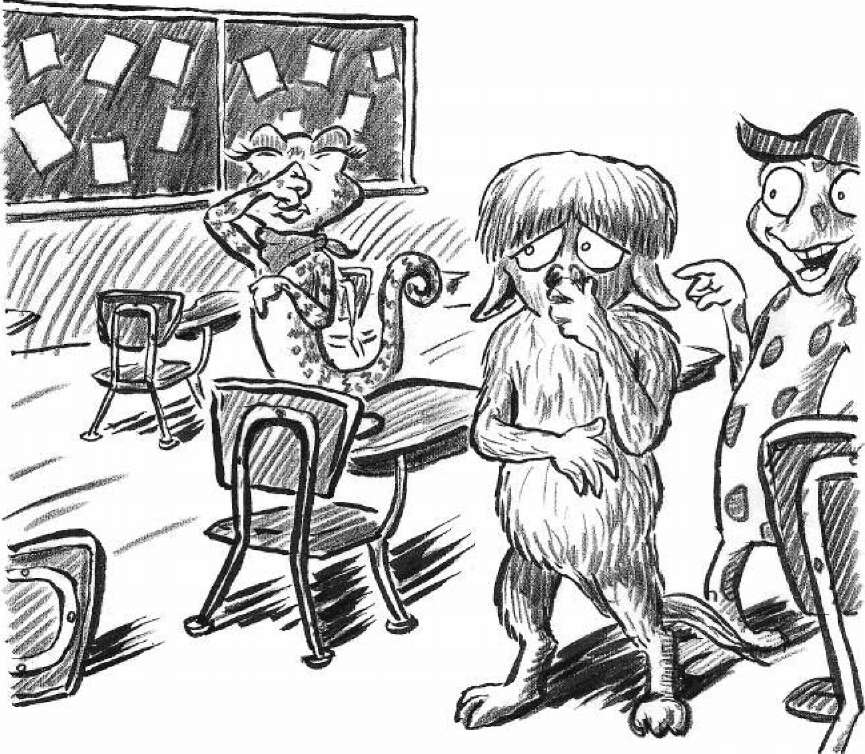 Finally, even Mr. Ratnose noticed me. "Chet Gecko, why did you leave your seat?"

"Smells like he blasted himself out of it," said Waldo the furball. "Hur, hur."

Now the class laughed uncontrollably. Some of the nearer kids got up and scooted back.

Mr. Ratnose put a fist on his hip. "Settle down, class."

I covered my nose. "I think it's coming from over near the vent."

"What is?" Mr. Ratnose asked. Then the stench wave hit him. "Oh. Sweet Norwegian pie! What
is
that?"

Somewhere along in here, the class finally realized this stench was way beyond anything one kid could have caused. More and more of my classmates were on their feet, moving back from the heating vent.

How can I describe the intense odor? It was the pharaoh of funkiness, the sheik of stenchiness, the grand high pooh-bah of putrid. In the ranks of rank smells, it would be head honcho of the whole dang enchilada.

And all I wanted was to leave it behind. (No pun intended.) Luckily, Mr. Ratnose agreed.

We were way ahead of him. By the time he finished speaking, everyone had jammed into line and was pushing through the doorway. Out in the hall, other classes milled around, eyes watering, noses covered.

It wasn't just our stink. Every classroom in the school was emptying out.

I was champing at the bit to start investigating the Big Stink. But Mr. Ratnose had other ideas.

"Everyone stick together," he said. "To the playground!"

Other teachers must have had the same thought. We all tramped out onto the grass in cheerful, well-organized chaos, like an anthill on a field trip.

I took advantage of the confusion to locate my partner, Natalie Attired.

Along with the rest of her class, she was following her teacher, a tough turtle named Ms. Amanda Reckonwith.

"What's the word, mockingbird?" I called.

She turned and raised an eyebrow. "You mean, what's the stink, rat fink?"

Natalie was a sharp-looking mockingbird with an even sharper tongue. Some say she put the
smart
in
smart aleck.
I'd go a step further. With her common sense and puzzle-solving skills, I'd say she put the
wise
in
wisecracker.

"This smell reminds me of something," she said. "Something that's brown and sounds like a bell."

Taking her by a wing, I said, "Let's go find Principal Zero."

She planted her feet and stared at me like someone who had just brought a bug-eyed alien to the Spring Fair. "You're actually
looking
for trouble?"