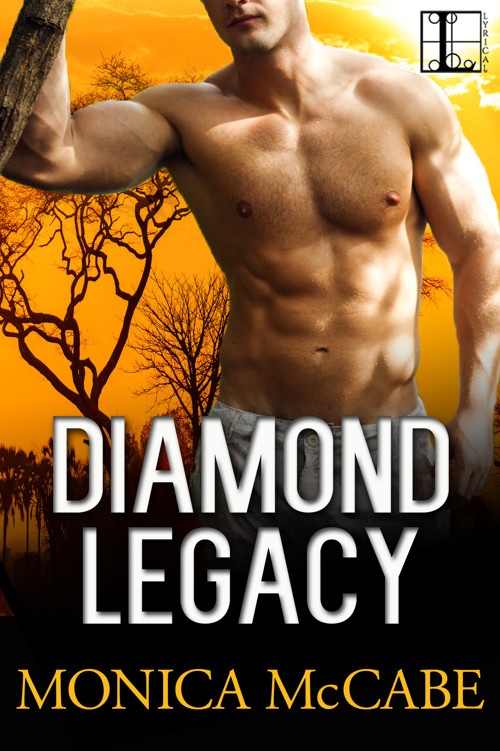 Africa–where diamonds are the currency of the weapons trade, and trust is the only option between two strangers...

Miranda Parrish is a world-renowned veterinarian specialist with expertise in endangered species. She’s fearless and will go anywhere an animal is in need. But when she journeys to Katanga, an animal sanctuary in the heart of Botswana, she lands in the middle of a blood diamond smuggling operation. And there’s only one man who can help her….

Special agent, Matt Bennett’s parents were murdered by a ruthless arms dealer when he was fourteen. He’s devoted his life to avenging their deaths and ending the cycle of violence threatening southern Africa. Undercover at Katanga, he clashes with Miranda. He’s never met a woman so stubborn, who’ll let nothing stand in the way of what she believes in. And he’ll let no one come between him and his vengeance.

Matt and Miranda will have to work together if they want to save Katanga, and both of their lives, before it’s too late.

For Bill McCabe, my partner in travel and adventure. I'm truly blessed to share life's journey with you.

There's a long list of people I owe a debt of gratitude to for their help, friendship, and support in my writing journey. Thank you all from the bottom of my heart. It's been a pleasure having you in my life and I appreciate all that you've shared! Special thanks go out to Corinne DeMaagd - for believing in Diamond Legacy and enhancing my story with a sharp eye and excellent skill as an editor.

Katanga Animal Education Center is not real, but places like it do exist. Animal conservation is growing in Africa as more countries discover the monetary benefits of tourism that result from protecting animals and their natural habitats. International Peace Parks and Game Preserves cross borders and are expanding. They link ecosystems, support sustainable economic development, and jointly manage natural resources across political boundaries. Peace parks and animal conservation centers work hard to protect and preserve Africa's incredible heritage. It's an exemplary movement that continues to face uphill battles, but the results are rewarding on a global scale.

“You shameless little hussy. How many times have you sweet-talked Jason out of a treat this month?” Miranda Parrish tucked a water hose between her knees and grabbed the biggest dental brush in her kit. “Give me a grin, sweet Daisy.” She lightly tapped the elephant’s trunk. “Time to scrub away the evidence.”

The smallest, and by far sweetest, African elephant in residence at the San Diego Zoo lifted her trunk and dropped her lower jaw obediently. Miranda set to work, meticulously scrubbing every square inch of enamel.

“You know,” said a familiar voice behind her, “if you applied the same level of concentration to members of the opposite sex, you might have something more exciting to do on a Saturday than flossing pachyderm pearlies.”

“Stow it, Jason.” Miranda grabbed the hose and rinsed the excess cleansing agent from Daisy’s gums. “Have you nothing better to do than annoy me?”

“Ain’t nothing better than hitting on the sexiest dental zoologist west of the Pecos.”

A drop-dead glare was her only reply.

“Aw, come on. Hank don’t deserve someone as hot as you. That uptight boyfriend of yours hasn’t a clue what to do with those luscious lips of yours.”

“And you do? You’re barely twenty and too arrogant by half.”

“Age has nothing to do with experience.” He gave her a flirty wink. “This Alabama boy can do things to you that would curl your toes.”

Miranda curbed the urge to laugh. For all his bluster, Jason Harvick was the best college intern employed at the San Diego Zoo and showed the most veterinary promise. Unlike others, he never balked at menial labor and thrived on the many hours spent tending animals. With a fresh blond appeal and a willingness to work, he was a staff favorite. He was also full of mischief, and she did her level best to discourage it.

“Your questionable expertise aside, I’d be happy if you just turned off the water for me.” She dropped the hose and tossed her brush into a bucket of disinfectant, then reached up to rub Daisy’s lower jaw. “Good girl, Miss Daisy.”

The elephant’s trunk dropped onto Miranda’s shoulders with a gentle squeeze, and she accepted the awkward embrace. In a way, it felt a bit like Hank’s. Awkward, yet well intended, and above all, comfortable. Dependable. Nothing like the usual adventure-seeking idiots she tended to gravitate toward. She was through with that type. As staff director for the zoo, Hank Meadows was the polar opposite of the Bass Pro Shop outdoorsmen she’d dated since college.

“All I’m saying is”—Jason disconnected the hose and began rolling it up for her—“it’s a dang shame to think of someone like you going for a stick-in-the-mud like Hank. You’ve got more fire in you than that.”

No, she didn’t. That was her sister, Erika. “Please, Jason. Can we leave my love life alone?” Miranda slipped a hand into her sport vest pocket and produced a green apple for the elephant.

Tonight she was cooking lasagna for Hank. A nice bottle of red wine, some soft music on the stereo, and another chance to prove things were as they should be. Not that she needed convincing. Hank was the epitome of domesticity, a man tailor-made for settling down.

“Have it your way,” Jason said, his voice laced with disgust. He dried his hands on a towel, then grabbed his backpack and pulled out a large manila envelope. “Here, take this.”

Something jittery danced in her stomach. “What’s that?”

“Heck if I know.” He shrugged. “Maxwell yanked me out of the chimpanzee enclosure and said to deliver it
posthaste
.” The last word he said with puckered lips, imitating the very staunch, very British, head veterinarian.

Miranda shot him a disapproving frown before taking the envelope and breaking the seal. When she pulled out the contents, something fell to the ground, and she reached to pick it up.

Her heart skipped a beat. Africa.

“It’s about time!” Jason tossed his backpack down and stared at her with hopeful expectation. “Much longer and you’d sprout roots.” He shuddered at the horror. “Where to?”

She caught her lower lip between her teeth and glanced away from the excitement in his eyes. Why now? Why couldn’t this have come eight months ago when she would’ve jumped at the chance to get out of California? Now she had direction, a planned future. This was no time to be flying off to the wilderness for…for…she glanced at the letter.

Katanga Wildlife Center is fortunate to have in its care a rare and valuable albino hippopotamus. Estelle is small, only four-thousand pounds, but suffers from an advanced abscessed lower canine. We would greatly appreciate someone of your notable expertise to perform a difficult, but much needed dental procedure.

Jason’s impatience near had him twitching, yet she was reluctant to answer. “The Katanga Wildlife Center in Botswana has a hippo with dental problems,” she finally conceded.

“Africa?” He whistled long between his teeth. “Lord have mercy. You’re gonna need an assistant, right? Someone to lug your equipment, take notes, catch your dinner? Tell me that’s me.”

His eyebrows shot up so high, it was a wonder they didn’t fall off. “You’ve got to be kidding. What’s to consider? It’s Africa. Lions and tigers and bears. Are there bears? I don’t know. I’ve never been there!” The last he emphasized with plenty of melodrama, practically begging her to agree to go.

“It’s not that simple. There’s Hank to consider, for one.”

“Hank? Hank! Come on, you can’t take him. What good would he be on the Serengeti? The man can’t rope a steer in a pen. How’s he gonna catch a rampaging hippo with a toothache?”

“Okay, for one, I’m certain the rampaging hippo is already penned up, and two, the Serengeti is in Tanzania, not Botswana.”

He rolled his eyes. “Logistics. Who cares? The point is, it’s an all-expense-paid trip to safari land, a once-in-a-lifetime chance. How can you even hesitate?”

He was right, of course, and not so long ago she wouldn’t have thought twice. But now there were complications. A job interview at University of Southern California next week, Hank’s hint of an important question to ask her, and she’d just ordered a new Toyota Rav4 online in a shade of slate blue that perfectly matched her eyes.

“I can’t blindly fly off to the other side of the planet without consulting my family first.” She should use more emphasis if she wanted to sound convincing. The words were true, but they came across like an excuse.

“Yeah, you do that,” Jason said. “But come Monday morning, I expect you to arrive wearing standard safari gear. And I’d better be the named assistant. Because I’m telling you now, tomorrow I’m going down to the local Safaris R Us and loading up.”

Miranda shook her head with a laugh before sliding the documents back in the envelope and tucking it inside her kit. “Hold off on spending your life savings, at least until Monday.”

“Fine. But don’t you dare let Humdrum Hank talk you out of this!”

“I’d appreciate it if you’d quit maligning my…boyfriend. He happens to be a fine man.”

“Yeah, whatever you say. Just remember—it’s Africa. It’s free. And I’m begging you.”

With a lopsided grin she systematically packed up her dental kit, gave a final pat to Daisy, and headed for the lab.

Miranda stacked dirty dishes on her kitchen counter and glanced at the pricey bottle of Australian Shiraz. It was three quarters gone, dinner was now a memory, and she’d yet to broach the subject of Africa with Hank.

The Wildest Heart by Terri Farley
The Judging Eye by R. Scott Bakker
My Latest Grievance by Elinor Lipman
The Muse by Matthews, Nicholas
The Kama Sutra of Vatsayayana by Richard Burton
Finding The Limits (The Limitless Trilogy Book 1) by Cole, Harper
Children of the Wolves by Jessica Starre
Wild: Wildfire by Cheyenne McCray
Spy Out the Land by Jeremy Duns
Keeping Mum (A Garden Society Mystery) by Carlson, Alyse
Our partner