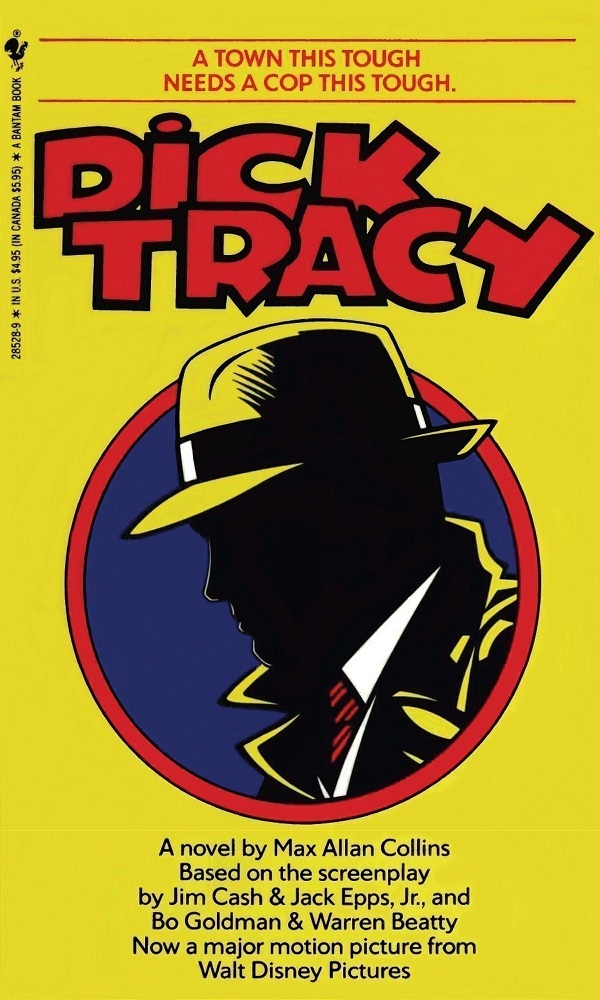 There’s big trouble on the wrist radio: Five of the city’s deadliest hoods lie dead in a downtown garage—and their boss, Lips Manlis, will soon be number six. “Big Boy” Caprice is on the rampage. With his number-one gun, Flattop, loose on the streets, Big Boy plans to destroy his gangland opposition and unite all the tough guys in town—Pruneface, Mumbles, Itchy, Numbers, and the rest—in an organized reign of terror. Just one man stands in Big Boy’s way: Dick Tracy.

Soon, the ace detective will be hit from all sides: by the ferocious Big Boy himself; by Breathless Mahoney, the sizzling chanteuse who wants to snag Tracy away from his girl, Tess Trueheart; and by a mysterious, faceless figure, The Blank, who may have found the ultimate way to end Tracy’s crime-stopping career for good.

EDITOR’S NOTE
The following novel was freely adapted from the screenplay to the film
Dick Tracy
and draws on the rich sixty-year history of the great detective. While true to the story of the film, there are scenes and characters that do not appear in the finished motion picture.

No part of this book may be reproduced or transmitted in any form or by any means, electronic or mechanical, including photocopying, recording, or by any information storage and retrieval system, without permission in writing from the publisher.
For information address: Bantam Books.

Bantam Books are published by Bantam Books, a division of Bantam Doubleday Dell Publishing Group, Inc. Its trademark consisting of the words “Bantam Books” and the portrayal of a rooster, is Registered in U.S. Patent and Trademark Office and in other countries, Marca Registrada. Bantam Books, 666 Fifth Avenue, New York, New York 10103.

A TIP OF THE FEDORA

I would like to thank my agent Dominick Abel, for his patience and persistence; Elyce Small Goldstein, director of licensing, Tribune Media Services; Matt Masterson, my friend and the world’s top TRACY fan, who provided research material and support; actor Ed O’Ross, “Itchy” in the film version of this story, who lent support and help; Robyn Tynan of Disney Publications; Barrie Osborne, Executive Producer of the film, for providing valuable guidance; George Bamber of Mulholland Productions for his intelligent and thorough suggestions; Mike Argirion, editor of Tribune Media Services, for helping put this project in motion; Robert S. Reed, president of Tribune Media Services, who (with my former editor Don Michel) selected me as the writer of the “Dick Tracy” strip back in 1977; Lou Aronica, Robert Simpson and Colleen O’Shea of Bantam Books; Paul Thomas, for background information regarding vintage recording devices; my lovely, talented wife, Barbara Collins, for helping prepare a detailed synopsis of the screenplay; and my ornery seven-year-old son Nathan, who provided inspiration for a certain character in these pages.

To the memory of Chester Gould.

Thank you, Chet . . .
from the eight year-old kid
you encouraged.

O
nce upon a hard time, in a cold gray city on a cold gray lake, a nameless urchin, the pockets of his frayed jacket filled with other people’s watches and wallets, ducked into an alley, avoiding the cop on the beat.

The boy scooted behind a cluster of garbage cans, startling a mangy cat who was nestled there nibbling at a fish head. The cat, as gray as the overcast afternoon, and looking only slightly less scruffy than the boy himself, reared back and snarled, its fur standing up like porcupine needles.

Scrawny as it was, the cat looked to be a vicious beast, but the kid wasn’t scared; almost routinely, he slapped it with one of the leather billfolds and the cat yowled and scurried down the alley, its claws clicking on the bricks.

The gray cat might have seemed an omen of bad luck to the kid, only it wasn’t exactly black, and besides, the kid didn’t believe in any kind of luck, good or bad. To him life was a matter of survival, pure and simple—well, more like impure and not so simple. He was as much an animal, a scavenger, as the cat he’d spooked.

He was eight years old, but he didn’t know that; he was the illegitimate child of a chorus girl who’d left him behind at her rooming house, but he didn’t know that, either. He knew only a life of stealing and scrounging at the behest of a tramp called Steve, who had no last name that the kid knew of, but still had one more name than the kid. In fact, that was as close to a name as the kid had: the Kid. And the Kid could not remember any life before this one, this life as the chattel of his burly, unshaven Fagin.

The boy huddled against the brick wall of the building, hoping the beat cop—there was a pair of them, actually—would not check the alley. He was big for an eight-year-old, though sewer-rat skinny, his hair a reddish mop sticking out from under an oversized cap copped from a railroad worker; his threadbare black jacket had once belonged to an adult—its elbows were carelessly patched, as were the knees of his raggedy blue denims. Within his shoes, which were too large for him, were pieces of cardboard, covering the holes in the soles.

Winter was coming, and he and Steve would soon hop the rails to a warmer clime—or at least so the Kid hoped. That was the best part of living with Steve—seeing the world; the Kid had been in small towns, he’d spent time on farms, he’d seen the West, he’d been to New York, too. This here town was okay—plenty of open-air markets to cop fruit and vegetables off stands, some nice parks to sleep in, railroad dicks less mean than some places; but it was no place to spend the winter, the wind riding in off the lake like a witch on her broom, chilling your bones.

Convinced the beat cops had moved along on their way, the Kid sighed with satisfaction as he spread his spoils out before him on the table that was the alley’s brick floor. Three wallets and two watches. Steve ought to be pleased. The watches—one a fancy wrist number on a leather band, the other a gold-plated pocket watch—would together bring in three or four bucks from that pawnshop fence Steve had been using.

But when the Kid dug into the wallets, he came up near empty: one buck in one, two bucks in the other, and nothing at all in the third. Usually a five-spot would show up in one out of three. The Kid sighed again, this time in weariness and frustration. Steve would beat the tar out of him, sure.

Of course Steve beat the tar out of him on general principles, even after a good day; but a disappointing haul like this would get the Kid a whale of a licking. A bad haul was out of the question: the Kid wouldn’t go back to Steve,
couldn’t
go back to Steve, with little or nothing. Not unless he wanted to lose a tooth or two, or go to sleep for three days, like that one time.

A loud rumble made the Kid jump. It sounded like a freight roaring into the trainyard, or maybe the noise the ground might make cracking apart in one of those earthquakes they say happened out West sometimes.

But it was only the sky.

On this cold gray dying afternoon, as what there was of the sun began slipping below the horizon like another sneak thief, the Kid gathered the money and the watches, stuffed them in his pockets, and dumped the wallets in the nearest trash can; and he moved down the alley, till he found the recession of a doorway where he could get out of the line of watery fire the rumbling sky was promising.

At least it wasn’t cold enough, yet, for snow, the Kid thought, and he pulled the lapels of the oversize tattered coat up around his face and leaned back against the door.

And it gave way.

Just a bit; but it had been unlocked and just barely shut, or barely not shut, and the Kid almost started to believe in luck. Because he suddenly had a dry, relatively warm place to be.

Slipping inside, shutting the door quietly, he found himself in a garage. Various trucks and automobiles were parked in neat rows, over across from him, and off to the left, along the Seventh Street side, were double garage-doors. To the right was a service area where the hood of a car was up, the engine being worked on, only not right now. Tools were scattered around, but it was after hours. A glassed-in office area was in the corner adjacent to the service area. Nobody was working here.

But five men were playing.

Playing cards, poker, their chairs pulled up to a bright yellow table. On a fruit crate nearby was a radio with a plug plugged into a couple of extension cords trailing off somewhere; from the radio came a hillbilly band, making a racket.

A pretty crummy backdrop, the Kid thought, for five guys who were dressed up so natty. It seemed odd to him, for a second, the expensive wide-lapelled suits with the colored silk shirts and bright ties and fifty-buck fedoras—till he saw the men’s faces, and realized who it was that dressed so fancy at crazy hours, at ill-suited places.