Read Die for Me: A Novel of the Valentine Killer Online

Die for Me: A Novel of the Valentine Killer 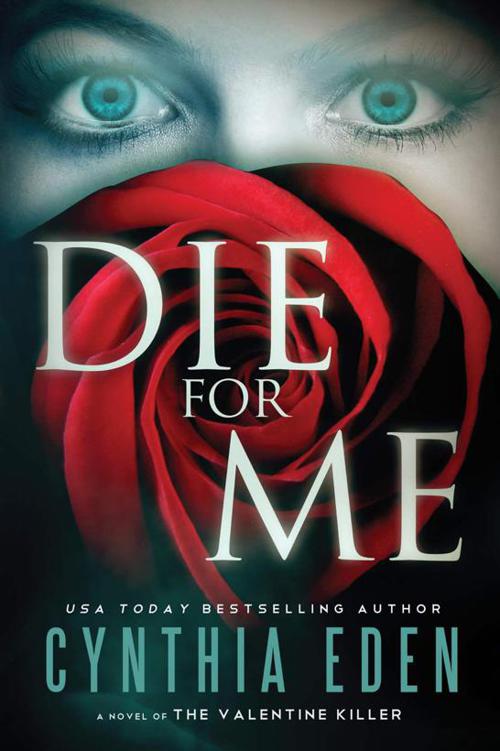 This book is for all of the amazing romantic suspense readers out there. I hope you enjoy the story!

It had taken Savannah Slater a long time to die.

New Orleans police detective Dane Black stared down at the dead woman, noting the series of shallow cuts that lined her arms. Then his gaze rose to her chest. She’d been stabbed in the heart, and it looked as if the killer had twisted the knife once he’d plunged it into her chest.

Hell. The scent of blood and death was heavy in the air. Behind him, Dane could hear the sound of retching, no doubt coming from the fresh-faced uniform who’d found the body tossed like garbage near the edge of the park.

Even Dane’s stomach had knotted at the sight of her body, and he’d sure come across his share of twisted shit when he served his tour in the Middle East.

“You ever seen anything like this?” The uniform had gotten enough control to voice the question. “I mean, Jesus Christ, it looks like someone tortured her.”

Because someone had. Her wrists had been bound with rope, her ankles tied with the same thick hemp. Duct tape covered her mouth—no doubt to muffle her screams while her attacker worked on her.

It hadn’t been an easy death. Not with all of those slices on her arms. Some deep enough to sever veins and tendons. But those wounds hadn’t killed her. The perp had just been playing with her until the moment he drove his knife into her heart.

Dane leaned forward. The victim’s right fingers were curled around something. His eyes narrowed. It looked like…Savannah Slater was holding a bloodred rose in her right hand.

Dane’s back teeth ground together as he stood. Savannah Slater had been missing for just over seventy-two hours. When the reporter hadn’t shown up for work, her boss had started hunting for her. Hunting was what they did best at the
New Orleans News Journal
.

Dane had thought the reporter might have just gone in deep for a story. He’d figured that she’d turn up with a cover-grabbing headline.

She’d be grabbing the headline, all right. Only he’d never expected this…

Just a few days until February fourteenth. Valentine’s Day. And with the way she was killed…that knife in the heart…and that rose in her hand…
The press would flip when they made the connection. “Yeah,” he finally said slowly, “I’ve seen something like this before.” Not up close and personal, but he’d heard the stories. Stories of other women who’d been tortured and killed.
Just like Savannah.
But not in New Orleans. Those killings had happened years ago, way up in Boston.

Not down in his city.

He studied her body again. The wounds on her arms were deliberate and far too perfectly placed.

“Why’d the prick dump her here?” Dane’s partner demanded. Mac Turner ran a hand over his cleanly shaved head. Sweat glinted
lightly off his dark-coffee skin. “My niece plays at this damn park. Any kid could have found the body.” He exhaled. “Dumping a body for a kid to find. Another sick freak on our streets.”

“He left her here because he wanted attention.” The perp hadn’t wanted to wait several days or weeks for the body’s discovery. This was an in-your-face dump. They’d been lucky, though, that no curious six-year-old had stumbled upon it. The reporter had been found just after dawn by a jogger.

Dane stared down again. Savannah Slater’s dark hair feathered over the ground. She’d been beautiful. By all accounts, she’d been well liked, had a great family, lots of friends.

A crime tech took a photo, and the flash lit up the scene.

“Sometimes I hate this job,” Mac muttered as he turned away.

Sometimes Dane did, too.

The uniform, looking like he might be sick again, stumbled back. His horrified gaze was still on Savannah—hell yeah, the sight of her tortured body could make a person gag. That hole left in her chest was huge. But this wasn’t Dane’s first ball game, not by a long shot.

He studied the scene with clinical eyes.
Duct-taped her mouth. Bound her wrists and ankles.
The flesh around her wrists was bruised a dark brown. How long had she been bound? The whole time she’d been missing? She wouldn’t have been able to fight back that way. She would have been the perfect prey.

After one final look at the victim, Dane headed for his car, his shoulders hunched. Before he’d taken even five steps, the roar of oncoming vehicles reached him. His head lifted, and he saw a news van rushing way too fast around the curve up ahead.

Sonofabitch.
The feeding frenzy had already started. The first van was followed by another, and another…
and another
.

“Cover the body!” he barked. “And make sure no one contaminates my crime scene.” He’d put up tape, done his best to block off the area, but if some overeager reporter came stumbling through…

Then the reporters were there, swarming with their microphones as the cameramen lumbered behind them.

Dane took a deep breath, tasted death once more, and prepared to face the sharks.

Katherine Cole glanced up at the small TV located just inside of Joe’s Café. Her hand curled around the cup of coffee that Joe had just slid across the counter to her.

Savannah Slater.
The name whispered through her mind.

“Such a damn shame.” Joe shook his head.

Katherine blew on her café au lait and nodded.

A female reporter’s face—sad, tense—filled the screen. “Skywatch Five has uncovered exclusive details about Savannah Slater’s attack.” An image of a crime scene flashed on the screen. Katherine could see police officers moving quickly behind a line of yellow tape. “Savannah Slater was missing for over seventy-two hours, and it is believed that she was held and tortured during that time.”

Katherine’s stomach knotted even as her skin chilled.
The world is full of sick psychos. Just another monster hunting in the dark.

Another face appeared on the screen. A man. Handsome. Pissed. He glared at the camera and said, “I have
no comment
at this time. The investigation is ongoing.”

The news cut back to the reporter. “While lead detective Dane Black isn’t talking, Skywatch Five sources have revealed that Ms. Slater was found bound, her wrists and ankles tied with thick rope, in a local park. Duct tape covered her mouth, and she had been stabbed directly in the heart.”

The reporter continued, “A single red rose was found clutched in Ms. Slater’s right hand, and with this crime occurring so close to Valentine’s Day, police at the scene seemed especially tense.”

The coffee mug slipped from Katherine’s hand and shattered on the floor.
No, please, no.

“Katherine? Katherine, you okay?” Joe frowned at her.

She stood, stumbled back, and rammed into Ben Miller, another frequent early morning patron of the café.

His hands wrapped around her shoulders to steady her. “Did you get burned?” His brown eyes were worried.

Shaking her head, she hurriedly pulled away from him. Moving away was instinctive for her.

She’d been coming to the small café since she moved to New Orleans, and she usually talked to both Ben and Joe each morning.

“Viewers may remember another killer who bound his victims in a similar way, before he stabbed them in the heart,” the reporter continued, eyes piercing through the screen. The lady had done her homework. “Michael O’Rourke was suspected of torturing and murdering four women in Boston. He was dubbed the Valentine Killer because he always stabbed his female victims in the heart and left each victim holding a red rose in her palm.” A dramatic pause. “His last kill was almost three years ago, and
though several manhunts have been conducted as authorities tried to track O’Rourke, he has never been captured. Several law enforcement officials with the Boston Police Department have even theorized that the infamous killer may have taken his own life in order to avoid facing a lifetime behind bars.”

“I remember that guy,” Ben murmured. “A sick sonofabitch.”

Yes, he had been.

The reporter was still talking. “With Valentine’s Day just a few days away, police would not speculate as to whether the killer was Valentine or a copycat who could be looking to emulate his crimes.”

The room went dim. A dull roar filled Katherine’s ears, and she was pretty sure she was about to faint. “I-I’m sick, Joe. Sorry…got to…go.” Then she turned and ran—or weaved—and barely heard Joe and Ben as they called out after her.

Her hands slammed into the door, and then she was outside. The warm air—it always seemed to be warm in New Orleans, even in February—hit her like a slap, but it couldn’t banish the chill from her bones.

Savannah Slater had been stabbed in the heart.
Katherine
knew
Savannah. And with the story that Savannah had been pursuing, there was no way the manner of her death could be a coincidence.

A message, yes, but anything else?

This wasn’t happening. It couldn’t be.

A nightmare.
Maybe she was dreaming. Or maybe the bastard had hunted her down. He’d told her…
I’ll never let you go.

Winterlude by Quentin Bates
Conway's Curse by Patric Michael
New Moon 1 by Kimaya Mathew
Hidden by Donna Jo Napoli
To Have and to Hold by Serena Bell
A Love for All Time by Bertrice Small
Mockingbird by Kathryn Erskine
A Grave Talent by Laurie R. King
Fault Line by Chris Ryan
The Juniper Tree by Barbara Comyns
Our partner