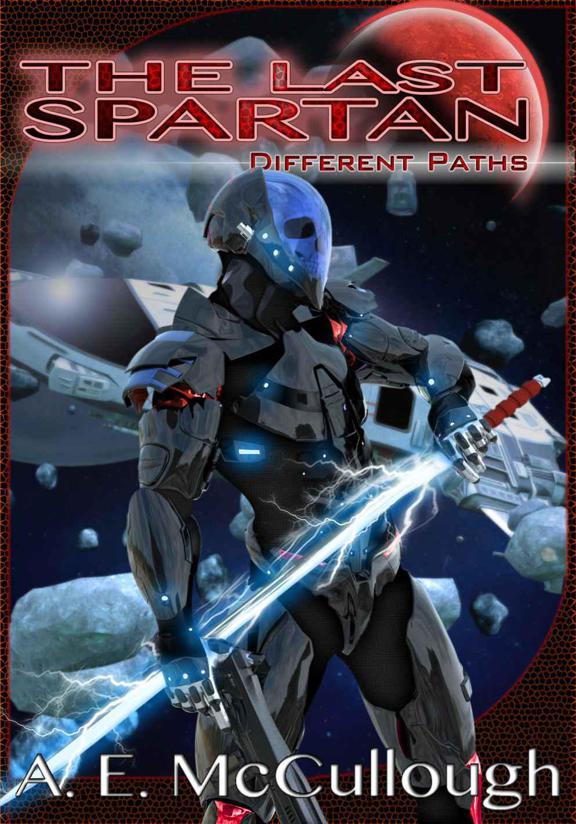 A battle of brothers…

At this very moment, there was no
conscious thought. The individual known as Iaido to his friends and Achilles to
his enemies was nothing more than the living embodiment of his swords. He
leaped and rolled, blocked and countered, attacked and defended all without
thought.

Each of the three warriors had their
own advantages and disadvantages in this battle. The point was to capitalize on
their strengths while minimizing their weakness. In this aspect, Iaido had
several advantages over his brothers since he was wielding two katanas which
gave him plenty of flexibility in his attacks. Granted, Aeneas was also using
two weapons but a gladius was best used up close. Hector was using a single
katana but seemed to be able to manipulate the surrounding shadows into a
shield.

Iaido’s foremost weakness had nothing
to do with himself; it had to do with the General. That was their main target
and that was something he had to protect at all cost. His one major advantage
was that Aeneas and Hector were also enemies to each other. Yes, they were both
against him but neither one could press their attack for fear of retribution.

Available on Amazon in print or eBook format

The Tales of the Wolf Series

The Coming of the Wolf (Book 1)

The Last Spartan: The Great Hunt
Coming in the fall of
2013

A different kind of fantasy novel.

This book is a
work of fiction. Names, character, places and incidents are the products of the
author’s imagination or are used fictitiously. Any resemblance to actual
events, locales, or persons, living or dead, is coincidental.

All rights reserved under International and Pan-American
Copyright Conventions. No part of this book may be reproduced in any form or by
any electronic or mechanical means, including information storage and retrieval
systems, without permission in writing from the author, except by reviewer, who
may quote brief passages in a review.

About the Cover Artist

Phillip K. Aiken is a freelance digital
artist, illustrator, computer technician and writer. He has worked as a
self-taught computer technician for over 7 years and has certifications in
computer programming and computer technology. He currently lives in South
Carolina and can be contacted at:
[email protected]

AUTHOR’S
NOTE
:
I met Phillip when I held a cover contest on the DAZ3D Art Studio forums.
Phillip submitted several cover ideas and eventually won the contest. I am
thrilled to have him as my cover artist.
– A. E. McCullough

The two men watched the silver coin flip through
the air with undisguised interest. A few of the nearby passengers on the tram
aimlessly watched the ancient coin on its short flight. While the coin was
still in the air the smaller of the two men glanced at the mass of people
around them and sneered. He mentally compared the masses to cattle being herded
to the slaughter house; they were totally unaware of their impending doom. He
caught the silver coin and slapped a hand over the outcome. He wanted to savor
this fateful moment. Would they get to live or die? It all hung on the toss of
a simple coin.

His larger companion nudged him. “Come on….let’s
see it.”

With a feral grin, he lifted his hand and cussed.
“Dammit! Its tails! They get to live.”

“Come on my friend, this is our stop and we have a
job to do.”

“One last toss, heads it’s my choice who we kill
first… the husband or the wife and tails, it’s your choice.”

The larger of the two men thought about it for a
split second before answering, “You’re on!”

The coin flipped once more and the fate of some
nameless couple was decided.

Silently they stood up and moved toward the door.
The mass of people on the tram parted at their approach without a word from
either man; young and old, punker or yuppie moved aside without comment. It
wasn’t their style of dress. The flat black body armor was a common sight since
the war ended. Many veterans still wore their old armor like a badge of honor. However,
neither the weapons worn at their waist nor the aura of danger which they
radiated was commonplace.

Either of these would’ve been enough to warrant easy
passage through the crowd but it was the five-pointed star hanging at their
necks which provoked the most fear. No one in their right mind messed with a
Galactic Marshal.

“This is Spartan. I am currently unavailable.
Leave a message and contact codes.” Beep…

“Shit! Achilles, this is the Sergeant Major. I
need you! Contact me as soon as you get this message. You know it’s urgent or I
wouldn’t have called. I have a bounty and I need your help. It could be a
matter of life or death, old friend.”

Clicking the vid-phone off, the old man let his
gaze sweep across the pictures and awards that hung above his desk. His
Honorable Discharge certificate from the UNCF - United Nations Coalition Forces
- hung next to the plaque handed to him by the Coalition President on the day
he was awarded the Medal of Honor. The coveted medal hung in a nearby shadow
box along with the Silver Star, Purple Heart and a dozen other Coalition Awards
of Merit he’d earned over his twenty-two years of service.

Reaching up, he carefully took down an old fashion
photograph of his unit; the slightly discolored sides of the oak frame showed
that he had performed this ritual many times in the past. As he moved to place
it in the open briefcase on the desk, two small arms suddenly wrapped
themselves around his legs.

Reaching down to remove his daughter’s arms, John
squatted down to look her in the eyes. “That’s wonderful Eve. I’m almost
finished here and Amy is getting the skimmer from the garage.”

Cocking her head slightly to the side, Eve’s
platinum blonde locks fell in front of her blue eyes exposing her slightly
pointed ears that marked her mixed heritage. Looking around the office while
absentmindedly toying with a crystal pendant that hung on a silver chain around
her neck, she asked the question he most feared.

“Daddy, why are we leaving tonight?”

John felt his heart twinge at his daughter’s
question. She wasn’t scared, just confused. How does a father tell his only
child that the sins of his past were coming back to haunt him?

Gazing into his daughter’s eyes he saw the
immeasurable trust that the young have in their parents. He knew this was a
wonderful age…before the dreaded teenage years, before boys and shopping and
the independent thinking that comes with growing up. This was an age where
their children still thought their parents knew everything. It was a wonderful
if not frightening time.

Pulling his mind back to her question John said,
“Let’s just say that we have to play a game of hide-n-seek but a grown-up
version. There are people trying to find us, so we have to hide.”

Eve clapped her hands together and just accepted
his explanation. “Okay Daddy. I’m good at hide-n-seek.”

“I know you are princess. Now, let me finish in
here so we can leave.”

Thump. A noise from the front of the apartment
filled the room.

John quickly drew a pistol from his shoulder
holster; a slight hum filled the study as the pistol powered up. “Quick Eve,
hide! And don’t come out until me, Amy or your uncle Achilles comes for you.
Now go!”

Moving to the door, he glanced back in time to
glimpse her blonde hair disappearing into the panic room. Gripping the pistol in
his right hand, finger on the trigger, his left hand cupping the right to
provide counter-tension; the retired sergeant major stepped into the hallway.

Moving slowly, his eyes scanned the area before
moving on. Though it had been nearly a decade since he served, it seemed that
old habits die hard. Only subconsciously did his brain register the empty
spaces where pictures had hung only hours before, the rest of his mind was
absorbed in the environment, listening for unusual noises or watching for movement.
Reaching the doorway that opened into the kitchen, John took a deep breath and
burst through the opening ready to blast anything that moved.

Whatever he was expecting, finding his wife
standing in the kitchen crying was not one of them. With a flick of his finger,
he powered down his pistol and he replaced it in his shoulder holster.

Moving forward to embrace his wife, his instincts
screamed at the wrongness of the situation but he ignored them. “Amy…us leaving
is only temporary. We’ll be back.”

She shook her head as tears streamed down her face
and moved in to embrace her husband. For a brief second she clung to him with
all her might. Pulling out of his grasp, she plunged a butcher knife deep into
her husband’s chest and screamed, “No, we won’t!”

Pulling out the knife, she stabbed him again and
again; stopping only when his corpse lay on the floor in a growing pool of
blood. Amy took one last glance around at her kitchen, pulled a hand towel off
the rack and made a quick cut with the knife. Dropping the knife at her feet,
she tied the two towel pieces together thereby doubling its length. Wrapping
the makeshift cord around her legs right above the ankles, she sat down with
her legs folded underneath her. Retrieving the knife, she placed the razor
sharp edge on the side of her neck, smiled briefly and with a quick slash,
sliced through her carotid artery.