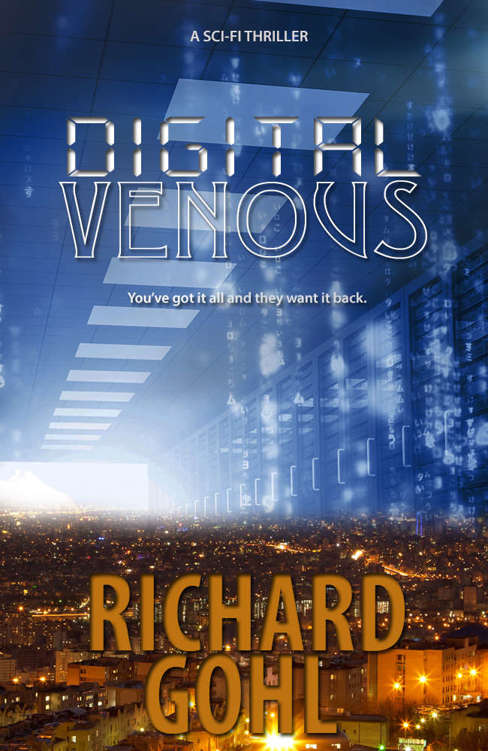 All of the characters in this book are fictitious, and any resemblance to actual persons, living or dead, is purely coincidental. The names, incidents, dialogue and opinions expressed are the products of the author's imagination and are not to be constructed as real. The events in this book are entirely fiction and by no means should anyone attempt to live out the actions that are portrayed in the book.

No part of this book may be reproduced, scanned, or distributed in any printed or electronic form without permission. Please do not participate in or encourage piracy of copyrighted materials in violation of the author's rights. Purchase only authorized editions. All rights reserved.

Thanks to Margherita, without whom this book wouldn’t have happened.

Thanks to Tom Flood and Kate Hogan for editing and feedback Thanks to Anne Smith and Graham Gohl for the faith.

Thanks to Phillip K. Dick, Peter Carey and artist Pange Niemoeller for inspiration.

When I do count the clock that tells the time,

And see the brave day sunk in hideous night;

When I behold the violet past prime,

And sable curls all silver’d o’er with white;

When lofty trees I see barren of leaves,

Which erst from heat did canopy the herd, and summers green all girded up in sheaves,

Born on the bier with white and bristly beard;

Then of thy beauty do I question make,

That thou among the wastes of time must go,

Since sweets and beauties do themselves forsake,

And die as fast as they see others grow;

And nothing ‘gainst Time’s scythe can make defense Save breed, to brave him when he takes thee hence.

AS A NAPEAN city guard, Shane was often required to track down rogue members of his own people; individuals who had taken to the pastime of “getting real.” He had personally dealt with more than fifty incidents, where Napeans in altered states had enacted their violent fantasies as creatures of prey on the Subterranean population.

There were buriers, burners, burrowers, bashers, baiters, biters, and all manner of physically augmented weirdos from the extinct pantheon of wild creatures: bats, cats, wolves and weasels, lions and leeches, insects, birds and reptiles.

These activities were carried out, sometimes by individuals, often by small groups of Napeans who abducted or killed Subs for their own nefarious purposes. It was a form of hunting role-play in which Napeans would use the latest in surveillance technology, evade guards, somehow leave the city, and hunt their underground prey. Sometimes it was murder, sometimes rape; occasionally, torture had been involved, and sometimes, Shane had seen evidence of all three.

He couldn’t understand such social dissolution: these were Napeans—men, usually—with the world at their fingertips, who had become bored and broken off from regular ETP use to start their own club. They preyed exclusively on Subs.

Shane had once followed a group called “Jaguar Gods.” They altered their bodies to make themselves more feline: had fur implants, retractable claws, and dental alterations to include carnivorous incisor teeth. They could have done all this in the virtual world, but they had to make it real.

When they were fully clothed this particular group looked like any other Napean fashionistas, but after arresting and jailing two of them, Shane had seen a sight that haunted him for a very long time. A jaguar was caught sneaking in through the Crafers gate one morning. It had taken three guards to restrain the creature. He had been placed in a cell and Shane’s old colleague, Captain Charles Crompton, had called him up to the Crafers watch-house. “You’ve got to see this,” he said to Shane on arrival. “Caught him with his hand in the biscuit barrel.”

“Congratulations. Getting serious up there, are you?” asked Shane, teasing. “… A regular night for us, really…” replied Crompton.

“How many?” asked Shane.

“Three dead in Crafers, but we don’t know how far this Tom-cat’s been roaming.”  Shane walked through the ground floor of the building to the cells at the rear, and there in all his naked glory was a Napean known as Warwick Smith. He had short black hair on his torso, arms, legs, and face—but it had grown somewhat unevenly, and amongst it there were patches of exposed red skin. His nose had been flattened and a few wiry whiskers added. His dead eyes were a silvery color. He was lying down with tail curled up between his legs.

He was truly insane. Over many years, his fantasy had taken hold and later manifested in the body as a fully realized monstrosity. On many occasions he had satisfied his desire to taste Sub flesh and blood as part of the jaguar ritual.

Shane whistled in astonishment and asked, “Does it talk?”

“I’ve tried. Nothing,” said Charles. “Just territorial angst. You try.” Shane stepped up to the bars.

“Good morning, Warwick. How are you today?” No response. “What were you doing down in Crafers, old chap?” Warwick sat on the bed perfectly still, hands resting on his knees, and just stared coldly.

“Let me in there—I’ll have a quiet word.”

“Going to unleash some of that famous Wing charm?”

Shane pulled his hand back and both arms went up in the air in a non-threatening gesture. “Easy, easy…” A faint hissing noise could be heard and Shane even saw hackles on the creature’s neck and shoulders upstanding.

“Okay, look, I just wanted to point out that… I know you don’t like Subs, which is fine,—I don’t like them either, even captain Compton here, isn’t mad on them… but we don’t eat them, do we? Doing that can cause big problems…” Shane continued like this for some time, but Mr. Jaguar was exercising his right to remain silent.

Shane had to agree that Subs lived like savages and were parasites on the Napean people, but treating them cruelly, worse than animals, was not good for business. Pound for pound, Subs were faster and stronger than Napeans, easily angered and when driven by revenge, almost always fatal to members of the Napean population.

The desire for retribution had fuelled various Sub forays into the Napean network and indeed the city, often with catastrophic results. It was up to Shane to keep the two groups separated to prevent such escalations, and they had to work together to keep it civil.

Shane completed his work from day to day, enjoyed the company of his wife when required, had an active game life and, at times, was called away on business to see after some security threat or other.

Shane could have gone on like this indefinitely. He enjoyed his life. His health was impeccable. For some people, Nano-Enzyme Therapy never agreed with them and euthanasia was the inevitable outcome, but not Shane. Since becoming a Napean he had enjoyed an excellent run of health. He had lost his eye sight once (for two months), been severely burned eleven times from friendly laser fire, shot with old school guns too many times to remember, died twice (heart attacks), had six transfusions, and a broken back. Shane was a survivor and a testament to N.E.T. He was well-adjusted and living in a truly civilized society. Napeans had free time. Time to play, time to think, time to learn and love. Most of them, however, were rather too bored to do any of this, and indulged in elaborate forms of escapism.

Napeans enjoyed freedom from the tyranny of a material world. Society had never known such freedom. They were living at the apex of humanity. What did they do with this rare historical opportunity? Absolutely nothing.

Sure, there were do-gooders worrying about the state of the race, the future, the planet, the environment, and the plight of the Subs, etc. But hell, Shane was a hundred and forty years old; if he had have cared so much, he would have taken that trip out to Saturn thirty-eight years ago with all those other well-intentioned guinea pigs... and where would he be now? Sucked into a black hole somewhere. The intrepid five hundred interstellar explorers had vanished.  There were no signs of foul play or mishap—they just vanished. Understanding of black holes and the dark energy force mortifism was then scant.

Now, there was far more confidence in space travel, ever since mortific energy patterns could be seen and predicted. Mortific anomalies in space—best described as being like weather cells on the Earth’s surface, but without the limitations of air, land, or water. The energy was all around, was passing right through us like an aquifer rising and falling through a body of land. Mortific energy came through the universe in tides. Once called a black hole, a mortific vortex had unimaginable gravitational suction: an invisible, million-year-old vacuum cleaner which would one day collapse in on itself and make a new galaxy. Some were as big as a fingernail, others, the size of a planet. The energy was now being used to power space travel.

Shane was not particularly interested in scientific theory. Whether or not they were to find utopia on another planet was not his concern. Seriously, he didn’t think it existed and in the meantime he was at the head of his field keeping Napea free from Sub parasite infection.

An Act of Redemption by K. C. Lynn
Believe Me (Hearts for Ransom Book 3) by Evans, Georgia A
Casting Shadows by Sophie McKenzie
Eldren: The Book of the Dark by William Meikle
Dare to Dream by Debbie Vaughan
Pastrami on Rye: An Overstuffed History of the Jewish Deli by Ted Merwin
Lone Star by Paullina Simons
If Walls Could Talk: An Intimate History of the Home by Worsley, Lucy
Mr. Vertigo by Paul Auster
School's Out...Forever! by Kate McMullan
Our partner