Read Dinner at Mine Online 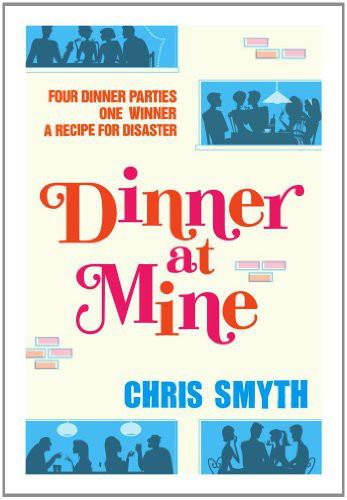 Chris Smyth was born in 1980. He is a journalist for
The Times
and lives in north London.
Dinner at Mine
is his first novel.

The right of Chris Smyth to be identified as author of this work has been asserted in accordance with sections 77 and 78 of the Copyright, Designs and Patents Act, 1988.

Dinner at Rosie and Stephen’s

Dinner at Matt’s (with Charlotte)

Dinner at Justin and Barbara’s

Dinner at Marcus and Sarah’s

Dinner at Rosie and Stephen’s
One

‘Did you remember to get yuzu juice?’

Rosie looked up from the chopping board and called louder out of the kitchen door.

‘Did you remember to get yuzu juice?’

In the hall, she heard Stephen slam the front door and drop his bag on the floor with a thump.

Rosie’s voice never quite carried out to the hall. She chopped a few more beetroot wedges before replying again, listening to Stephen’s footsteps coming towards the kitchen.

‘What are you saying?’ he demanded as he appeared in the doorway, flushed and slightly out of breath from the journey home.

‘Hello, darling,’ she said, putting the knife down to go over and give him a kiss on the cheek. ‘How was work?’

‘Hello,’ he mumbled back at her, exhaling sharply. Rosie couldn’t detect any alcohol on his breath. ‘What were you saying?’

‘I was just wondering whether you got a chance to go to that Asian delicatessen near your office.’ Rosie could feel him staring at her as she moved back behind the chopping board.
‘Do you remember that I asked you this morning to try to find some yuzu juice?’

‘What the hell is yuzu juice?’

‘It’s a sort of Japanese fruit. Something like lime, I think.’

‘Oh God, are we having people round?’

Rosie sliced another beetroot before answering, watching Stephen as his eyes moved round the kitchen, taking in the large pots on top of the stove, the casserole in the glowing oven and the
detritus of garlic husks, aubergine tops and unidentified trails of seeds scattered along the worktops.

‘Yes,’ she said. ‘You haven’t really forgotten, have you?’

‘Oh bugger, we’re not doing that stupid
Come Dine with Me
thing, are we? Is that tonight?’

Rosie chopped the next beetroot in half quite brutally.

‘I thought something with figs and honey might be nice. It would go with the rest of the meal.’

Rosie felt the evening’s first twinge of anger as she watched him standing there, working out when to say what they both knew he was going to say.

‘How about a crumble?’

Rosie replied in a flat voice: ‘There are pears in the fruit bowl and blackcurrants in the fridge.’

‘Pears?’ Stephen looked alarmed. ‘I don’t know how to—’

‘Jesus, Stephen, I thought we could do something at least slightly different. It’s hardly a huge departure from apples, is it?’

‘All right, all right. When are they coming?’

‘About forty-five minutes. You’d better get on with it.’

Rosie gathered up the pile of cold, boiled beetroot slices and scattered them into the bowl of lentils she had taken out of the fridge to warm up. She added chopped onion, lemon juice and maple
syrup and tossed the salad more aggressively than the recipe suggested.

Stephen stopped and turned on the way out of the kitchen. ‘By the way, I’m afraid I . . .’

‘Yes, all right,’ she snapped. ‘I can use lime and mandarins instead.’

She was still closing the front door when he rushed out of the living room to confront her.

‘Did you get my message?’

‘I’ve been in such a rush . . .’ Sarah shook herself out of her coat, feeling tiredness begin to advance as she hung it up. If she sat down now, she wouldn’t want to get
up until Sunday afternoon. ‘I thought I’d just nip upstairs to get changed, then we can go straight out,’ she said.

‘So, what do you think?’ Marcus said, a little impatiently.

‘I thought I’d wear my green dress. Are you going to change into something nice as well? That would be—’

Marcus gave her that stare she hated, the one that combined frustration with private amusement.

‘You didn’t read my message, did you?’

‘Well, it was you who said yes to this.’ Marcus prodded expertly at the sore point.

‘I’m not. I just want to agree our approach.’

‘Approach to what? We’re just going round to Rosie and Stephen’s for dinner.’

‘No, we’re doing
Come Dine with Me
It’s a competition. We need to work out how we’re going to win.’

‘Marcus,’ she said as she pushed past him towards the bedroom, ‘we’re just going out to have a nice dinner with our friends.’

How could she be exasperated with him already? They hadn’t even made it past the hall.

‘I’m not worried about our turn yet, but we have to know what we’re going to say tonight.’

Marcus followed her into the bedroom. He seemed so cheerful. Was she being unreasonable? No, because he was never cheerful these days except at someone else’s expense.

God, that was a horrible thing to think about someone, wasn’t it?

‘Look, Marcus,’ she said, trying to sound conciliatory. ‘I just want to have a nice, enjoyable evening talking to our friends.’

‘Well, that bit’s up to them. Depends how enjoyable you find talking about kitchen appliances. Or how the baby’s constant drooling is actually a sign that he’s terribly
advanced for his age.’

‘Please don’t be rude about our friends, Marcus. I really hope you’re going to be polite.’

‘Of course I’m going to be polite.’

‘Good.’ Sarah took off her suit jacket and began unbuttoning her blouse.

‘That’s the approach I was going to recommend, you see? Be very friendly, and say complimentary things about the food.’

‘But afterwards be quite strict about scoring it. We won’t mention the flaws, but we need to make sure we remember them.’

‘Marcus . . .’ She tried to look stern, but knew this would be difficult, standing there in her bra.

‘Look, I’m not saying we should cheat, or be unfair, or anything like that. Just, you know, precise. Make them earn the marks.’

‘Do you have to take it so seriously?’

‘There’s no point in doing it otherwise.’

‘What about having fun?’

‘That is the fun. Honestly, Sarah, I think it’s you who’s not getting into the spirit of things. Have you even looked at the menu?’

‘Marcus, I’ve not had time.’ She turned away from him to take off her trousers. Maybe he had a point. She was hardly in the mood to be the life and soul herself, was she? All
she really wanted to do was have a large glass of wine and go to bed early. In fact, that was more or less all she ever wanted to do now. Perhaps it wasn’t Marcus; perhaps it was the thought
of going out into the cold again and talking for hours that was making her irritable.

‘Chilled Spinach Soup with Avocado and Crunchy Bacon Croutons to start,’ Marcus read. She hadn’t noticed he was holding a notepad. ‘Well, add bits of fried bacon to
anything, it’s going to taste nice, isn’t it? So we really need to hold them to a higher standard there.’

‘Then Breast of Duck with Pomegranate Molasses and Okra. Who knows whether they’ll pull that off? It reeks of Trying Too Hard.’

Sarah exhaled sharply. No, it was definitely him that was making her irritable. She was standing there, wearing only her underwear, and what was he doing? Waiting in the doorway reading out a
menu. He wasn’t even looking.

‘And serving it with Candied Beetroot and Lentil Salad? I don’t think that’s going to work. Not the same sort of flavours at all. It doesn’t even go with the vegetarian
stew.’

‘Marcus . . .’ Not that she felt up to doing anything, obviously, but he hadn’t even noticed.

‘Then Ricotta with Figs and Honey for pudding. Well, it’s definitely not fig season. I can’t stand green figs; there’s no point to them at all if they’re not black
and oozing and that isn’t going to happen at this time of year. Not a good sign.’

‘Marcus, they’ve cooked for us before. You enjoyed it.’ She rummaged through the wardrobe, looking for the green dress.

‘Actually, I remember it being distinctly mediocre. The lamb was overcooked and the salad was watery. If there’s no improvement on that I don’t think we’ve got much to
worry about.’

‘Is this because you find Rosie and Stephen boring?’

‘No, not at all. It’s nothing to do with that. It’s just part of the competition.’

Sarah struggled to zip up the back of her dress herself, not wanting to ask him for help. ‘Look, just be nice for me. Please? It will be so embarrassing if you are rude about the
meal.’

‘Weren’t you listening? I’m going to be nice about the meal. And then if it’s bad, I’ll give it a very harsh mark afterwards. OK?’

Sarah snagged the zip on her finger and swore silently. ‘Let’s just go. I don’t want to be late.’

A damp, auberginey waft escaped from the pot when Rosie lifted the lid. She prodded at the contents anxiously with a wooden spoon, and a chunk of vegetable bobbed gently in the
stew. It was too watery, she decided, not nearly gooey enough. Maybe it would be all right in another hour. She turned up the heat and dumped in another few spoonfuls of tamarind paste and most of
what was left in the jar of honey. She wouldn’t be needing it for dessert now. The mixture bubbled thickly as she stirred it, burping up a sickly sweet gust much more powerful than she had
anticipated.

Immediately, Rosie decided she had overdone it. The dish was ruined. The evening was over already and the competition lost. She might as well throw everything away and tell everyone to stay at
home.

Before and Ever Since (9781101612286) by Lovelace, Sharla
Chase by Jessie Haas
His Want by Ana Fawkes
The Infected (Book 2): Karen's First Day by Zuko, Joseph
Against Gravity by Gary Gibson
Blue Boy 1: Bullet by Garrett Leigh
Tied Up, Tied Down by James, Lorelei
The Countess by Lynsay Sands
Monachi: Masters of Water and Fire by Jade Sánchez
Footsteps by Pramoedya Ananta Toer
Our partner