Dirty Harry 10 - The Blood of Strangers 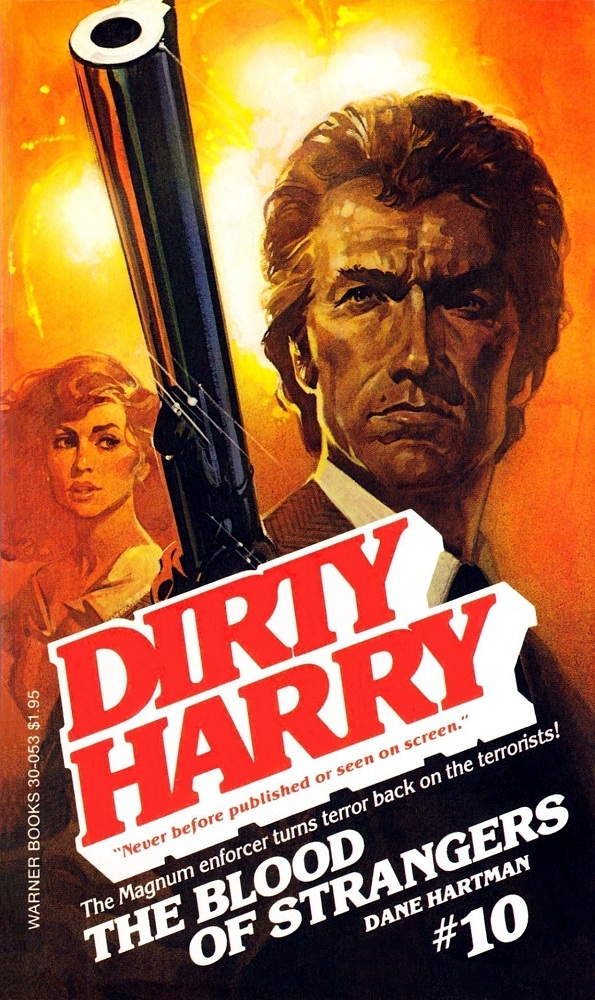 DIRTY HARRY—
BREAKING THE RULES
AND MAKING HIS OWN!

Terrorists! Airports and public places are their stage. Civilians are their targets. The spread of chaos is their game. Now Dirty Harry wants to play—for keeps. On battlefields from Frisco to Beirut to El Salvador, in the company of a beautiful T.V. newswoman, he leaves a trail of hot blood and bullets as he searches beyond the Libyan connection for the source of this savagery. Dirty Harry—breaking every law to get the criminals, making his law to fit the crime.

Apparently Kayyim had come to the end of his speech for there was a scattering of applause that gradually built in intensity. Kayyim nodded in acknowledgment and had turned away from the podium, about to reclaim his seat.

Harry kept his eyes on the man in the white sports coat. He was not applauding. One hand had slipped under his coat. Harry leaned forward, hoping for a, better look. But a man just in front of his suspect had abruptly risen from his chair, blocking Harry’s view.

Then he caught sight of him again. He was fully erect, his arm extended. The sun caught a metal object in his hand and glinted off it. Harry wasted no time. He sprang from his seat and into action!

DIRTY HARRY  #10
THE  BLOOD
OF
STRANGERS

H
e was a small man with nothing to distinguish him, so when he wandered into the international terminal at four-thirty in the morning, no one paid him the least bit of attention. Of course, there weren’t many people around at this sad gray hour: a few custodians, a bored security man with a Styrofoam cup of coffee in his hand, and a Venezualan couple who had somehow become stranded and were now waiting for a six-thirty flight to the destination they’d expected to reach the night before.

The Small Man carried with him a worn gray satchel, which also was not unusual. The gray satchel, however, contained an elegantly constructed bomb with a timing device which would have been considered unusual.

The Small Man had been here before, reconnoitering the area at all times of day and night. He compiled the data he required in order that the operation would have maximum effect. Not only was the exact hour important; where the bomb was to be placed was a matter of equal significance.

In this case, the most strategic location was also the simplest. The Small Man sat down on a bench and pretended to be resting his feet. Unobtrusively, he slipped the satchel beneath the bench, waited for a few moments longer, then continued on his way.

He was confident that the satchel would not be disturbed. Having surveyed the terminal in advance, he knew that the cleaning crew had already come and gone and that no one was scheduled to mop or carry out a search for forgotten baggage for several hours.

He proceeded through the complex of terminal buildings until he reached the lot where his friend, Machito, was waiting in a green Chevy. It was parked, with the motor running, far from the glare of the sodium lights.

Machito quickly started the vehicle when he saw the Small Man approach. Machito was too nervous and too high strung. No matter that he had conducted similar operations like this in Central America and in Europe, he lacked the stamina for such assignments.

The Small Man shrugged. “What could be the problem? It is no big thing. I put a bomb under a bench. I walk away. What could go wrong?”

“Plenty,” muttered Machito, “plenty. I have seen so much in my time.”

The Small Man wasn’t interested. He had worked with Machito before, and the way life was, he would probably work again with Machito. He had heard all he wanted about him. He knew his history and his nervous condition backwards and forwards.

The Chevy shot out of the lot with a screech of rubber and a noisy shifting of gears. The Chevy was dependable even so and Machito had a way with it.

The Small Man remarked that he was going too fast.

Machito grinned. It was blinding to look at him when his teeth were bared like this; there was more gold in his mouth than in Fort Knox.

With so little traffic on 101, Machito could not resist accelerating, putting as much distance as possible between them and the airport though the bomb would not go off for many hours yet.

Machito was talking but the Small Man wasn’t listening. He was tired and kept dozing off, having no interest in Machito’s philosophy of life. Which was why he didn’t realize until it was too late, that there was a squad car in back of them. At first, there was only a flashing red light but when it became apparent that Machito had no intention of pulling over, a siren began to scream as well.

It was the siren that woke the Small Man and it took him several moments to orient himself.

The squad car was gaining on them. Looking back, the Small Man saw two cops, one of whom was insistently gesturing them over to the side. Otherwise the road was deserted.

“Pull over,” commanded the Small Man.

Machito, who had his foot pressed way down on the gas, regarded the Small Man as though he’d taken leave of his senses. “What do you mean pull over? The car is stolen, man. Once they find out, we are fucked.”

The Small Man’s face was impassive—and unreadable. “You let me worry about that. Pull over.”

Machito protested again, but this was the Small Man’s show and he did as he was asked.

It took some time before he could slow the Chevy enough to stop it.

The squad car came to a halt directly behind it. Gravel flew up in the air with the intrusion of eight tires.

They were local cops, the Small Man saw right off. That made sense; they had probably entered the city limits a few miles back.

One of them got out of the car slowly, as though he had all the time in the world, and walked up to the Chevy. He rapped on the window on the driver’s side.

Machito threw a sidelong glance at his companion.

Machito rolled the window down. There was a forlorn expression on his face that reminded the Small Man of a starving dog.

The cop was all business. “License, please?”

Machito had a license. An international one.

The cop scrutinized it with his flashlight. He hadn’t been expecting an international driver’s license and seemed not to know exactly what to make of it. “Registration?”

Machito was too paralyzed to react or even to speak. The Small Man then opened the glove compartment and pulled out a registration. He handed it to the cop.

Naturally, the name on Machito’s license and the name on the registration had nothing to do with each other.

“Are you David Lisker?”

The Small Man shook his head. “David’s a friend of ours. We borrowed his car.”

The cop looked every bit as dubious as the Small Man figured he would.

“Do you realize you were clocked doing ninety-two miles an hour in a fifty-five mile an hour zone?”

Machito acted surprised. “I am so sorry, I wasn’t keeping track. I will not let it happen again.”

Not disposed to believe him, the cop said he would be back momentarily.

“I just have to check something out, Mr. Sanchez.”

Sanchez was the name on the driver’s license. Like the car, it belonged to someone else.

Machito turned to the Small Man. “What happens now?”

The Small Man reached over the back to remove a .45 automatic from the jacket lying on the seat.

“I will be back in a moment,” he said and while Machito watched with horrified fascination, he calmly walked towards the squad car. Its signal light was still flashing, making gaudy patterns on the darkened roadway.

“Excuse me, officer,” the Small Man said, keeping his weapon out of sight.

The cop had his window open and his radio on, filling the air with static and the voices of various dispatchers. Undoubtedly, he was waiting for the registration number to be processed by computer. It wouldn’t take long. In a minute or so, he’d learn that the Chevy was stolen.

Unleash Me, Vol. 1 (Unleash Me, Annihilate Me Series) by Ross, Christina
Brightly Woven by Alexandra Bracken
Bridge Too Far by Ryan, Cornelius
Sweet Like Sugar by Wayne Hoffman
Song for Night by Chris Abani
The Library of Forgotten Books by Rjurik Davidson
Caring Is Creepy by David Zimmerman
The Tao of Dating: The Smart Woman's Guide to Being Absolutely Irresistible by Dr. Ali Binazir
The Edge of Always by J.A. Redmerski
The Fire of Life by Hilary Wilde
Our partner