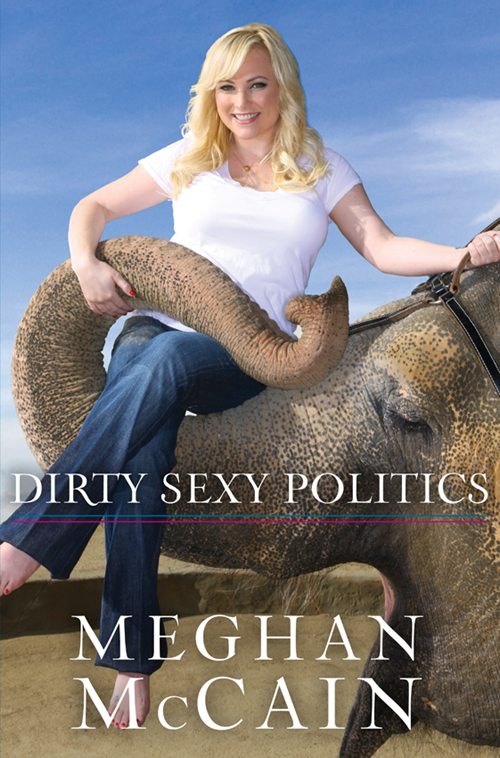 FOR MY PARENTS,
WHO TAUGHT ME TO LOVE LIFE.

Sex and politics are a lot alike.

You don’t have to be good at them to enjoy them.

Chapter 2 - The Suspense Wasn’t Killing Me

Chapter 4 - The Birth of Blogette

Chapter 5 - Elephants in the Bathroom

Chapter 10 - Gentle Folk of the Media

Chapter 11 - How They Tried to Fix Me

Chapter 14 - The Diva Who Fell to Earth

Chapter 16 - How I Started Faking It

Chapter 18 - There Are No Secrets

Chapter 19 - The Art of Talking Points

Chapter 22 - And Then There Was Rock Band

F
reedom is addictive. Once you’ve tasted it, you will hunt for it again and again. And our passion for freedom brings us together more than it pulls us apart. We have fought to remove obstacles in the way of it—we have battled and died, picketed, paraded, rallied, and staked everything we’ve had on it. We founded our country with our desire for freedom and it continues to drive our nation’s energy and progress.

I was raised in a house that was open to new ideas, new people, and open to our differences. We had rules about how to treat others, rules about being honest and respectful. We had rules about tolerance. But they weren’t rules that were supposed to brainwash us and turn us into mini Cindy and John McCains. My brothers and sister and I were raised with a taste of freedom. My parents believed in us—believed in the people we were and the people we would become.

Would they really want me to have tattoos, swear on TV, or even write this book? Uhmmm. Maybe not. And that’s the point. I am not a social or physical extension of my mom and dad—except that I represent their great hope that freedom, and room to grow, is how individuals find themselves and create their own lives. Under that big, wide-open sky of Arizona, where I grew up, there seemed to be room for everybody.

Honesty is a quality of freedom—and is addictive and exhilarating in the same way. By being honest about yourself, you are asking for room and space. You are making a declaration of your humanity and independence. If we are honest with ourselves and about ourselves, suddenly everybody has a little more room to be free. We are more trustworthy if we are honest, too. If we are open, we aren’t hiding anything.

“There are no secrets” is one of my personal mottos. I feel that hiding is a waste of time and energy. Everybody will figure out what kind of human being you really are. So I like to save people the trouble and just lay it out there.
What you see is what you get.
But I do respect the fact that some people are more private by nature than I am.

Which is why, after writing a draft of this book, I took a step back and considered whether I had been too honest. Maybe I was making a mistake to share so many of the intimate details as I watched my dad run for president. Suddenly, it seemed scary to open the windows and let everybody see a snapshot of my life at a time when I was young, impressionable, and feeling a bit frantic. But the children of politicians have a surreal life and it was time somebody started talking about it.

Did I change any names to protect the innocent? Normally I don’t like this kind of thing. But ultimately, I decided to protect the identities of a few campaign staffers and members of the media about whom I had bad things to say. I did not give my parents carte blanche to make changes, nor did my father’s senate office have a look at the manuscript before it was published. So if you have a problem with the contents of this book, hold only me responsible.

In a few instances, nicknames are used. This is meant as a goodwill gesture. I am a work in progress—and embarrassed myself many times during the seventeen months that I was on the road with the campaign. I thought it would be only fair to give a few people the break I would hope they would give me.

Did I make stuff up? No. Apparently there is a long-standing tradition of making things up in a memoir so your life seems worse and better than it really was. I get it. There’s a need for drama and good plot twists. But in the case of this book, I didn’t make things up. As for plot twists, the whole world knows how this book ends already. My dad loses.

If events seem altered, it isn’t intentional. It is how I remembered things. I checked dates and facts, and corroborated my accounts with friends and family, but my stories are decidedly impressionistic rather than reportorial. This is how I remember my time on my father’s campaign.

Another thing this book doesn’t do intentionally: score settling. Lots of political memoirs are written with an ax to grind. The embittered writer comes off like the wisest or folksiest person around and, if the world had just listened to her, everything would have been fantastic. Well, I really hope that this book isn’t like that.

I am not a politician trying to drum up support. I have no plans to ever run for office. My hope is to present a unique account of history without compromising it with attempts to make myself look really good. I turned twenty-three and twenty-four while on the road campaigning and, as you will see, my age and inexperience showed.

I don’t have a secret agenda, in other words, aside from wanting to be honest, entertaining, and also insightful about a particularly interesting election in our nation’s history. My hope is that this book will encourage readers to become involved in the democratic process—and look at politics in a new way. If I’m totally honest with myself, the only score that I may be trying to settle is one with the Republican Party, which seems to have lost its way in the last ten years.

I realize that it is ironic that this book tells the story of my own struggle to get my act together. But it is one of the bizarre realities of life that you can be a mess yourself but still see so clearly what is wrong with others.

Here’s my dream: The political party that identifies with the color red should start taking pills of the same color.

Honesty. Individualism. Freedom. Back in the day, these concepts were the bedrock of the Republican Party. It wasn’t that long ago, either. I am old enough to remember Barry Goldwater, the late senator from Arizona. He was a great conservative visionary, a man of great charm and a playful spirit. As a little girl, I remember goofing around with him. Once, when he and I were having our picture taken together, I stuck my tongue out at him. Without a moment’s pause, Senator Goldwater stuck out his tongue at me right back.

Like my dad, Barry Goldwater had an independent spirit. He was a natural leader and natural politician. And even though he ran for president and lost, the principles that he stood for endured and inspired a generation of conservatives who followed him. He believed passionately in freedom and protecting the rights of the individual—ideas that became fundamental to Ronald Reagan twenty years later, and would lead to his success. Goldwater’s lifelong crusade against groupthink and the expansion of federal government continue to be relevant today, as we wonder where the Obama bailouts and big programs will take us and our country.

I love the ideas of Barry Goldwater, and what he left behind. Yes, his vision was anti–big government, but even more than that, it was pro-people and pro-freedom. He believed in making room and space for individuals to live their own lives, and create relationships and families and businesses with as little interference from others as possible.

It was about removing fences, not building them. It was about tolerance. It was about appreciating differences and new ideas. He was called “Mr. Conservative,” and in Goldwater’s dream for America, and the one he fought for his entire life, there was room for everybody to flourish.

These days, the name Ronald Reagan—as well as his legacy—has become oversaturated, just white noise. Conservatives love to evoke him, using him as an example of whatever brand of politics they happen to be selling. But what they seem to have forgotten is that moderates and Democrats elected Ronald Reagan, not the Far Right. The ideas that he stood for—freedom, the individual, and self-reliance—appealed to a broad political spectrum. He believed that it was our independent spirit and our differences that made this country great.

I have to wonder, if he and Goldwater were alive today and could see where their party has gone in the last decade, what they would think. Somehow the walls closed in. The conservative movement seems hell-bent on constricting our freedoms rather than expanding them. The base has moved to the Far Right and, sadly, it seems to be dying there.

Rather than the party of openness and individual freedom, it is now the party of limited message and less freedom. Along with an ideological narrowness, an important PR battle is being lost. Rather than leading us into the exhilarating fresh air of liberty, a chorus of voices on the radical right is taking us to a place of intolerance and anger. We hear them on the radio and TV. They love to spread fear because it keeps the money rolling in. You know who I’m talking about. The more afraid we are, the richer they get.

Rather than being the party of limitless freedom and rejection of groupthink, they want the Republican Party to become a private club. Not everybody is allowed in, or invited. If you don’t hold the accepted attitudes, you don’t fit in. You are called a RINO, or “Republican in Name Only.”

That’s what they call me, in fact—as if I haven’t earned the right to be included in the party.

Would Barry Goldwater and Ronald Reagan be RINOs too?

Somehow, being a Republican isn’t a political decision anymore. It is a lifestyle choice. You have to look one way, think one way, and act one way. Wear the uniform! Embrace groupthink! And for goodness’ sake, no strangers allowed! Somehow it is wrong to consider modern life and the complications and innovations and changes the last thirty years have brought. The doors and windows aren’t just shut. The curtains are drawn.

Let’s open the windows! I don’t like private clubs or secrets or living in a bubble world. Let’s honor our differences, and different lifestyles, even celebrate them. With this book, I hope to bring some fresh air into the room, maybe knock down a few walls. I wouldn’t mind crashing through the ceiling, too. Let the sky open up, and freedom ring. Hey everybody, come on in!

Building the Perfect Daddy by Brenda Harlen
The Night She Disappeared by April Henry
From This Day Forward: Multicultural Romance by Cassandra Black
A Demon's Wrath: Part II (Peachville High Demons) by Cannon, Sarra
Too Rich for a Bride by Mona Hodgson
In the Middle by Sindra van Yssel
The Industry of Souls by Booth, Martin
The Black Album by Hanif Kureishi
Defending No Where (The No Where Apocalypse Book 3) by e a lake
Steam (Legends Saga Book 3) by Stacey Rourke
Our partner