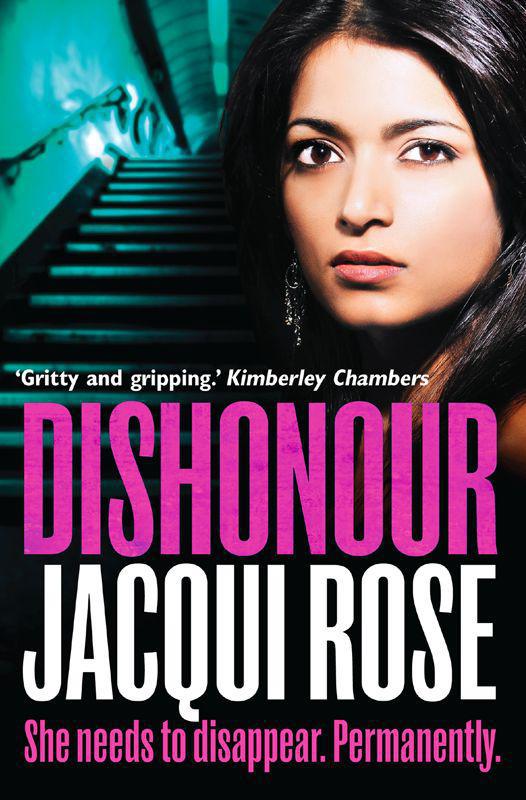 For my mum, Patricia ‘O’ Neill,
because I know it’ll make her smile.

‘Everyone has the right to life, liberty and security of the person.’

Laila Khan opened her mouth to scream but the sound of the sharp slap across her face shocked her into silence. A tiny red mark appeared on her cheek, turning quickly into an angry raised welt as her uncle leaned into her face, spitting with rage. ‘You will do what I say, child. The time has come.’ Wide-eyed with fear, Laila stared at her uncle.

The aromatic smells from the palak chicken and rice on the plate in front of her began to overwhelm her senses. Her body jerked as a wave of nausea hit her. Hurriedly she jumped up from her chair, but her path was blocked by the imposing figure of her angry relative. Unable to stop herself, Laila deposited the contents of her stomach all over her uncle’s brand-new shoes.

Horrified, Mahmood Khan looked down at his feet before throwing Laila back down on the chair. Gripping hold of her hair, he snarled, hatred shining from his eyes. ‘I have been patient with you. Treated you like my own daughter. I allowed you to go to the funeral of your Aunt today, but now my patience has come to an end.’

Trembling, Laila felt a scratch on the palm of her hand and realised she was still clutching onto the reason for her nausea. It was a photograph. Loosening her grip, Laila allowed herself to look at it once more. It was a picture of a man. A man she’d never seen before yet her uncle had just informed her that in less than a week, she was to become his wife.

Tariq Khan sat across from his sister at the dinner table, noticing how her eyes were red, blotchy and swollen. Reminding him of a bullfrog he’d seen last year in Pakistan.

He’d come in later than the others from the funeral and had been greeted by screaming. When he’d gone to investigate, he’d seen Laila kneeling on the floor at their uncle’s feet, begging and pleading with him not to force her to marry.

Tariq had watched as their uncle had called his sister names. A whore. A slut. Accusing her of being nothing short of a disgrace. Spitting at her in disgust, putrid yellow phlegm sliding down Laila’s face. She’d then turned to him. Pulling at his trouser leg and looking up with her big almond-shaped eyes. Begging him to do something to help. But what could he do? How could he have helped her? He’d been powerless. So, unable to see the pain in Laila’s eyes, he’d turned his face away from her, leaving her begging on the floor.

What did she think her uncle was going to let her do? Had she really thought her uncle would let her run around like the other girls in her class? She was sixteen, almost seventeen. Old enough their uncle had told her, too old nearly.

Gravely, his uncle had told him word had got back that Laila had been cosying up with some English boy at school. ‘Flaunting herself, making a fool out of our family name.’

He’d tried to persuade his uncle that no dramatic course of action was needed but his uncle had just stared at him with hostility. ‘She has brought this on herself. You cannot feel sorry for her Tariq, you cannot show weakness. This sort of behaviour has to be stopped. To be punished. We have our family name to think of.
Your
family name.’

And then their uncle had straight away put what was needed to be done into action.

As Tariq continued to look at Laila, still sobbing, he knew she didn’t know how thankful she should be to be getting married. Her life wasn’t over; though it would’ve been, if his uncle and the family had had their way.

Their uncle was from a certain mindset. A small, but dangerous one. A dark sinister part to the otherwise warm, friendly Pakistani community they’d always lived in. His uncle believed in punishment, not forgiveness; revenge instead of mercy. And according to their uncle – just like the father who’d recently been found guilty of killing his daughter after finding text messages from her boyfriend – bringing dishonour to the family had to be avenged.

Tariq had found himself having to beg with his uncle and other relatives, pleading for leniency on Laila’s behalf. Trying to make them see the punishment didn’t fit the crime. Eventually they’d backed down, but on one condition; that Laila get married.

‘Is everything in order?’

Tariq’s thoughts were broken as his uncle spoke to him in a gruff tone. Putting his head down, Tariq muttered in reply, wishing that what was about to happen didn’t have to. ‘Yes, everything’s sorted; just like you asked.’

Mahmood Khan looked at his nephew. There was a lot to do before tomorrow. He was feeling tired but he prayed he would be given strength to deal with the next few hours.

He glanced quickly at Laila as he reached for another helping of rice. Girls were a curse. Especially beautiful ones. The more beautiful, the more of a curse.

Quite frankly, he wasn’t sure what wrongs he’d done to deserve to be blighted with three nieces. But then, Mahmood knew he shouldn’t question what he’d been given – only make the best of it, which if he were to be honest, was very hard to do.

Laila had always been spirited. Her two sisters, who were older than her and already married, had been different. They’d been quiet and willing to please. Understanding what it was to be a woman. Neither of them had the brains nor the dazzling beauty of Laila; they’d been blessed with simplicity and plainness.

From the moment Laila was born, Mahmood knew his youngest niece was trouble. As a baby she’d had the cry of a lion, roaring with discontent. When she was little she’d suffered with stomach problems, no doubt caused by the fire of the warrior in her belly fighting to get out. She absorbed knowledge like the jacaranda tree absorbed water. Her defiance whirling and gliding like a Middle Eastern Sufi dancer.

It was all too much. She was nothing like her mother who’d been a good wife to his brother, although admittedly he’d sometimes needed to show her his word was final. Nevertheless, his sister-in-law was silent and attentive. Two traits a woman should possess, but two traits his niece didn’t come close to holding. Thankfully though, by this time next week, Laila would be someone else’s problem.

It felt to Mahmood that all he’d done for the past few years was battle with his niece to keep her in her place. With each passing year it became more of a struggle as he fought against her unwelcome curiosity of the world. When his brother, their father, had died, the responsibility of looking after them had fallen on his shoulders. Neither Laila or her brother had liked the changes at first but it’d been necessary. His brother had been soft; far too soft for a man who carried the Khan name. Often Mahmood had disapproved at the freedom his brother offered his wife and children, giving them leave to argue, question and educate. He’d often chastised his brother but the admonishment had been wasted, falling onto deaf ears. But then his brother had passed away and everything had changed.

Under Mahmood’s guidance, everyone, including Laila and Tariq’s mother, had been shown the error of their ways. And though the changes had come up against long faces and the occasional question, they’d all eventually accepted the way it was going to be under his rule. All except for Laila.

Mahmood looked at his watch. ‘We better go Tariq, time is short.’

Mahmood pushed his chair away and looked once more at Laila. Her face was marked not only from her tears but also from the fresh bruise now forming on her cheek. Tomorrow when they went out, he’d make her wear her burka, to hide it. By next week the bruise would be gone, and then maybe, for the first time in his life he could be proud of her. Proud to give her away.

Laila’s eyes widened as she watched her older brother and uncle. She was terrified, but she had a rising suspicion something worse was about to happen. Her uncle rarely ventured out at this time of night, preferring instead to have his friends come to him.

Mustering up some courage, Laila directed her question at her brother. ‘Is everything all right, Tariq?’

Before Tariq had a chance to say anything, Mahmood snarled at her, his strong accent punctuating the words.

‘You bring dishonour on this family, then you ask if everything’s alright?’

Laila sat up in her chair, her face reflecting the puzzlement in her tone. ‘Dishonour? Tariq, what’s he talking about? I don’t know what he’s talking about.’

Mahmood banged his fist on the table. ‘Laila, don’t pretend to be the innocent, it’s too late for that … I’ve heard the talk. The whole of the community has. You’ve brought shame on us. On me. Well, it stops right here.’

Laila’s face was drawn and her fear was apparent. It made Tariq feel uneasy and he turned away, not wanting to see the terror in his sister’s eyes.

Mahmood’s arm shot out, sweeping the supper dishes off the table, sending Laila’s untouched plate of food to stain the beige carpet rug.

‘Don’t make a fool of me. Do not make me your enemy Laila … I know all about you and the English boy.’

Mahmood clenched his fist. His niece was a liar. He’d always known it. He’d seen the slyness in her large almond eyes the moment she’d been delivered into this world. It put him in mind of what his grandmother had always told him when he was a boy;
‘the larger the eyes of a woman, the easier for the devil to dance into them.’
And looking at Laila now, Mahmood knew the wise woman who’d lived in a tiny house on the outskirts of Turbat in Pakistan had been right. Mahmood leant forward, leaning his arms on the table; ignoring the fact he’d just put his hand in a pile of cold rice. ‘Raymond Thompson. Ring any bells Laila?’

He sat next to her in class. Yes, she’d talked to him. He made her laugh. They were friends; special friends. She’d even given him a CD of her favourite songs, covering the case with pink smiley stickers. But it’d all been innocent.

One Bad Turn by Emma Salisbury
Crowns and Codebreakers by Elen Caldecott
Ignited by Lily Cahill
Forgive Me by Amanda Eyre Ward
The Mistress, Part Two by Lexie Ray
Silvertip's Trap by Brand, Max
Duncan by D. B. Reynolds
Dexter (Mistress & Master of Restraint) by Chilson, Erica
Memory Theater by Simon Critchley
The Golden Maze by Hilary Wilde
Our partner