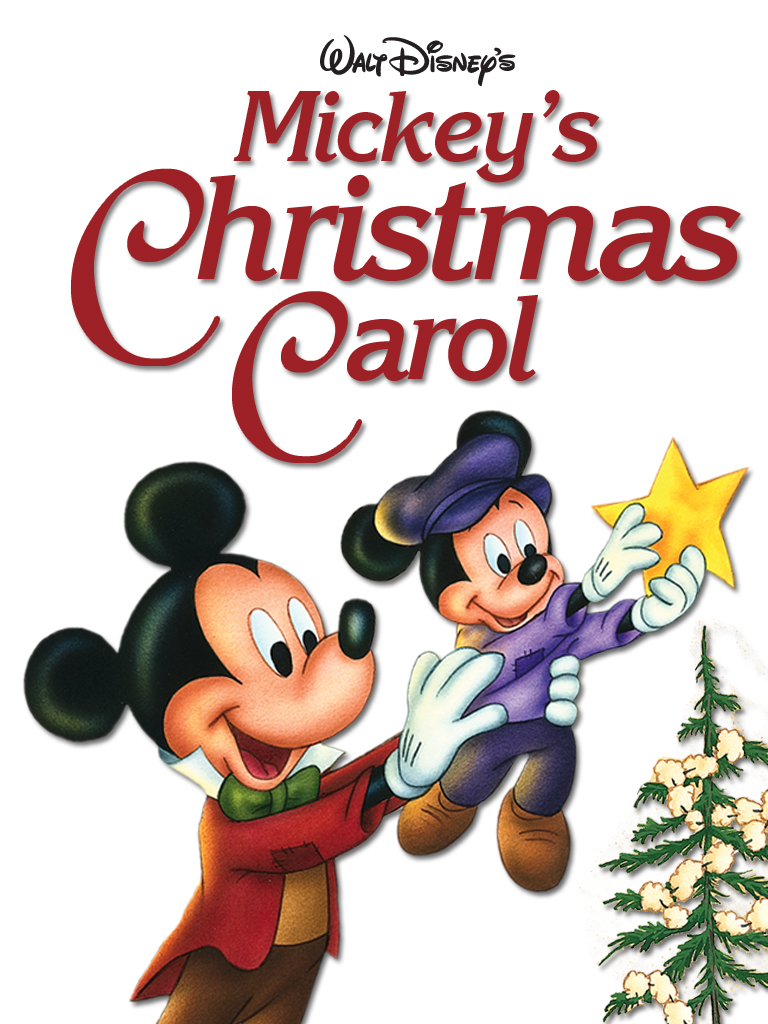 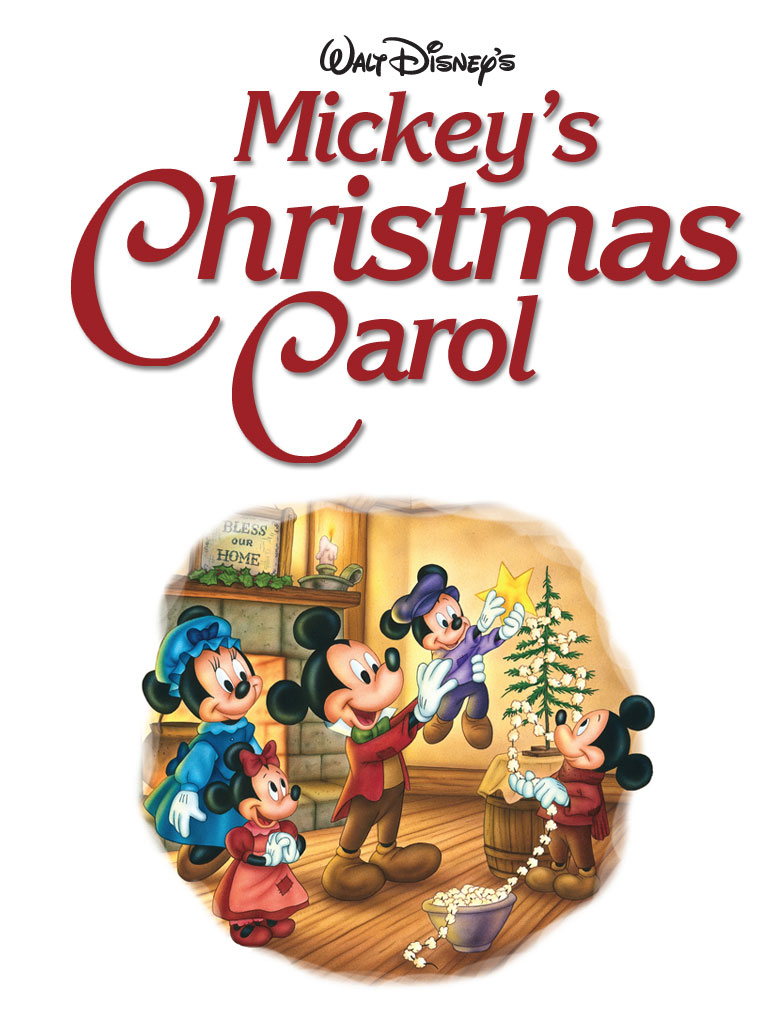 All rights reserved. Published by Disney Press, an imprint of Disney Book Group. No part of this book may be reproduced or transmitted in any form or by any
means, electronic or mechanical, including photocopying, recording, or by any information storage and retrieval system, without written permission from the
publisher. For information address Disney Press, 114 Fifth Avenue, New York, New York 10011-5690.

I
t was snowing in London, England, on Christmas Eve. Ebenezer Scrooge, the richest man in town, hurried toward his office. “Merry Christmas!” someone shouted.

“Bah, humbug,” Scrooge muttered. He didn't know why everyone had to be so cheerful at Christmas time.

When Scrooge reached the door to his office, he looked up at the sign. It read
SCROOGE & MARLEY
. But Marley's name was crossed out. He'd been dead for seven years. 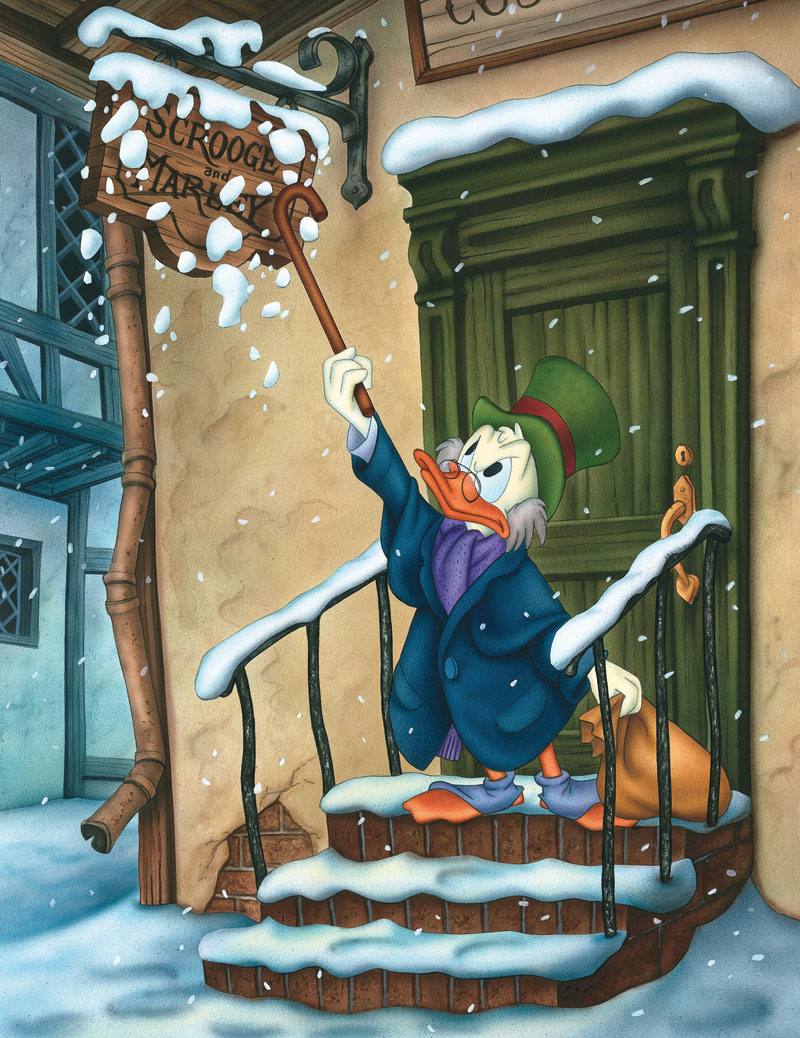 Scrooge and Jacob Marley had tricked people who didn't have much into giving them money. They had gotten very rich and hadn't cared that they'd been unfair.

Scrooge cackled as he thought of all his money.

Bob Cratchit, Scrooge's clerk, was just about to throw a piece of coal into the stove when Scrooge walked in.

“What are you doing?” Scrooge growled.

“I was just trying to thaw out the ink,” Bob replied. He gave his boss a small but hopeful smile.

Scrooge knocked the coal out of Bob's hand and scowled. “You used a piece last week! Get back to work,” he said.

Bob quickly turned back to his desk. 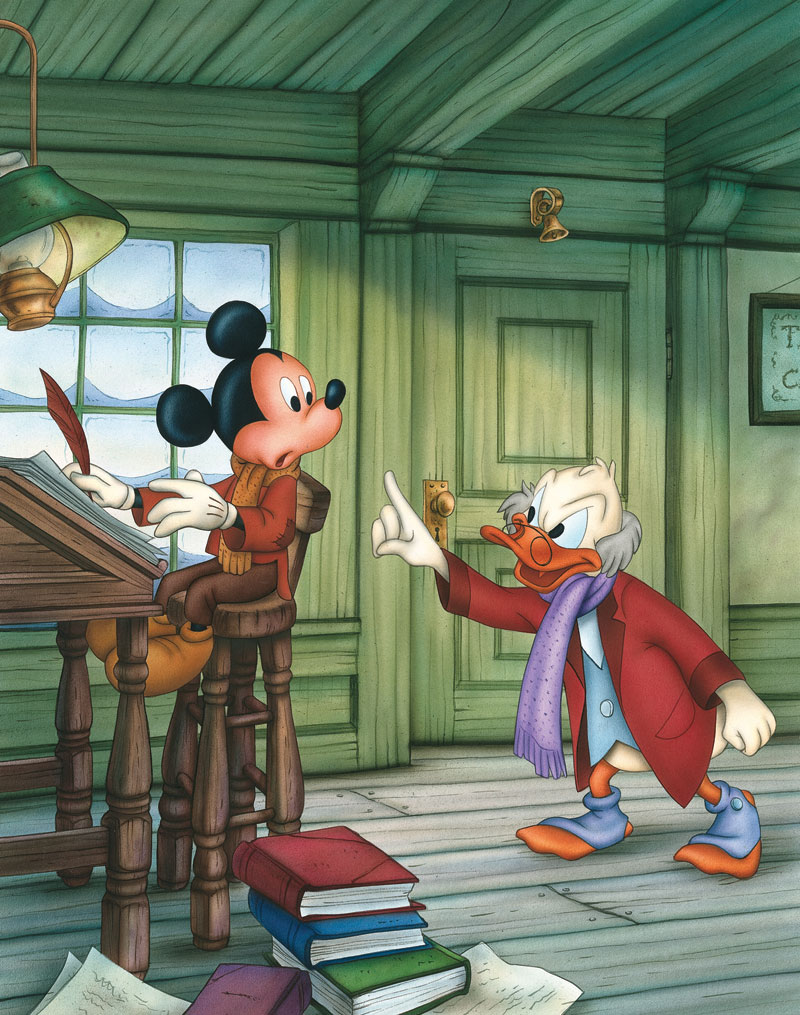 After a few moments, Bob snuck a glance at his boss. Then he said, “Speaking of work, Mr. Scrooge â¦ tomorrow is Christmas. And I was just wondering if â¦ if I might have the day off?”

Scrooge was silent for a long time. “Very well,” he finally said. “But make sure you come in early the day after!”

Scrooge hung up his jacket and hat. Then he sat down at his desk and began to count his money. “Heh, heh, heh â¦ money, money, money!” he crowed.

Suddenly, the door burst open. A young man carrying a wreath walked in.

“Merry Christmas!” the man said. It was Scrooge's nephew Fred.

Fred walked up to Scrooge's desk and gave him the wreath. He thought the office could use some holiday cheer.

“Uncle, I've come to invite you to Christmas dinner tomorrow,” Fred said with a smile. 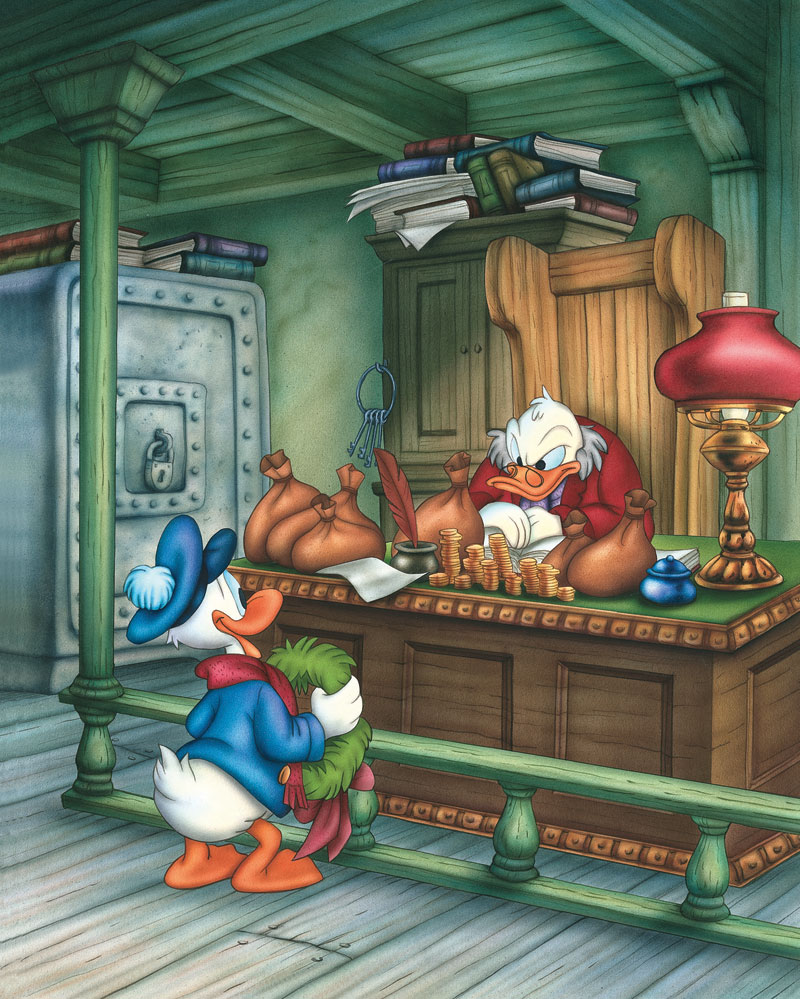 “Oh?” Scrooge asked as he came out from behind his desk. “And will there be plum pudding and sugar cakes and a plump roast goose?”

“Oh, yes!” Fred replied. He nodded his head and smacked his lips.

“You know I can't eat that stuff! Now get out!” Scrooge got up and opened the door. He hung the wreath over Fred's neck and pushed his nephew out into the cold. 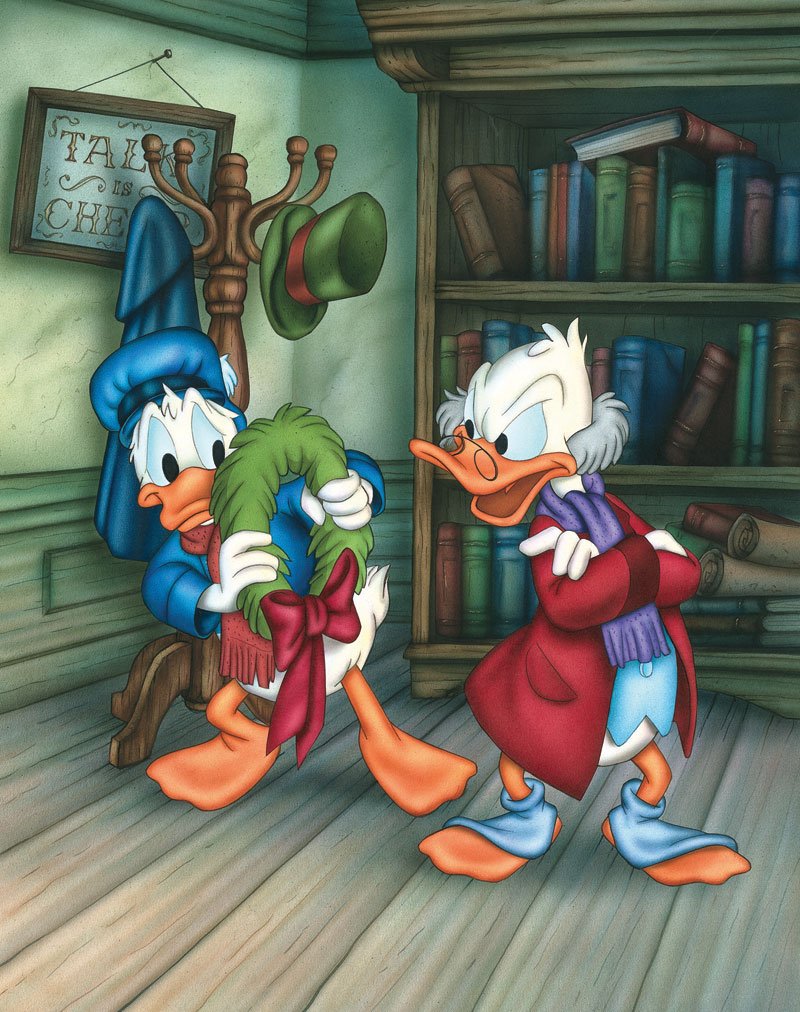 As Scrooge walked back to his desk, the door opened again.

Fred smiled and hung the wreath on the inside doorknob. Then he closed the door.

Later that night, as Scrooge walked home, he had a strange feeling that he was being followed.

When he reached his front door, he looked at the knocker. It was a lion's head. But as Scrooge stared at it, it began to change before his eyes. Suddenly, Scrooge was looking at the face of his old partner, Jacob Marley! “Ahh!” Scrooge yelled. Scrooge hurried inside and up to his bedroom. He closed the door and climbed into his chair. He heard the sounds of clanking chains. He shivered, too afraid to move.

Then a ghost appeared beside him! It was Jacob Marley. He was covered in heavy chains.

“Ebeneeezer,”
the ghost wailed. He rattled his chains. “Do you know who I am?”

Scrooge peered at the ghost from under his top hat.

“When I was alive, I robbed from widows and took money from the poor,” Jacob said.

“You were a fine partner, Jacob,” Scrooge said with a smile. 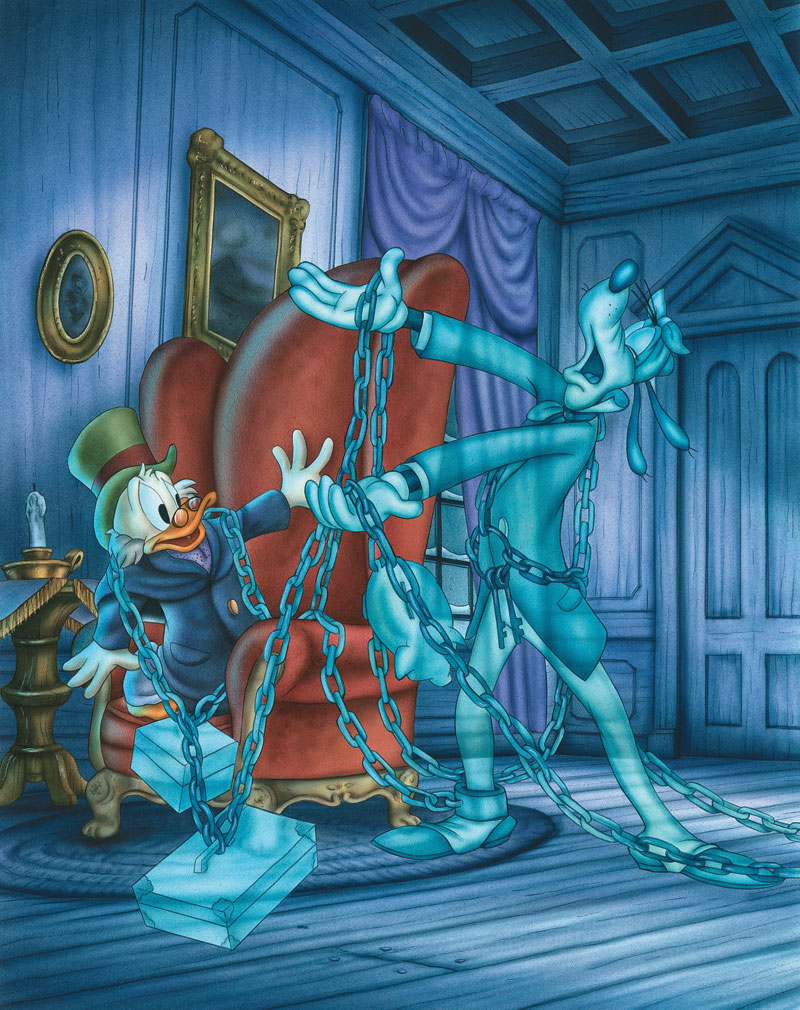 “No!” Jacob replied. “I was wrong. And now I have to carry these chains forever as punishment. The same thing will happen to you. Tonight, you will be visited by three spirits. If you don't listen to them, your chains will be heavier than mine.”

Scrooge was still shaking with fear as he got ready for bed. After checking his room for more ghosts, he climbed under the covers. “Humbug,” he muttered. Then he fell asleep.

But it wasn't long before a noise woke him up.
Ding! Ding! Ding!
His clock bell was ringing. Scrooge opened his eyes to find a little cricket in a top hat on his bedside table. 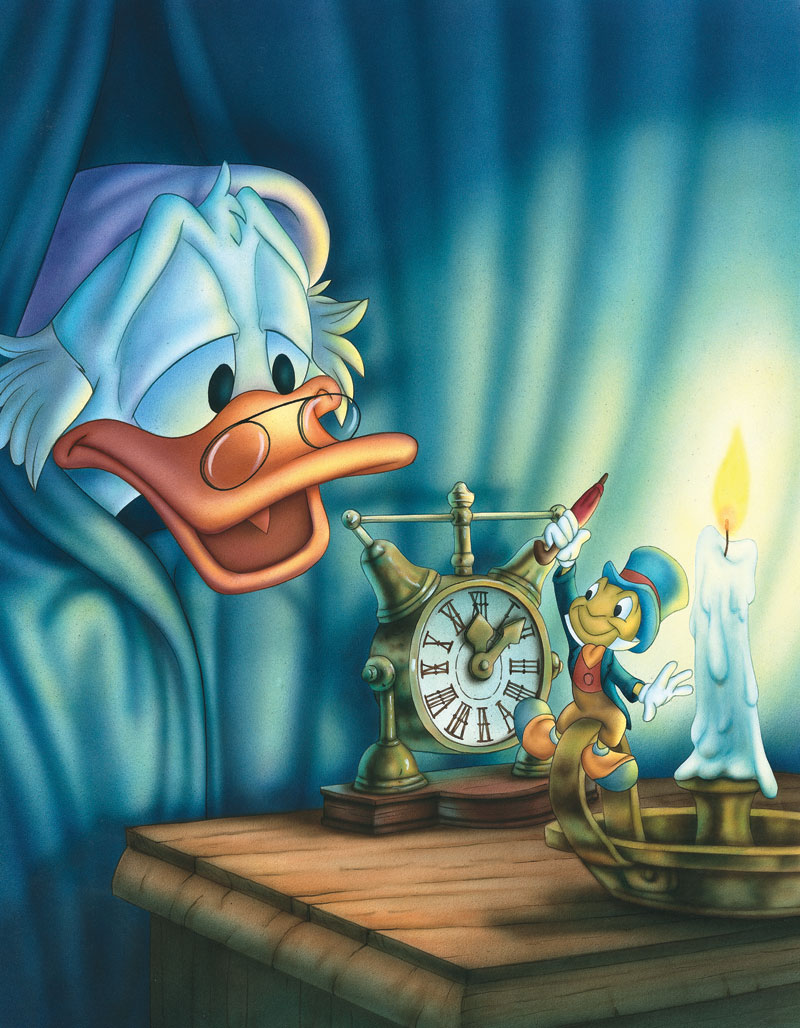 “I am the Ghost of Christmas Past,” the cricket said. “We're going to visit your past tonight.”

The ghost went to the window and pushed it open. “Just hold on,” the ghost said as he hopped into Scrooge's hand.

Scrooge did as the cricket said, and they flew out into the darkness.

The city passed slowly beneath them as they flew high above snow-covered rooftops. 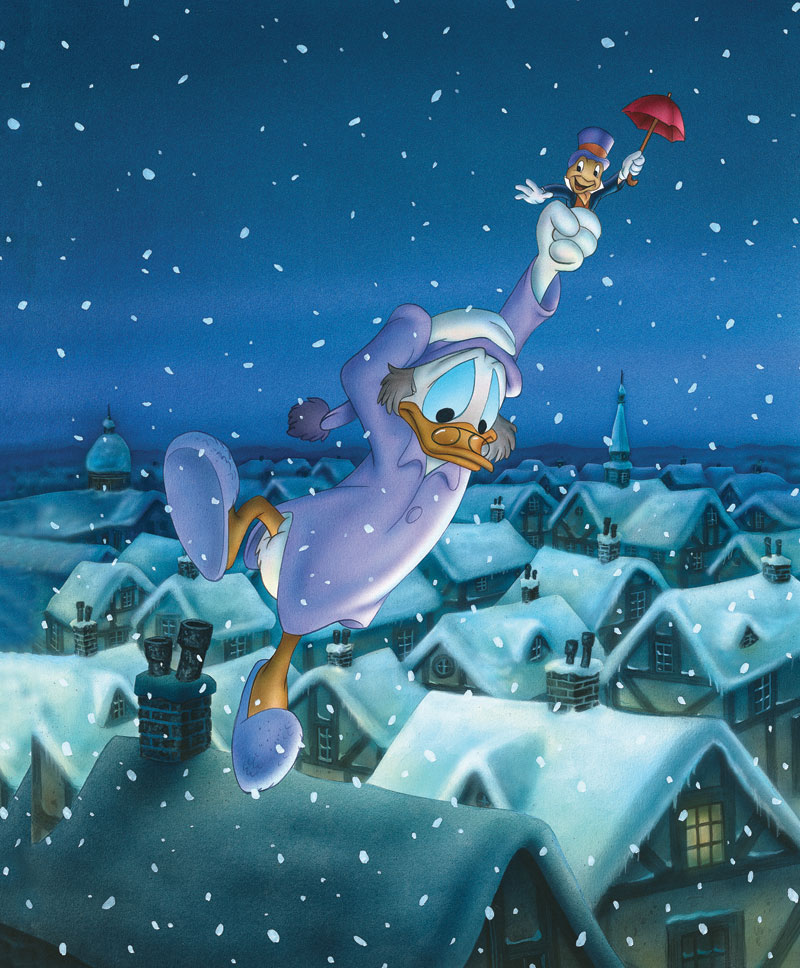 The first stop Scrooge and the Ghost of Christmas Past made was at a little shop. A party was taking place inside.

Scrooge looked through the window.

“It's old Fezziwig's!” he exclaimed. He saw his old boss and many of his dearest friends laughing and dancing inside.

Then he saw Isabelle, the girl he had once loved. She was dancing with a young man. It was himâback before he had become a greedy old man. 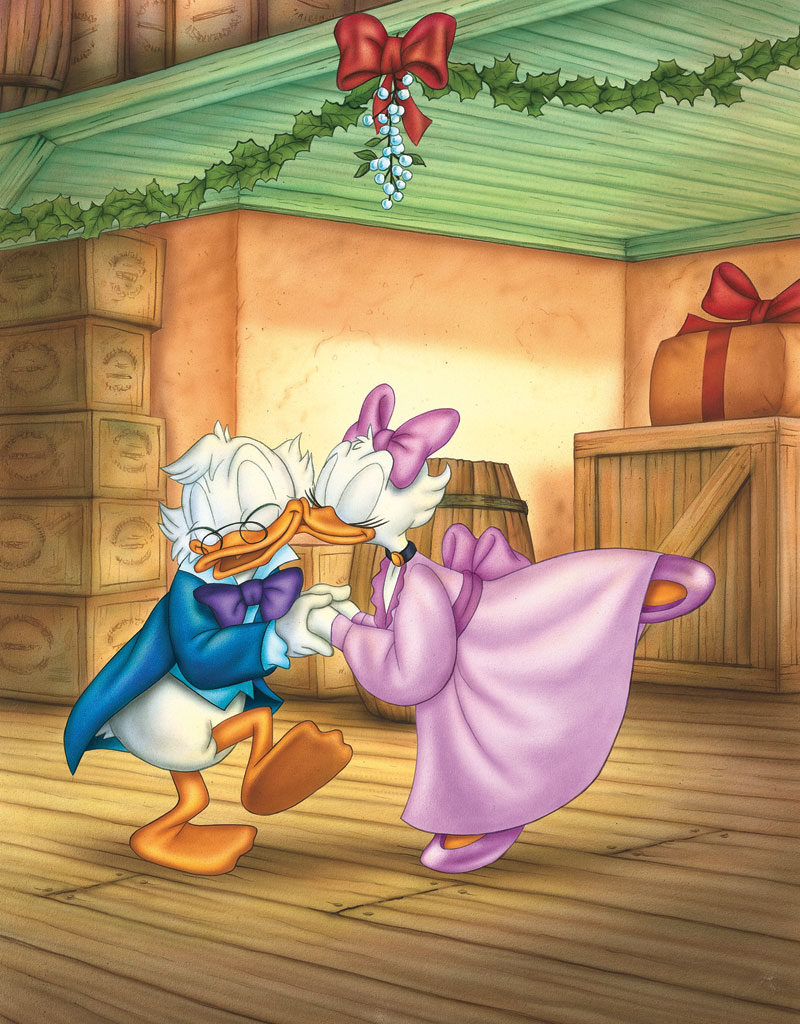 As if reading Scrooge's mind, the ghost said, “In ten years' time, you learned to love something else much more.”

The spirit showed Scrooge another scene. Isabelle and Scrooge were in his counting house.

“Ebenezer,” Isabelle said softly, “have you made a decision about getting married?” 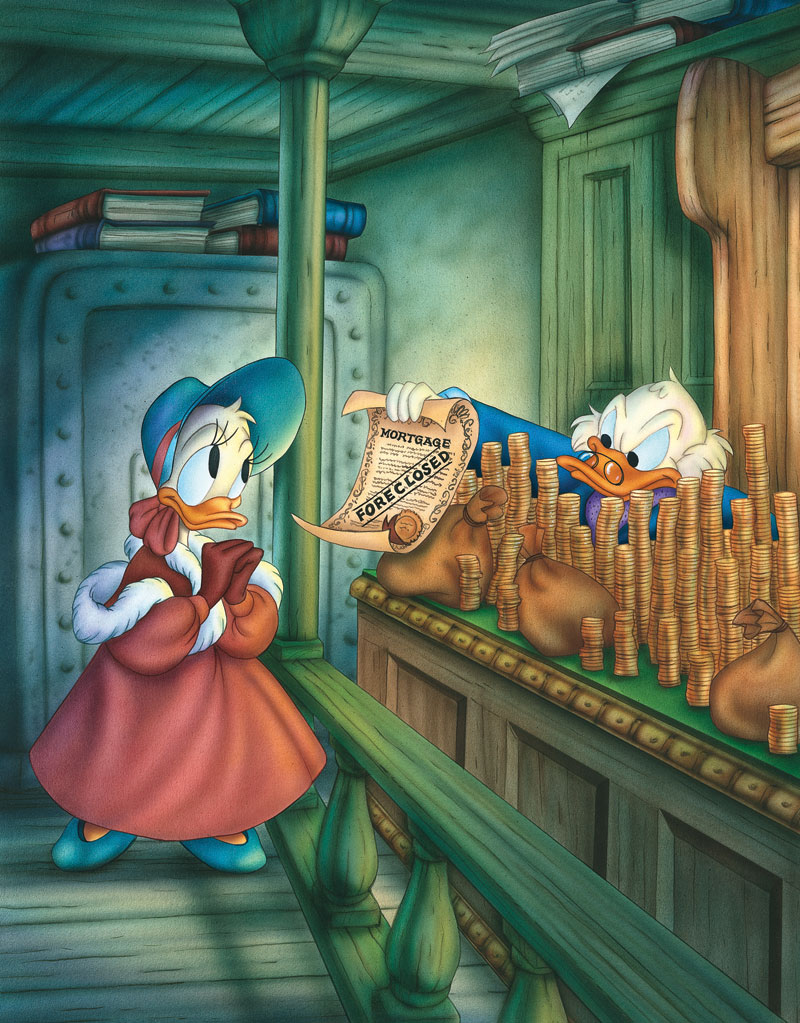