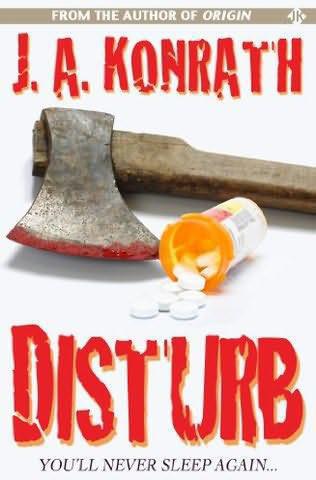 The world, it seems, does not possess even those of us who are adults completely, but only up to two thirds; one third of us is still quite unborn. Every time we wake in the morning, it is like a new birth.

Sleep is the only medicine that gives ease.

Excerpt from TRUCK STOP by Jack Kilborn and J.A. Konrath

Excerpt from DEAD ON by Robert W. Walker

David leaned back on the mattress, fingers laced behind his blond head. His overdeveloped biceps strained the fabric of his T-shirt sleeves. He flexed his pecs, and his chest trembled like a bull shaking off horseflies.

Manny muted the television, sighing loudly enough for David to hear him. This was a familiar dialog.

David grunted. He stared at the ceiling, imagining that this was a real apartment with people living above and below. But it wasn’t real; it was a cage, pure and simple. The fake scenery outside the window and the phone that only dialed out to one number made it even more ludicrous.

“I’d rather go back to prison than stay here.”

“You know that isn’t true. This is better for us, David. We can get through this. Look at all we’ve been through together.”

Manny was right. They’d been through hell. But the future only promised extra helpings, with no end in sight.

David clenched his teeth. The hate buzzed around in his head like a hornet’s nest, desperately trying to get out. He made his decision.

Manny turned away, shaking his head.

“Anyone can take a life, Manny. All you need is the proper motivation. What if I took that fire ax in the hallway and chopped up your little girlfriend? Does it have to come to that?”

“I hate it when you talk like this.” Manny stood up and went to the kitchenette. He got a glass of water, staring at David’s reflection in the framed Dali poster hanging above the sink. His stomach fluttered. David was older, bigger, and had a vein of mean running through him. A rich vein, that seemed to be growing. “I’m sure they’re listening.”

David laughed, a sound like a large dog growling.

“Of course they’re listening. We signed our privacy away. It’s lost, just like our freedom. Our minds are next.”

Manny finished the water and sat on the edge of the bed. He tried to sound soothing. “We’re a team, David. We have to see it though. That was the deal.”

“To hell with the deal.”

Manny thought about the question. He suppressed a chill.

“Well, I can’t. I have to get out. And if I leave, you know that a lot of people are going to die. I can’t control myself, Manny. It’s like a thirst.”

David pressed his hands to his face, as if he were trying to keep his skull from exploding.

“At least you’re the prize show dog. I’m the big mistake, kept in the shadows. Science gone wrong. Kill me.”

David reached out and grabbed Manny by the hand, imploring.

David’s grip tightened. Manny tried to pull away, but couldn’t. A shadow settled behind David’s face.

With a quick snap, David bent Manny’s pinkie backwards. The pain was instant and nauseating.

Manny yanked his hand free. His little finger jutted out at an odd angle. The blood leeched from his head, leaving his face ghost-white. He tried to stand, but his knees were spaghetti.

David’s eyes got big. He put a hand on Manny’s shoulder.

Manny managed to get to the bathroom. He ran cold water over his hand, but it didn’t numb the pain.

“I think it’s just dislocated. I can pop it back.”

He gently tugged Manny’s wrist away from the sink. Manny began to shake.

David got a good grip on the dislocated finger. Manny felt the bile rise.

For the longest moment, Manny was convinced that David wanted to twist it backwards even farther, wrench the finger until it came off. But David simply gave it a quick tug and the pinkie snapped back into place. He stared at Manny, eyebrows knitted.

“I’ll stick with it, Manny. For you. But promise me that if I hurt anyone else, you end it for me. I know you could do it. You’re not as squeaky clean as they think.”

The pain was subsiding, and Manny’s stomach began to settle.

“Sure. You do that. We have plenty of time.” David grinned. “And plenty of fingers.”

David left, and Manny locked the bathroom door. The situation was getting worse, and the mandatory shrink visits didn’t help at all. He thought about telling one of the research team, but that would ruin everything they’d worked so hard for.

Manny stared into the mirror, searching himself for an answer.

Maybe murder was the only alternative.

Manny looked down at his swollen finger and wondered if he could.

“W
hat would you give for an extra thirty years of life?”

The big man was no longer at the podium. He circulated among the tables, his grandiose voice having no need for a microphone. A neatly trimmed beard, the color of a black bear, extended along his jaw line and connected with a shock of matching wiry hair. Except for some busboys hustling empty plates, all the eyes in the banquet room, over a hundred sets, were on him.

“Think of it. More time to spend with your family. More time to get all the things done that need to get done. More time to enjoy life to the fullest. Time is money. Time is precious. But most of all, time is a resource, like oil or natural gas. How much is it worth to you?”

He paused, eyes twinkling. Dr. William May had seen this speech once before, but was no less impressed. Unlike other scientists Bill had met in his career, Dr. Nikos Stefanopolous had magnetism to match his brilliance. The barrel chested Greek could have hawked cooking utensils on late night TV with equal aplomb.