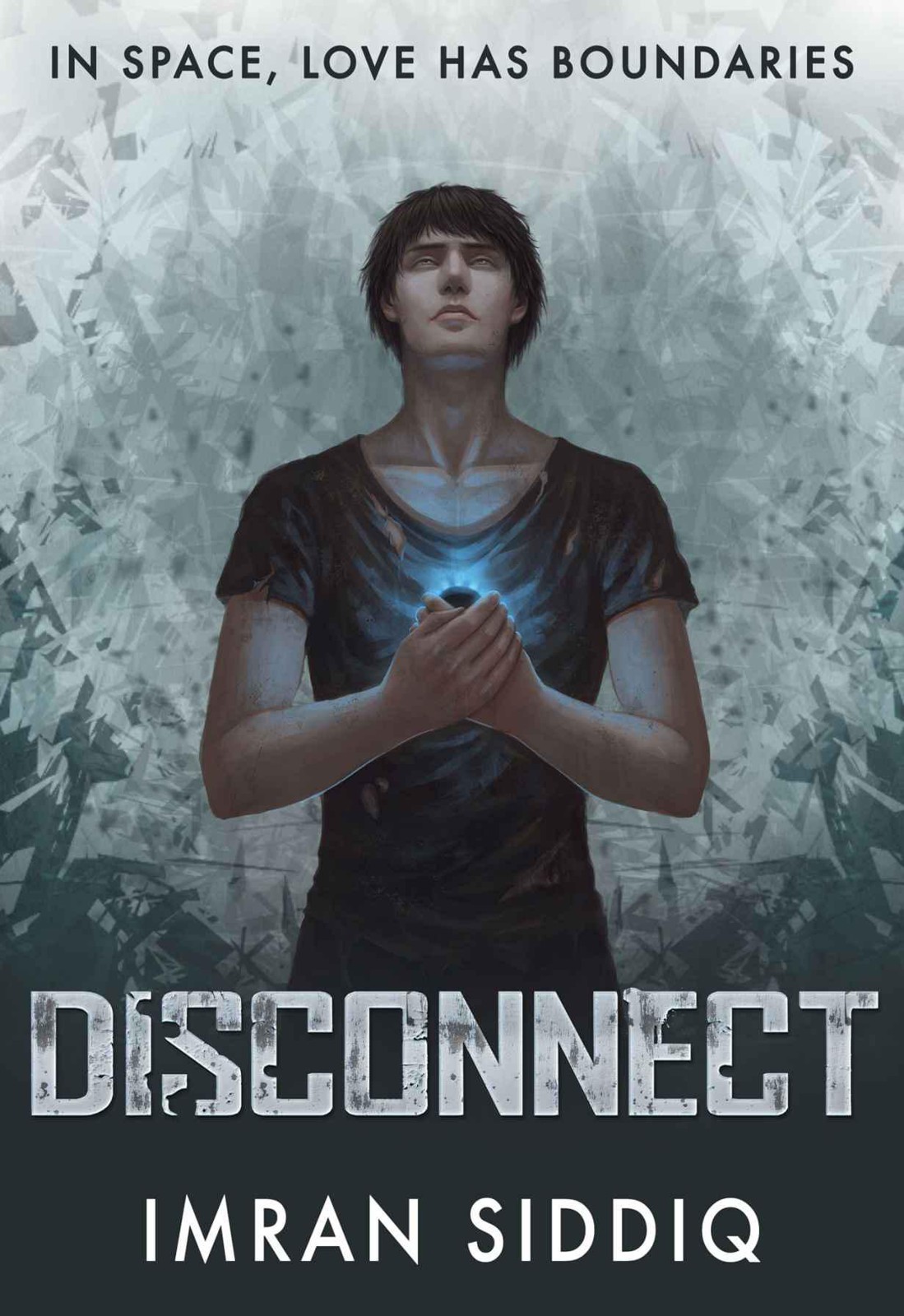 Book One of the Divided Worlds Trilogy

This ebook is licensed for your personal enjoyment only. This ebook may not be re-sold or given away to other people. If you would like to share this book with another person, please purchase an additional copy for each person. If you’re reading this book and did not purchase it, or it was not purchased for your use only, then please purchase your own copy. Thank you for respecting the hard work of this author.

This is a work of fiction. Names, characters, places and incidents either are products of the author’s imagination or are used fictitiously. Any resemblance to actual events or locales or persons, living or dead, is entirely coincidental and fictitious.

For our little angel

Zachary stopped at the
clunk
under his boot.

How had nobody seen the box? With a glance into the darkness of the Wastelands, he licked his chapped lips.

Taking the box, Zachary darted past heaps of tottering metallic sheets. So far today, he’d scavenged nothing that was worth shoving into the pockets of his knee-length coat. If there was one thing to beat today, it was the pride-crashing kick to the guts of returning empty-handed for a fourth day. As the shortest scavenger of the stall at five foot six, a barren run made him the easiest target for teasing.

The stall’s heckles from the day before still chilled him.
The quickest rat with the hunting skill of a slug.

But thoughts of leaving the vast Wastelands with only a handful of screws and two-inch nails drowned in his anticipation that the jingling in the box would be ratchets, fuses and battery cells.

Zachary sprinted along the ledge of the bay to an overhanging bank. Not even the sick rested amongst the rusty vehicles deserted here. Using his trusted titanium screwdriver, he teased off the knot of wires beneath the mesh. Why would anyone take trouble to wrap and then to discard this box?

Whatever
, thought Zachary freeing the last clasp of the lid. Inside there was a folded note, a silver Intercom-transmitter, and an orange-tinted bracelet.
Result!
Twiddling his long, brown hair, he scrutinised the box for hidden compartments within the padded interior. The smooth texture couldn’t have started life in Underworld, could it?

Locked away from light, Underworld was a murky pit in comparison to the rich nature of Overworld that few had seen, and finds such as these were rare here. Luck placed Zachary within easy access of the clutter that lay on the west side of Underworld, the Wastelands. Spending most of his day amongst the sewer pipes didn’t bother him for it was far better than the dull lanes of District Two. No day was the same amongst junk. Every gush from the pipes revealed a new surprise.

Nobody knew how thick the ceiling was or why its creation blocked Underworld from the world above. Often Zachary pondered what exactly sat above the ceiling. He guessed unlimited power, droids with abilities that dwarfed the functions of humans, and a life that didn’t require working in muck. Short hours. Free time.

An eerie chill climbed his spine at imagining the scattered giant steel support pillars dropping aside? Would Overworld add to the mess of Underworld? Could the two worlds of the
Galilei
Research Base co-exist? No chance.

What did it matter? Underworld’s builders had left it to rot.

Zachary squinted in the darkness at the unbroken chain links on the bracelet and the deep dent in its centre. Components of music-playing Harmon bracelets weren’t difficult to locate, though one as complete as this? He clicked his teeth thinking of when a working bracelet had last been handed to the stall. Longer than five years at least. There was a harsh rattle as he shook the bracelet. If he fixed this, it could be enough to save him another day of shame.

More than that, he could show his dad that scavenging wasn’t a deadbeat job by putting some good food on the table.

The Intercom-transmitter, a communication device he’d often see in the hands of a ruthless looter, felt light in his palm. If this find functioned – he held his breath – then mushrooms for supper would become a memory. Zachary squirmed. Adjusting to the slimy, vomit-wrenching taste of mushrooms that thrived in abundance was at the bottom of his to-do list.

He rubbed his back against the carcass of a vehicle, his heart thumping. Maybe the Master of the stall would let him look behind the curtain?

Zachary’s hazel eyes reflected off the Intercom’s shiny shell. He rubbed the recognition pad underneath, not sure what to expect. Dull lights clicked along the screen’s circular pattern. Blue tinted static formed in the air a foot above the Intercom.

“What in Europa!” Zachary swiped the image. Signs of energy were a signal to the greedy. If any of the gangs roaming the dry deluge saw this, they’d seize the Intercom and snap his skinny limbs apart.

Coat over the Intercom, Zachary sunk deeper into the bank. He paused before returning his thumb to the pad. The blue static burst out again, accompanied by a disturbing cackle. A human head with long hair formed in front of him. The image rotated, showing blurs where the eyes and mouth should have been. An incomplete android? Or an Overworlder?

Zachary’s curiosity peaked. He’d never seen an Overworlder before and it wasn’t like he had a choice in that matter.
Galilei’s
distinct division prevented any mixing. There was no doorway, window or ladder to allow sight or sound between the worlds. Yet, he held a gateway to one in his hand. Were Overworlders as perfectly skinned as he imagined them to be? Did they wash every day without scrounging for water under steam-filled pipes?

Zachary crammed the Intercom to his waist. A spark erupted in the centre of the device, and then it switched off. He gasped open-mouthed. Eyes closed, he bugged his memory to repeat her soft words. It was gone. Zachary rubbed the pad. Nothing. Inactive. Dead. Worthless. No – the Intercom could be salvaged. It could be worth… something.

His eyes narrowed at the unfolded note. “Initial surveillance confirms the location. Continue with Project Centurion.” There was nothing on the reverse.

The word
surveillance
bothered him. It was what scavengers said when watching a lucrative drop point in the Wastelands. Did the girl write the note? Was she after someone?

Zachary tapped the Intercom. It didn’t make sense for anybody to write on paper if they were going to place it with a messaging device, unless they knew the Intercom to be faulty.

He shrugged, putting all three items into his pocket. The box weighed little, but it was valuable. Hooking a wire from the box to an inner seam of his coat to aid its hidden transport, Zachary smirked. The mushrooms looked closer to being history.

After snaking around the vehicles, he jumped onto a protruding sewer pipe to reach the upper level. Whirring sounds halted him. Eastwards, embedded turbines spun clockwise like a volatile drill within the high ceiling.

A drop was coming. Normally, Zachary would’ve dashed over bust circuit boards to reach the drop point. Instead he watched a triangular section of the ceiling, secured by hydraulic arms, eject downwards. Wind spurted ahead of blazing light before rock-like objects rushed out, followed by a rainstorm of particles in pursuit. Discarded rubbish of Overworld had entered his world.

Zachary’s eyes tightened upon other Underworlders swarming to the falling treasure. It was a good one-minute run away, and by the time they reached it, the Wasteland gangs would have fought one another for the glory. If the wired-box had been part of that drop, there’d be steel cutting through bodies to get it. He shivered with thoughts of the carnage if they’d found the Intercom.

Emitters within the ceiling dimmed, ending the artificial day. Turning on his heels, Zachary took the southern route to the bartering camps of District Two.

He manoeuvred to the steep ladder against the gigantic heated pipe. Halfway up on the forty-fifth rung, Zachary gazed over the irregular horizon of the Wastelands scanning for a girl running between the swamps, searching for her box. Who was she?

On reaching the platforms jutting from a mountain of metal, Zachary moved into the bartering camp, avoiding locking eyes with the near-naked hut occupiers begging with their scrawny fingers. Drooped faces, similar in every way, shared cracked bowls of sludge. He considered them to be a clever scheme, detracting from the pick-pocketers groping his coat.

If anybody here owned an Intercom, they wouldn’t place it in a box, even for safekeeping. No – they’d solder it to their belts and some to their piercings. That wired-box had to have come from Overworld.

Zachary licked his lips. The Intercom wasn’t totally broken; some life inside remained, and that gave it a chance to be repaired. There was someone who could repair it, but he’d have to be quick. If Zachary’s dad found out that he’d messed around with a device rather than exchanging it for money, then he’d be in for a kicking.

Recessed between the huts of the rat seller and the cockroach grinder sat Zachary’s employer’s stall. A bullish man nodded, allowing him entry into the candlelit foyer. He spoke little to the other scavengers lining the room’s edge. Either their goods had been delivered, or they had nothing spectacular to show. He continued, descending to the symmetrically carved area underground.

At the front of a corridor, a middle-aged man mumbled at his desk as he scribbled into a paperbound book. Shekhar peeked over cracked spectacles, showing no amusement at Zachary’s tentative loosening of his fingers.

The Harmon bracelet glittered in the candlelight.

Shekhar bit the lid off his red pen. “He already has many.”

“This works.” Zachary yanked the bracelet away from the attempted snatch.

“A working Harmon, Mister Connor? Why would anybody throw it away?”

Zachary gulped. The stall’s beady-eyed Secretary wasn’t a man to irritate. “Why does anyone throw away anything?”

Shekhar murmured. Pushing his spectacles up onto the bridge of his nose, he led Zachary to the wooden door with depictions of men carrying building blocks and guiding barrows. Shekhar knocked three times.

Zachary exhaled upon entry into the Master of the stall’s five-cornered room. Air swept from Shekhar’s slam of the door didn’t detract from the heart thumps Zachary felt. He was seconds away from the padded curtain that hung behind the Master’s chair. Desperation at wanting to peek behind the curtain accompanied the slide of his heel. No – wait, there wasn’t time for the curtain, no matter how long it’d been since he’d gazed beyond it. Priority stormed his mind. Get home. Repair the Intercom.

Cobwebs pinned inside picture frames decorated the walls above stacked items and metallic gadgetry. Dust floated between the generous glows of the corner-mounted tubes of energy. Zachary passed the human skeleton standing there with sharpened pencils crammed into the holes and notches of its skull. It was a symbol of man stripped of protection whose purpose was to hold objects of use. Maybe that was the Master’s interpretation of
Galilei
; Underworld lived as the skeleton holding up Overworld.

A strange smell hooked Zachary’s nostrils. Of all the sewers he’d stepped in, this was by far the most rancid. Had something died here?

He drew near to the long, polished table in the centre of the room where Master Salvador “Biro” Burton sat observing him. The rear curtain skewered in place by copper rods tempted a grin.

Then, the thump of Zachary’s heart tightened.