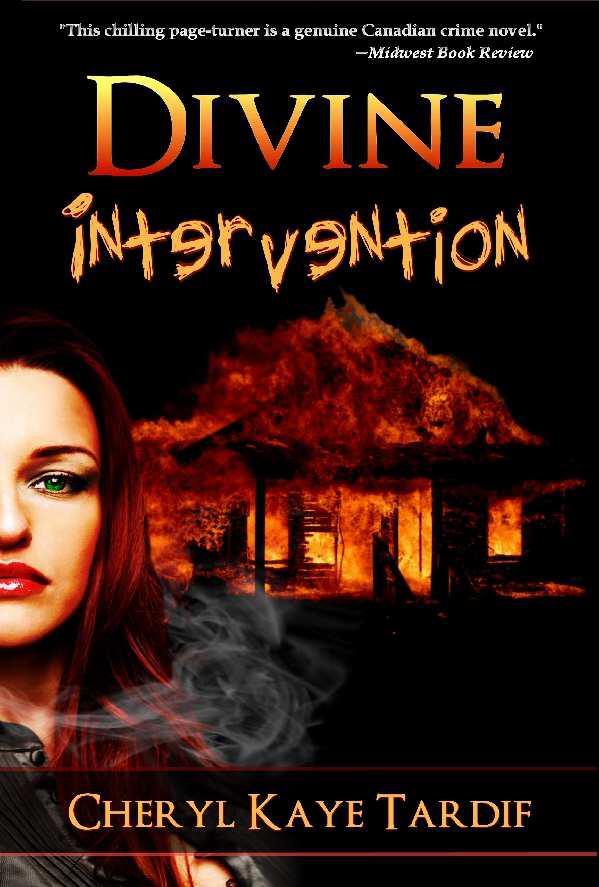 THIS IS THE SAME STORY TEXT AS THE 2004 EDITION. ONLY THE FRONT & BACK MATTER HAS CHANGED, AS WELL AS THE COVER and ISBN.

No part of this publication may be reproduced, stored in a retrieval system, or transmitted, in any form or by any means, electronic, mechanical, photocopying, recording, or otherwise, without prior written permission from the author.

This is a work of fiction. Names, characters, places and incidents either are the product of the author's imagination or are used fictitiously. And any resemblance to actual persons, living, dead (or in any other form), business establishments, events, or locales is entirely coincidental.

This book is dedicated to the courageous, persistent firefighters who fought one of British Columbia's largest fires―the Okanagan Mountain forest fire in 2003. These men and women are the heroes to those whose homes were saved and the heroes to those who lost everything―except hope. Firefighters' lives are always on the line and we pray they remain vigilant and fireproof.

We thank you and salute you!

It is also dedicated to my husband, Marc, who was a volunteer firefighter in BC for a couple of years. He always 'lights my fire'!
Thank you for encouraging me to be who I am.

Special thanks to my good friend, Carolyn Shinbine―an
RN
at University of Alberta Hospital―
for her medical expertise, and for giving me clarity.
Your input makes Jasi's world a realistic one.

To my editors, Mary, Francine and Marc, thank you for keeping the story tight.
Your hard work is much appreciated!

Thanks also to Kelly Komm for allowing me to borrow "Eric Jefferson".
I may not be done with him yet!

And thanks to my family for all their support. You help me make my dreams come true.

Any mistakes, or impossibilities, are my own.

There is surely a piece of divinity in us,

something that was before the elements,

and owes no homage unto the sun.

Intervention – to occur or lie between two things

It always began with the dead girl in her closet.

Every night when little Jasmine opened that closet door she expected to see lovely dresses and hangers―not a child her age strung up by a pink skipping rope, her body dangling above the floor…unmoving.

The dead girl had long blond hair. Her blue eyes stared blindly and were surrounded by large black circles. Her mouth hung open in a soundless scream. The pink rope was tied tightly around her neck, a thick pink necklace of death. A purplish-black bruise was visible and ugly.

The most unusual thing about the girl, other than the fact that she was swinging from a rope in Jasmine's closet, was that her skin and clothing were scorched.

When the girl's lifeless body swayed gently from a sudden breeze Jasmine let loose a cry of terror and raced down the stairs, searching anxiously for her parents.

Her throat was constricted and dry.

Then she screamed. "Mommy, I need you! Help me!"

In the lower hallway, the shadows quickly surrounded her.

Then she saw them.

Red eyes flashing angrily at the end of the hall.

Jasmine took a hesitant step backward. She tried to run but her feet would not cooperate. Her small body began to shake while the eyes followed her.

Glancing over her shoulder, she noticed a listless form moving toward her, arms outstretched―pleading.

The girl from the closet wasn't dead anymore.

The girl's mouth yawned and a horrendous shriek emerged.

Agent Jasi McLellan awoke from her nightmare screaming and drenched in sweat. Irritated by a piercing sound, she turned her pounding head and glanced at the wall beside her.

A technologically advanced video-screened wall, or
vid-wall
, had recently been added to her daunting security system. The wall was divided into four monitors―each coded for different activities.

She was rewarded with silence.

Jasi eyed the clock.
5:30 in the goddamn morning.
Who the hell would be calling her this early on her day off?

Glaring words flashed across the monitor followed by a voice, deep and urgent. "
Jasi, we need you! Ben."

She was suddenly wide awake.

When the system connected with Ben's data-communicator, she said, "Give me fifteen minutes. End message."

She glanced at the words on the screen and realized her
holiday
was over. She wondered for a moment what was so important that Ben had to interrupt her downtime. With two days left, she had hoped to catch up on some much-needed rest.

Crawling from beneath the sweat-soaked sheets, she crouched on the edge of the bed and reached for her portable data-com.

She checked the calendar.

A black
X
was
scribbled over the date.

Today was her twenty-sixth birthday.

She pushed herself off her bed. In the dark, her toe connected sharply with the corner of the dresser and she let out a startled yelp.

Her
Home Security & Environmental Control System
immediately raised the lighting to a soft muted glow. Some days she was very thankful she had allowed Ben to install
H-SECS
in her new apartment. Of course, on the days when she couldn't remember a command or the security code to her weapons safe, Ben would get an earful.

Limping to the bathroom, Jasi shook her head
.

Could this day possibly get any worse? Maybe I should go back to bed…wake up tomorrow.

She hugged her arms close to her chest and stepped into the ensuite bathroom. Parking her butt on the toilet, she stared at her throbbing toe. Scowling, she stood up, leaned tiredly against the sink and examined her reflection.

That's when she remembered her recurring nightmare.

"Why can't you leave me alone?" she whispered to a dead girl who wasn't there.

Frowning at her puffy, shadowed green eyes, Jasi splashed cool water on her face and rested her elbows on the edge of the sink. She traced a finger over the small scar that ran down the left side of her chin. It was barely noticeable, except to her.

Spurring herself into action, she cast a self-deprecating glance at her hazy image and then headed for the shower.

"Shower on, massage, 110 degrees," she commanded as she removed her panties and nightshirt. "Radio on, volume 7."

Music from her favorite rock station pounded in through the ceiling speakers as she stumbled into the large shower stall. Stretching hesitantly, she relaxed her tense muscles and breathed a sigh of relief when the steamy water sent thoughts of a dead girl swirling down the drain.

Jasi lathered her long auburn hair and stood under the spray, allowing the water to massage her scalp. Grimacing, she slid a wide-toothed comb through the tangled mess of wavy locks. Her hair had a mind of its own. More than once Jasi had threatened to chop it off but she was afraid she'd end up with a 'fro.

Couldn't have that. No one would take her seriously.

Her fifteen minutes were up.

Cursing under her breath, she spit toothpaste into the sink, barely missing the soap dispenser.

"Hey there, sunshine!" a male voice boomed. "You miss us?" Benjamin Roberts, her friend and partner, didn't wait for a response. "Divine has issued a Command Meet. He says he's sorry to cut your downtime short but we need you."

His voice followed Jasi as she returned to her bedroom and ordered the lights on full.

She sighed loudly. "It's not like I have anything better to do today. Like relax, go to a movie, or hook up with a handsome stranger for a night of passion."

She eyed the closet nervously, then whipped the door open and stepped back, unsure of what or who might emerge.

No one was there.

"Hey,
am
I interrupting something?"

She grabbed some clothes, slamming the door quickly.

Stepping into a pair of casual slacks and a light blouse, she waited for her partner's answer.

"You still in the shower, Jasi? Maybe you should put up the vid-wall." She heard him snicker.

Jasi frowned, and strapped on a shoulder harness.

She hadn't been there in years. Not since the disastrous Okanagan Mountain forest fires of 2003. Now, nine years later, she would be returning. She'd have to take some precautions, prepare herself.

"Sorry, Jasi. I know you're still officially on downtime, but this one is bad. They found a link to another fire. Two victims―a mother and child in Victoria. Unsolved."

There was a long silence.

She heard a soft chuckle on the other end. "By the way, Jasi, Happy Birthday."

"How'd they link that one to the doctor?" she asked, ignoring the reference to her birthday.

When he told her what the crime scene investigators had found at the scene, Jasi grabbed her 9-millimeter Beretta, checked the safety and jammed it into the holster. Then she dashed from the apartment―a shadow hot on her heels.

A cab dropped her off at an isolated address in the West End. On the roof of a seedy-looking warehouse, a helicopter waited, its engine camouflaged by the busy drone of the streets below. Vancouver was a city in perpetual motion. A city that never slept.