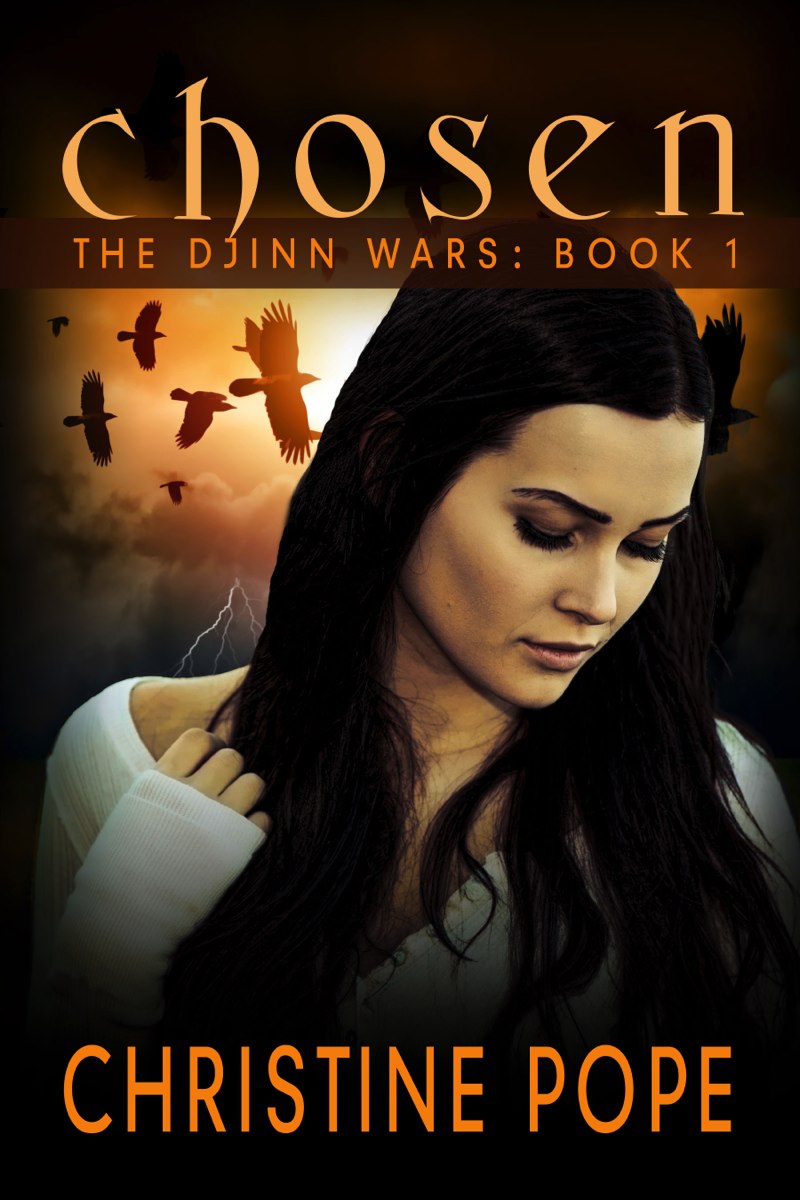 Book 1 of the Djinn Wars

This is a work of fiction. Names, characters, places, and incidents are either the product of the author’s imagination or are used fictitiously. Any resemblance to actual events, places, organizations, or persons, whether living or dead, is entirely coincidental.

All rights reserved. No part of this book may be reproduced in any form or by any electronic or mechanical means, including information storage and retrieval systems — except in the case of brief quotations embodied in critical articles or reviews — without permission in writing from its publisher, Dark Valentine Press.

Please contact the author through the form on her website at
www.christinepope.com
if you experience any formatting or readability issues with this book.

To all those who have been left behind

The Dying began on my twenty-fourth birthday. Even now I truly believe that was nothing more than a sad coincidence, but if nothing else, the synchronicity helps me to remember when the end began. September twenty-sixth. There was a certain crispness in the air, a bite after the sun went down that told me fall was on the way, and winter soon to follow. We didn’t get as cold in Albuquerque as they did in Santa Fe, but we could feel the shift in the seasons even so.

I was out with friends doing tequila shots at Zacatecas when the first reports about a strange illness in New York showed up on the evening news. Maybe I caught a glimpse on the TV in the bar, but I don’t think so. To be blunt, I was pretty wasted. Getting plowed like that wasn’t in my usual repertoire, but my friend Tori kept ordering round and after round, and since I wasn’t driving, I didn’t try too hard to stop her. Maybe in the back of my mind I was thinking that this year I was twenty-four, and twenty-five would come sliding along soon enough, and I might as well party with abandon while I still could. Sooner or later I’d have to be a good, responsible adult, but not on my birthday.

The next day was a Saturday. No school or work for me; I was getting my master’s in English, mostly because I couldn’t really figure out what else to do with myself, and staying in college for as long as possible seemed pretty attractive compared to what awaited me in the real world. Since I’d been lucky enough to snag a T.A. position teaching lower-division English classes, I didn’t have to worry about dragging my sorry hung-over ass into work, either. I had until Monday to recover.

Around noon I finally wandered into the kitchen, after taking a shower so long the hot water began to run out. Good thing we had a separate water heater for the little apartment over the garage where I lived, or I probably would have heard about it from my mother. All right, so I was still living at home, but the apartment gave me at least the illusion of independence, if not the real thing. It also allowed me to pay much lower rent than I would have otherwise. My parents didn’t want to charge me anything — well, not my mother, anyway — but I’d insisted. It was a pittance, but it did cover the utilities and helped give them some extra wiggle room.

My mother had the little white TV on the kitchen counter turned on and was frowning as she watched some cable news talking head go on about a new illness that had begun appearing in New York and Los Angeles the day before. Reports were also coming in from up and down both coasts about this unnamed disease, which left its victims hospitalized with extremely high fevers.

“More Ebola?” I asked, blinking against the too-bright light in the kitchen and making a beeline for the fridge, where my mother always kept a pitcher of iced tea, even in the dead of winter.

“No, Jessica,” she said, that little pucker of worry still showing between her brows. “Something else. They don’t know what it is.”

“Mmm.” In that moment, I was far more concerned with getting some caffeine into my bloodstream ASAP than worrying about the disease
du jour
. Those sorts of things never seemed to affect us here in Albuquerque. I wouldn’t say we were exactly the city that America forgot, but if it weren’t for
Breaking Bad
, I doubted most people would have spared my hometown a second thought.

From the side-eye my mother was giving me as I downed the iced tea, I guessed that the makeup I’d carefully applied earlier wasn’t doing much to hide the evidence that I’d had, as they say, a gaudy night. But because I hadn’t been driving and was more or less ambulatory this morning, she seemed to be giving me a pass.

“Dad have a shift today?” I inquired, after refilling my glass of iced tea and taking a few more gulps. Since I felt fortified enough to eat at that point, I popped the pitcher of tea back into the fridge and got a package of English muffins out of the breadbox.

“Yes.” She didn’t exactly sigh, but I could tell she wasn’t thrilled, either.

My father was an officer with the Albuquerque police department. Still a beat cop after twenty-five years, too. He never had any interest in riding a desk, liked to be out on the streets. How my mother lived with it, day after day, I didn’t know. My brother and I generally took our father’s occupation in stride, since it had always been a part of our lives. But I knew my father had gone through the academy after he and my mother got married, and so it hadn’t been an irretrievable fact of life when they were starting out as a couple. I know she wished he was more interested in becoming a detective so he wouldn’t be so much in harm’s way every day. That wasn’t my father, though — even at fifty-two, he was lean and fit, and could probably put guys half his age through a wall if necessary.

At the time, the department was chronically short-handed, so my father picked up a lot of extra shifts. My mother never protested, since she knew he was doing it for us, putting more money in the bank, but she couldn’t help worrying. Sometimes I wondered if my father knew exactly how stressed she was every time he left for work. I didn’t think that would’ve stopped him, though, because as much as he loved her, he also loved his job and thought he was doing some genuine good.

“Well, at least it’s a daytime shift,” I told her, then put the two halves of the English muffin I’d just broken apart into the toaster oven.

“I know.” The worry line was still there, and it seemed to deepen as she returned her attention to the TV. The talking heads had been replaced by a doctor, a woman in her late forties who probably would have been pretty if she hadn’t look so tired.

“The illness manifests as a very high fever, spiking as high as 106 degrees. We’re having difficulty controlling the fever, even with analgesics and ice packs.” She paused, pushing a strand of dishwater-blonde hair back behind her ear. Obviously, she hadn’t bothered to primp before going to make her statement in front of the cameras. “No other symptoms have been observed at this point. If you or someone in your family comes down with a fever above 103, please call your doctor or go to the local emergency room.”

The camera cut to the reporter interviewing the doctor. “Dr. Leviton, any word on where this illness has come from? Is it connected to the doctors returning from West Africa?”

“No,” Dr. Leviton replied at once, looking almost annoyed. “None of the victims brought in to Mount Sinai or any of the other hospitals in the city appear to have any connection. Most of them haven’t even left New York during the past few months. Of those who have traveled, they’ve returned home from destinations as diverse as Tahiti, Paris, and Australia. Again, there doesn’t seem to be any connection.”

At that moment, a nurse came up and whispered in the doctor’s ear. Her expression shifted from annoyance to outright worry before she said quickly, “I’m sorry — a patient needs me. That’s all I can tell you right now.” And she turned away from the cameras and began hurrying down the hallway almost at a run, the nurse right behind her.

The French Lieutenant's Woman - John Fowles by John Fowles
Sara Lost and Found by Virginia Castleman
Miracle on the 17th Green by James Patterson, Peter de Jonge
The Book Without Words by Avi
A Kiss of Adventure by Catherine Palmer
I Can't Complain by Elinor Lipman
Communion: A True Story by Whitley Strieber
From Fake to Forever by Jennifer Shirk
Nexus by Ophelia Bell
Love and Fury by Richard Hoffman
Our partner