Doctor Who: The Ice Warriors 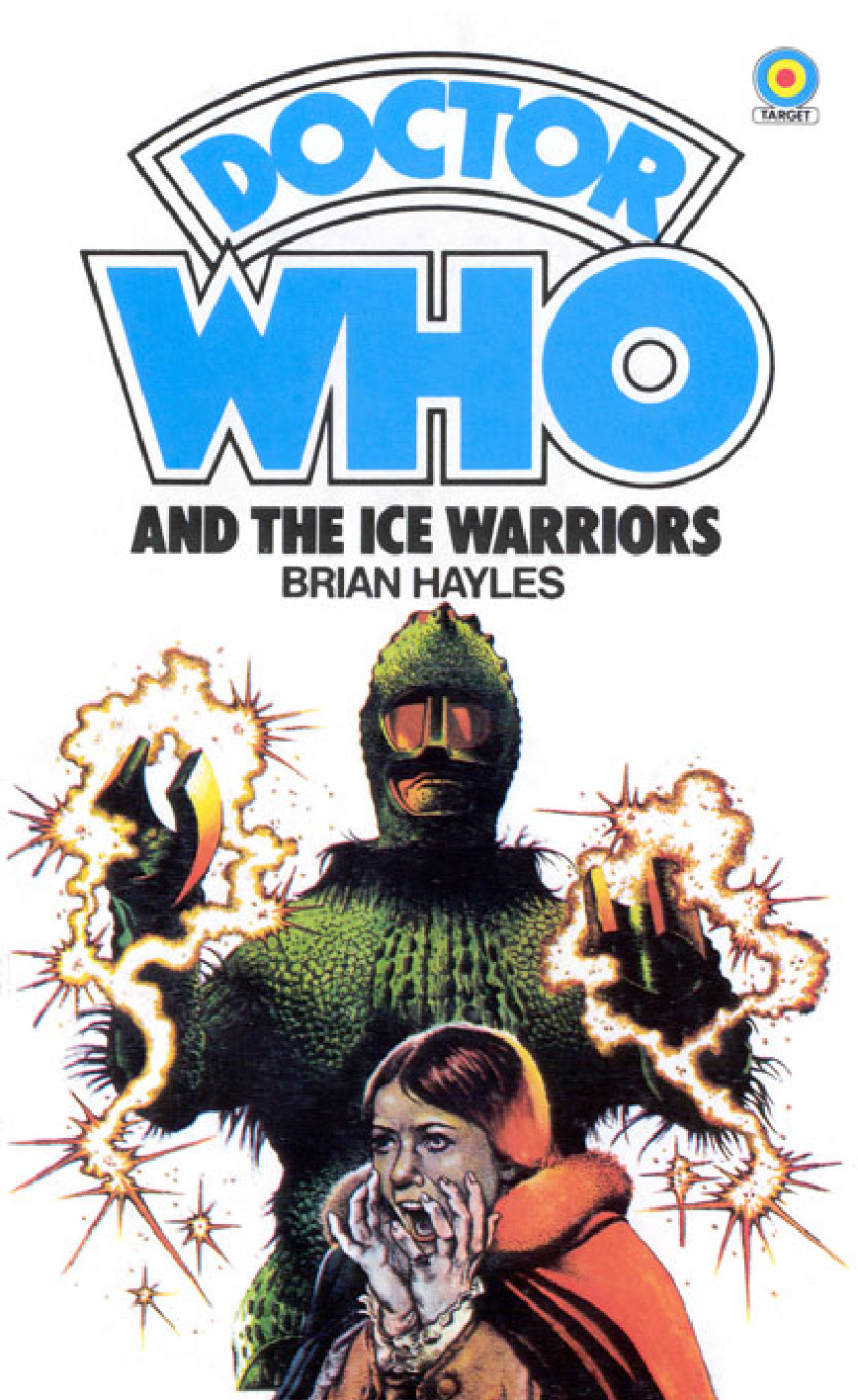 The world is held in the grip of a second Ice Age, and
faces total destruction from the rapidly advancing
glaciers.

DOCTOR WHO, with Victoria and Jamie, lands at a top
scientific base in England, where they have just unearthed
an ancient ICE WARRIOR. Aliens from Mars, preserved in
the ice for centuries and now revitalised, the Ice Warriors
feel ready to take over...

Can the Doctor overcome these warlike Martians and halt
the relentless approach of the ice glaciers...?

by the Paperback Division of W. H. Allen & Co. Ltd.

CONTENTS
1 Battle Against the Glaciers

3 Creature from the Red Planet

4 Back from the Dead

6 Under the Moving Mountain

10 On the Brink of Destruction!

Battle Against the Glaciers

‘
Stand by all personnel! Base evacuation procedure, phase one.

The urgent, metallic voice of the computer cut across the quiet bustle of the Brittanicus Base Ioniser Operations Unit. Although the monitoring technicians continued to work at their places on the central control desk, the stand-by crews moved briskly to their assembly stations, ready for routine evacuation drill.

As the voice clattered on, Jan Garrett hurried in the direction of the Ioniser Control room. She didn’t need a lecture from ECCO—she was all too well aware of the dangers. If the Ioniser ever got completely out of control, it would mean total disaster. Not only would the entire unit be wiped out, but this area of southern Brittanicus would be plunged into a state of radiation half-life for the next five hundred years. And without the defensive barrier of the Ioniser’s heat shield, the whole island would eventually become uninhabitable, locked in the grip of a new Ice Age.

But the computer, as ever, had given timely warning of trouble ahead. With ECCO to guide them, they could not fail to hold their own.

Phase Two, amber alert. All unauthorised personnel to be located and
documented for departure.
’

Jan fought her way through the orderly turmoil of the Grand Hall, and entered what had once been the library of the Georgian mansion that now housed the Brittanicus Base Unit. It was in this elegant room, its paintings and its leather-bound books still preserved in their original twentieth-century state, that the compact but delicate Ioniser was housed in regal isolation, its power lines linked to the small but immensely powerful reactor unit contained in the cellar below. One glance at the machine was enough: all the tell-tale needles were sinking rapidly through amber into the red danger zones. Jan’s hands began to operate the relevant controls, damping, adjusting, increasing; desperately trying to achieve stability.

Suddenly, the tension that gripped her was sharply increased by the sound of a man’s voice at her shoulder. She turned. Leader Clent’s face was dark with anger.

‘Why has this been allowed to happen?’ he snapped.

‘The whole power series is barely above danger level!’

As if in response to his angry words, the needles flickered upward and held, trembling on the verge of breaking out of the amber zone. But Jan knew that the improvement could only be temporary. The flaw was basic and, as yet, its cause unknown.

‘
Hold on Amber Two,
’ rang out the distant warning system. ‘
Prepare to return to Phase One stand-by.
’

‘That’s better, Miss Garrett.’ Clent’s anger was now in check, and his eyes, although stern, held and calmed her. It was his strength of personality that gave backbone to this unit, many of whom had despaired of the success of a mission that had seemed doomed from the start. She was young, intelligent, well-trained; with Clent to guide her, she would eventually come to terms with the promotion he had forced upon her when the treacherous Penley...

‘There was a pulse stoppage,’ she blurted out, breaking his train of thoughts.

The nearly inaudible tone of the Ioniser was beginning to falter—as though the machine was sick. Clent looked grim.

A pulse stoppage meant there was a danger of feed-back to the reactor: the resulting explosion would wipe the Unit from the face of the Earth. But what could be causing it?

Jan’s face tightened. She was close to panic.

‘I’m doing all I can to boost the power impulse—’

‘It can’t be allowed to fall any lower!’ grated Clent, studying the oscillator dials fiercely.

‘We still have time to evacuate,’ she muttered desperately.

‘We will
not
evacuate!’ he insisted. ‘We’ve beaten its ridiculous tantrums before.’

As they watched, the needles began to sag ominously close to the red sector again. Miss Garrett’s face grew pale with alarm. ‘It’s falling back again!’

‘Hold it steady!’ ordered Clent. ‘You must!’

Brushing Miss Garrett aside, Clent’s hands moved to the controls to make the necessary adjustments.

‘Then we’ll switch the stabilising circuits to computer control.’

Jan watched helplessly as Clent fought to retain control of the machine.

‘It’s still not holding...’ she whispered.

Clent was not giving up that easily. ‘All circuits, woman—
all
circuits! Don’t you understand?’

He snapped home a sequence of switches. Miss Garrett flashed a look of despair towards the dials showing the energy flow from the reactor. The readings were jumping wildly. She clutched Clent’s arm. ‘The feed-back...’

‘Not enough power for that...’ clipped the Leader. The scale readings were slowing at last. Clent smiled triumphantly.

‘Still just outside the danger zone. We should be able to hold it there...’

He turned to Miss Garrett for agreement. She shook her head without speaking. They both knew the bitter truth. In a matter of days—hours even—the Ioniser would be in a state of crisis again. But Leader Clent refused to admit defeat

‘Well at least it gives us time!’ he insisted irritably, then moved to return to his personal office. He stopped, as if remembering something, and turned back. ‘And while you’ve got the chance, call in Arden—I want him back at Base immediately!’

A geological map of the island which had once been called Britain covered one wall of the Grand Hall of Brittanicus Base. The line of electronic pin-point markers which divided the island horizontally in two seemed, at first glance, to be motionless; but they were in fact moving very slowly from north to south. Each pin-point of light represented a seismic probe set into the face of the river of ice that was threatening to engulf the island.

Brittanicus Base, the last, hastily-organised outpost of defence against the New Ice Age, was plotting the movement of the glaciers which, minute by minute,threatened to engulf it...

But the sophisticated wall chart could not reveal the bitter Polar conditions that existed outside the Base on the Cotswold hills.

Those hills and valleys which had remained free of the ice were now unrecognisable beneath their thick mantle of windswept snow. At its best the Ioniser defence could only hold back the ice; any attempt to reduce the snowy wastes would have meant disastrous flooding of the southern lowlands.

The weird landscape—a nightmare of snow and ice which had been driven, part-melted, and had then refrozen into bizarre grottoes and sculpted caverns—looked as bleak and unwelcoming as the wildest reaches of the Antarctic. It was impossible to imagine that this ice desert had once been green fields and gently rolling hills. Even the Scavengers—

those grimly determined natives who had refused to emigrate to the more temperate climate of the equator—had fled from the hills and set up their shanty-town communes in the lowlands bordering the south coast. Only occasional fanatics determined to die amidst the snow rather than retreat, and scientists dedicated to the last-ditch Ioniser programme, could still be found on these snowswept ridges and escarpments.

And no one travelled alone. Who would willingly run the risk of falling victim to wolves or polar bears?

But there were always jobs to be done, and Arden—once a keen archaeologist, and now the Base’s geologist—had a particularly important one at present: that of replacing a faulty seismic probe in the ice.

The weather conditions—fine and clear—had favoured the expedition so far. But now Arden was wondering, as he glanced up towards the towering glacier face, where it would be safe to insert the pencil-slim seismic probe. The first attempt had resulted in a massive section of the ice face fracturing and falling away. But it had revealed an ideal spot for a probe: a smooth face in a relatively sheltered position, and one which allowed easy access for the sled which carried the equipment. Arden turned his goggled and hooded face towards his two companions, Walters and Davis, and beckoned them to him.

‘Walters,’ he shouted against the low whine of the wind,

Walters, the armed member of the party, helped Davis, the seismology technician, to bring his drilling gear to the site indicated by Arden, who was already unwrapping and checking the slim seismic probe. While Davis assembled his pistol-shaped drill and connected it to the portable power pack, Walters moved to Arden’s side. With a nod of his head, Arden indicated the area he had chosen.

‘Clear away any loose ice, will you, Walters?’ he asked.

‘Sir,’ acknowledged the burly security sergeant, then turned towards the ice face, and began to clear it in preparation for the drilling. Suddenly, he turned round.

Arden hurried forward. Walters was desperately rubbing the already smooth surface of the ice with his heavy glove.

‘I’ll swear there’s something inside the ice, sir. Look!’