Read Doctor Who: The Trial of a Time Lord : The Ultimate Foe Online

Doctor Who: The Trial of a Time Lord : The Ultimate Foe 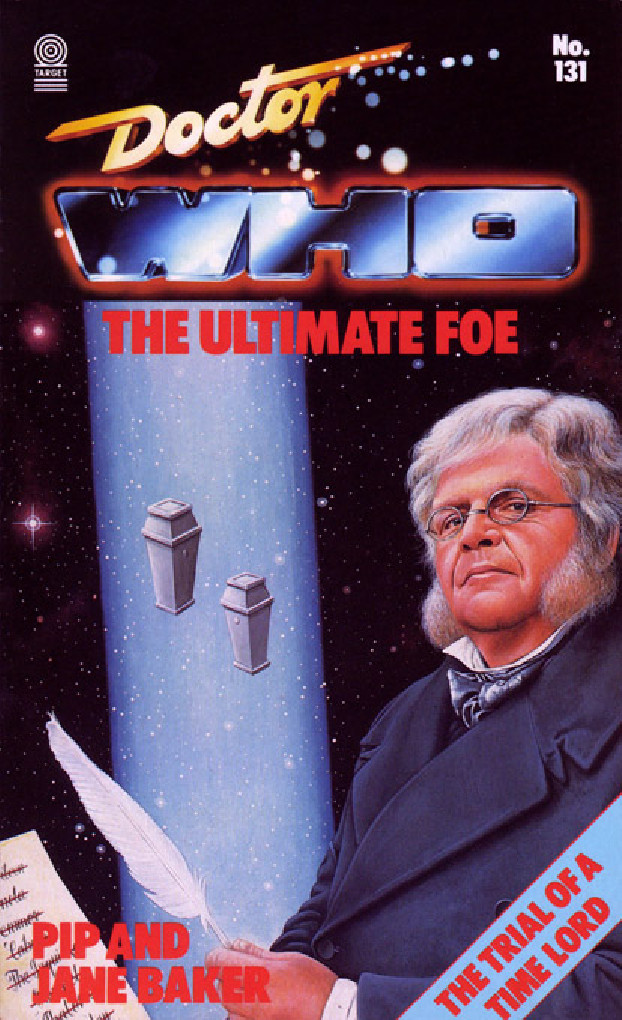 Snatched out of time and place and brought before the Time Lords of Gallifrey, the Doctor is on trial for his life.

While the Doctor asserts that the evidence of the Matrix, the repository of all Time Lord knowledge, has been tampered with, the mysterious and vengeful prosecuting council, the Valeyard, is confident that the Doctor will be sentenced to death.

In a dramatic intervention the Valeyard’s true identity is revealed but he escapes from the Courtroom into the Matrix, and it is into this nightmare world that the Doctor must follow –

THE TRIAL OF A TIME

based on the BBC television series by Robert Holmes and Pip and Jane Baker by arrangement with BBC Books, a division of BBC Enterprises Ltd

PIP AND JANE BAKER
Number 131 in the

by the Paperback Division of

The BBC producer of
The Ultimate Foe
was John Nathan-Turner

The director was Chris Clough

The role of the Doctor was played by Colin Baker Printed and bound in Great Britain by Anchor Brendon Ltd, Tiptree, Essex

1 The Key of Rassilon

11 Out of the Frying Pan

14 Off With His Head

21 The Price of Vanity

‘The charge must now be genocide...’

The Doctor’s face blanched, contrasting with his colourful patchwork coat. Snatched out of Time to stand trial for a crime of meddling in the affairs of other societies was traumatic enough, but the new charge echoing around the Court carried with it a greater penalty.

When a Time Lord is brought before the bar of justice, it is to no ordinary tribunal that he is transported. But then, as a member of the most remarkable species in Creation, this is only to be expected.

Plucked out of Time, the accused is incarcerated in a beam of turbulence which lances through the vast reaches of the four-dimensional Universe, to penetrate a unique dimension where all the processes of existence hitherto experienced are suspended.

Hovering in this singular vacuum is the venue for the Trial: a vast, incredible Space Station. Constructed like a baroque cathedral with dozens of thrusting spires and straddled with porticoes, the gargantuan hulk is embellished with a rococo scroll glorifying the achievements of the Time Lords.

In acknowledgment of the gravity of the proceedings a perpetual electric storm of Wagnerian magnitude leaps and dances with unabated fury.

This was the dramatic setting into which the Doctor had been pitched.

From the prisoner’s rostrum, he watched events unfolding on the giant Matrix screen that dominated the Court. The Matrix contained the memories of all the Time Lords, and from there the black-garbed prosecutor, the Valeyard, had extracted two cases to present in evidence against the Doctor: interference on Ravolox, and aiding the brain transference travesty planned by the gruesome Sil.

Neither case caused him particular concern because of the strong submission he intended to offer in his own defence: the tale of the terrifying Vervoids; those plantoid creatures who had infested the intergalactic liner Hyperion III. Only his resourcefulness prevented the homicidal monsters from reaching Earth. His intervention saved the human race.

Having concluded his evidence, he awaited the Inquisitor’s declaration of exoneration.

It had been the Valeyard who spoke. ‘Every Vervoid was destroyed by your ingenious ploy?’

But the Doctor had realised where the vengeful prosecutor was leading. ‘My Lady,’ he said to the white-gowned Inquisitor. ‘Had even a leaf survived and fallen on fertile soil, a Vervoid would have grown.’

No murmur of understanding came from the jury of his peers, the ancient Time Lords lining the rows of seats in the austere Court.

‘The beings on planet Earth would have been eliminated!’ he affirmed desperately.

The triumphant Valeyard had his victim by the tail and he intended to twist it! ‘On his own submission,’ persisted the sonorous tones, ‘the Doctor has admitted responsibility for destroying a complete species. Thus breaking Article Seven of Gallifreyan Law. For this there can only be one punishment!’

The Doctor knew what that was.

The forfeiture of all his remaining lives...

The Key of Rassilon

It seemed there was no help for the hapless Time Lord.

Not a single witness who could speak in his defence.

Peri, his companion, was dead.

Mel, his subsequent companion, was somewhere in his future. He could call on neither of them to testify on his behalf.

Someone though – an unexpected and unlikely saviour –

was waiting in the wings...

Two coffin-shaped caskets came drifting down a light beam. Like the TARDIS, which had been captured in a similar beam, they spun towards the hovering Space Station that housed the Courtroom, to land with a bump beside the deserted and somewhat battered navy-blue police box.

Both were occupied but the occupants were too dazed by the twisting, shaking and buffeting to do other than lie still.

Then a lid lifted.

A pair of crafty eyes peeked over the edge. Seeing nobody around, Sabalom Glitz oozed forth.

Sabalom Glitz! Thief, liar, and incorrigible rogue. A coward who would sell his grandmother to save his own skin. For whom profit was a god. A wheeler-dealer devoid of conscience, whom the Doctor had encountered on Ravolox.

‘How the blazes did I get here?’ muttered Glitz. ‘And anyway, where in the Universe is here!’

He received no answer. The manipulator behind this bizarre arrival was not ready to reveal his – or her –

‘Have you ought to offer in answer to the charge, Doctor?’

The Inquisitor’s head, wreathed in a flattering white headdress edged with a filigree trimming in gold, inclined towards the bemused Doctor.

‘Only one which you will not accept, My Lady.’

She knew what that was. The Doctor had been claiming throughout the trial that the events displayed on the Matrix screen were distorted.

‘This so-called evidence is a farrago of distortion that would have Ananias, Baron Munchhausen and other famous liars blushing down to their very toenails! Many happenings are not as I remember them!’ insisted the Doctor.

‘It may not accord with your memory, Doctor, but – as has been said before – it is possible for there to be genuine differences in recollection.’

‘Not that different. Even my story – offered in my own defence – has been falsified!’

A frown of reproval from the Inquisitor. ‘If you wish to make an observation, Valeyard, you will do so lucidly and with due deference to this Court.’

‘My apologies, ma’am. But I beg you to realise what is being implied here,’ came the obsequious rejoinder.

‘I understand that without the use of expletives! Doctor, what we have been watching on the Matrix screen are hard facts drawn from the Matrix itself. And the Matrix cannot lie.’

She adjusted the scarlet sash draped over her shoulders, a gesture with which the Doctor had become familiar: an indication of a flutter of uncertainty. He decided to capitalise on the moment. ‘I can quote an instance from my defence. According to what we saw on the Matrix screen, I destroyed the communications room on the Hyperion III.

Never! I swear I went nowhere near that room. Why would I? By smashing the equipment, we were effectively cut off.

Left to the mercy of the rampaging creatures whose sole aim was our annihilation!’

Murmurs and shuffles rippled along the benches as several venerable heads nodded in acceptance of the Doctor’s reasoning.

‘Fetch the Keeper,’ ordered the inquisitor.

A uniformed guard quit the Court.

‘Doctor, you are saying–’

‘That the Matrix has been tampered with. Yes. That the ragbag of evidence you have seen is the result of perjury.’

Gasps of horror hissed: such an accusation was equivalent to sacrilege.

Indomitably the Doctor persisted. ‘All I don’t understand is who’s doing the tampering. And why!’

He would find out.

And from a most unexpected source.

Alone with only his fears for company, Glitz chose not to reveal his presence.

Not without a back-up anyway, His partner, and minder, Dibber was nowhere to be seen. And Glitz was no glory boy!

He almost jumped out of his swarthy skin as a thump came from inside the other casket. He edged as far away as possible: these monstrosities looked too much like coffins for his taste!

‘Hey, what’s going on?’ came a shrill whine. More thumping from the inside. ‘Let me out of here!’

‘I’m not Dibber!’ declared the voice. ‘Neither am I a lad!’ Indeed Mel wasn’t. Her mass of red curls emphasising the blue of her costume, the diminutive new companion rose from the second casket. ‘And what’s more,’ she continued. ‘There’s nothing wrong with my voice!’ Her brown eyes surveyed his hotchpotch apparel with disapproval. ‘As a matter of total disinterest, who are you?’

I'm Not Scared by Niccolò Ammaniti
The Transference Engine by Julia Verne St. John
Me And Mrs Jones by Marie Rochelle
Yoga Cures: Simple Routines to Conquer Over 50 Common Ailments and Live Pain-Free by Tara Stiles
Coming Undone by Stallings, Staci
The Cardboard Crown by Martin Boyd
Kings and Emperors by Dewey Lambdin
KRAKEN by Vixen, Vivian
Songs of the Earth by Elspeth,Cooper
After Ever After by Rowan Coleman
Our partner