Read Doctor Who: The Way Through the Woods Online

Doctor Who: The Way Through the Woods 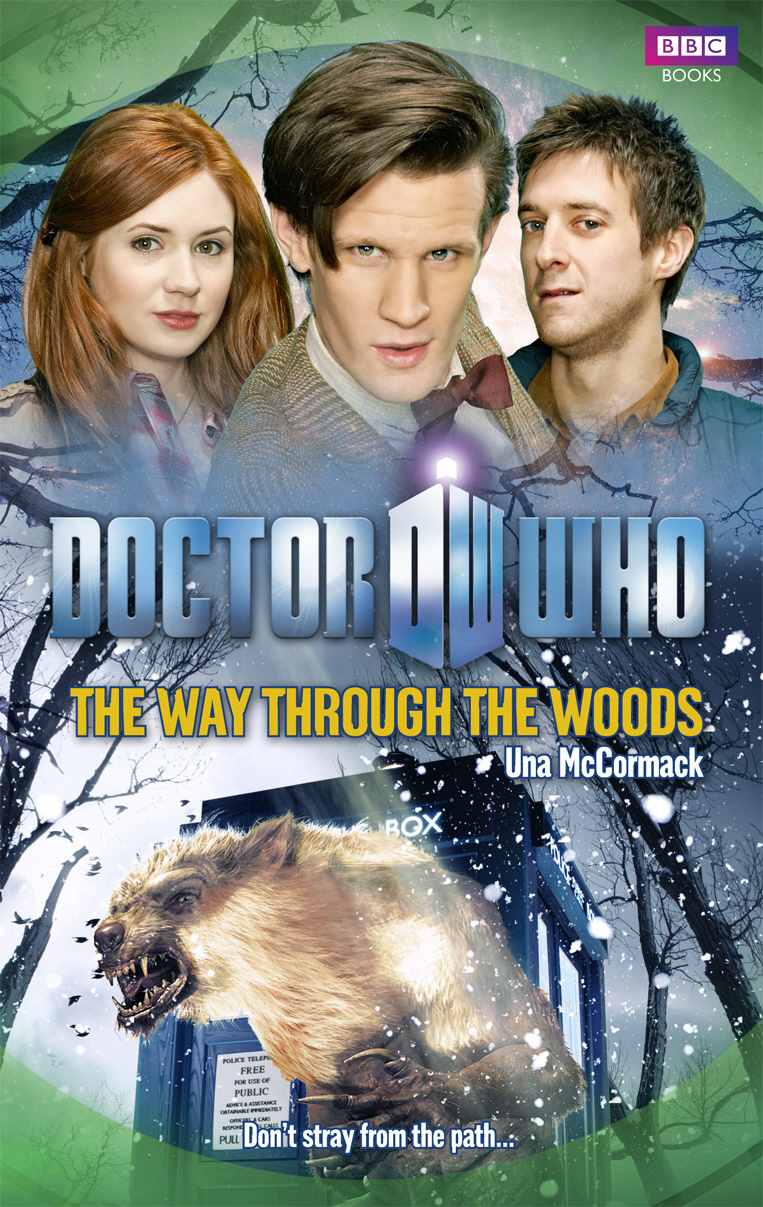 The Doctor Who series from BBC Books

'AS LONG AS PEOPLE HAVE LIVED HERE, THEY'VE GONE OUT OF THEIR WAY TO AVOID THE WOODS…'

Two teenage girls disappear into an ancient wood, a foreboding and malevolent presence both now and in the past. The modern motorway bends to avoid it, as did the old Roman road.

In 1917 the Doctor and Amy are desperate to find out what's happened to Rory, who's vanished too.

A thrilling, all-new adventure featuring the Doctor, Amy and Rory, as played by Matt Smith, Karen Gillan and Arthur Darvill in the spectacular hit series from BBC Television.

Night of the Humans
by David Llewellyn

The Forgotten Army
by Brian Minchin

The King’s Dragon
by Una McCormack

The Glamour Chase
by Gary Russell

Dead of Winter
by James Goss

The Way through the Woods
by Una McCormack

Touched by an Angel
by Jonathan Morris

For Kat
,
who also likes Amy

Between the housing estate
and the motorway lies an ancient wood. Birds live there, and foxes, and the many small beasts that snuffle round the undergrowth busy on their own quiet errands. The woods teem with life: sharp, clever robins and blackbirds with bright and restless eyes; owls that sleep by day and quest by night; vivid darting butterflies; and all the wild and thrilling creatures – badgers, and hares, and maybe even a glimpse of a soft-eyed, soft-footed deer with her small fawn. Yes, the woods are filled with life.

But not with people. People – human people – don’t go near the woods. The birds are left to nest in peace, the foxes to trot and hunt, the many small beasts to run and hide. And if, on a clear bright day, you took to the skies and you flew high, high above the land, you would see the trees gathered thickly in their hollow, old and dark and patient. You would see how the housing estate backs away from the forest, and you would see too how the motorway strains and bends to avoid it. Screwing up your eyes, you would look for a path leading into the woods – but you would not find one. Because there is no way through the woods. There has never been a way through the woods.

Vicky Caine’s watch was a sixteenth birthday present from her dad. Vicky Caine’s dad was short of cash that month, and the watch was of doubtful origin. But Vicky didn’t mind. She appreciated the thought, and she’d almost saved up enough from babysitting to get a proper watch, if she really wanted one. Besides, after sixteen years, Vicky had a pretty good idea of what her dad was like. Fun, but not what you would call reliable.

She was babysitting that evening for her parents’ friends Carole and Frank, who were at their dancing class. (Carole had made Frank take up tango because of Vincent on
Strictly Come Dancing
.) Vicky took their little boy Alfie up to bed at seven o’clock, read him his Charlie and Lola book (twice), and then she settled down in front of the television. Vicky liked BBC Four, but her older brother, Mark, laughed at her whenever she switched it on at home. Now she had four straight hours, curled up in Carole’s brown leather sofa, undisturbed by brothers or fathers. Bliss. Partway through a documentary about the Ancient Greeks, Carole and Frank came back in, cheerful from the exercise. They all had a cup of tea and a chat, and then Vicky noticed the time on her watch. Five to ten.

She grabbed her coat, and gave Carole a quick kiss, waving away Frank’s offer of a lift, as she did every week. No point in that when the bus took Vicky almost to her front door. Frank watched her to the end of the street. The stop was no more than minute’s walk from there.

It was a chilly night, late in October. During the day there was still bright sunlight and blue skies, but by this time there was a sharp edge to the air, as if the evening had suddenly drawn in its breath. Vicky stood beneath the dull orange street lamp, stamped her feet, and hummed contentedly to herself. After a few minutes, she started to get impatient. ‘Come on bus,’ she shivered. The last bus was often a bit late. Especially when it was cold.

Another few minutes, and she started to feel uneasy. She pushed up her glove to check the time.

‘Oh, you’re
kidding
me…’ Vicky tapped the face of the watch. The hands remained locked in place, frozen at an earlier time. ‘Oh,
Dad
…’

Who knew what time it was now? Had the bus come or gone? After a couple more minutes of indecision, Vicky heard, very faintly, blown towards her on the slight breeze, the town hall clock. It was chiming the quarter-hour.

That cleared it up, then. She’d missed her bus by a good ten minutes. So what now? She debated popping back and taking up that offer of a lift, but knocking at the door would almost certainly wake up Alfie, and she really didn’t want to drag Frank out. Taxi? Vicky sighed as she took out her phone. Taxis were
so
expensive.

No signal. She really was short of luck tonight. There was nothing else for it…

‘Mum’ll kill me if she ever finds out,’ Vicky murmured, as she set off down the lane. Still, now she had a twenty-minute walk to think up a good cover story. What time did that Ancient Greek thing end? She could say she stayed to watch it to the finish, and then suggest that she’d got a lift… Not outright lie, just
hint
… OK, so Mark would never shut up about it, but even that was better than admitting she’d walked home…

A walk which, so it turned out, was going to take longer than Vicky expected. Barely had she left the bus stop, when the lane started bending in the wrong direction, back towards the houses and away from the junction with Mill Road, where Vicky lived. She tried to picture the route the lane took, but couldn’t fix on anything substantial. She had a hazy sense that at some point it had to meet up with Mill Road. Why would a road wander like this? Weren’t roads meant to be straight, if at all possible?

‘Must be a contour line,’ Vicky mumbled to no one in particular. On the bus she had never noticed; she must always have been reading or listening to music. But it was going to add absolutely
ages
to her walk. ‘I am in
so
much trouble,’ Vicky told the cold clear sky. Some stars twinkled back, sympathetically, but didn’t deign to offer any advice. She tried her phone every so often, but still couldn’t get a signal. Must be some kind of dead spot, around the edge of the estate.

At last, the houses came to an end. Ahead, the lane curved on, lit at intervals by orange lamps that still bent gently away from where Vicky wanted to be. She stopped to get the lie of the land. In the distance, far behind and to her left, she could hear the soft throb of traffic on the motorway; the sound of safety, of civilisation. The new estate was behind her too, over on the right. Looking back over her shoulder at it, Vicky saw bright squares of light in upstairs windows where the curtains had not yet been drawn: people going to bed on an ordinary Tuesday night, everyday signs of everyday life. Carole and Frank would probably be in bed now, their house in darkness. No, Vicky didn’t want to disturb them.

The town hall clock chimed half past ten. Vicky looked ahead. On either side of her lay open ground, fields, cloaked in darkness, although looking straight across the left-hand side she could see what she thought were the street lights at the junction where the lane eventually met Mill Road. Why couldn’t a lane simply go
straight
when you most needed it? She crossed the road and stopped at the fence, looking at the beacon of light at the junction. If she cut across the field, she would get straight there. But cutting across the field would bring her very close…

Vicky shivered again. The woods were creepy. Everyone knew and everyone kept away. Parents didn’t have to issue warnings because kids didn’t even dare each other to go near. Vicky had never heard a reason, not a particular reason, but everyone knew to keep their distance from Swallow Woods. Probably it was nothing more than children’s tales; a memory of a dark and wild place glimpsed when you were small that somehow stuck with you, even when you were old enough to know better.

But the truth was that, right now, Vicky was far more worried about what her mum was going to say when she rolled up well after eleven o’clock. A kid’s tale about a scary forest was nowhere near as scary as Vicky’s mum when she thought one of her children had done something particularly irresponsible. Vicky rested her hand on the rough wooden fence and stared at the lights twinkling and beckoning over at the junction. If you thought about it, the woods were pretty much the safest place in the area – nobody went anywhere near them. This was the twenty-first century, not the dark ages, and Vicky was sixteen, not six. Who believed there were monsters in the woods?

The decision made, Vicky climbed over the fence and jumped down. She landed with a soft thud on compacted earth, and she was heartened to realise that this was a footpath of sorts. So other people did come this way and, looking at the path, it seemed they did so for the same reason as her: to cut off the loop in the lane and to get as quickly as possible to the junction with the road. So there was no reason to go near the trees. She could steer by the lights, and follow the path. There was no need to go anywhere near the trees. Not that it would matter. It wouldn’t matter at all.

The trees sat patiently, a dark and silent mass to her left. Vicky kept her eyes firmly fixed on the street lights. The path quickly became muddier, a mess of tufts of thick grass and clods of wet earth. The ground sloped down to the left, and it proved difficult for Vicky not to be drawn that way. As if the trees were acting like a magnet… but trees couldn’t do that, of course.

‘You’re spooking yourself,’ Vicky said. ‘You’re being stupid.’ Her voice came out high and rather thin, but firm enough to be a comfort. She shoved her hands deep into her coat pockets and plodded on.