Read Dogfight: How Apple and Google Went to War and Started a Revolution Online

Dogfight: How Apple and Google Went to War and Started a Revolution 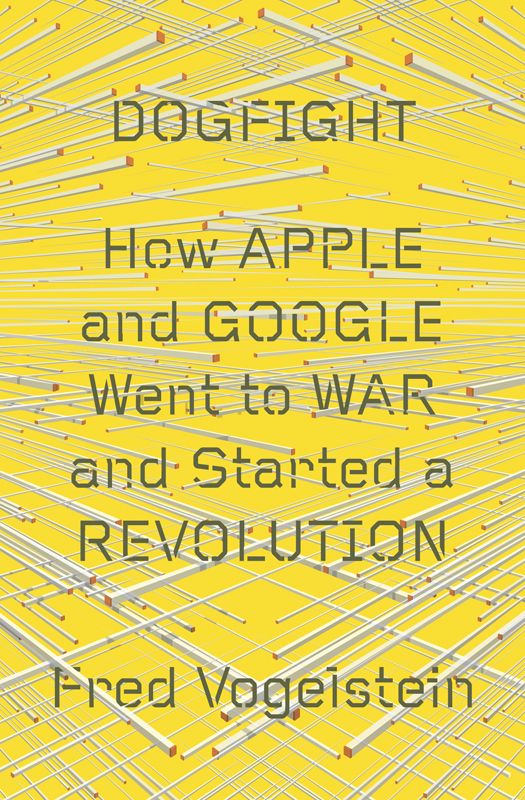 *Please note that some of the links referenced in this work are no longer active.

For Evelyn, Sam, and Beatrice

2.
The iPhone Is Good. Android Will Be Better.

4.
I Thought We Were Friends

5.
The Consequences of Betrayal

10.
Changing the World One Screen at a Time

A Note on My Reporting

When Steve Jobs stood before the world at the beginning of 2007 and said he was going to reinvent the cell phone, the expectations were modest—at best. Jobs had upended the music business with the iPod and iTunes. But taking on the cell phone industry? That seemed unlikely. The wireless carriers, who controlled the market, had been foiling cell phone innovators for years. And the iPhone, while cool looking, seemed no match for their iron grip on the industry. It was more expensive than most phones out there. And it was arguably less capable. It ran on a slower cell/data network. And it required users to type on a virtual, not a physical, keyboard. To some critics, that meant the iPhone was dead on arrival.

If anything, Jobs undersold the iPhone that day. It truly was a breakthrough. The iPhone wasn’t really a phone, but the first mainstream pocket computer that made calls. With its touchscreen, it did so many things that other phones could never do that consumers overlooked its shortcomings. Consumers got used to the virtual keyboard, and Apple continued to make it better and better. It cut the price to equal that of other phones. It quickly upgraded the slower cell/data radios to make its technology competitive. It developed displays with unheard-of resolutions. It bought a chip design company to make sure the iPhone was always the fastest device out there. It rolled out a completely new version of the iPhone software every year. And it designed iconic television ads—as it had done for the iPod—that made consumers feel special about owning one.

The subsequent frenzy of demand gave Apple and Jobs the leverage to turn the tables on the wireless carriers and start telling
them
what to do. More important, it ignited a technology revolution that today touches almost every corner of civilization. The iPhone has become one of the most popular cell phones of all time, selling more than 135 million units in 2012 alone. It has become the platform for a new and hugely profitable software industry—phone apps—that has generated more than $10 billion in total revenues since starting five years ago, in 2008. And the iPhone has become the source of an entire rethink of how humans interact with machines—with their fingers instead of buttons or a mouse. The iPhone and its progeny—the iPod Touch and the iPad—haven’t just changed the way the world thinks about cell phones, they have changed the way the world thinks about computers for the first time in a generation, arguably since the advent of the Macintosh in 1984.

Since 2010, when Jobs followed the iPhone with the iPad, the questioning has grown frenzied. Who said our computer had to sit under our desk or on our lap? Can’t it just be a screen that fits in our pocket or purse, or something we leave lying around the house? Indeed, if you compare iPad sales to sales of desktops and laptops, Apple is now the largest PC maker in the world. It now sells more iPads per quarter than Dell or HP sells laptops and desktops. Apple’s total sales of iPhones, iPads, and iPod Touches now exceed 200 million devices a year. That’s about the same number of TVs sold by all manufacturers every year and about four times the number of cars sold worldwide. All of this has turned Apple, the corporation, into a colossus larger than even Jobs’s enormous ambitions. Once on the precipice of bankruptcy, in 1997, Apple today is one of the most valuable and profitable companies anywhere.

And yet Apple behaves like a corporation under siege—because despite all this success, it is. From the moment in late 2007 that Google unveiled Android—and its own plan to dominate the world of mobile phones and other mobile devices—Google hasn’t just
tried
to compete with the iPhone, it has
succeeded
in competing with the iPhone. Android took hold in 2010, and it has exploded in popularity since. To Apple’s astonishment, there are now more smartphones and tablets running Android software than there are iPhones, iPads, and iPod Touches running Apple’s software, known as iOS. In 2012 there was even debate about whether the iPhone was the most popular smartphone anymore. During the third quarter of 2012, some surveys said, Samsung sold more Android-powered Galaxys than Apple sold iPhones.

Apple ended the “who has the most popular smartphone” discussion at the end of 2012, when it unveiled the iPhone 5. But more and more wonder whether this is even relevant anymore. The differences between the two platforms are narrowing by the day. Sure, they are different structurally. Apple makes every inch of the iPhone—the hardware and the software (though the devices are assembled in China). Google just makes the software for Android phones. It allows phone manufacturers such as Samsung to make the hardware. But both platforms now have an equivalent number of pluses and minuses: Apple’s platform is a little easier to use, but it only offers three products—the iPhone, the iPad, and the iPod Touch. Google’s platform offers many more phone choices, and often has the latest phone features ahead of Apple, but it lacks the polish of Apple’s interface. Still, both platforms are now equally available among large carriers worldwide, and, with the exception of Apple stores, they are available for purchase in the same places.

Seeing Apple’s market dominance challenged so swiftly and broadly was uniquely painful for Jobs and remains that way for the company’s other executives. Jobs thought, and Apple executives still think, that Google and the Android community cheated to create their success. They think that Google executives stole Apple’s software to build Android, and that Android’s largest phone maker, Samsung, copied Apple’s designs to build its supersuccessful Galaxy phones. They feel betrayed. Apple and Google weren’t just business partners when the iPhone was unveiled in early 2007. They were spiritual allies—the yin and yang of the technology revolution. This was one of the closest alliances in American business. Apple made great devices. Google made great software. Google’s founders considered Jobs to be a mentor. Google’s then CEO, Eric Schmidt, sat on Apple’s board of directors. They had a common enemy: Microsoft. Together they planned for a long and prosperous marriage.

Then, as can happen in a marriage, the relationship frayed. Secrets were kept. Promises were broken. And the two went to war. When Jobs died in October 2011, there was hope that the dogfight would feel less like personal betrayal and quiet down—that Apple’s new CEO, Tim Cook, would take the emotion out of the battle and find a way to settle it. But if anything, Apple has gotten
more
aggressive and nasty toward Google since then. It still has dozens of patent lawsuits in at least seven countries pending against the Android community—mostly against Samsung and Motorola (owned by Google). In the summer of 2012, it took the unheard-of step of having its fight with Samsung, Google’s top distributor of Android phones, tried in front of a jury in San Jose. It won a $1 billion judgment, though that is being appealed. In September 2012 Apple stopped selling the iPhone preloaded with Google Maps. It replaced the app with one of its own, despite wide consumer complaints that the app was inferior. Apple is believed to be working on a video service to compete with YouTube, which Google owns.

Apple has even begun replacing some Google search technology in the iPhone with search technology from its old enemy, Microsoft. Now when you use Siri, the iPhone’s voice recognition feature, Apple’s newest software no longer uses Google search. Instead, she queries Microsoft’s Bing search engine, which has been clawing at Google for a decade over search market share. To get Siri to use Google’s search, you have to specifically ask her to “search Google” before each request. Google is still the default search engine inside the iPhone’s web browser. But for those with long memories, the idea that Apple would dump any Google technology for Microsoft’s—when Microsoft was the bitter enemy of both for so long—is an astonishing development.

Google’s public posture in its fight with Apple has consistently been “Who, us? We’re just a bunch of geeks out to change the world.” But in its quiet, nerdy way Google has fought back ferociously. It defied Apple’s demands that it remove software from Android phones or face patent lawsuits. It employed tactics to make Jobs look like an unhinged tyrant. And it bought the cell phone maker Motorola for $12.5 billion in 2012, its largest acquisition by far. It said the only purpose of the purchase was to buy Motorola’s patents. It said it would be easier to fight a litigious opponent like Apple if it owned the company that invented the modern cell phone and all the patents associated with that. That’s true, but the claim hid another equally powerful reason: the acquisition means that Google will always be able to make phones to compete with Apple no matter how successful Apple is with its lawsuits against other phone and tablet manufacturers. The purchase also gives Google leverage in case new challengers emerge.

Last, Google now finds itself doing something most thought it would never do: it is making its own consumer electronics from scratch to compete with Apple devices in the living room. Google has all the pieces not only to hook users on cell phones running its Android software, but to reach them wherever they go, inside or outside their homes.

Usually, the story of two companies and their powerful leaders going at it makes a great magazine piece and little more. Company X attacks company Y. Company Y fights back. One wins. One loses. But this is a much bigger tale than that. It’s hard to imagine a more revolutionary object than the object the two companies started fighting over: the smartphone. The smartphone has fundamentally changed the way humans get and process information, and that is changing the world in ways that are almost too large to imagine. Ponder the individual impacts of the book, the newspaper, the telephone, the radio, the tape recorder, the camera, the video camera, the compass, the television, the VCR and the DVD, the personal computer, the cell phone, the video game, and the iPod. The smartphone is all those things in one device that fits in your pocket. It is radically changing the way we learn in school, the way doctors treat patients, the way we travel and explore. Entertainment and all media are accessed in entirely new ways. That sounds like something Jobs might have said at one of his famous product launches. But it is not an exaggeration.

What this means is that Apple versus Google isn’t just a run-of-the-mill spat between two rich companies. It is the defining business battle of a generation. It is an inflection point, such as the moment when the PC was invented, when the Internet browser took hold, when Google reinvented web search, and when Facebook created the social network. In this massive reexamination of how technology, media, and communications intersect, two of the most powerful companies in the world to dominate that new landscape are in open warfare.