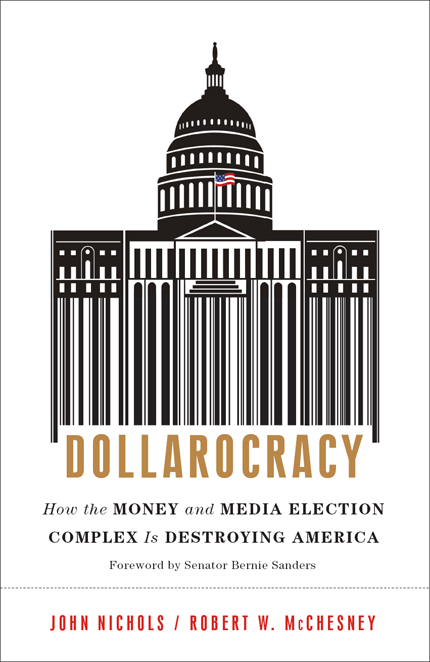 The Death and Life of American Journalism: The Media Revolution That Will Begin the World Again
(2010)

How the Money-and-Media Election
Complex Is Destroying America

Nation Books, A Member of the Perseus Books Group

Nation Books is a co-publishing venture of the Nation Institute and the Perseus Books Group.

All rights reserved. No part of this book may be reproduced in any manner whatsoever without written permission except in the case of brief quotations embodied in critical articles and reviews. For information, address the Perseus Books Group, 250 West 57th Street, 15th Floor, New York, NY 10107.

Books published by Nation Books are available at special discounts for bulk purchases in the United States by corporations, institutions, and other organizations. For more information, please contact the Special Markets Department at the Perseus Books Group, 2300 Chestnut Street, Suite 200, Philadelphia, PA 19103, or call (800) 255-1514, or e-mail
[email protected]
.

For Whitman, Amy, and Lucy

WALT WHITMAN,
SONG OF MYSELF

M
ore than a decade ago, in April 2002, I opened a crowded meeting at the Unitarian Church on Main Street in Montpelier, Vermont, by announcing, “I want to welcome you to what I believe is the first congressional town meeting ever organized to address the issue of corporate control of the media.” For the next several hours, John Nichols, Bob McChesney, and I had the remarkable experience of talking with and listening to citizens who were ready to engage in a serious discourse about the role of a free press in sustaining democracy. The people got it, as they almost always do. Even then, they could see what we saw: a decline in the amount and quality of journalism and a parallel rise in the influence of Big Money in our politics.

The media reform movement that Nichols and McChesney have done so much to fosterâas the authors of four books on media policy, as advocates for independent media, and as cofounders of the nation's media reform network, Free Pressâhas always sought to address that concern. I've been proud to work with them on media issues and proud of the successes we have had in pushing back against consolidation of media ownership and in supporting public and community broadcasting and maintaining net neutrality.

But Nichols and McChesney have always argued that realizing the full promise of a free press in America must be seen as the founders saw it: as a way of providing the information and ideas that sustain democratic discourse and enable citizens to cast informed votes. And the past decade has, unfortunately, been rough on democratic discourse and on democracy itself. Local newspapers have closed or been downsized. Coverage of statehouses and even of Washington, DC, is declining. Although there is hope for online journalism, resources are few. For tens of millions of Americans, an information void
has developed. And it is being filled by political advertising and public relations spin.

The simple truth is that we cannot govern our own affairs when our national, state, and local debates are bought and sold by billionaires, who use thirty-second commercials to shout down anyone who disagrees. Democracy demands a rich, robust discourse about ideas, not a spending spree that demeans those ideas, diminishes honest debate, and turns voters off to the political process. Yet this is the threat we now face. In this book, Nichols and McChesney, pioneers in explaining the relationship between media and democracy, step up to address the great challenge of our time: the replacement of democracy with what they describe as Dollarocracy.

This is not a casually chosen term. They suggest that with the decline of independent journalism as a primary source of information about elections and governing, and its replacement by now-omnipresent political advertising, especially since the Supreme Court's
Citizens United v. FEC
ruling, we have seen the development of an electoral equivalent to the self-perpetuating military-industrial complex that Dwight Eisenhower warned us about. The money-and-media election complex, producing a slurry of negative ads, spin, and obstruction, is not what the founders intended.

That's one reason that I was proud to introduce a Saving American Democracy amendment to the U.S. Constitution that says corporations are not persons with constitutional rights equal to real people, corporations are subject to regulation by the people, corporations may not make campaign contributions or any election expenditures, and Congress and the states have the power to regulate campaign finances. In this book, Nichols and McChesney make a powerful case for why it is necessary to amend the Constitution to tackle the Money Power that the Progressive reformers of a century ago warned would replace democracy with plutocracy.

But they do not stop there. They recall the Progressive Era and argue that America is ripe for a new age of reform that focuses on renewing democracy and that takes as its foundational premise an understanding that the essential act of democracy, voting, must be protected and made meaningful by legislation, statutes, and amendments. Nichols and McChesney are not doctrinaire; they recognize that many reforms can and should be entertained and that not every American will agree on every proposal. But, they argue, the energy that
has been seen in popular protests on behalf of labor rights; in campaigns to defend public education and public services; in the movements to save Social Security, Medicare, and Medicaid; in the Occupy movement's challenge to income inequality; and in the town meetings of my home state of Vermont, which have called for amending the Constitution to address corporate abuses of the political process constitutes evidence of a rising call for reforms that will allow American democracy to work for all Americans, not just a privileged and powerful few.

This is an exciting prospect and one with deep roots in American history. The wisest of the founders recognized that America would evolve and change with time, and they rested great power in the people to assure that the evolution might serve the common good. With this book, John Nichols and Bob McChesney invite Americans to examine in new ways the challenges facing America and to fully recognize the threat that the combination of Big Money and big media poses to the promise of self-government. They paint a daunting picture, rich in detail based on intense reporting and groundbreaking research. But they do not offer us a pessimistic take. Rather, they call us, as Tom Paine did more than two centuries ago, to turn knowledge into power. And they tell us that we can and must respond to our contemporary challenges as a nation by rejecting Dollarocracy and renewing our commitment to democracy.

The land that never has been yetâ

And yet must be

T
here comes a point, sometime after the last election campaign, when a politician becomes a statesman or a stateswoman. And it is at that point when he or she begins to speak the deeper truth, what Walt Whitman described as the “password primeval” of our American experiment.
1

The truth these statesmen and stateswomen tell today is a harrowing one.

Bemoaning “a dangerous deficit of governance” that has left critical issues unaddressed, former vice president Al Gore argued in his 2013 book,
The Future
, that “not since the 1890s has U.S. government decision making been as feeble, dysfunctional, and servile to corporate and other special interests as it is now.”
2
From across the aisle, 2012 Republican presidential contender Jon Huntsman decried deficits of leadership and confidence and declared that, corrupted by special-interest money and corroded by the crude cynicism of negative politics, “the system is broken.”
3
But the most damning delineation of the Zeitgeist came from the most senior of our nation's former presidents, Jimmy Carter, who looked out across the American political landscape in the midst of the 2012 election campaign and saw a political process “shot through with financial corruption” and witnessing “a total transformation of America into a negative campaigning process.”
4

Describing the 2010 U.S. Supreme Court ruling in the case of
Citizens United v. FEC
as “a major victory for big oil, Wall Street banks, health insurance companies and the other powerful interests that marshal their power every day in Washington to drown out the voices of everyday Americans,” Carter declaredâas the planet's most famous election observerâthat “we have one of the worst election processes in the world right in the United States of America, and it's almost entirely because of the excessive influx of money.”
5

Castle of Wizardry by David Eddings
All the Roads That Lead From Home by Parrish, Anne Leigh
The Hive by Claire Rayner
Bayward Street by Addison Jane
Bane by Brenda Jackson
For This Life Only by Stacey Kade
A Cry In the Night by Mary Higgins Clark
Teetoncey by Theodore Taylor
My Masters' Nightmare, Season 1 / Episode 13 by Marita A. Hansen
Hard to Handle by Raven Scott
Our partner