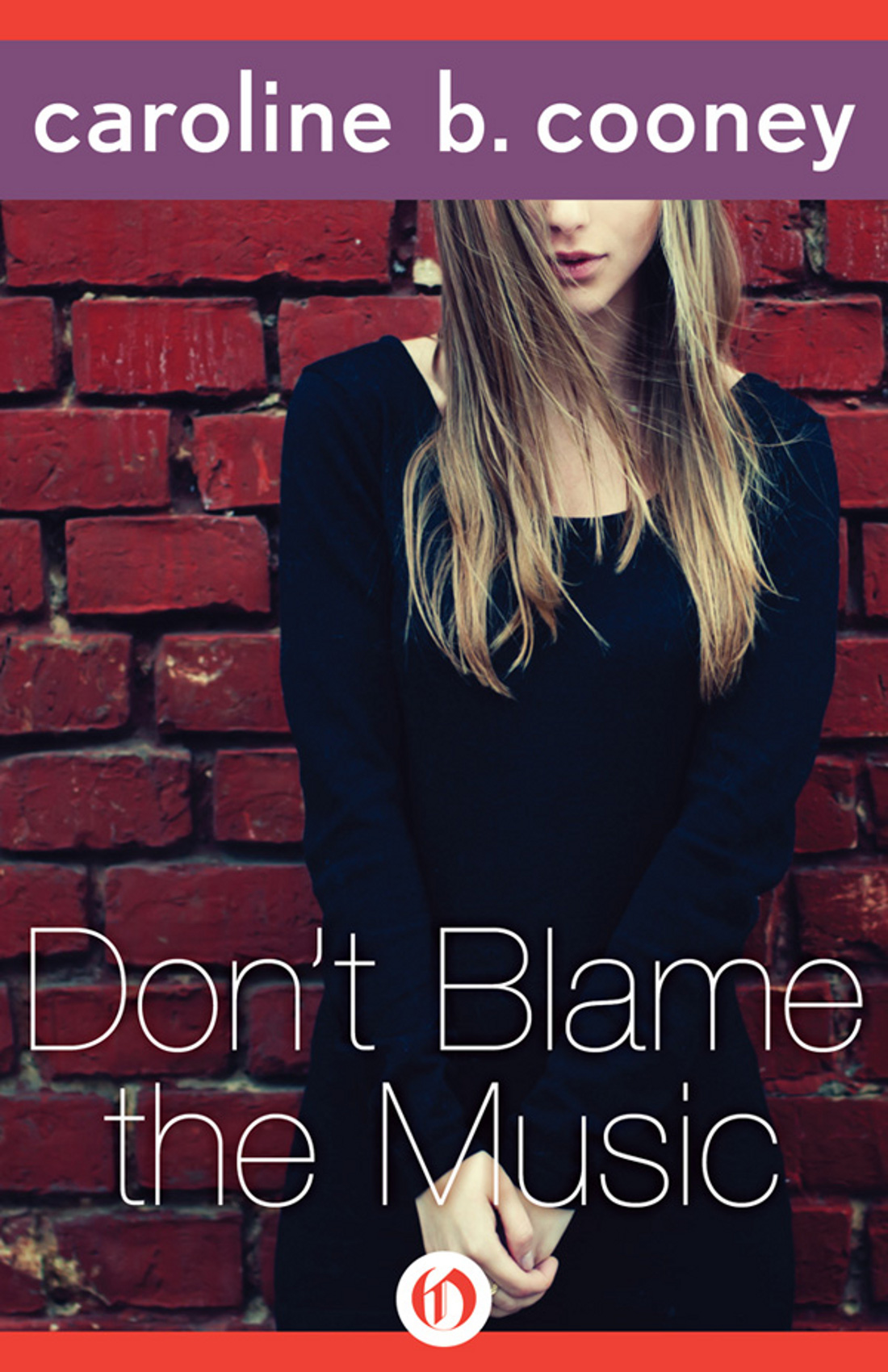 whose idea this was

A Biography of Caroline B. Cooney

They count even if you're unconscious, or crazy, or missing.

Sometimes a birthday counts more for the people who aren't having one than for the person who is.

It was the twelfth day of my senior year, but that mattered only to me. Somewhere on the globe, my sister Ashley Elizabeth Hall was a quarter of a century old.

We weren't talking about it.

One of the things we do best in my family is not talk about Ash. It isn't easy. If there is one thing Ash excelled at, it was doing things everybody had to talk about. The neighbors, the police, the townâand, for one shining moment, the whole nation.

I took a look at myself in the mirror. A shaft of sunlight caught my hair and added fiery autumn tints to its plain thick brown. I was wearing a lustrous new eye shadow my friend Cindy had loaned me and it made me feel mysterious, like a woman with a past. I smiled into the old warped mirror and it winked back. With two centuries of reflections for it to remember, mine would not be the loveliest. But I could pretend.

With a shriek of brakes and tires, Jeffrey's car arrived in front of our house. The first leaves of autumn rose up from the gutter in a rustle of protest. Jeffrey leaned on his horn and stayed there.

Ours is an old, old street, with gnarled trees and dark stone walls that watched the American Revolution. They also watched my sister Ashley. That war and Ashley were the two biggest rebellions ever to hit the coast of Connecticut. I did not think the street was impressed by Jeffrey, whose idea of rebellious behavior was to honk a horn too long.

Instead of kissing me goodbye, however, my mother started up a new conversation. “I'm dieting again,” she told me. “Do you think I will lose more weight standing or sitting?”

“We'll have to debate that another time, Mom,” I said, laughing. “Jeffrey has taken a permanent position on the horn.”

My mother's fingers caught the loops of my jeans. “I should get you new jeans,” she said.

I adore clothing. “That would be wonderful,” I said. “Have to go, Mom.”

She did not let go. Her fingers tightened, the knuckles going white. “Mom?” I said. “Something wrong?” I knew what was wrong, of course. Ashley. A person's own mother would at least like to know if her first-born is alive on her twenty-fifth birthday. But I was headed for the first meeting of the yearbook staff, this morning before classes began. I didn't want the topic of Ashley to ruin such a good day. My very own classâplanning graduation. Incredible.

Mom's chin was trembling and her eyes shone with tears. Jeffrey continued to lie on the steering wheel. “You have plans for today?” I said sharply. She'd be all right if she kept busy.

She nodded. “Swish and spit.”

My mother is the quintessential school volunteerâeverything from math tutoring to lunchroom monitor. She comes home damp from swish and spit (third-graders taking fluoride treatments feel honor-bound to miss the basin) but she enjoys it. “Hey, have fun,” I said, and I peeled her off me and sped out to Jeffrey's car.

There is nothing between Jeffrey and me but a stick shift. His only virtue is that his car is more comfortable and has fewer sophomores in it than the school bus. Jeffrey grunted hello and removed himself from the horn. The silence was blessed. Behind us, my mother stood in the doorway with her arms wrapped around herself, as if clasping an invisible child.

At the corner of Maple and Chestnut we picked up Swan. Ours is a rich Fairfield County town where people commute to New York City to earn money to support their Mercedes habits and where boys are named names like Halsey Dexter (which will look good on a letterhead one day) and end up being called Swan because they have long necks and hobbling Adam's apples.

My mother claims that one day Swan will be very distinguished looking. I don't want to wait for “one day.” I want a distinguished male admirer right now. Therefore I do not daydream about Swan.

Swan bent his neck and lurched into the backseat of Jeffrey's car. “Hello, Beethoven,” he said to me.

One day in junior high I was in a talent show. Actually I'd quit piano lessons due to a total
lack
of talent, but I got conned into playing my one decent piece on stage. It happened to be the second movement of the
Sonata Pathetique
and I acquired the nickname Beethoven. Poor Ludwig. He deserved better than me for a namesake.

“Why, Swan!” I exclaimed, noticing. “You got your braces off. You look terrific.”

Swan grinned shyly. Faintly I could see what my mother meant about his future looks. Too faint to bother with, though.

At the corner of Leeward Lane and Pepperidge, we picked up Emily. Emily is stodgy and stuffy. “You going to join the yearbook staff, Beethoven?” she asked.

“I'm thinking about it.”

I did. I loved the whole thought. That thick volume, its glossy pages, the white spaces for friends to fill with scribbled jokes, signatures, and memories.

“I,” said Emily, “will be advertising editor.”

“Nobody would buy a thing from you, Emily,” said Jeffrey.

“Always ready to encourage, aren't you?” said Emily. “Everybody will buy from me. I'll just stand there and obstruct the flow of business until they submit.”

We all laughed. Emily does have a rocklike personality.

I stopped listening. Emily's father is very important. Most fathers are in this town. Emily told us how her father (the brilliant advertising account executive) was going to work with her. I was afraid with his assistance the yearbook would have eight hundred pages of full color ads and no photographs of the senior class.

The only reason I didn't fall out of the car is that it's very solidly built. We reached the high school parking lot. “I don't see why the teachers get to park closer to the door than we do,” complained Jeffrey.

“They're older,” I said. “They stagger under the weight of their responsibilities.” I thought of my mother, who had staggered and fallen.

My early memories of Ashley are good. She adored me. I was her darling baby sister, Susan. She comforted me when I fell from my bike and scraped my knee. She told me stories on Christmas Eve when I thought morning would never come. Snuggled in bed with me when I had nightmares and the moonlight tortured the shadows on our bedroom ceiling.

But when she came home several years ago she was calling herself Trash, and the name was frighteningly apt.

Jeffrey drove across the lot at one eighth of a mile per hour, searching for the slot closest to the entrances. He does this every morning and every morning there
are
no slots near the entrances, but in the two years Jeffrey has been driving to high school he has not caught on to the fact that when you're the last to arrive, you park at the back of the lot.

“Hey, Beethoven!” came a scream. Cindy flew across the parking lot toward us, a blur of scarlet and gold. My mother refers to Cindy as the Blender, because she's always whipping at top speed.

“Hi, Cin,” I said, forgetting Ash, Jeffrey, Emily, and Swan. Together we walked to the yearbook meeting.

“On the twelfth day of school? Give it a chance.”

“It's had a chance. I want this to be a perfect year. I don't want it studded with academic problems.”

“I myself want it studded with boys,” I said.

Cindy nodded. “You realize, Beethoven, that it's only 241 days till the senior prom.”

“Deadline fast approaching. We have to get our acts together.”

From eighth grade through tenth, Cindy and I dated easily and constantly. But something went wrong junior year. We were stranded without boys all year long. Now, twelve days into senior year, we were dreading a repeat.

“You know, Beethoven,” said Cindy, “your hair looks fabulous. It's got fire in it. Red and gold glints.”

“If only a boy would say that kind of thing to me.”

“If he did, you'd know he was a pansy to think of it,” Cindy pointed out, and we laughed, and walked into the yearbook meeting.

Shepherd Grenville is editor. She is stunningly beautiful, depressingly smart, wonderfully athletic, and impressively popular. Shepherd is going to Harvard, as she told us back when we were in second grade and thinking only about going to the bathroom.

Harvard has not yet agreed, however. Shepherd's whole life is built around getting into Harvard. If she only goes to Yale she will never live down the shame of it all. The thing is, thoughâordinary girls don't go to Harvard. Even a lot of extraordinary girls don't go to Harvard. Therefore it is important to do something to make yourself stand out from a crowd of overachievers. When they're stars, you make plans to be the whole galaxy.

Shep arouses mixed feelings in me. Ashley had that kind of determination, and terrible things happened to Ashley.

“Attention, please,” said Shepherd sharply. She stood like a picture in a frame: elegance perfectly packaged.

While she talked I watched Anthony. Definitely the finest our senior class has to offer, Anthony is beautiful, smart, sexy, and preppy. You'd think Anthony dated all the time, because he flirts like mad and is always hugging or kissing somebody in the hall. But the truth is Anthony hardly ever takes a girl out. Only we confirmed Anthony-watchers realize this. I was not the only one looking at Anthony. So was Shepherd. I sighed. I couldn't compete with her.

“I know what we could do,” I whispered to Cindy. “Skip the yearbook entirely and do a calendar.”

Or what passes for my name. I really must do something about this Beethoven, I thought. Susan instead.

“You will be music editor.”

I forgot to be courteous. “There's no such thing as a music editor on a yearbook, Sheppie,” I said irritably.

She hates being called Sheppie. I don't blame her. I don't exactly love being called Beethoven. “What would there be to do except get photographs of the marching band and the concert choir and get names in the right order?” I said.

Even with fifty seniors looking at me my mind was drifting. I was thinking of Anthony, and of boys, and rock music. I am constantly composing rock lyrics in my head.