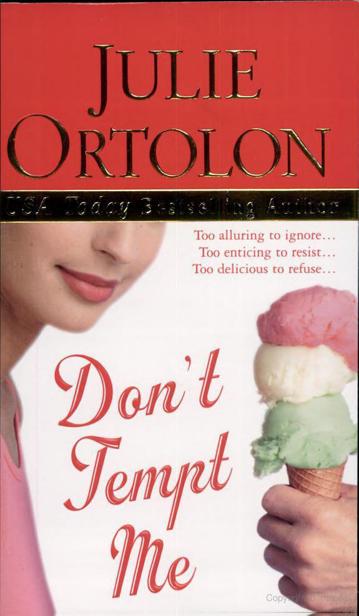 Formatted by Pam Headrick of
A Thirsty Mind

All right reserved. No part of this may be used or reproduced in any manner whatsoever without permission except in the case of brief quotations embodied in critical articles and reviews.

This book is a work of fiction. Names, characters, places and incidents are either products of the author's imagination or used fictitiously. Any resemblance to actual events, locales, or persons, living or dead, is entirely coincidental. All rights reserved. No part of this publication can be reproduced or transmitted in any form or by any means, electronic or mechanical, without permission in writing from Julie Ortolon.

Learn more about the author and her books at
JulieOrtolon.com
or visit
PearlIslandBooks.com
.

Excerpt from
Falling For You
, book one in the Pearl Island trilogy

Excerpt from
Lead Me On
, book two in the Pearl Island trilogy

Excerpt from
Almost Perfect
, book one in the Perfect trilogy

Jackie Taylor had little use for fairy tales and even less for charming princes, which was why it really irritated her when he came striding back into her life. One minute she was straddling a workbench as she repaired a sail for her charter ship, the next she looked up to find Adrian St. Claire filling the doorway of her dockside shed. The brilliant sun of the Texas coast silhouetted his six-foot-plus frame as he came toward her with cocksure grace.

"Dammit," she muttered under her breath. Didn't she have enough problems on her mind without Mr. Gorgeous coming around to scramble her brain cells?

"What's that?" Tiberius, her first mate, glanced up from his end of the workbench. A wide smile split his face, his teeth a startling white against his mocha-colored skin. "Weeell, Adrian," he said in his distinctive Caribbean accent. "What you doin' in Corpus Christi, mon?"

Jackie knew exactly why the man had come, but tried to not let it rattle her. The fact that his trip had nothing to do with her personally helped calm her nerves, even as it deflated the ego.

"It was a nice day for a motorcycle ride," Adrian said. "So I thought I'd head down the coast from Galveston and see what's shaking on your stretch of beach."

As he moved out of the glare of the light, she couldn't stop her gaze from sliding over his lean body. She might have little use for men who collected female admirers just by walking down the street, but that didn't keep her from enjoying the view. And he did provide a nice one dressed in a red T-shirt and faded blue jeans that fit his muscles just right. He'd pulled his long black hair into a ponytail, and a small gold hoop earring glinted in the shed's dim light. As the two men shook hands, she marveled at the contrast between them. Ti, with his shaved head and hard body, reminded her of a massive, steady frigate while Adrian made her think of a clipper, sleek and beautiful and rigged for racing.

Adrian nodded toward the slice of bustling dock visible through the door. "From all the tourists snapping pictures of the
Pirate's Pleasure
, I trust business is going well."

"It would if da harbor stop chargin' a fortune for our slip," Ti said with good humor, as if her business wasn't teetering on the brink.

Adrian turned toward her and his smile softened with lazy sensuality. "Jackie. Long time no see."

For a moment, she lost herself in clear blue eyes surrounded by sinfully long black lashes. His features were so flawless, they'd be "pretty" if he weren't so ... breath-takingly
male
. That masculinity stirred up longings best ignored, not just to be touched, but to be cherish and protected. As if she could ever count on a man for that when things got tough.

Irritated, she ran a hand through her hair, uncomfortably aware that she'd cut her hair boyishly short since the last time she'd seen him. "I gave your family my answer on the phone. And the answer was no."

His brows shot up. "Well, now, that's cutting right to the chase, isn't it?"

Ti flashed her a questioning look, since she hadn't confided in him about the St. Claires' request.

"I find a direct approach saves time." Securing the large needle in the canvas, she thrust the sail aside and rose. "Now, unless there's something else you want" ---
besides my great-grandfather's letter
---"I'll let you be on your way."

His gaze moved over her face with such intensity, her stomach fluttered. "What if the 'something else' I wanted was to take you to dinner?"

"Right." She snorted, squelching the instant leap in her pulse. Conscious of her first mate hanging on every word, she crossed to a water cooler by the door. Beyond the shadows of the shed, tourists wandered the pier, buying fresh shrimp off the boats. Their voices mingled with the rhythmic rush of waves underfoot and the incessant cries of seagulls. Unseasonable heat for early November hung heavy in the air, and the denim shirt she'd tied at the waist over a sports bra and shorts felt heavy against her skin.

After filling a paper cup with chilled water, she glanced at Adrian as he came up behind her. Her nerves tingled alarmingly with awareness, a reaction that irritated her. "I have no desire to waste an evening listening to you try to talk me out of something I have no intention of giving you."

He said nothing at first, but she could feel him watching her. "I think the question here is, what am I prepared to give you?"

She turned and found him leaning against a worktable, his scuffed motorcycle boots crossed at the ankle. "Oh?"

He wiggled his brows playfully. "I'm here to make you a proposition."

Her heart pounded even as she forced a laugh. "Don't even try to sweet-talk me. We both know I'm not your type."

His infectious chuckle teased her senses. "And what would 'my type' be?"

"That's just packaging. But if it comes with a personality and some brains, absolutely."

The man was impossible to rile. Something she should have remembered from dealing with him a year ago. He and his two sisters had hired her ship, a two-hundred-year-old Baltimore schooner, as part of the entertainment for the annual Buccaneer's Ball. The event had been held at the Pearl Island Inn, a bed-and-breakfast owned by Adrian and his sisters, located on its own private island near Galveston. During the few days the
Pirate's Pleasure
had been anchored in their cove, Adrian had flirted with her shamelessly. Not that she took any of it seriously. Like all charming men, he simply enjoyed flirting.

"In case you misunderstood, that was a no." She downed the cold water and crumpled the paper cup.

"I was thinking somewhere quiet ---"

" ---where we can discuss what my sisters and I are willing to offer in exchange for your help."

"Or ... I can proposition you right here." He leaned closer and she caught a whiff of him. Oh, God, he even smelled good: like soap and sunshine and a fresh sea breeze. His gaze dropped to her mouth, then lifted back to her eyes. "I think we'd both be more comfortable talking over seafood and a nice bottle of wine."

She shook her head, amused despite herself. "Do you ever take no for an answer?"

"I just bet you don't." She entertained the idea of hefting him over her shoulder, walking out onto the pier, and tossing him into Corpus Christi Bay. Considering his size, she didn't think she'd get too far with that plan. "Okay, what the heck. I'll have dinner with you as long as you pick up the tad."

"Of course." He looked comically offended.

"Fine, then. It's your money and your time to waste."

"Great." His eyes lit. "How about the Wharf? Early enough to enjoy the sunset. Unless you'd rather go somewhere else."

"No, the Wharf is fine." Perfect, in fact, since it was right at the end of her pier. She'd be close enough to home to ditch him if he became too annoying.

"I'll pick you up around six, then," he said. "I assume you still live on board your ship."

"Then I'll see you this evening." With a wave to her first mate, he strode past her, back into the sunshine. She watched as he wound his way past tourists and fishermen to the black Harley he'd left parked at the end of the pier. He donned a black leather jacket but left it unzipped in deference to the warm weather. With a move that made her pulse hum, he swung a leg over the seat, kicked the engine to life, and had it roaring with a few twists of his wrist. Then he zoomed off down the busy four-lane road that skirted the beach.

She couldn't help but shake her head in amusement. He was persistent, she'd give him that. And more gorgeous than any man had a right to be. The gene fairies must have been in a wicked mood the day they made Adrian St Claire or they never would have unleashed all that sex appeal on womankind.

"Care to tell me what dat about?" Ti asked from the workbench.

She glanced at him. "Adrian and his sisters have been bitten by the treasure-hunting bug."

"Ah..." Ti stretched the word out. "De allure of Lafitte's missing treasure. I guess we lucky you not cursed with more requests to help find it, since it supposedly go down with your great-great-granddaddy's ship."

"Well, at least this is a new spin on an old tale." She crossed back to the bench and swung a leg to straddle it. Taking up her needle, she resumed mending the sail. "The St. Claires want to go after the real 'treasure' rather than chase some fool's dream of sunken chests of gold."

"Dat hardly a fool's dream." He swept the air dramatically with his big, callused hand. "Many riches litter da sea floor. Spanish doubloons, precious jewels, and artifacts worth a king's ransom. Or do you forget da thrill of findin' lost booty?"

She sent him a warning glare. "Are you forgetting the pact we made? No more treasure-hunting. Ever."

"Just rememberin' past glory." His dark eyes twinkled. "And a little girl who love to dive for old coins and gold rings."

Bittersweet memories stirred at his words. How exciting the world had seemed back then, with one adventure after another. "I'm not a little girl anymore."

"No. But when it come to findin' lost treasure, you better dan your father ---and people say he was da best."

In Self Defense by Susan R. Sloan
His Forbidden Princess by Jeannie Moon
Bone Island 01 - Ghost Shadow by Heather Graham
Everything Under the Heavens (Silk and Song) by Stabenow, Dana
Secrets of the Lynx by Aimee Thurlo
"All You Zombies-" by Robert A. Heinlein
Blurring the Lines (Men of the Zodiac) by Marisa Cleveland
The Other Child by Lucy Atkins
tales of the latter kingdom 08 - moon dance by pope, christine
Crazy People: The Crazy for You Stories by Jennifer Crusie
Our partner