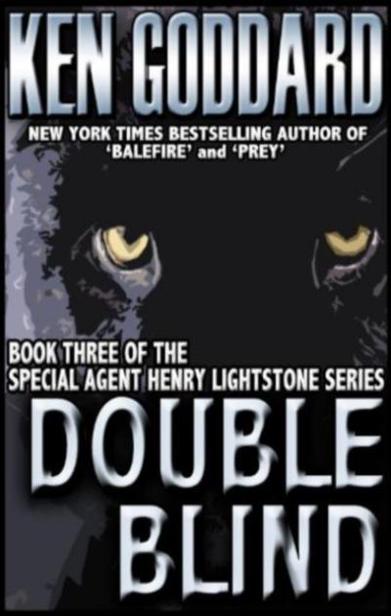 This book is dedicated to the sad passing of two treasured friends, Harold Mays and Dave Siddon . . . and to the joyful arrival of a like soul: dear granddaughter Brittany!

My sincere thanks to Dr. Myrna Milani, who took time out from the exploits of her own fictional StC character to offer a fascinating definition of "cat-ness" … to USFWS Special Agent (Lt. Colonel) Commodore Mann, who provided some chilling insights into the capabilities of an Army Ranger hunter-killer team … and to Elliott, Bucky, and Bob, fellow USFWS employees whose editorial comments are probably best thanked by allowing them to remain cheerfully anonymous.

Double Blind
: a quality control and quality assurance procedure in which none of the people directly involved in the process — the participants or the observers — know the true nature of the system or object being tested.

He was mad, or so they said . . . but others thought only "disturbed."

A loner, and a wanderer.

And in so many other ways, far distant from his present world.

So it was perfectly understandable, and perhaps even predictable, that a thoroughly paranoid, moderately self-sufficient, and quasi-militant group like the Chosen Brigade of the Seventh Seal would accept this ragged outcast into their remote and isolated private community . . . in their continued search for defendable truth and purpose within the boundaries of their determinedly secluded lives.

They liked to talk at length and quote scripture frequently; he listened well. They liked to shoot guns, hunt and guide illegally in the surrounding forests, eat freshly killed game, reload ammo, drink home brew, and talk about putting the government on trial well into the late-evening hours; he abhorred meat, guns, alcohol, and violence of any kind. They talked proudly of owning the donated land upon which their community had been built, and being independent from the big brotherhood of government, but never failed to collect their monthly allotment of food stamps or cash their disability, welfare, and social security checks; he professed no connections to any government data bank. They engaged in carnal activities as often as possible, to maintain their "genetic flow" in peak condition so that they could repopulate the earth following the nuclear holocaust; he embraced celibacy.

The Sage did, however, serve as a willing audience and a welcome diversion. And best of all, he made few demands upon their carefully hoarded resources. They were deeply superstitious by nature, but they sensed that somehow, in some yet undetermined manner, he might serve them well in the coming days.

So they let him stay.

By consensus, of course, and for a predictably self-serving reason: if they were sufficiently patient and minimally generous, this scrawny, scraggly-bearded, hollow-eyed mystic might, someday, give them a glimpse of the inner truth that he so adamantly claimed to see.

So they had hoped for several weeks now.

Which, in retrospect, probably explained why — toward the end of a late-evening council meeting, when all of the adult males gathered in small clusters around a dwindling fire — the men felt startled, but not necessarily surprised, when their resident Sage suddenly began to mumble about the woman.

At first, his soft, slurred, mostly unintelligible words, separated by intermittent periods of silence, attracted little attention. The men had long since grown accustomed to his random efforts at social intercourse, and their conversation flowed easily around his occasional mutterings.

But the Sage persisted, as if driven by a chorus of inner demons to connect — and somehow, to communicate — with his fellow cave-and-cabin-dwelling misfits . . . and suddenly the words began to pour forth as if released from a rapidly breached dam.

In a matter of moments, he held their complete attention.

Much of it consisted of pure rambling, and very little of what was intelligible made any sense. He called himself Tiresius, and claimed he'd been both a rogue and a scoundrel before Hera, the wife of the supreme Greek god Zeus, blinded him and thrust him out into the world to be a messenger — a soothsayer — for those seeking the truth.

That explained his abstinence, and the dark glasses, and the faded white walking stick that never left his side, the council members whispered among themselves. But not the ancient motorbike that provided wobbly, noisy, and smoke-belching transportation for the demented old man.

The irrational, disjointed nonsense poured out of him, yet no one got up and wandered away, as many of the old-timers often did at these usually unfocused and unproductive gatherings. Even when the coals in the fire pit barely glowed, no one dared risk aborting the breathtaking flow of words by doing something so mundane — but possibly distracting — as fetching more wood.

It was as if God Himself had suddenly appeared before the men of the Chosen Brigade of the Seventh Seal to offer His insight into the importance and meaning of their self-imposed isolation.

But there was more.

"The Beast will return," the Sage announced with certainty, referring not to the Soviet Beast, which had given them an excuse to abandon their lives and take to the hills those many years ago, but rather to Bigfoot himself, the creature that virtually everyone in the group except the Sage claimed to have seen at least once . . . but not recently.

"The government is still the enemy," he reminded them again and again. "But not in the same way. It can change before your eyes. Nothing is ever as it seems."

The Sage repeated that phrase often during his rambling discourse.

Nothing is ever as it seems.

"And the woman will come," he insisted time and time again.

"And she will draw the two terrible warriors who lead the forces of darkness and light," he bellowed fiercely, his wild eyes glowing hotter than the dying embers of the fire.

"And when those forces meet, right here" — he pounded the rock-hard soil with a scrawny fist — "the battle you've prayed for all these years will finally begin."

Several of the older men shifted uncomfortably. A lack of exercise and excess of home brew had left most of them overweight and blurry-eyed. Their limited cash flow and dwindling ammunition stocks had long ago reduced their live-fire practice to a few ragged volleys more or less aimed at a handful of tin cans down near the garbage pit every week or so. Their training forays into the surrounding old-growth forest represented nothing more than an excuse to escape the continual harping of the women. And truthfully they hadn't hoped to meet any adversary, much less one driven by the forces of darkness, for years.

They definitely wanted more details about these two terrible warriors, but the Sage returned to the woman again.

"She is the key," he emphasized. "Everything depends upon her arrival."

His sunken eyes bored into those of every man seated around the fire.

"And if she doesn't come, the battle between light and darkness won't occur until the next millennium, and," he added in a deep, foreboding voice, "you must disband and rejoin the outer world."

Then the Sage fell silent, apparently exhausted by his unaccustomed, emotional outpouring. As he fumbled for the canteen at his belt, the elders of the group sat in silence, numbed by the mere thought of going back to the mundane and inglorious existence of their past lives; back to low-paying jobs, unsympathetic bosses, suffocating mortgage payments, nosy neighbors, jackbooted cops, and — worst of all — the women in control again.

Thus it was left to a younger "man" of barely fifteen years to ask the obvious question:

The Sage blinked in momentary confusion, then paused for a long moment, as if gathering the necessary strength to summon the demons one more time. Finally he spoke again in that hoarse and foreboding tone:

"Slender and stealthy, sleek and sensual, warm and alluring, cold and calculating, highly intelligent, a priestess and a whore, and" — he paused long enough to sip from the canteen he brought to his parched lips — "very very dangerous."

The young man considered this for a long moment, then volunteered timidly, "Gee, that sounds just like my cat."

"Of course it does." The Sage nodded his grizzled head slowly up and down as if it were all so perfectly obvious. "Because that's exactly what she is. A cat . . . and a witch as well," he added with a mischievous smile.

A palpable wave of relief swept over those seated around the now dead campfire.

Laughing and clapping each other on the back, the men stumbled to their feet, suddenly aware that they were stiff and cold, and thirsty for a good warming shot of home brew. They were also, to a man, secretly relieved that their resident Sage had turned out to be truly crazy after all.

It was a good story, about the forces of light and darkness being drawn to this sensuous cat-woman/priestess/whore/witch, who would pit these terrible warriors against each other and evoke the Apocalypse. Even better when told by a demented old blind man who could see. Yes, a good story indeed.

But nothing worth taking too seriously.

Feeling in a celebratory mood, they tapped a new keg, poured everyone a generous shot, and a second . . . and went home to bed, comforted by the knowledge that life as they had known it for the past twenty years, a life of dreary, poverty-stricken, and invariably paranoid delusions, would go on as always.

And it did — until the next day, when they awoke and discovered that the woman had appeared.

At precisely 5:45 in the morning, the first flight came in low on the horizon.

Eight glistening figures, flying in a near perfect V-formation and silhouetted against the brightening sky. An increasingly rare sight in the southern marshlands of Jasper County, Oregon.

The eighteen-year-old intern — just completing one of the more miserable hours of her life, crouched down and shivering in the far corner of the concealed duck blind with a heavy shotgun cradled awkwardly in her arms — started to come up from the low wooden bench as she pointed in the direction of the oncoming V, but a cold glare from the imposing white-haired figure seated in the padded center shooting chair warned her back down.

"You stay put, young lady, and keep that shotgun out of sight," Smallsreed ordered as he slowly brought his own intricately engraved and tightly choked auto-loading shotgun up to a ready position. "I can see them just fine."

"My God, Regis, I think they're all cans," Simon Whatley, the congressman's longtime district office manager whispered hoarsely as he lowered his binoculars. "Every damned one of them."

The elusive Holy Grail of the southern Oregon duck hunter.

For a brief moment, every pair of male eyes in the concealed blind — both human and canine — watched in lustful awe as the unbalanced formation of migratory birds announced their approach with intermittent quacks, long necks craning forward as their powerful wings sliced through the chilled morning air in precise, synchronized strokes.

From his crouched position in Lt. Colonel John Rustman's spacious VIP blind, Congressman Regis J. Smallsreed convinced himself that he could actually hear the cold air hissing through the microscopic gaps in the primary feathers of the glistening wings that stroked the air with choreographed precision.

Seconds passed, the soft anticipatory whine of the pair of chocolate Labrador retrievers underscoring the reverential silence that enveloped the occupants of the expensively constructed, below-water-level blind as they each absorbed, in their own way, the richness of the moment.