Read Double Dare (From the Files of Madison Finn, 14) Online

Double Dare (From the Files of Madison Finn, 14) 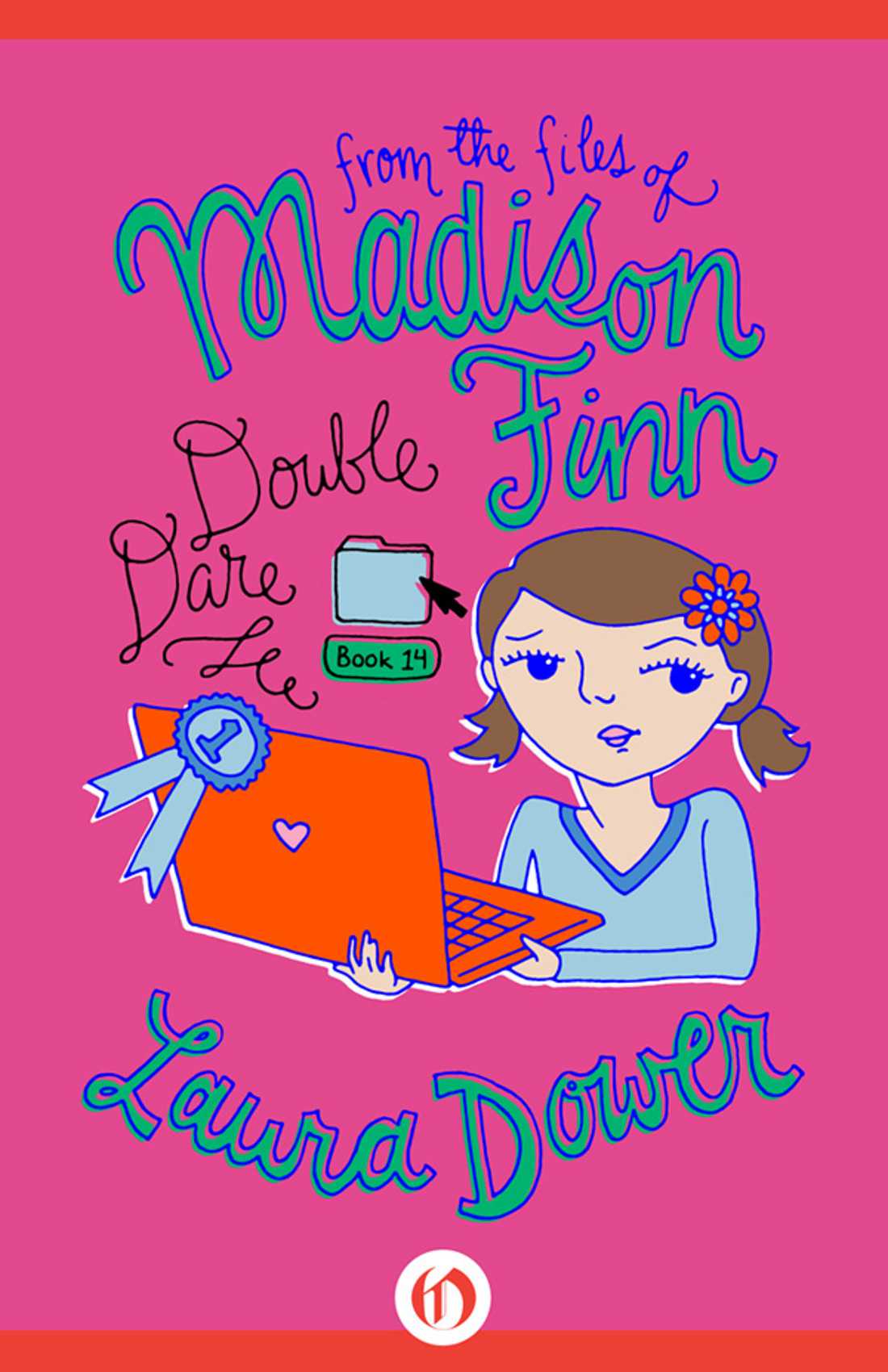 For Nancy, Bryan, and Sarah in memory of John

Preview:
Off the Wall

M
ADISON FINN TWISTED THE
lock on her orange locker and tugged open the door. It was only September, but already books and papers were overflowing onto the floor. Her new American history textbook crashed down with a thud.

“Hey, Finnster!” a voice called out from behind.

Madison turned around to see Hart Jones standing there, smiling. Her heart raced.

Hart had once been the most annoying boy in her life. He had spent half of elementary school chasing her around with worms and other gross stuff. That was when he’d nicknamed her “the Finnster.”

But now that they were both in seventh grade, something had changed. Hart had changed. This year, he was totally crushable. And Madison had fallen—hard—even if he did still call her by the same embarrassing nickname.

“Oops,” Madison mumbled, leaning over to pick up the book. “I didn’t mean to do that.” Her cheeks purpled with embarrassment.

“Hey! Nice one, Maddie,” someone else yelled from behind Hart.

Madison looked up to see her longtime friend Walter “Egg” Diaz leaning against the bank of lockers, mouthing off as usual. Next to him stood Chet Waters, a kid in their class whose family had moved to Far Hills from California the year before. He and Egg had been spending a lot of time together, and Madison had been spending a lot of time with Chet’s twin sister, Fiona. The Waters family lived in a house just around the corner from Madison and her other best friend, Aimee Gillespie.

“Hey, you know what I think?” Egg asked.

Madison groaned. “No one cares what you think, Egg….”

“Yeah, whatever …” Egg cracked. “Well, I don’t care what
you
think, Maddie.” He turned and dragged Chet down the hall.

First period would be starting soon.

Madison thought she saw Hart’s eyes twinkle when he said good-bye. She watched his floppy brown hair bob down the hall.

Thankfully, Fiona and Aimee had not magically appeared to catch Madison at the scene of her crush. Neither BFF knew about Madison’s
true
feelings for Hart. Although her first year of junior high had only just begun, Madison was having trouble figuring out her relationships with boys. The only friends who knew about Madison’s undying love were her pug, Phineas T. Finn, and Bigwheels, her keypal—and both were sworn to secrecy.

Madison had to hurry. Technology class was upstairs, and she had to race to get there before the second bell rang. Quickly, she shoved her books into her bag, which was a super-tight squeeze, considering that she had her laptop computer stuffed in there, too. Madison carried her laptop everywhere these days. Organizing her life in top-secret computer files named for friends, enemies, and everything in between was the best way to keep track of her most private thoughts.

As Madison climbed the stairs and walked into the tech lab, she spied Egg sitting at a desk alongside his other good friend, Drew Maxwell. Egg and Drew glanced over, but without saying a word, Madison took a seat as far away as she could. Luckily, she thought, Hart and Chet weren’t there.

The lab was a brightly lit, open space with yellow walls. Every computer had its own private “station,” with a divider that moved back and forth so kids could work alone or with partners. Mrs. Wing had decorated the classroom bulletin boards with colorful charts and a giant black-and-white poster of Albert Einstein sticking out his tongue. On one wall, she’d posted a list of lab regulations.

And on and on … Despite Mrs. Wing’s long list of more than twenty boring rules, Madison knew that this teacher was one of the coolest in all of seventh grade. In the weeks since school had begun, Madison had felt more comfortable in this class than in any other on her schedule. Mrs. Wing hardly ever raised her voice and she wore interesting jewelry and clothes. Madison always noticed those. Today Mrs. Wing had on an electric-blue scarf and gold bangles that jangled every time she waved her hands in the air.

It wasn’t only the teacher that made Madison love computer class—it was the lab itself. The room was filled with all
new
laptop computers. The year before Madison and her friends arrived, Far Hills Junior High had received a special grant allowing them to purchase equipment, printers, and scanners. They’d even hooked up a high-speed Internet connection and web TV.

As soon as the second bell rang, a kid in the back row named Lance raised his hand.

“We covered keyboarding skills and all that, Mrs. Wing. When do we get to play games?” Lance asked, pointing to his monitor. “Is there a controller?”

Everyone in the room laughed.

“Now, Walter, there is no need for that,” Mrs. Wing interrupted. “The truth is, Lance, that we
are
going to be playing quite a few games here in class. They’re just a little different from games you’re used to playing. But before we start class, I want to call your attention to something else….”

She walked over to a large bulletin board near the classroom exit and pointed to a large sign. Above a photo of a diagrammed computer keyboard, the sign read
COMPUTER CONTEST! DESIGN YOUR OWN WEBPAGE! WIN GREAT PRIZES!

“Now, I realize this is very last minute,” Mrs. Wing said. “But I stumbled across the contest in the newspaper and I just had to tell you about it. I can already see that we have some very talented students who could do very well—even in a rush. I didn’t want you to miss this opportunity.”

The deadline was only two weeks away.

“Design a webpage by the end of September?” a kid in the front row said. “That’s like … totally impossible.”

Egg sat back in his chair and grinned. Madison knew exactly what he was thinking. It was not impossible. Not for him.

“I think some of you could do it!” Mrs. Wing cheered. She read the poster aloud. “‘Web-tastic Media Partners invites junior high school students to enter the seventh annual “I Can Do That!” Computer Contest. Create webpages for prizes! Open to pairs of students in seventh, eighth, and ninth grades.’”

The most exciting part of the contest was the prize list. Madison could read it from where she was sitting.

“Is anyone interested?” Mrs. Wing asked. “It’s a great opportunity for some of you to show off your computer skills. I’d like to see that myself!”

Madison turned her chair around to catch Egg’s eye, but he wasn’t looking in her direction. Drew didn’t see her either, so she turned back to her desk, feet tapping impatiently. Class had only begun, but now Madison could hardly wait for it to be over. She had to speak to Egg—now. She had to get him to enter the contest with her.

Egg had been the first person to show Madison how to use a computer. He was the smarter-than-smart guy who went to computer camp every single summer—and bragged about everything new that he’d learned. With Egg on her side, Madison couldn’t lose—not even with such a tight deadline.

The moment the first bell rang for the next class, Madison leaped out of her seat and stopped Egg before he left the computer lab.

“What for?” Egg groaned. “You were dissing me at the lockers this morning.”

“I was NOT dissing anyone,” Madison said, trying to sound convincing. She moved around the two boys to block their exit route. “I was just goofing around.”

“Look,” Egg continued. “I have to get to science class. Could you move?”

“That contest Mrs. Wing was talking about sure sounds like a lot of fun,” Madison said. “Don’t you think?”

“Well, I thought I’d ask you to be my partner,” Madison said. “It makes sense, right? We’re friends. We always play computers together. We can—”

“Sorry. I already have a partner,” said Egg matter-of-factly.

“Oh,” Madison replied, surprised. She glanced over at Drew.

“Don’t look at me,” Drew said, shaking his head.

“But—” Madison started to say, but she cut herself off. Her insides were squirming.

“So what? It’s not like this contest is a big deal or anything,” Egg said. “Now, would you MOVE?”

“Yeah. No biggie,” Madison said. She stepped out of Egg’s path and let him pass.

“Chill out, Maddie,” Egg added, hurrying out of the lab. “You’ll find another partner.”

“Are you okay?” Drew whispered. “You look a little … weird.”

“I can’t believe he did that,” Madison said.

They stood there in silence for a few moments. Then Madison got an idea.

“Drew?” Madison asked. “I know I just asked Egg to be my partner and you were standing right here … and it’s probably not too cool to be asking you second and not first … but do
you
have a partner for the contest?”

“You do?” Madison gasped. She wanted to take back the question immediately.

“The thing is … we saw the contest posted up there yesterday,” Drew admitted. “Me, Egg, and Chet. And those guys paired up right away, so I went ahead and asked this guy from my English class if he wanted—”

“Whatever,” Madison said, picking up her orange bag. “I don’t care.”

“Whatever,” Madison said again. His responses sounded like Egg’s. Boys were all the same: LAME. Madison slunk out of the lab. She wondered if Egg and Drew’s actions had given
her
bad karma for the contest?

She’d been rejected twice—and it wasn’t even lunch yet.

“Well, Egg is just being a wiener,” Aimee said when Madison spoke with her that night. Madison was sleeping over at Aimee’s house for the week while her mom was away on a business trip in Paris, France. She produced documentaries for her company, Budge Films, and was always busier than busy.