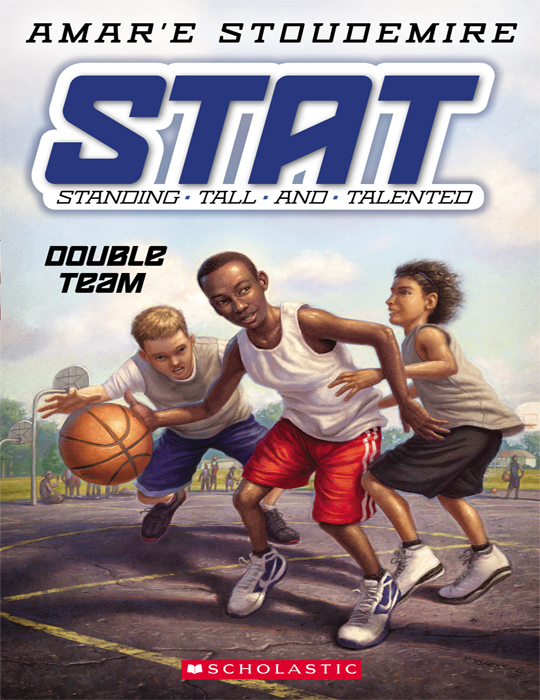 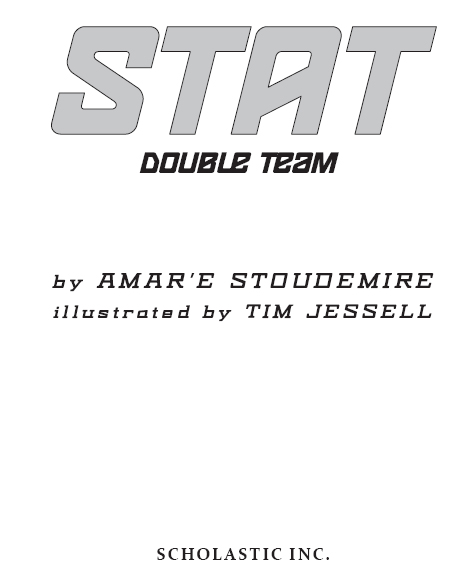 To my family, my mother, and Hazell.
You are my inspirations.

I
knew this move so well that I was on autopilot as soon as I took that first step. I made a quick shift to my right, rose up as high as I could, and â¦ put my socks away in the top drawer. The clean ones anyway. The dirty ones went in the laundry basket, over a layer of underwear and other stuff that definitely needed to be covered up.

It was Saturday morning. I'd just gotten back to Lake Wales the night before, too late to worry about this kind of stuff. Now I was moving around my room, putting stuff away and checking for any signs that Dad had been poking through my things while I was gone. I didn't expect to find any. Pops trusted me, and I trusted him.

I wasn't as sure about Junior. We were tight, but I'd caught him playing one of my video games or scuffing up a new ball of mine more than once. I didn't have to worry about that this time because he had gone on the trip with me. We had gone to visit our mom and our half brother, up in New York.

It was always nice to see Mom â I missed her a lot â and my little bro was getting so big. He was a little man now! But it was nice to be back in my hometown of Florida, too. I walked around my bed and over to my desk, sorting through the books in my hands instead of looking where I was going. I didn't need to look: Everything was just where I left it.

I heard three loud knocks on the front door just as I was hanging up my new shirt that I had bought in New York. I knew that sound. It was my friend Mike, rapping on the side of the door. Before I even reached the kitchen, I knew Deuce would be standing next to him. I opened the door and sure enough, there they were.

“Change into some shorts,” said Deuce. “We need to practice!”

He was holding a basketball, as usual. He dribbled it three quick times to make his point:
Bomp! Bomp! Bomp!

I was just joking. The sound of the ball bouncing on the walkway was all the hello I needed. I let them into the kitchen while I went to change into shorts and sneakers and get my ball. I'd missed playing ball with my friends while I was away. Junior and I hit the courts a few times, but our half brother was still really young. When Mom said, “Why don't you play some hoops with your little brother?” she really meant “Why don't you watch him while I go to the supermarket?”

I got the shorts out of the laundry pile because I was just going to sweat them up anyway.

We left the house and started walking toward our regular court, in the little town park near my house.

“House was pretty quiet. Was your dad home?” Deuce asked.

“Nah,” I said. “It's his busiest time of year at work. He's hardly home at all. That's why it was a good time to visit New York.” 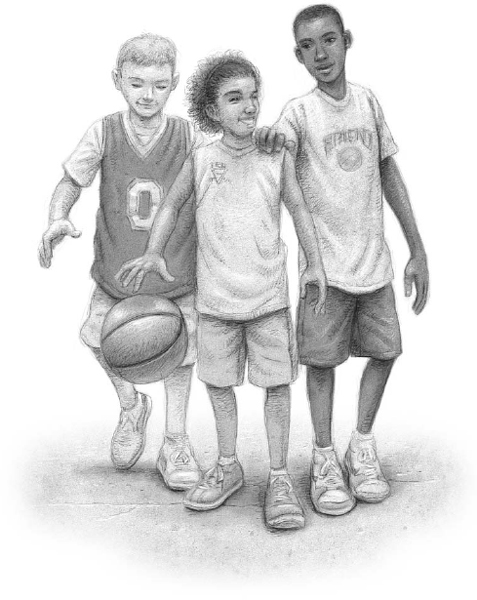 “Already at work,” I said. “He's got a job now, weekends and after school. Think he's saving up for a new car.”

“That's cool. Too bad he won't have it in time for next weekend,” Deuce said.

“He could drive us to the next tournament,” said Deuce.

“There's another tourney?” I said.

“Yeah,” said Mike. “And we might've, you know, gone ahead and signed you up.”

We took all the hometown shortcuts and reached the court in no time flat. We had the place to ourselves when we got there, so we spread out and took our time warming up. The hoop on one end of the court was bent, so I turned and headed toward the other one.

He didn't have a ball. He was waiting for one of us to shoot so he could swoop in and scoop up the rebound. I took a few more dribbles and picked up my pace. Then
I rose up and launched a fadeaway jumper, pretending someone was on me tight. “Swish!”

That was my favorite move.

“You guys remember when Carlos and his crew tried to take over this court?” I said.

A few weeks ago, some older guys had come around and tried to kick us off our own home court. We played a big game to see who'd get to stay.

“'Course!” said Mike. “We wouldn't have won if it wasn't for that pick-and-roll you two pulled off at the end.”

“Yeah, that was sweet,” said Deuce. “But we need to keep working. These tourney teams can definitely play some D. And the one this weekend is the toughest yet.”

“Yeah, right,” said Deuce, doing a quick, slick crossover dribble as he talked. “You barely even signed up for that first tournament.”

I had him there. But Deuce was right, too. The teams we were playing now definitely knew their stuff.
Whatever play we ran, they'd seen it before. And it sounded like the teams this weekend were going to be even better.

“All right, let's do this!” I said, clapping my hands twice.

I saw another kid edging onto the court. Deuce held the ball and we all turned toward this guy. He looked familiar. He was tall and thin and had a little forward lean to him, like a bendy straw. Then I remembered where I'd seen him. He was the new kid in our grade at school.

Yeah, that was his name: Dougie. Deuce gave him a little wave and he waved back. Then he headed over to where we were standing near the free throw line.

He had this complicated handshake that was like: bump fists, hook fingertips together, up tap, down tap, and another fist bump. I was surprised when Mike and Deuce both knew it. He turned to me last. His hand was out, ready for the fist bump, but I just nodded. I hadn't caught all of the parts to their handshake, and
anyway that wasn't the kind of move I came here to work on.

Mike must've figured out what I was thinking because he said, “Dougie's been practicing with us while you were away. He's a good guy.”

“I know,” I said. We both smiled, but I still didn't shake his hand. I wasn't being mean: I still had no idea of the order!

Anyway, there were four of us now. I thought we should keep working on the pick-and-roll, with defenders on both players like in a real game. It got even more complicated with all that traffic coming together at one spot. But they all wanted to run two-on-two right away.

“Yeah, come on, STAT,” said Deuce. “We worked on all that stuff the whole time you were gone.”

That didn't help me much
, I wanted to say, but I didn't mind playing two-on-two. I kind of wanted to see what Dougie could do other than bump fists. I'd get a close look, too, because he wound up being my teammate.

“He's a pretty good distributor,” said Deuce, meaning he was a guard.

“Why do they call you STAT?” Dougie asked as we waited for Mike and Deuce to line up and check the ball back to us.

“It's kind of a nickname,” I said. “My dad gave it to me. It means Standing Tall and Talented. It's, like, part nickname and part reminder.”

Dougie played with the same forward lean he had when he walked. His head was always a little in front of his body. It made him look kind of like he was trying to read an eye chart, but it gave him a wicked head fake. Deuce bit on one right off the bat, and Dougie snuck by him and laid it in to give us an early lead.

We were playing make it, take it, because the trash talk was better that way, and I scored the next bucket. I got decent position down low. Then Dougie bounced the ball to me and I worked Mike over with a quick up-and-under move. It was harder than usual because of Mike's new size. He'd grown a lot in the last few
months, though most of it was sideways. Just like that, we were up 2â0.

It was a pretty good game after that. Mike and Deuce pulled out all the stuff they'd been working on while I was gone â and Deuce stopped biting on that head fake. So the game got better, but the outcome didn't change. That two-point lead grew to three and then four. We didn't even know what we were playing to, but we knew where this one was headed.

After a while, I drained a jumper to make it 8â4. It was a fadeaway jumper that I didn't even need to fade away on: Mike wasn't on me that tight to begin with.

“Too easy,” I said. And no offense to anyone â Mike and Deuce were my best friends, and they played hard â this is just the way we talked when we played.

“Let's switch 'em up after this,” said Deuce.

It wasn't 8â4 because of Dougie. He was all right, but he was kind of an in-between player. He was a little slow for a guard and pretty skinny for anything else. I guess being away for a week made it a little easier for me to see what was going on. Yeah, we were all getting better. We
could run pick-and-rolls and baseline screens and half a dozen other things. But I was getting, well,
betterer
. That wasn't a real word, but it was still a fact.

Dougie and I ran a pick-and-roll of our own that forced our defenders to switch off. Mike was covering Dougie now: no real advantage there. But Deuce didn't have the height to cover me. I rose up and drained a jump shot I didn't even need to jump on.

And from the way he said it, I knew it wasn't just trash talk. He had meant it.

9781618850638IfOnlyYouKnewBergman by Unknown
Another Governess / The Least Blacksmith: A Diptych by Joanna Ruocco
The Queen's Tale by Grace D'Otare
Seven Day Seduction by Emma Shortt
A House in the Sky by Amanda Lindhout
The Magpies Nest by Isabel Paterson
Star Hunters by Clayton, Jo;
Moonlight Warriors: A Tale of Two Hit Men by Joseph Rogers
Everybody Falls by J. A. Hornbuckle
The Imjin War by Samuel Hawley
Our partner