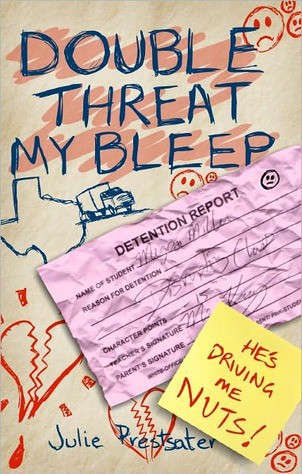 For the fans of
So I’m A Double Threat
who have expressed a sincere interest in seeing what comes next for Meggie and Alex. You’re support and enthusiasm was just the encouragement I needed.

Thank you so much for the inspiration.

A special thanks to Matt Ford, Jurnee Mroczek, & Gabriel Quesada for bringing life to my characters. I can’t write a thing in Double Time without imagining the way Alex (Gabriel) and Meggie (Jurnee) looked into each others’ eyes. It was magic. ::dreamy sigh::

“Meeeeeg,”
my mom yells from down the hall, “Keeeeeesha, Stephanieee. Dominic is here. Are you ladies ready?”

“Yeah Ma,” I yell back. “Tell him we’ll be right out.” I look at Keesh who’s brushing on some lip gloss in front of my closet mirror. “You guys taking a purse?”

“Nah…I just got my money in my pocket,” Steph responds, shaking her head and patting the left pocket of her jeans.

“Neither am I,” Keesha says, “we just need some cash and lip stick. What do we need to take a purse for?”

They’re right. I dump out my bag on my bed and sift through the contents to find my Chapstick. I push it down the back pocket of my jeans along with a few bucks, just in case we decide to grab something to eat after the party.

“Crap…now we gotta carry our cells,” I whine as we walk down the hall toward the front door of my house. I hate the feel and look of a bulging cell phone in a tight pair of jeans, so now I’m stuck with it in my hand for the rest of the night.

“You’ll live,” Keesh says, grinning as she opens the door.

Steph peeks her head in on my mom, who’s watching TV in the family room. “Thanks mom,” she says.

The door shuts behind us as we greet the guys in Dominic’s mom’s car. Great. No van today. Now my plan to sit in the back and ignore my friends is out of the question.

I stop for a minute, look at all of them, and it hits me.

I don’t know if I can do this.

This doesn’t feel right. I feel the tears well up in my eyes.

How can I go tonight?

How can I go to a party…without him?

Keesh squishes in the backseat with Jonathan and Josh.

Steph plops herself down in the front and slams the door. The window glides down. “Meg…come on. What are you waiting for?”

For Alex, I want to say. But that won’t work.

I’d have to wait a long time.

Like an hour if he took a plane, not including driving time to and from the airport.

Like five hours and fifty five minutes of driving. I’m not exaggerating either. I MapQuested it. It would seriously take five dang freeways for him to come home.

Keesh steps out of the car and walks over to me. “Let’s go,” she says quietly, putting her hands on my shoulders and guiding me to the car. Jonathan gets out and wraps his long skinny arms around me for a hug. I don’t even lift my arms to accept his embrace. He eventually releases me, with one last squeeze. I give up. I slide in the backseat, Keesh scoots in next to me, and Jonathan follows. Josh throws his arm over my shoulder and squeezes me too. Does it look like a hug is going to cure me?

This end-of-the-summer party is not going to be like last year’s. That’s for sure.

I can still remember feeling so nervous by the thought of seeing Alex at that party. I felt like I was going to throw up the whole way there. But then he talked to me. He made me feel like I mattered to him. Now, instead of feeling giddy, I feel deserted.

I try to clear my mind from my stroll down memory lane. Keesh and Steph are babbling about something, but I miss the whole conversation. I have no idea what they’re chatting away about.

“Where’s Erica?” I ask Josh, feeling better I won’t be a loner after all.

“Oh, she’s gonna meet us there,” he says. “She had class today. So did Vanessa, so Ben’s gonna pick them up and they’re all going to meet up with us later.” Well I guess I can forget that idea. I’m a loner.

We pull up to the party and spill out of the car. Don’t I feel like the idiot. All my friends are going to be here with their significant others, and I’m going to be here…alone. This blows.

Do I have a choice?

They set off toward the party and I’m standing here.

“Yeah, what the hell.” It’s not like I have any other appealing options. “Let’s get this crap over with.”

It’s the same ol’, same ol’. A crap load of teenagers crammed into a small living room that’s musty as heck, each with the classic red plastic cup in their hands. If I had my doubts last year, I don’t this time. I know they all have their cheap beer concealed in the purposely opaque container.

Steph doesn’t waste any time pushing through bodies to get to the backyard.

I feel like I’m repeating last year. Only this time, I have a different kind of nervousness.

Dominic takes the lead and points us in the direction of some empty folding chairs. The girls sit down. He leaves for a minute, but is back carrying a table over his head. He’s so giant, he lifts it like it’s a piece of foam furniture and sets it down in front of us.

“Thanks babe,” Steph tells him as she tosses her cell down. She stands up and he takes her place in the chair. She plops herself down in his lap and he rests his hands on her thighs. She leans back into him and he delivers a quick peck on her lips. She smiles.

I fight the urge to scream. Or cry. Or gag. Why do they have to be so freakin’ cute? Ugh.

Keesh and Jonathan make me feel a little bit better. They’re anything but affectionate. Jonathan is trying to push her out of her chair. “Get up girl, let your man sit down,” he says in a sarcastic tone.

“Jonathan, you want me to beat your ass right here in front of everyone?” she asks, with a sly grin on her face, holding him back with one hand. She’s joking. I know. But if he keeps pushing her, he might catch an uppercut in his gut.

He gives up and stands behind her with his hands on her shoulders. I can almost hear her thoughts,
Good boy.

Josh stumbles toward us loaded down with beers.

“Who wants one?” he asks, placing four red cups on the table. Jonathan and Keesha take one. Josh picks up another.

What the hell? I pick up the last one and hold it up. “Let’s party,” I say, rolling my eyes. I raise the cup to my lips to take a sip and my cell beeps.

Holy shit. I fumble with my cup, spilling beer all over my hands. I separate my legs quickly enough so it doesn’t drip all over my jeans.

I place the cup on the table and wedge my phone out of the front pocket of my tight-ass jeans.

I flip it open.

u hvn a good time?

I don’t want to be too pathetic. He knows I miss him. He knows I didn’t want to come to this party. If he hadn’t given me an hour long pep talk, I’d probably still be at home with my mom, watching a recording of New Kids On The Block on the Today Show for the five millionth time.

I keep my phone out, waiting for a text back. I notice my friends starting to disappear. I scan the party. Keesh and Jonathan are dancing. Dominic and Steph are raiding the food table.

have fun 2nite. cll me whn u get home.

I smile at my phone. I want to go home. The sooner I can hear Alex’s voice, the better. Have fun…psshhh. I’ll have fun when I get home and call him. That’s my idea of a party now.

Josh gets up and struts away. Where’s he going? He’s a loner like me until Erica gets here.

I hit REPLY to text Alex back.

“Hey Megan, whatcha up to girl?” I hear coming from behind me. I look back to see pissy ass Travis lurking behind me. This guy seriously bugs. If I don’t answer, maybe he will go away.

“Meg, babe.” No such luck. He plops himself down in the chair next to me. “So who you texting?” He huddles in close trying to get a peek at my phone. “Wait…don’t tell me…are you seriously going to be that chick at the party all year, sitting alone in the corner, while your man is hitting on anything who walks at some college party full of tits?”

I slap my phone shut.

“Seriously, I’m pretty sure you don’t know what the hell you’re talking about. But what I do know is you’re most likely gonna be that guy at every party, sitting in a corner all alone because no one will give you the time of day,” I snap back at him. “Now, if you don’t mind, why don’t you move along to someone who might actually want to talk to your dumb ass.”

“Uh, I’m pretty sure Megan just told you to get lost.” Ben interrupts, pounding his hands down on Travis’s shoulders. He lunges forward with the force, and stands up quickly, puffing out his chest.

Travis shakes his head with a chuckle. “Catch you later, Meg.” He grins. Before he gets out of earshot, he turns around and shouts, “Hey Ben, did Alex pay you to watch out for his girl, or are you that much of a loser you’re hittin’ up high school parties still?”

Before Ben can respond, Travis is gone.

I throw my hands in the air. “What the heck is up with that guy?” I lean back in my chair, exhausted by the confrontation.

“He needs to get a life. I’m not gonna put up with his stupid shit all year.”

Ben plops himself down in the chair just like Travis did.

“He’ll get over it eventually, or he’ll find someone else to torture,” he says, with a chuckle. “Or…I’ll just kick his ass.”

“No ass kicking please,” I reply. I take a quick sip of my beer. “I talked to him once at a party and now he thinks we’re soul mates. Can you imagine what he’d think if I actually hooked up with him?” I laugh.