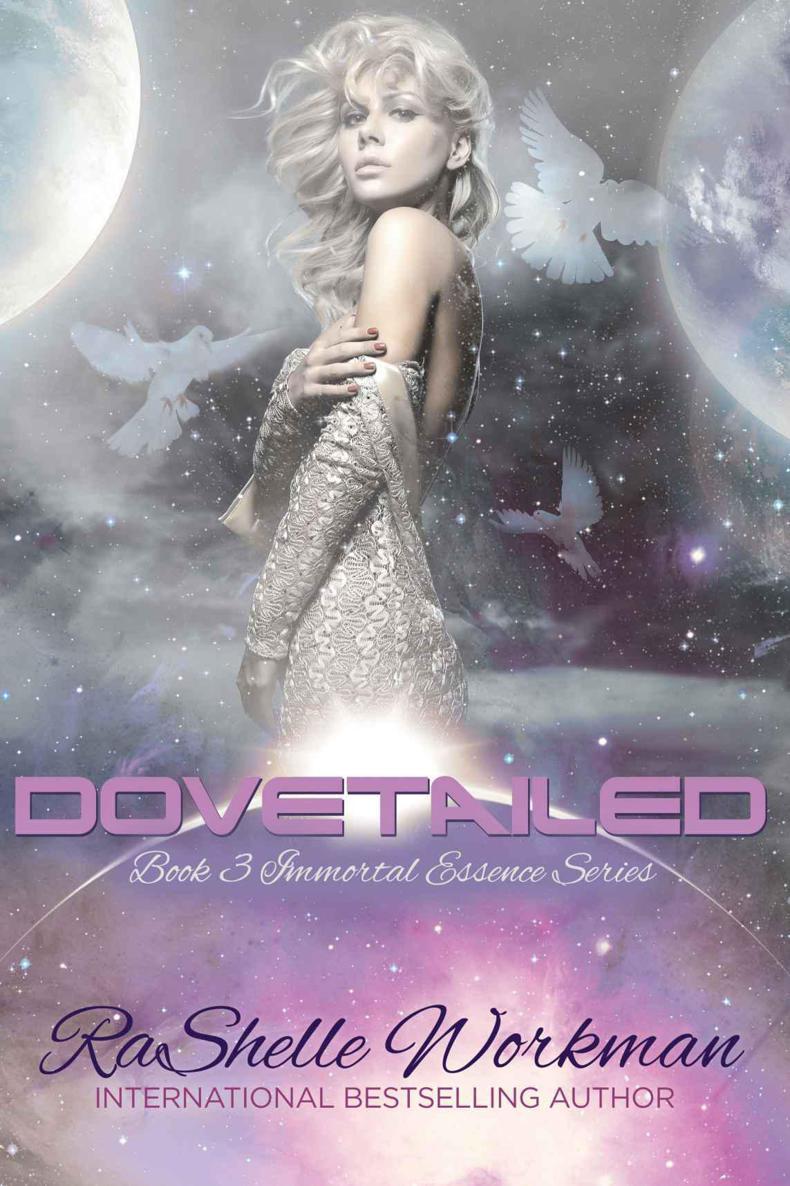 Worlds divided them. Chance brought them together. Only love will save them.

This book is a work of fiction. Names, characters, places and incidents either are products of the author’s imagination or are used fictitiously. Any resemblance to actual events, locales or persons, living or dead, is entirely coincidental.

No part of this book can be reproduced in any form or by electronic or mechanical means including information storage and retrieval systems, without the express written permission of the author. The only exception is by a reviewer who may quote short excerpts in a review.

Find RaShelle Workman on the web!

In the final installment of the Immortal Essence series questions are answered, alliances are ripped apart, and the war on Kelari rages between more than just families and countries. Venus must find a way to bring peace to her world before the war finds its way to Earth and she must do so without destroying the one person she’s ever truly loved.

The book was filled with adventure, secrets, and romance, keeping the reader on the edge of their seat.” by LM Preston.

“I . . . felt like I was literally out of this world for a while.” by Melissa Lemon.

“Loved it from the first page and was thrilled to be reading something so richly creative and engaging.” by Tahlia Newland.

“It’s in Michael’s and Venus’ darkest hours that you can’t put the book down.” by Brenda Drake

“The twists and turns left me breathless and the writing is beautiful.” by Taryn Taylor.

“I liked the way things were described, along with the dialogue.” by The Golden Eagle.

“What a ride!” by Taffy Lovell.

“I love a book where the details fit together like pieces in a puzzle . . . “ by Rachel Morgan.

“I fell hard for her characters and found my self rooting for them.” by Debbie Davis.

“Her journey and struggle capture the imagination long after the story ends.” by Rosie Connolly.

“RaShelle does a wonderful job of creating the angst we all feel when life hands us lemons.” by Gail.

“Writing that moves readers to ponder their hearts is good writing, and that’s what readers will find with Workman. She’s a dedicated writer, talented, and passionate. Readers won’t be disappointed. Her protagonist is strong willed, her antagonist is easy to hate, and her mentor is easy to love.” by Kathleen Brebes.

“Michael and Venus have probably been the best pairing/couple that I’ve read about this year! GO READ THIS BOOK! You will
love
it.” by Nancy.

“I enjoyed the atypical love triangle-- one that didn’t throw me into extreme frustration-- and the idea that love is deeper than just physical feelings.” by Shallee McArthur.

“Truly, at its heart, this is a romance, and a well written and enjoyable one at that. For me, that says something. I’m not a huge romance fan, but this story sucked me in so much that I found myself looking for a spare moment ANYWHERE to read.” by Karen Hooper, author of the award-winning Woldchild Saga.

Thank you for your patience, and for loving an alien girl who thinks she’s a princess…

And most especially, thank you for reading my books.

“The Order of Eternal Fire has done what it set out to do. As a whole, we’ve weakened our enemies.” He paused, glanced at the leader of Eloyinia, and smiled. She was beyond beautiful, with midnight blue eyes and hair the colors of twilight. She wore her long hair up, a large black diamond crown situated in the colorful waves. The queen met his gaze and smiled. They’d come to an accord some years ago after her husband vanished.

Of course, she and King Antyon knew what truly became of her husband. He’d been killed by a Leviathan, the first of many to die by the creature’s poison. King Antyon had then taken Irene, the Queen of Eloyinia, as a lover. He enjoyed spending time with her more than with his wife, Listina. Irene reciprocated his feelings. And Listina, his queen? She spent most days in her room, rarely leaving the confines of her bed. Poor, stupid thing. He had no time for the weak.

Turning back to the crowd, the king continued, “We are forcing them to see what we are about, and showing them a new way. Our way.” He surveyed the cheering crowd stuffed into his castle’s ballroom. Parties were a waste. The room was now his headquarters. There were hundreds of Order members, all willing to fight for what he believed—what they believed in—and that was to end immortality, the immortal boots, and becoming Kelvieri at the age of sixteen—except for a select few, like himself, and those he deemed worthy.

The deaths of the King and Queen of Alayeah and the disappearance of Venus and Amberlee led to the perfect opportunity to do what was necessary—what needed to be done.

Kelari was at war. Most of the leaders were on his side. Some had already come to his way of thinking willingly, others, not so much. And they’d paid the price with their lives until the right leader was crowned.

“It’s time to take our beliefs and infuse them into those who won’t listen. The time is now to take this war to the next level. Who’s with me?” He lifted his arm into the air, beckoning for the battle cry he knew would come.

His followers roared their response.

“We will crush those who don’t believe and make them see there is no future except the one we will create.” Only a couple of his followers currently knew what the next level was, but he was about to show them all.

Turning to his second in command, a Formytian by the name of Guster, King Antyon said, “It’s time.” The guardian was tall and towered over the king, rippling muscles enhancing his dark skin.

Guster’s keen red eyes glowed their understanding. He saluted the king, pressing a fist to his chest, and left the room.

King Antyon raised his hands, indicating quiet. A gurgle of excited apprehension rumbled in his chest. This was the moment he’d been awaiting for a long time.

As the crowd slowly silenced, he scanned the room above their heads. His newest soldiers would fit, but barely. Discovering the race of Leviathans fifty years ago had been a stroke of luck, but the race were a lot like the Dorvey from Mars. They were big and bumbling, but fierce. What the Leviathan race possessed that was different from the Dorvey was a weaker disposition. They could be modified, their minds easy to overtake. With a little science, a little genetic tampering, his team of scientists had taken the Leviathan race and changed them into what the king needed, which was a horde of warriors with a singular purpose: Destroy those in their path. The beauty of the Leviathans was that it didn’t matter that the Kelvieri were immortal. The poison in the Leviathans’ very skin was deadly to every Kelarian, every creature they came in contact with.

They were the ultimate killing machines. Nothing could stop them.

And the king wouldn’t stand in their way. He would release the Leviathan army on Kelari and sit back and watch as everyone was destroyed. Then he would take those who remained and rebuild. He would be the god of Kelari. His laws would be all that mattered. He would rule supreme.

And after he finished on Kelari, he would move on to Earth. He knew it seemed an odd second step to those around him, but he’d come upon the key that unlocked a doorway between worlds. It was illogical not to use it, and Earth was a beautiful world. The humans who possessed it were weak, but he knew they could become his citizens. They’d be easily swayed, much more easily than the Leviathans. He would use them in any way he pleased, and they would beg him to lead.

Guster reappeared. Behind him, seemingly floating like a helium balloon, glided the terrifying form of a Leviathan. Dozens of tentacles swirled around the large circular blob that consisted of one yellow eye and a large mouth full of pointed razor-sharp teeth. It smelled like it looked … like puke and rotting flesh.

A collective gasp rose from the crowd. Irene came to stand beside King Antyon. He guessed she didn’t want to get caught in its tentacles. Another reason he liked her. She was tougher than most, and smarter.

Several members of the group backed up, moving away from the Leviathan, which was the exact response King Antyon wanted.

“This is a Leviathan. They are from the planet Evyth and can destroy even the Kelvieri. Immortality means nothing to this species.”

Voices rose and the crowd started talking quickly to each other. Many backed up, edging closer to the doors. The Leviathan’s eye roamed the room, scoping for a potential meal.

Tigress for Two by Dobson, Marissa
Murder in Halruaa by Meyers, Richard
Demon's Vow: Part 2 of the Final Asylum Tales (The Asylum Tales series) by Drake, Jocelynn
Kristin Lavransdatter by Undset, Sigrid
A Way Through the Sea by Robert Elmer
Alternity by Mari Mancusi
Pandora Gets Angry by Carolyn Hennesy
Krymzyn (The Journals of Krymzyn Book 1) by BC Powell
Shoe Dog by Phil Knight
Uncommon Romance by Belle, Jove
Our partner