Read Down the Road: The Fall of Austin Online

Down the Road: The Fall of Austin 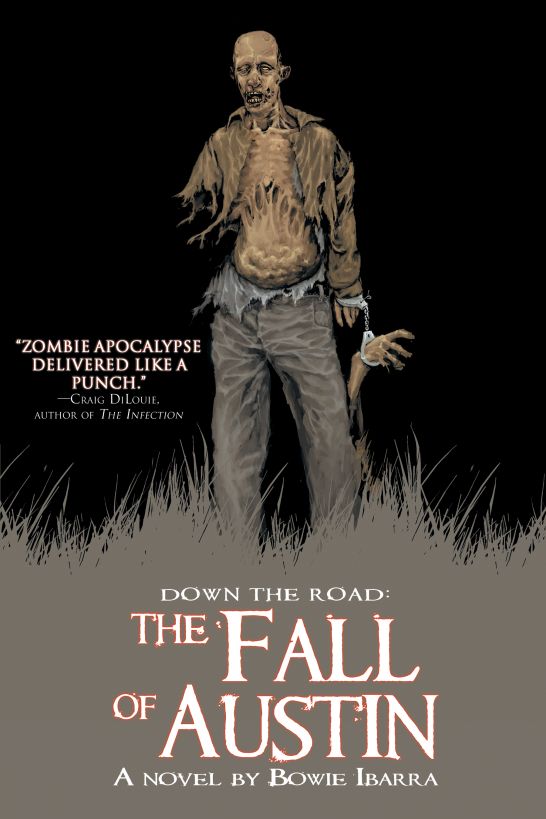 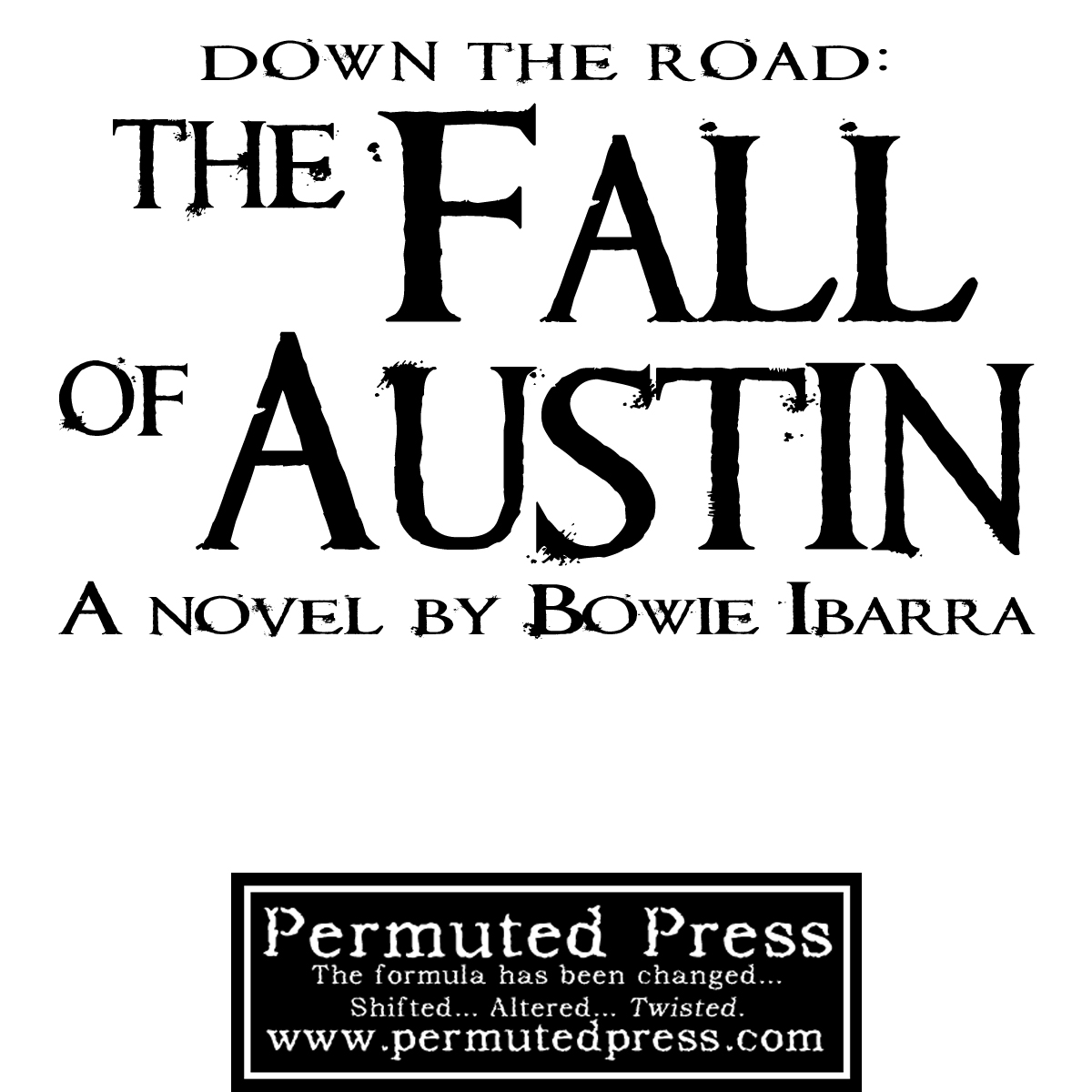 Down the Road: The Fall of Austin

This book is dedicated to Travis Adkins,
whose encouragement and skill has helped me make my mark in the
Zombieverse. Thank you for your support.

To Jacob Kier and the boys and girls at
Permuted Press: Thanks for giving my stories a chance.

Special thanks to the Austin Police
Department and the Travis County Jail.

To Daniel “Bo” Woodman. I envy your
imagination and wit. Thanks for your attention to details in
editing the story.

And eternal thanks to George A. Romero. Thank
you for your inspiration and your cinematic works. People are
walking as zombies en masse and even dancing as zombies around the
world because of your works.

And to you, the reader: Thank you for giving
my story a chance as well. I hope you enjoy it.

Back alley near 6th Street

“You got the goods?” asked the man wearing
the Dallas Cowboys hat. His voice echoed down the dark alley as the
various clubs and bars of Austin’s Sixth Street pounded out their
club vibe through expensive speakers.

“Why you ask me that,
gringo
?” replied
the muscular and heavily tattooed Hispanic man standing by a large
delivery truck labeled with the Grandma Smith’s Garden label.
Grandma Smith was holding a basket of vegetables as if she had just
made a trip to the garden in her backyard.

Knitting needles jutted out from the bun in
her hair. Her image was an awkward contrast to the three goons
sporting fashionable AK-47s as accessories, complementing their
scarred, mustachioed faces.

“You have my cabbage?” asked the muscle man.
The euphemism was not an attempt at humor, though Grandma Smith
continued to smile despite the sour faces all around her.

Mr. Dallas Cowboys Hat pointed to his
partner, who was standing next to him with two large briefcases.
The briefcases were handcuffed to his wrists, signaling the
dangerous importance of their contents.

“Open it,” demanded the large thug.

Mr. Dallas Cowboys Hat lifted one of the
briefcases and pulled out a set of keys from the sleeve of his
Starter Cowboys jacket. The thug eyed the keys curiously with eyes
accustomed to taking in details, to observing the people and the
world around him. Considering the merchandise they were dealing
with, he had learned to observe everything. Even the slightest
glance, shake or eye movement could give a person away. So far, the
man could pick up nothing suspicious from Mr. Dallas Cowboys Hat
and his partner.

Mr. Dallas Cowboys Hat opened the case,
revealing stacks of hundred dollar bills wrapped in clean bank
wrappers. In a show of trust, Cowboy threw a huge stack of
Benjamins at the thug. The move might have been considered a bit
arrogant, a subtle gesture of aggression, of territorial
reclamation. Despite the very tense atmosphere, the thug chose to
ignore the fact the move might have been an attack. This was a
chess game, to be certain. Specific moves and protocol prevailed.
But in his mind he vowed he would not let such an act go unanswered
a second time.

Instead, he gave another command, laced with
hints of a dare. A dare to defy him. A dare not to listen to him.
“Open the truck up for me.” He whistled, calling forth his pawns to
counter the possible attack, the play of subtle defiance from the
black knight, or bishop. He directed his men to the rear of the
vehicle, holding the thick stack of cash in his hand as he pointed,
as if to show the location of more money like that which he held in
his hand, an evil wizard controlling his minions through greed.

Mr. Dallas Cowboys Hat re-secured the
briefcase and walked to the

Behind Grandma Smith’s grand matriarchal
smile, in the interior of the vegetable truck, stood several crates
of spinach and beets. Upon closer inspection, the spinach and beets
were two days short of being rotten. A thug took the crates in
front and stacked them on either side, out of the way. Eventually a
path was cut to the back of the vehicle. The thug picked up a box
filled with several bags of white powder hiding in the rear and
brought it to Mr. Dallas Cowboys Hat.

The thug had fulfilled his part of the deal.
It was now time for him to

Mr. Dallas Cowboys Hat began to free his
partner from the heavy bonds around his wrists, unlocking them as
the thug said, “I did my part. Now it’s your turn, holmes, to do
your part.”

Mr. Dallas Cowboys Hat and the thug turned
and looked at the man who held the suitcases, who was now shaking
his head in frightful confusion.

“What part?” asked the man holding the
suitcases.

The thug chuckled, realizing the man had no
idea of his fate. “Thanks for the money, holmes,” he said, mocking
the once-bonded man, watching Mr. Dallas Cowboys Hat remove a gun
from his holster. Before his partner could react, he fired three
shots from his pistol. His partner fell to the ground, hitting the
worn and pockmarked pavement face first. Blood began to soak the
dirt and water on the pavement near the belly of the dead
money-man.

“Nice one, holmes,” the thug said, taking the
briefcases. “Nothing like killing your own friend so I could trust
you, eh?” One of his henchmen brought him the keys to the
truck.

In one swift movement, a small squad of
policemen jumped from the back door of one of the clubs. The alley
had enough shadows at night for the inconspicuous surveillance
cameras to go undetected. They were set up on the brick walls along
the dank backstreet. The entire scene had unfolded before the
cameras, viewed by the police from the safety of the club’s back
room.

The policemen surrounded the tattooed gang
members. The gang was outnumbered three to one, and only two of the
thugs offered resistance. Both of them were gunned down with clean
shots to the head.

With a quiet cool smile, the thugs’ leader
dropped the suitcases and put his hands behind his head. It was
something he had done multiple times since his youth. Nothing
new.

From the ground, the murdered partner was
rising. Sitting on his rear, he pointed a pistol at the thug.

“Face the truck and drop to your knees,” he
said, standing.

The thug did, chuckling, and fell to his
knees with his hands across the back of his head.

“My name’s Mike,” said the man wearing the
Dallas Cowboys hat. “Mike Runyard. And thank you.”

“I know who you are,” Mike said, training his
gun on him while his partner removed the blood packs hidden under
his clothes and threw them on the ground. “You’re Hector ‘Sleepy’
Arana. You’re a big part of the MS-13 problem we’ve been having
here in town.”

“And we just bagged you, shithead,” said the
fake and bloodied partner, taking each of Sleepy’s wrists and
placing them in handcuffs.

“Well, one thing I know, holmes,” Hector
‘Sleepy’ Arana said with pride, “What goes around comes around. You
know?”

Within hours, the gangs were processed and
their tattoos were photographed and documented before they were put
up in the highest security section of the jail.

Two jail guards led Hector ‘Sleepy’ Arana to
his temporary holding cell. The amount of cocaine in the truck
easily amounted to a federal violation, and within the next few
days he would likewise be transported to a federal prison.

The inmates in the cell block did not take
kindly to his presence. Insults and threats were hurled with the
confidence and skill of an opera tenor delivering a solo to a
captive audience at the Metropolitan Opera. The words flew out so
easily it was clear they were simply part of a daily ritual of
initiation to the new meat.

Hector ‘Sleepy’ Arana was a street king in
Austin, a drug runner of the highest order who had the power to get
things done with a snap of his fingers. And everything he wanted
done always got done with a cruel

efficiency. But in prison, any and all power
and influence he had before was lost. Despite his confidence and
his strengths and allegiances outside of prison, he was just a
lowly new entry into the barred and concrete cages. His power was
in his words, so he proceeded to put them to work with the guards
delivering him to his pen.

“So what’s going to happen to me?”

“Shut up,” said one of the guards.

“You’ll be here temporarily until you’re
transported to the federal prison in Beaumont.”

“Lopez, you’re not supposed to talk to the
inmates.”

Nick Lopez knew that fact, as his boss,
Deputy Officer Jeanette Coleman, let him know on an almost daily
basis.

“Lopez,” she would say, “You’re a real
fuckup. You know that?” She was a real hardass—a bull dyke with a
blonde mullet sitting atop a freckled feminine face balanced on a
body built like a Sherman tank. (And it probably hadn’t done
anything to endear Lopez to Coleman when Lopez called her “sir” the
first time they met.) “Your duty list is never complete. Ever.
You’re never at your post during prisoner transitions. I really
need you to improve your internal review rank or I’m shit-canning
you. You hear me?”

Nick’s own home held no solace. His wife was
a constant nag.

“You can do better than being a security
guard for Travis County, Nick, and you know it.”

Evening dinners, on nights they even had a
chance to have one together as a family, usually degenerated into
discussions about how Nick could be making more income for the
house.

“Theresa, can we just eat dinner and talk
about something else?”

Their apartment was just off of IH-35 near
William Cannon. It wasn’t a bad location compared to the place on
Riverside where they used to live. The combination of college kids
and day laborers honking their horns at exactly six-thirty every
morning was not indicative of a place they wanted to raise their
young daughter—the same daughter who was now five years old and
seated at the same table he was getting an earful at.

“Let’s just be thankful for what we have,”
Nick would beg, attempting to disarm the assault.

“I
am
thankful, but you could be doing
a lot more.”

Laura Jane, his precious girl, sat in her
chair, scooping food from her bowl. She silently watched, anxious
at the negative energy resonating in the room. She could not
understand why her parents were yelling at each other; she just
wished it would stop.

The only solace he could find each and every
day was reading to his baby girl, his little princess, each night
before she went to bed. It was the perfect way to begin each night
shift at the jail, where he was now directing Hector Arana to his
cell.

The iron bars of the cell door clanked shut.
A small box on the front of the cell was unlocked, and Hector
placed his bonded wrists through the door. Nick began to unlock the
cuffs.

MIDNIGHT CONQUEST: Book 1 of the Bonded By Blood Vampire Chronicles by Arial Burnz
Bastard Prince by Beverley A. Murphy
Love In a Sunburnt Country by Jo Jackson King
The Coming Storm by Tracie Peterson
Riluo City (Blue Phoenix Book 1) by Tinalynge
Fat by Keene, James
The Deception by Chris Taylor
City of Bones by Michael Connelly
The Drifter by William W. Johnstone
Statistics for Dummies by Deborah Jean Rumsey
Our partner