Read Down Under Online 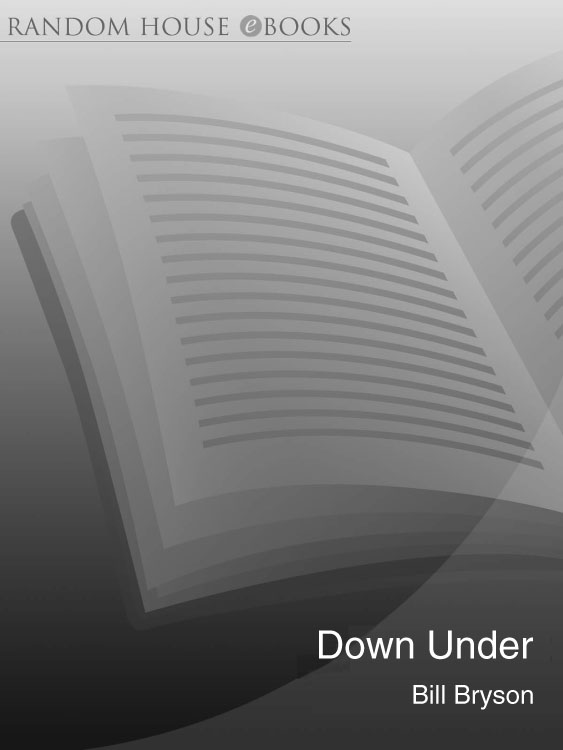 Bill Bryson has asserted his right under the Copyright, Designs and Patents Act 1988 to be identified as the author of this work.

This book is a work of non-fiction.

The Random House Group Limited supports The Forest Stewardship Council (FSC), the leading international forest certification organization All our titles that are printed on Greenpeace approved FSC certified paper carry the FSC logo. Our paper procurement policy can be found at: www.rbooks.co.uk/environment

Bill Bryson is one of the funniest writers alive. For the past two decades he has been entertaining readers with bravura displays of wit and wisdom. His first book,
The Lost Continent
, in which he put small town America under the microscope, was an instant classic of modern travel literature. Although he has returned to America many times since, never has he been more funny, more memorable, more acute than in his most recent book,
The Life and Times of the Thunderbolt Kid
, in which he revisits that most fecund of topics, his childhood. The trials and tribulations of growing up in 1950s America are all here. Des Moines, Iowa, is recreated as a backdrop to a golden age where everything was good for you, including DDT, cigarettes and nuclear fallout. This is as much a story about an almost forgotten, innocent America as it is about Bryson’s childhood. The past is a foreign country. They did things differently then . . .

Bill Bryson’s
bestselling travel books include
The Lost Continent, Notes from a Small Island, A Walk in the Woods
and
Down Under. A Short History of Nearly Everything
, was shortlisted for the Samuel Johnson Prize, and won the Aventis Prize for Science Books and the Descartes Science Communication Prize. His latest bestsellers are
Shakespeare
(in the Eminent Lives Series) and
The Life and Times of the Thunderbolt Kid.

To David, Felicity, Catherine and Sam

Among the many people to whom I am indebted for help in the preparation of this book, I wish to express particular thanks to Alan Howe and Carmel Egan for so generously sharing their time and hospitality even knowing that I was about to put them in one of my books; Deirdre Macken and Allan Sherwin for their astute observations and sporting participation in what follows; Patrick Gallagher of Allen & Unwin and Louise Burke of the Australian National University for the very generous and thoughtful provision of books and other research materials; and Juliet Rogers, Karen Reid, Maggie Hamilton and Katie Stackhouse of Random House Australia for their conscientious and ever-cheerful help.

Further afield, I am especially grateful to Professor Danny Blanchflower of Dartmouth College for much statistical assistance; my longtime friend and agent Carol Heaton; and the kindly, peerless talents at Transworld Publishers in London, among whom I must mention Marianne Velmans, Larry Finlay, Alison Tulett, Emma Dowson, Meg Cairns and Patrick Janson-Smith, who remains the best friend and mentor any writer could ask for. Above all, and as always, my profoundest thanks to my dear, patient, incomparable wife, Cynthia. 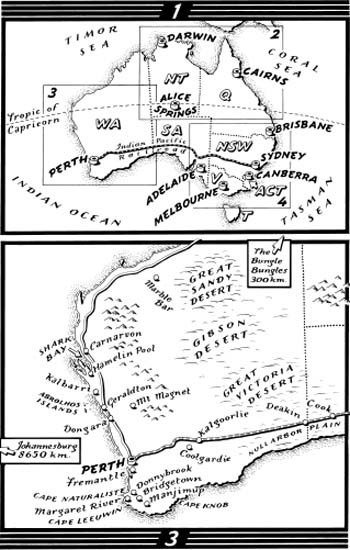 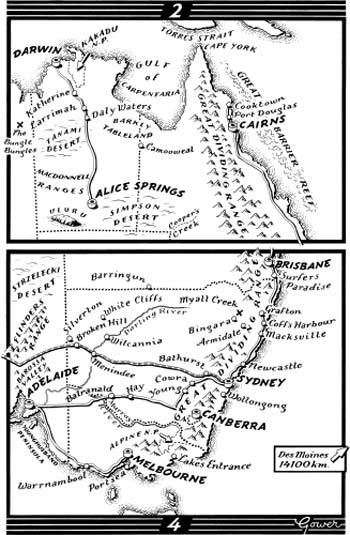 Part One
INTO THE OUTBACK

Flying into Australia, I realized with a sigh that I had forgotten again who their Prime Minister is. I am forever doing this with the Australian PM – committing the name to memory, forgetting it (generally more or less instantly), then feeling terribly guilty. My thinking is that there ought to be one person outside Australia who knows.

But then Australia is such a difficult country to keep track of. On my first visit, some years ago, I passed the time on the long flight from London reading a history of Australian politics in the twentieth century, wherein I encountered the startling fact that in 1967 the Prime Minister, Harold Holt, was strolling along a beach in Victoria when he plunged into the surf and vanished. No trace of the poor man was ever seen again. This seemed doubly astounding to me – first that Australia could just
lose
a Prime Minister (I mean, come on) and second that news of this had never reached me.

The fact is, of course, we pay shamefully scant attention to our dear cousins Down Under – though not entirely without reason, I suppose. Australia is, after all, mostly empty and a long way away. Its population, about 19 million, is small by world standards – China grows by a larger amount each year – and its place in the world economy is consequently peripheral; as an economic entity, it is about the same size as Illinois. From time to time it sends us useful things – opals, merino wool, Errol Flynn, the boomerang – but nothing we can’t actually do without. Above all, Australia doesn’t misbehave. It is stable and peaceful and good. It doesn’t have coups, recklessly overfish, arm disagreeable despots, grow coca in provocative quantities or throw its weight around in a brash and unseemly manner.

But even allowing for all this, our neglect of Australian affairs is curious. As you might expect, this is particularly noticeable when you are resident in America. Just before I set off on this trip I went to my local library in New Hampshire and looked up Australia in the
New York Times Index
to see how much it had engaged attention in my own country in recent years. I began with the 1997 volume for no other reason than that it was open on the table. In that year, across the full range of possible interests – politics, sport, travel, the coming Olympics in Sydney, food and wine, the arts, obituaries and so on – the
New York Times
ran 20 articles that were predominantly on or about Australian affairs. In the same period, for purposes of comparison, it found space for 120 articles on Peru, 150 or so on Albania and a similar number on Cambodia, more than 300 on each of the Koreas, and well over 500 on
Israel. As a place that attracted American interest Australia ranked about level with Belarus and Burundi. Among the general subjects that outstripped it were balloons and balloonists, the Church of Scientology, dogs (though not dog sledding), and Pamela Harriman, the former ambassador and socialite who died in February 1997, a calamity that evidently required recording twenty-two times in the
Times.
Put in the crudest terms, Australia was slightly more important to Americans in 1997 than bananas, but not nearly as important as ice cream.