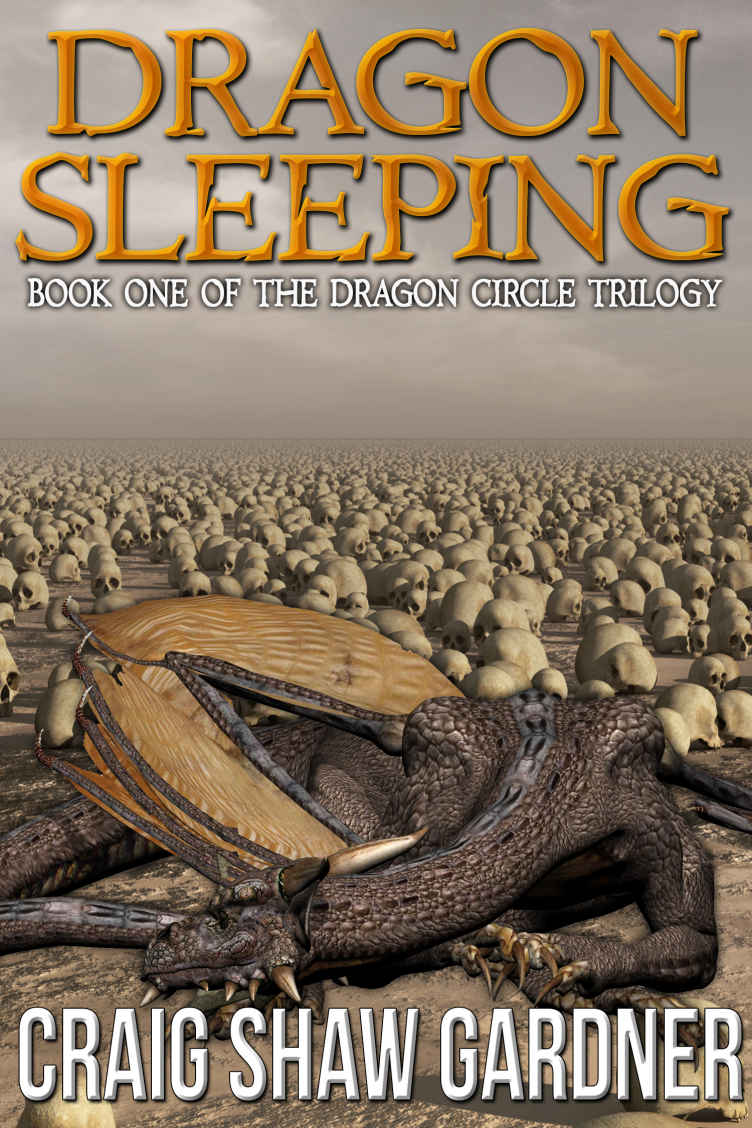 Book 1 of The Dragon Circle Trilogy

Mystique Press is an imprint of Crossroad Press

This eBook is licensed for your personal enjoyment only. This eBook may not be re-sold or given away to other people. If you would like to share this book with another person, please purchase an additional copy for each person you share it with. If you’re reading this book and did not purchase it, or it was not purchased for your use only, then you should return to the vendor of your choice and purchase your own copy. Thank you for respecting the hard work of this author.

Craig Shaw Gardner is the author of more than thirty novels and fifty-odd short stories (some of them very odd.) His novelization of BATMAN was a New York Times bestseller, and he’s a past president of the Horror Writers Association. He’s written reviews and articles for numerous periodicals, ranging from THE WASHINGTON POST to RAMPAGE WRESTLING, and (far more importantly) he serves as the perennial co-host (with Eric Van) of the “Kirk Polland Memorial Bad Prose Competition” every July at Readercon. He lives just north of the Center of the Universe (a.k.a. Cambridge, MA) with his wife and their two cats, George and Gracie.

Other Books by
Craig
Shaw Gardner

A Malady of Magicks

A Multitude of Monsters

A Night in the Netherhells

A Difficulty with Dwarves

An Excess of Enchantments

A Disagreement with Death

Slaves of the Volcano

God Bride of the Slime Monster

Revenge of the Fluffy Bunnies

A Bad Day for Ali Baba

The Changeling War (as by Peter Garrison)

A Purple Book of Peculiar Stories

A Cold Wind in July

Back to the Future Part II

Back to the Future Part III

Dark Whispers (as by Chris Blaine)

Check out our blog and

Subscribe to our Newsletter for the latest Crossroad Press News

Join our group at
Goodreads

We hope you enjoy this eBook and will seek out other books published by Crossroad Press. We strive to make our eBooks as free of errors as possible, but on occasion some make it into the final product. If you spot any problems, please contact us at
[email protected]
and notify us of what you found. We’ll make the necessary corrections and republish the book. We’ll also ensure you get the updated version of the eBook.

If you’d like to be notified of new Crossroad Press titles when they are published, please send an email to
[email protected]
and ask to be added to our mailing list.

If you have a moment, the author would appreciate you taking the time to leave a review for this book at whatever retailer’s site you purchased it from.

Thank you for your assistance and your support of the authors published by Crossroad Press.

This one’s for Kelly

D
eep beneath it all, the dragon slept.

Its jet scales had not seen the sun in so many years that people discounted stories of the creature. Old wives’ tales, they’d say. Ancient myths. But others could feel the dragon’s breath rumbling in their hearts. When they felt the earth move beneath their feet, they knew it was the dragon shifting in its slumber, and when the ground spouted fire, they knew the dragon was near to taking flight.

Still the dragon slept, within its home underground. The only light within that great cavern came when its eyes would flicker open, now and then, twin coals in the darkness that seemed to ask, “Is it time?”

The eyes opened more often now. The time would be soon. The dragon would arise again, as it had six times past, to destroy all before it.

And, as with every instance that the dragon slept, it grew, so it was always greater than the time before. Someday, on awaking, it would encompass all that is, and all that was, and all that might have been.

Its wings would darken the sky. Its talons would brush aside their weapons and crush their buildings. Most certainly, it would drink their blood. But the dragon would not be truly nourished until it fed on their souls.

The dragon slept, and the dragon dreamed. And in the dragon’s dream, where there once were earth and trees and homes and lives, there was nothing but fire.

But it would not sleep forever.

A Short Visit to the Islands

T
he lights had gone out. The needle on the record had stopped dead, before the Turtles could even claim they were “Happy Together.” Even the TV in the family room, his mother’s constant companion, was silent. It was the first waking moment since Nick could remember that wasn’t accompanied by the soft drone of news or comedies or quiz shows.

But it was more than just the power. When Nick Blake looked out the window, he saw that the storm had changed everything.

Not that it had been an ordinary storm. “A sudden summer hurricane,” the TV weatherman had called it, before the whole street had lost electricity. Eight hours of torrential rain and fantastic wind, and then it was over as quickly as it had begun, the last of the wind blowing the storm clouds out of the sky by the fading light of evening. He could see the first glimmering of stars overhead between leftover bits of puffy grey, and a band of brilliant crimson on the western horizon: a band so bright that it looked to Nick like the edge of the world was on fire.

As to the street itself, the storm had left things rearranged. The rain had washed everything clean, leaving the houses almost glowing in the last light of dusk. Most of the damage seemed to have come from the wind. A couple of the trees had lost big branches, one right across Chestnut Circle up where it joined Oak Street, as if the storm had declared their particular cul-de-sac off limits. An old oak was leaning at a crazy angle against the top of the Smith house, its roots and a substantial piece of attached ground exposed at the edge of the street, obliterating that part of the sidewalk and gutter where the gale had tossed them aside.

Tossed aside—like a giant pulling up a toothpick, Nick thought. A giant who came in the night, crying a hurricane’s worth of tears and rearranging the neighborhood with a single scuff of one huge shoe.

It was fantasies like that that made his father yell. “What are you going to do with your life?”

Nick never had an answer; at least no answer that didn’t come from his dreams. And his father didn’t like to hear that kind of answer.

“Nick! For Christ’s sake! You’ve got no plans for the real world.”

He never replied. He couldn’t even find his own voice when his father lectured him like that; his father looming larger and larger before him and Nick shrinking until he was hardly there at all.

“Your mother and I won’t be here forever. Why do I even bother talking to you? Are you ever going to amount to
anything?
”

It was at times like that that Nick wished his father would just leave. And three years ago, his father did exactly that.

He had divorced Nick’s mother a year later, and gone off to face the real world all by himself, leaving Nick and his mother and the house on Chestnut Circle behind.

Sometimes Nick wondered if he’d driven his father away. His mother insisted it was something between her and his dad, that Nick had nothing to do with it. Nick supposed that made sense; he’d seen the same thing happen to the parents of other kids at school. But no matter how much sense it made, it didn’t make the voice in the back of his head shut up; the voice that said Nick hadn’t been good enough; hadn’t lived up to expectations.

“You’ve let the team down.”

That was the sort of thing his father would say.

But his father, Nick thought, belonged to the time before the storm.

The time before the storm
. It might have been another of Nick’s flights of fancy, but somehow the words felt right. Looking over the five houses that made up Chestnut Circle, he could almost imagine them as part of some little village, miles away from the rest of the world.

Nick stared past the dark houses to the even darker fields beyond: the surrounding farmland that hadn’t yet become part of the subdivision. The trees out there appeared awfully close in the evening light, their silhouettes even darker than those of the houses before them.

The electricity seemed to be gone for miles. Nick couldn’t see another man-made light anywhere. But the brightness of the sky made up for any lack below. Instead of the usual dozen or so stars that might make their way past the streetlight glare, tonight Nick could see thousands of them, so that the darkness was almost overcome by these countless points of light, the stars clustered together like a great mass of wildflowers on the field of night.

Wild Abandon by Jeannine Colette
Explorers of Gor by John Norman
The Refuge by Kenneth Mackenzie
A Secret Identity by Gayle Roper
China Trade by S. J. Rozan
A New Haven Christmas by Angelique Voisen
Spring Will Be Ours by Sue Gee
The Hurricane by Howey, Hugh
Through the Cracks by Honey Brown
TROUBLE 2 by Kristina Weaver
Our partner