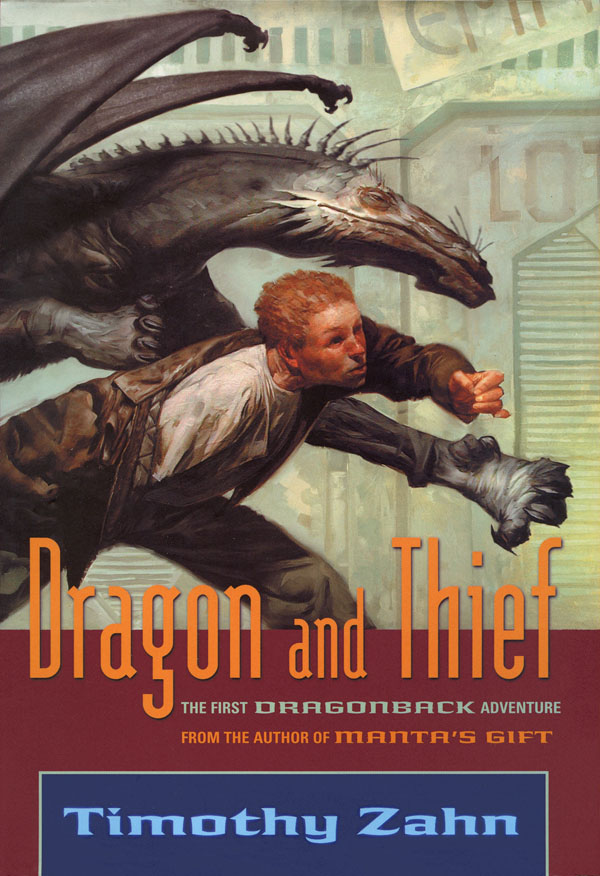 To my sister Carol,
who pointed Jack and Draycos
in the right direction

Draycos looked up from the systems monitor he'd been watching, his
ears swiveling upward toward the voice. Polphir, his Shontine host, was
halfway up the ladder to the
Havenseeker
's main navigation
bubble, looking quizzically down at him. "Come on where?" Draycos
called back. "We're here. We've arrived. Our job is over."

"Hardly, my good but lazy K'da," Polphir said dryly. "All the
long-range navigation may be finished, but we still have to
double-check the location of that planet down there. Come on, let's go."

"Very well, my good but slave-driving Shontin," Draycos replied.
Crouching low, gathering all four paws under him, he leaped over the
bank of monitors—and, incidentally, the two Shontine working at
them—and landed precisely at the foot of the ladder. He would have
preferred to jump directly to the navigation bubble and skip the climb
entirely, but there was another K'da crouched at the monitor station on
the lower bubble deck, and there wasn't enough room for Draycos to land
there without bowling her over. Wrapping his paws around the ladder's
side rails—only the Shontine used the ladder's rungs—he started up.

The
Havenseeker
was alive with activity and quiet
commotion today. Small wonder: after nearly two years in space, the
four bulky ships of the Shontine/K'da advance team had finally reached
their goal, the world known as Iota Klestis, and everyone aboard was
excited. Several times as Draycos made his way upward, one or the other
of his pointed ears twitched around as an odd noise or fragment of
conversation caught his attention.

Polphir was already in his seat at the wraparound control board,
working busily, when Draycos reached the bubble. For a moment he paused
at the top of the ladder, gazing out at the blue-green planet turning
slowly beneath them. An uninhabited world, or so their contacts in this
region of space had assured them. Uninhabited, and unwanted. Exactly
what they needed.

'
Twas night and blackness all around
:
K'da and Shontine held their ground
. . .

"You just going to sit there and daydream?" Polphir called over
his shoulder. "Or were you taking a moment to admire yourself?"

"And why not?" Draycos countered, arching his long neck as he
pretended to pose. "Have you ever seen a more handsome representative
of the K'da people?"

"If you think I'm going to answer a question like that in here,
you're crazy," Polphir told him, his voice rippling with good humor.
"Wait till we get down to the planet where I've got room to duck, then
ask me again."

"Never mind," Draycos said. In truth, he hadn't even noticed his
reflection in the smoothly curved plastic of the bubble until Polphir
made his comment. Now, though, he took a moment to focus on the image.

It wasn't a bad face, really, he decided. The long, triangular
head was mostly proportioned right, the glowing green eyes beneath the
bony protective ridges properly spaced. The spiny crest extending from
between the eyes over the top of his head and down his long back was
just about right, though perhaps a bit too narrow. His long muzzle with
its razor-sharp teeth was well shaped, though some of the teeth
themselves were a little crooked and his forked tongue stuck out a
little too far whenever he tasted the air. His scales were a decent
enough color, bright gold with red edges, though as a child he'd
secretly wished they'd been gray instead. The rest of his body wasn't
visible in the reflection, but he could picture it in his mind's eye:
the body long and sleek, as befit a K'da warrior, the whip-like tail a
little too short as it restlessly beat the air.

After two years, he decided, it would be good to feel ground
beneath his paws again. Turning to face Polphir's broad back, he
crouched and leaped.

His outstretched front paws touched the Shontin's bare shoulders
and flattened out, sliding along the skin in both directions along his
arms. As the rest of his body reached Polphir's, each part altered from
three-dimensional to two-dimensional form as it flowed onto his host's
body. A split second later the transformation was complete, leaving
Draycos stretched like a living tattoo across Polphir's back and legs
and arms.

"Anyway, I'm not sure I'd trust you to judge K'da beauty," he
added, sliding his now flat head along the skin of Polphir's shoulder
and around to his chest so that he could see the indicator lights
better. "And just for the record, I was neither daydreaming nor
admiring myself. If you must know, I was composing an epic poem about
our journey here, and the beginning of new hope for our peoples."

"Were you, now," Polphir said, working at his control board.

"Yes, indeed," Draycos assured him. He stretched his front legs
out and away from Polphir's arms, the limbs becoming three-dimensional
again as they left the Shontin's skin, and began punching in code on
his own set of control panels. "I was going to give you a good part in
it, too."

"I'm flattered," Polphir said. "Really. Okay, here we go. Can you
get the anterior star-fix going?"

"Thanks," Polphir said. "If I were you, though, I wouldn't go
writing up this voyage as a success just yet. I notice that no one
seems willing to give us a straight answer as to whether we're going to
be welcome here."

Draycos lifted his head from Polphir's shoulder, letting it become
three-dimensional again, for a better look at the proximity display.
Was that something flicking in and out at the very edge of the nav
sensor's range? "You worry too much," he said soothingly, laying his
head flat against Polphir's skin again and continuing to key in his
star-scan. "Why would anyone object to our using a planet no one else
seems to want? Especially when we're willing to pay for it."

"There are all sorts of reasons they might object," Polphir said.
"Refugees in general aren't always welcome, you know. They're even less
welcome when they've got enemies as dangerous as the Valahgua."

"The Valahgua will never find us," Draycos said firmly. "Not here."

Polphir shook his head. "I hope you're right."

"Spacecraft approaching," a Shontine voice called across the
control complex.

"Recognition signals," another voice put in, this one a K'da.
"It's our contact."

"I would say that confirms we've got the right planet," Polphir
remarked, hunching his shoulders as he stretched his arms forward over
the control board.

"Seems reasonable," Draycos agreed as he again lifted his head
from Polphir's skin and studied the main sensor display. "Iota
Klestis," he pronounced the syllables of the planet's alien name
carefully. "It has a certain rhythm to it."

"It
is
hard to find a good rhyme for," Draycos conceded.
There were four ships showing on the screen now, small and compact.
"Odd. None of them matches the profile of the ship the contact has used
before. At least, not according to probe team records."

"Hmm." Polphir abandoned his stretching and leaned closer to the
display. "You're right. You suppose one of the local governments
decided to send a welcoming committee?"

"Or came without him," Polphir said, his tone ominous. "Maybe this
planet isn't as unwanted as we were led to believe."

"Perhaps." Draycos rumbled in the back of his throat. "Still, they
do
have the correct recognition signal."

"Point," Polphir agreed, swiveling around to a different section
of the board. "Let's see if we can get a better look at them."

The image on the screen wavered, then came back sharper and
clearer. Draycos had just enough time to notice the oversized engines
and multiple weapons bubbles dotting their hulls—

And then, to his amazement, three of the bubbles on each of the
ships popped open in perfect unison, and twelve missiles streaked out
toward the Shontine/K'da ships.

"Alert!" someone shouted. "We're under attack!"

"All warriors, to your stations," the calmer voice of Shontine
Commander Chayd cut over the sudden pandemonium from the control
complex deck below. "Defensive response only. This may simply be a case
of mistaken identity. Comm station, talk to them—tell them who we are."

"We
are
talking," a K'da voice insisted as the ship began
to shudder with the firing of its defense missiles. "They're ignoring
us."

"Watch out—they're breaking formation," Polphir warned, leaning
close to stare out the bubble at the incoming ships. "They're splitting
up, one for each of us."

"Batteries, free fire," Chayd ordered. "Concentrate on crippling
their weapons. Maybe it's still not too late to talk some sense into
them."

Polphir clicked his tongue. "I don't like this, Draycos," he said
quietly. "Four of them; four of us. This isn't a chance meeting. They
were waiting for us."

"If they were, they didn't get the details very clear," Draycos
pointed out. "Missiles that size, against hull armor as thick as ours?
What do they think they're trying to prove?"

"And once they did know what they were up against, why split up
their firepower?" Polphir added. "Why not concentrate everything on one
ship at a time?"

"Or just turn and run?" Draycos said. "They're up to something,
Polphir. The question is, what?"

Polphir never had a chance to reply. Instead, the ship sweeping
toward them provided the answer. From a weapon bubble near its center
came a sickly-yellowish flash, and a slender cone of violet light
lanced out.

Draycos caught his breath, his mind refusing for that first awful
second to believe what he was seeing. Here, hundreds of light-years
from their beleaguered worlds, it was impossible that their enemy's
most terrifying weapon should be ignited against them.

Yet there it was: the all-too-familiar cone of writhing violet
light twisting its way toward the aft end of their ship. The weapon no
shielding could block, and that no living being could survive.

The weapon called simply the Death. "Evasive!" Chayd shouted. "All
ships!" But it was too late. As Draycos watched from his perch on
Polphir's back and shoulders he could see that there would be no chance
for any of them. All four attacking fighters had ignited the violet
beams now, focusing them on the sterns of their chosen colony ships.

And over the all-ship intercom, Draycos could hear the horrified
shouts, suddenly cut off, as the Shontine and K'da in the
Havenseeker
's
engine room were caught in the beam and died.

"Evasive!" the commander shouted again, his voice hard and
desperate.

A second later Draycos found himself grabbing for the grip bars at
the edge of the control panel as the
Havenseeker
twisted
downward out of the violet light sweeping slowly forward along the hull.

How their pilot had managed to coax a maneuver like that from such
a big, lumbering ship he couldn't imagine. It was clear their attacker
couldn't imagine it either, because for a few seconds the violet beam
burned harmlessly through space above the ship as its target dropped
out from under it. At the same time, a full salvo of missiles shot from
the
Havenseeker
's flank toward the fighter.

Bull Run by Paul Fleischman
The Costanzo Baby Secret by Catherine Spencer
Brody by Emma Lang
JAX (The Beckett Boys, Book Two) by Olivia Chase
That Touch of Ink by Vallere, Diane
Darkness & Discovery (The Bespelled Trilogy #2) by Larsen, A.L.
The Foolproof Cure for Cancer by Robert T. Jeschonek
Gotcha! by Fern Michaels
The Lies Have it (Sasha Jackson Mysteries) by Edmondson, Jill
The Thief by Megan Whalen Turner
Our partner